Trip up the Waterways - Day 1

We have been looking at a trip up the waterways into the center of the country since before we bought our boat. The main reason we decided to buy a boat was to travel and explore, not to sail. We have learned to love sailing, but travel is still our #1 objective. We just love to see new places and meet new people.

The waterway that we decided to use is the Mobile River going north from Mobile, Alabama, then turning on the Tombigbee. This will take us to Demopolis, Alabama. If you continue north on the Tombigbee to the Tenn-Tom Waterway you will end up at the Tennessee River. You can take the Tennessee upstream to around Chattanooga or downstream to Kentucky lake and then the Ohio River, which then joins with the Mississippi at Cairo, Illinois. The Tenn-Tom is man made and opened in 1984. It was the largest civil works project ever completed by the U.S. Army Corp of Engineers and 5 times longer than the Panama Canal. The main purpose for the project is to provide an alternative to the Mississippi River to move goods to and from the Gulf Coast to the center of the US.

The original plan was to take the boat all the way to Kentucky Lake (over 500 river miles), and we may do that some day, but this year we decided to just go 216 miles to Demopolis. The main reason to do this trip was to get the boat out of the Hurricane zone. We learned last year that we want no part of those things. The other reasons are an affordable place to leave the boat and take it out of the water to work on the bottom. We were also looking forward to the adventure. We knew this would be all motoring (or so we thought), and we were also going upstream. We were concerned about the current, but we could not find any information that told us exactly the speed. All we had was water levels at various places along the route. We were also very concerned about the Corona Virus situation. Both of us and our traveling partners had been fairly isolated for the past three weeks, but not completely. We would be very isolated on this trip and were concerned if we did get sick, we may not have access to healthcare, but being isolated may be better than being in a big city like Mobile. So, enough of the why's and what's, let's see what happened...

We left Turners Marina in Dog river on Monday, March 23. We were up early and were ready to leave before the sun was up. We stopped at Dog River Marina next door to pump out. That was quick and easy and we were on our way. We motored out into Mobile bay on a very calm morning.


We had just a few miles up the bay to the port of Mobile. We would be traveling right through the port and downtown area of the city. It was a very cool experience. 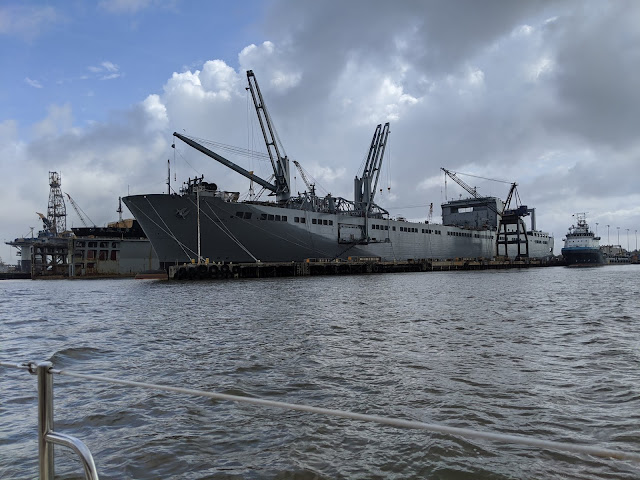 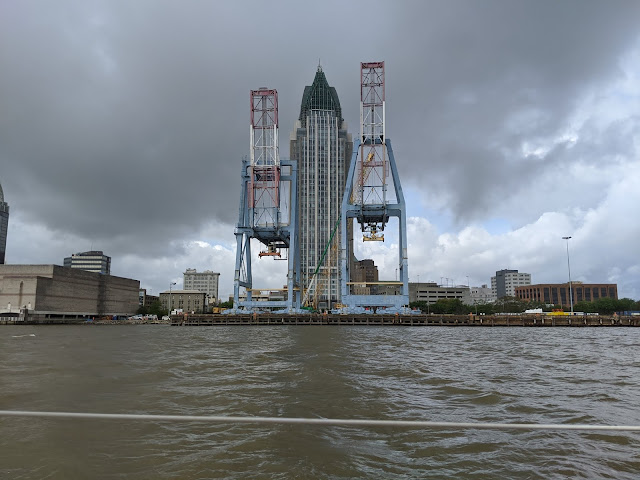 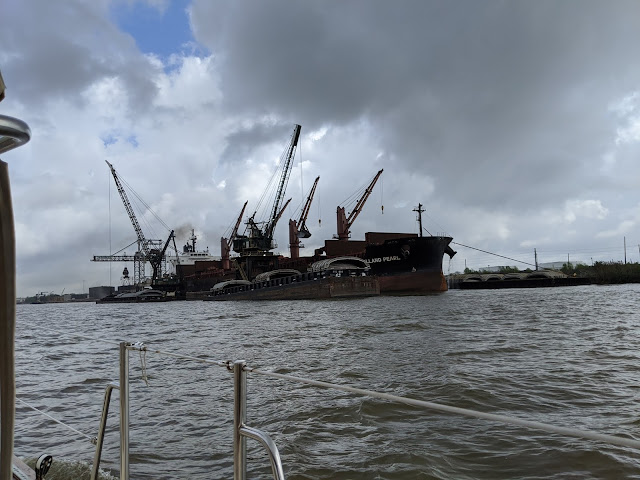 It was about 5 miles to get through downtown and the big docks. Then we went by a large barge anchorage. Then it was just us and the river. The wind had come up to about 10 knots and there was just swamp around us, so we unfurled our genoa and before long we were going more than 5 knots into a 2+ knot current.

We saw one large alligator sunning himself on a sandbar, but that was the only one we saw on the entire trip. No picture. Our plan was to only go up to mile 16.6. There was a good anchorage there and that gave us 27.7 miles for Day 1. This was a place called Big Bayou Cannot. It was a small river with some significant current. We dropped our main anchor and then our secondary anchor and tied it to the stern. This kept us clear of the narrow channel in the bayou. Our guide said we would have 7 feet of water. We had over 15 feet. No worry of running aground here.


The first day went well except the current was much stronger than we had hoped for. We were guessing it was 2 knots or better. We were able to average about 4.5 knots because we were able to sail part of it and we did close to 6 knots in the bay. It was clear that this would be an isolated, beautiful and slow trip. We had a number of river intersections in front of us and we had hope that the current would be less. I started studying the river levels and was now trying to predict the currents. We would see how that would go. The river had a historic flood 3 week earlier. The river was down significantly, but the water was still very high. That turned out to be a good and bad thing.

One other thing to note here was that I was seeing more steam coming from my exhaust than I had seen before. The engine temp was staying normal, but I was a bit concerned. In my next entry, we will continue up the river.

Posted by ktmissouri at 9:51 AM