Trip Down the Tombigbee River Day 2 and 3

We awoke on day two of our trip from Demopolis,  Alabama down the Tombigbee River to Mobile after a  restless night.  I  started out sleeping well, but then our anchor alarm went off.  It must have received a bad GPS coordinate, because we had not moved at all.  I pretty much laid there the rest of the night thinking about all that was left to come on this trip. We only had a couple of barges pass us during the night.

By 5 am I was done trying to get some sleep, so I got up and got ready to depart. We were moved down river in a light fog well before sunrise.

The fog quickly burned off and we had a beautiful day to travel.  We were hoping to make it to Okatuppa Creek at mile 124.

I had a friend send me this picture of us on day 2. I understand that he lives at mile 164 and posts images of passing boats on the internet.

Here are a few other shots we took on the cruise down the river: 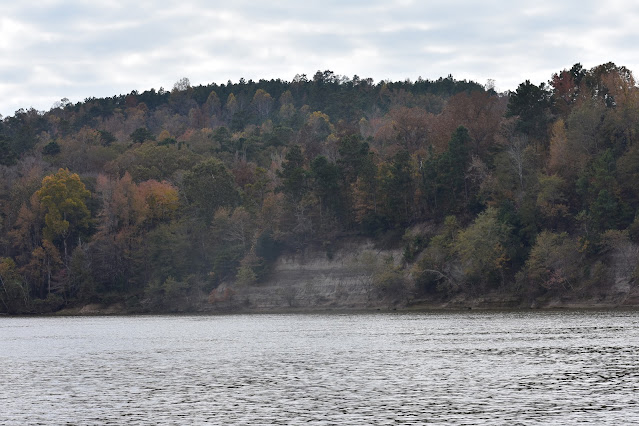 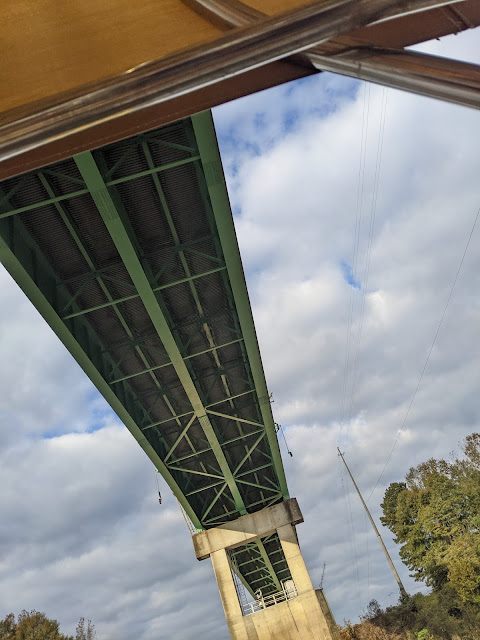 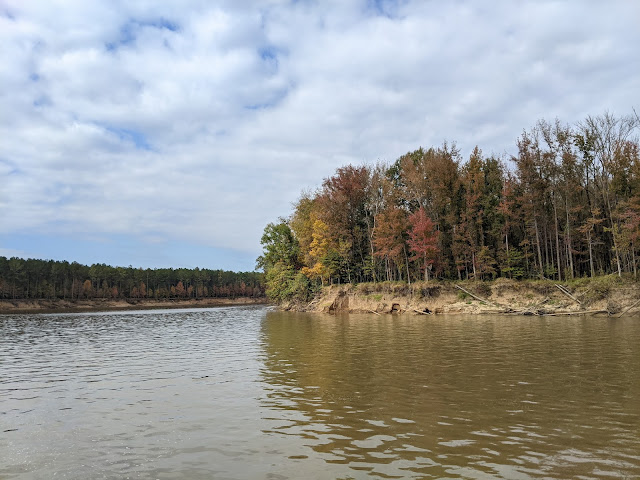 We saw lots of wildlife in this part of the river. I got the big camera out to take pictures of the many alligators we saw on the bank sunning themselves. We also saw Bald Eagles, Kingfishers and many other birds. It was a beautiful day. 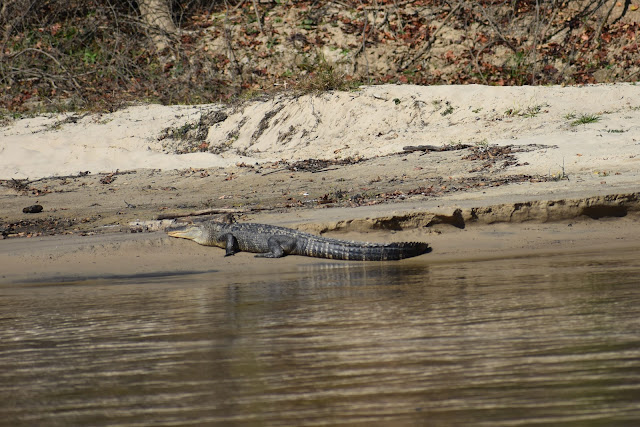 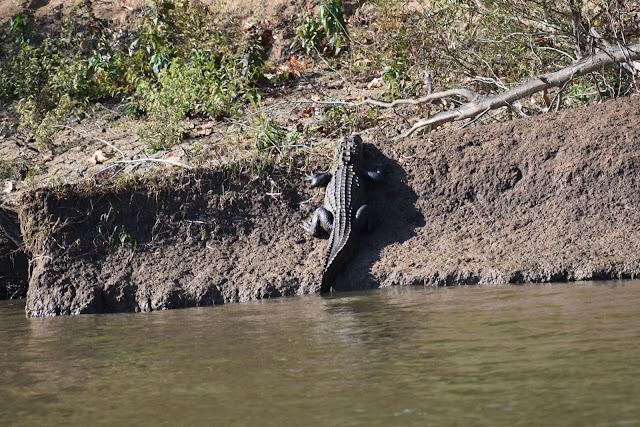 We made good time and were about 5 miles from our anchorage when we were passed by two of the boats that were with us the previous night.  As we approached,  we saw they once again had selected the same anchorage. It is pretty tight in Okatuppa Creek,  so we decided to try another spot just across the river. The alternate worked out perfectly. It was much easier to get set and we had no overhanging trees to be concerned about.

Another very large boat came in just after dark, but gave us plenty of room. He ran his very quiet generator all night, but his boat was lit up like a Christmas tree.  We had nothing to worry about with him there. Even so, I still didn't sleep well.

We were up and moving on day 3 at just after sunrise.  We had thick fog on the water,  but we needed to get about 8 miles down the river to the Coffeyville lock.  As we approached,  it became clear the lock chamber would be stuffed with boats.  We decided to wait and pulled into Bobby's fish camp that is two miles before the lock.  Bobby's is the only place from Demopolis to Mobile to get fuel.  I thought we could make it,  but I have enough things keeping me up at night.

Shortly after we we arrived I talked to the lock master and he told me it was going to be a while.  There were 3 tows coming through and commercial traffic gets preference.

As we left the anchorage that morning, I had noticed the bow lights were not working.  We have battery powered backups, but I took the time at Bobby's dock to try to fix it. It turns out it was a bad bulb. Kim dug through our spares and found a replacement. All fixed. That became important later in the day.

We finally cleared the lock at close to 11 am. 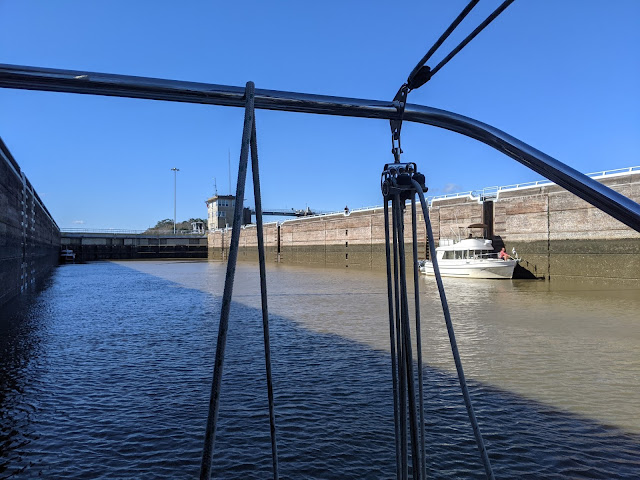 There was no way we could make our planned anchorage at 63, but we should be able to make it to our bailout, called Sunflower Bar at 78. We put the hammer down and tried to make 6+ knots. Ok, go ahead and laugh power boaters.

Our batteries have been doing ok, but not great. We have 4, 6 year old AGM batteries. We do everything we can do to minimize amp draw when we shut the engine down for the day, but we have to run refrigeration. While the engine is running we can do whatever we want.  Showers require us to run the water pump that uses significant juice. So, have you ever taken a shower in a moving vehicle? Yep, day 3 was shower day while motoring down the river.

We were doing well until we came to a railroad bridge at mile 90. The bridge closed just before we got there and did not reopen for over an hour.  I tried to anchor there for the night, but couldn't get the anchor to hold. When the bridge finally opened,  we went even faster.  Now up to a whopping 6.6 knots.  The computer was saying if we maintained that speed we would arrive a half hour passed sunset. I hate to arrive at a new to us anchorage in the dark. We had our now working bow light making us visible and legal as we motored along. As the sun went down,  a beautiful bright full moon rose. We could actually see pretty well as we anchored on the right descending bank in Upper Sunflower West in 10 feet of water. I was happy to shut it down for the night. The new engine really did it's job.

We were shocked about an hour later, when a boat we had met in Demopolis arrived at our anchorage. I talked to David on the radio to help him find a safe place.

We were just 30 feet behind a green bouy that marks the channel.  Kim stood watch while I tried to get some sleep. It was another restless night as we monitored the radio and alerted passing tows to our presence.

We were now 140 miles down the river and only 78 to Mobile bay. We were watching some incoming weather and I was feeling pretty tired. Come back for my next entry, where we continue our trip down the river.

Posted by ktmissouri at 5:32 AM