This is the Life That we Dreamed of

When we first started this sailboat adventure, we had visions of what it would be like. The reality has been much different. We have days here and there that are great. And then we have days of boat work and problem solving that can leave us wishing for an easier way of life.

Starting on the morning of Sunday, December 5, we experienced a week of the life we have been hoping for since the beginning. I will try to describe what that was like.

We got up Sunday morning to a quiet anchorage. I knew that the forecast was for some wind from the North East in the first part of the day and then dying off to nothing for the next week. We were up early and got the anchor up before sunrise. We had an easy 2.5 mile cruise to Venice. The bridge opening even went perfectly. There was no boat traffic at this early hour. We headed out the inlet and waived to all of the fishermen on the breakwaters. As soon as we hit the gulf we had the sails up and had about 10 knots of perfect wind. We had one of those perfect sails for the first 25 miles. We made that trip in about 5 hours. The wind died off just as we approached the Boca Grande Inlet. Which is perfect, because that inlet can be crazy if you get wind opposing the strong current. The current was even in our favor, so we zipped through at close to 7 knots.

We then made a turn to starboard and went in to our favorite anchorage (so far), Pelican Bay (Cayo Costa State Park). There were over 30 boats in the bay at anchor on this nice and sunny Sunday afternoon, but we had no problem finding a place to get the hook down.

When we arrived we noticed that a boat right in front of us was a familiar boat. It was Dave on Maximon. We had last seen Dave in the river at Sunflower Bar. I got the dinghy down and installed the motor. I took a trip over to talk to Dave. He has had a difficult trip, but he was preparing to depart to Key West the following morning.

We awoke the following morning to heavy fog. 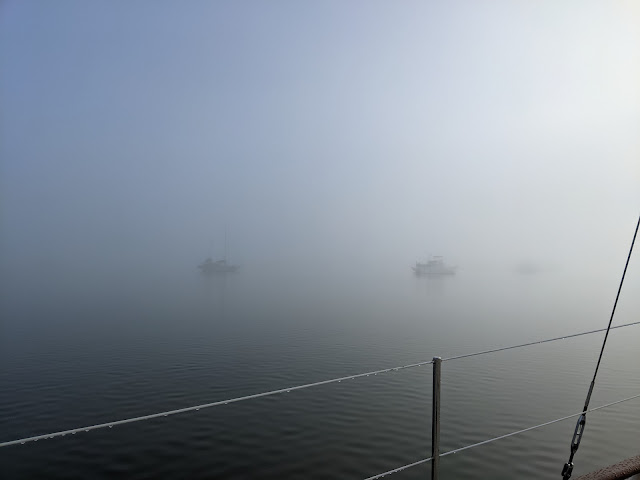 We waited for the fog to burn off enough to go to shore. It was a short 100 yard ride and we were at the park headquarters. We paid our $2 per day per person fee for 5 days. We were able to use the bathrooms and then take a tram ride across the island to the beach. 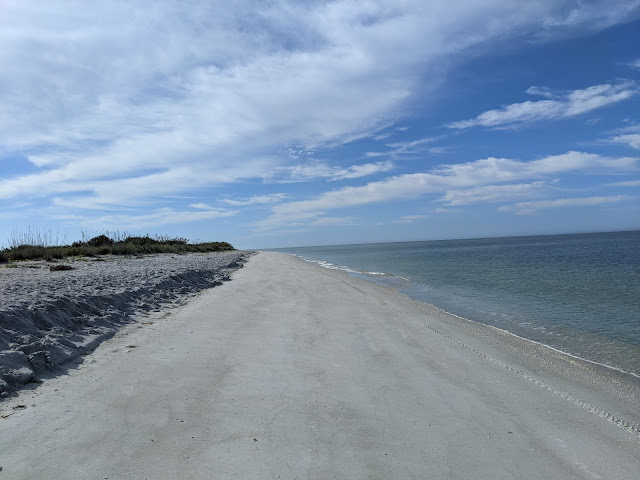 This quickly became our daily routine. We would get up have a lazy breakfast and then head to shore to use the bathroom and then either take the tram or walk the .4 miles to the beach. Then we would walk on the beach for a couple of miles and then get back to the boat for lunch and a lazy afternoon. Then eat an early dinner and then I would do some fishing and then a quiet night for sleeping. We just put that on repeat for 7 days. We loved it.

We also got out for some dinghy adventures. We found a little lake surrounded by mangroves. We saw some manatees and an alligator.

We had one awesome sunset after another. 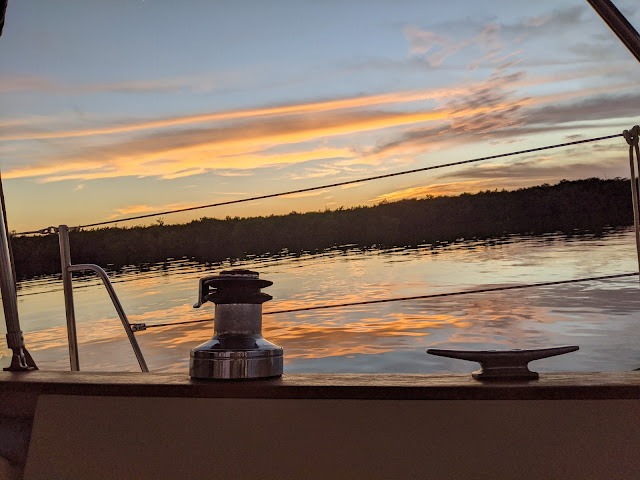 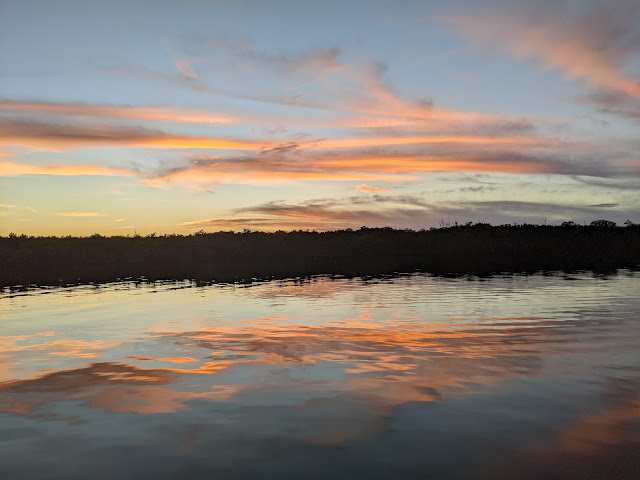 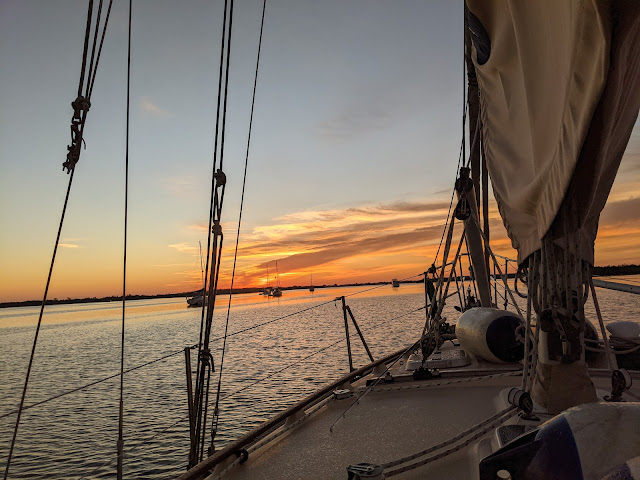 We did find some amazing shells on the beach including these "arrowhead sand dollars". 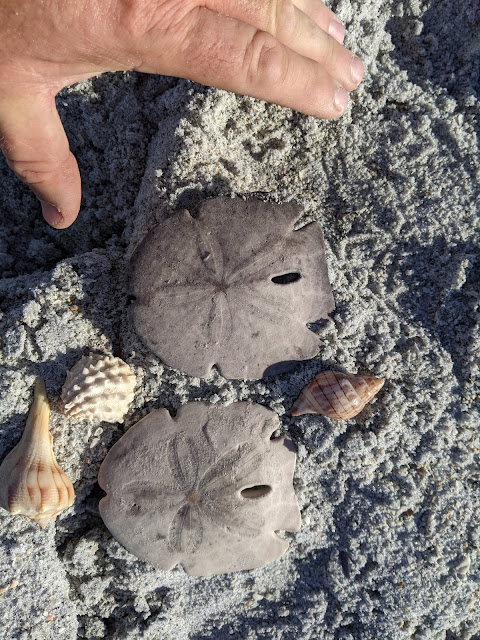 We really enjoyed our time at Pelican Bay, but we had a deadline that caused us to move on. We needed to get some things done on the domestic side (laundry) and get the boat ready to leave for a little over three weeks. We decided to get a slip at Burnt Store Marina for 4 nights to get ready. It was a short 13 mile trip to Burnt Store. It is a nice marina, but we were right next to the restaurant that had a live band each night. The good news is that they were playing music I like and we enjoyed sitting out in cockpit each evening to listen to the band.

It was then on the 16th of December that we sailed up Charlotte Harbor to the maze of canals that is much of Punta Gorda, Florida. We had arranged to leave our boat behind a private house while we were gone. In my next entry, I will pick this story up from there. To say it did not turn out as we hoped, would be an understatement.

Posted by ktmissouri at 3:25 PM