We left Miles Hammock on November 18. We enjoyed our rest day. Kim spent some time reading and I caught up on the blog and did routine maintenance on the boat. The weather was good, but kind of cool.

First up was a cut that required my full attention. The area around the New River is known for shoaling and it can get shallow in a hurry. The good news is we have some good tracks that are published by another boater. Almost all of the boats on the ICW use the Bob423 tracks and I have come to rely on them in the shallow areas. Kim has the track on our Navionics app on my phone and I am looking at the chart plotter and tablet. She can tell when we need to deviate from the center of the channel and just guides me through. We make a pretty good team.

We motored on for 35 nautical miles to Wrightsville Beach. The only complication on the day was the bridge at Wrightsville. It opens only on the top of the hour. We did a poor job with our timing and had to wait about 30 minutes for the bridge. We did get lucky when a work barge was coming through and the bridge tender opened about 10 minutes early and let us through also.

When we arrived at Wrightsville we anchored in the large anchorage. It was now about 2 pm and we had a mission to complete before dark (5pm). We had an empty propane bottle and I did not know how much was in the other one, because I had been using it for the grill. We got the dinghy down and used the hoist to install the outboard motor. It is a kind of complicated process, but we are getting better at it each time we do it.


The following day we decided to take a much shorter walk to the beach and go out for lunch. We were a bit sore from our forced march the previous night.

We had a nice lunch at a Mexican restaurant and went back to the boat to get prepared for our travel on the following day. We liked Wrightsville Beach and certainly would use it as an alternative to Carolina Beach that is only about 10 miles further south. Carolina Beach does have a mooring field, but it is currently closed for repairs.
We were up early on November 20th to head a bit further south. We had heard about a small town dock in Holden Beach. It was just about the prefect mileage, so I called and got reservations for 2 nights. We pulled the anchor, just as the sun was rising and got moving. We cruised along the ICW for about 10 miles against the current to Carolina Beach. Then we turned to go through the cut that takes you out to the open water of the Beaufort Inlet. The current that was against us was now with us and about 2 knots. We also had wind behind us at about 10 knots. I unfurled the Genoa and shut off the engine. We had a great 10 mile sail down the inlet. We averaged about 7 knots with no motor. Yeah!
After those great 10 miles, we had to furl the sail and turn on the motor and head down the ICW again. It was only about 12 miles to Holden beach. When we arrived there were two boats already on the dock on this Sunday. I called one of them on the radio and one of them quickly moved to a dock across the ICW. The guy on the other boat helped us dock and we hooked up power for only the second time on this trip. It was cold (about 45 degrees F), so Kim turned on the little electric heater.
The following morning, I went to the town hall to pay for the dock space. When I told them what had happened, they told me that we were supposed to be the only boat on the dock. It is sad that some people are always trying to cheat their way through life. 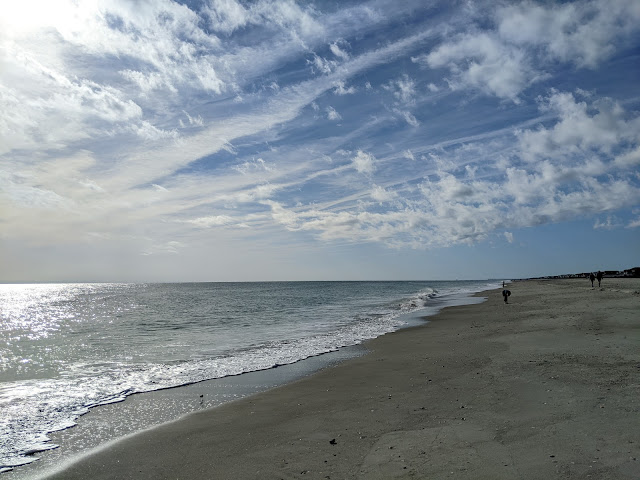 We enjoyed out time so much in Holden Beach that we decided to stay an extra night making it three nights. We were once again watching a weather system that would impact our plans, but first we had Thanksgiving to celebrate. In my next entry, I will write about our Thanksgiving and what we would do to stay safe.
Posted by ktmissouri at 3:14 PM