I am writing this on May 3. We are still at Bottomless Lakes SP near Roswell, NM. At this point, the weather looks good for a move east on Friday. I am more caught up on this blog than I have been in a long time. I guess that means we have not been as busy doing notable things and I have had more time to write. I would say that for the past few weeks, we are living exactly the way we like it.

We left Datil Well campground on April 26. We really liked the campground, but were ready to move on. We picked out another BLM campground in the Fort Stanton - Snowy River Cave National Conservation Area. The NCA is about 20 miles north of Ruidoso, New Mexico. The drive was a little over 160 miles. The drive had a couple of notable sights. The first was the Very Large Array (VLA) just a few miles east of Datil. The Karl G. Jansky Very Large Array is a centimeter-wavelength radio astronomy observatory. We chose not to stop at the visitor center. 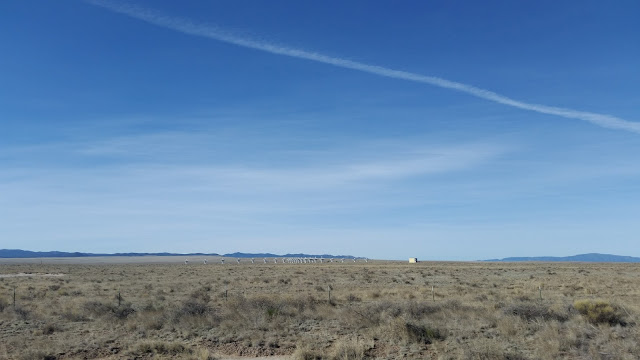 The next interesting thing we saw was a large lava flow near the town of Carrizozo. This flow is part of the Valley of Fires State Park. This looks like a very cool place. We will have to stop for a few days the next time we are in the area. For now, I just stopped and took a few pictures of the lava flow. 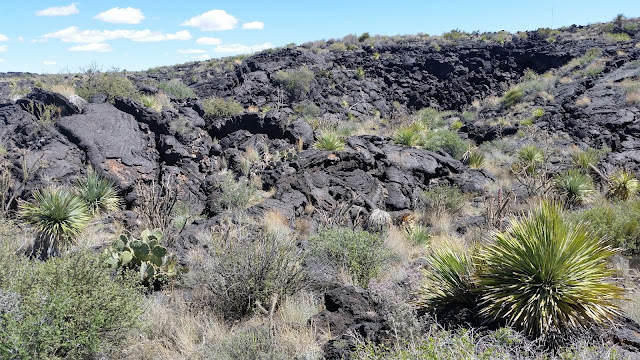 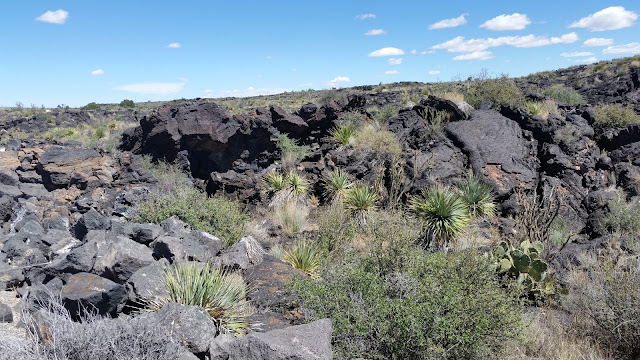 The drive was fairly uneventful and we arrived safely at Fort Stanton. 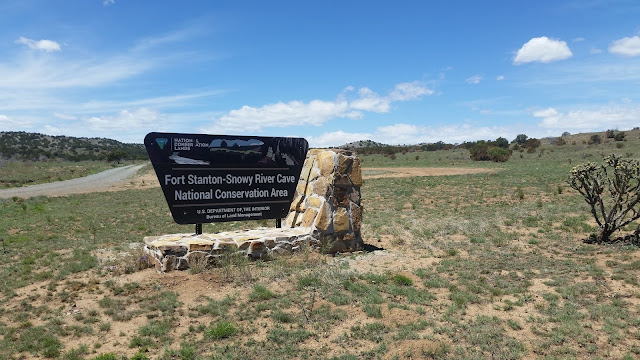 There are many places to boondock on the NCA property, but we opted to say in the only campground. We had seen the forecast for much colder weather and the possibility of a small amount of snow. The campground was at about 6700 feet in elevation. The campground is free to boondock, but charges $5 for water and $5 for electric per night. That is very reasonable, but the strange thing is the dump station costs $15. That is pretty expensive. We had 2 bars of 4G and 3 OTA TV channels. Most of the time we were there, it was just us and three other rigs. It was very quiet and we had a nice view out the back window of the surrounding mountains. 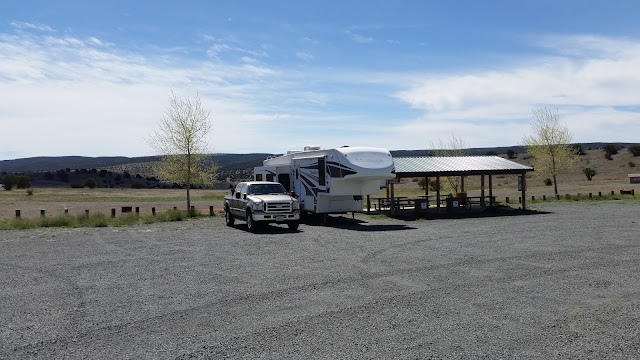 One reason we stopped in the area was to hit a Walgreens in Ruidoso. They had prescriptions for both Kim and I. We made a loop drive south of the campground and by Fort Stanton. We decided we would visit the fort during our visit to the area. We then drove on to Ruidoso. On the return trip we took a dirt road up into the NCA and saw many good boondocking sites.

The next morning, I decided to take a hike on one of the many trails that lead out of the campground. This is an equestrian area and many are lightly used horse trails. I selected the Kit Carson loop. It was a nice trail that went up to the top of the surrounding hills and then returned back along a dry wash back to the camp area. 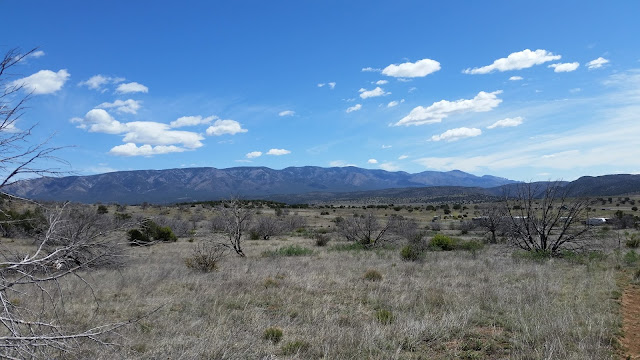 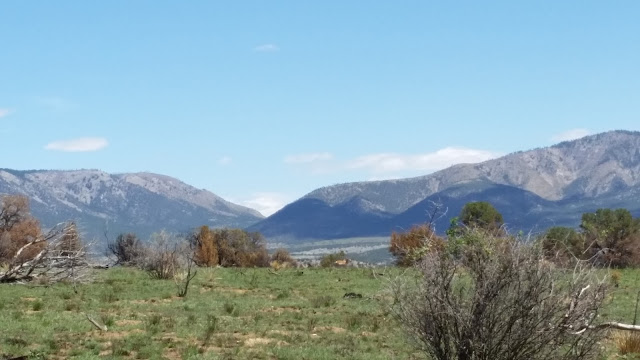 It was a very good hike. I ended up walking a little short of 4 miles and never saw another person. I did see 6 pronghorn antelope. They are in that last shot, but my camera does not do a good job with that type of shot.

The following day we went to take the tour of the Fort Stanton. This fort has been in almost continual use since 1855. Most of it has been updated over the years. They are in the process of restoring parts of the fort to how it looked in 1855. Most is empty and looking pretty sad. I did enjoy seeing some of the bare walls which showed the original construction. 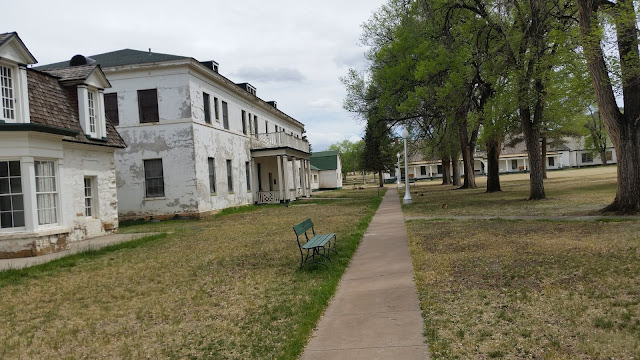 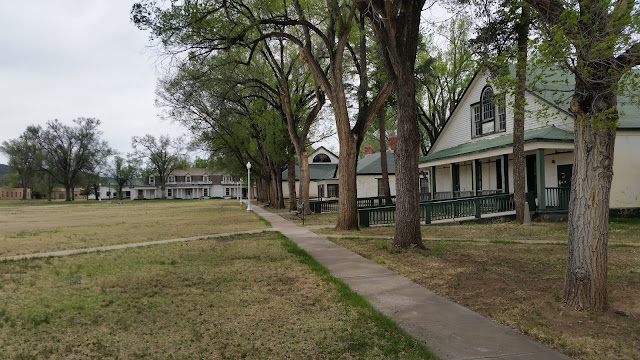 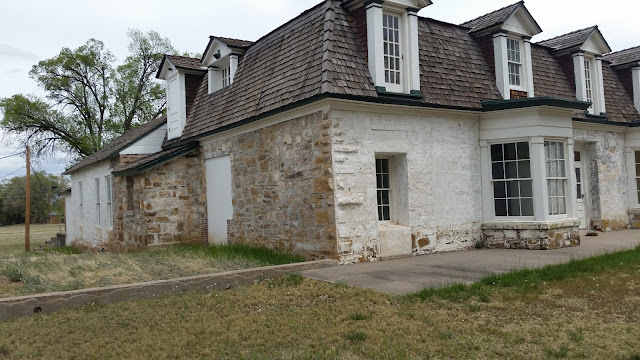 There is also a cemetery on the grounds that is being turned into a Veterans Cemetery. It looks like it is going to be very nice.

There is also a very large cave on the NCA, but it is only open to serious cavers and requires a permit to explore.

The snow and wind came as predicted on Saturday April 29. The cool thing for me is that one of the 3 TV channels I got was FOX. Supercross was being broadcast for 4 hours on Saturday. What great luck. That is what I did all day. I did not even get dressed. I think that is a first for all of the time we have been on the road. 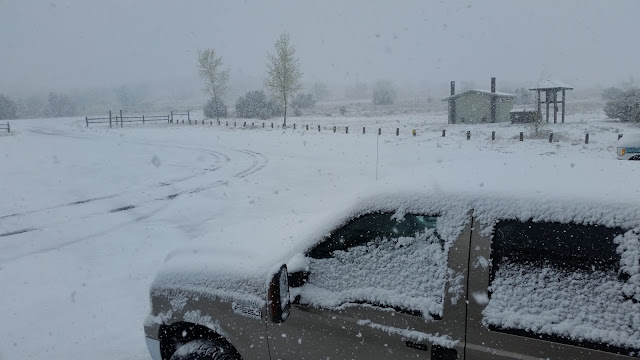 While it snowed, we had these swallows trying to find a place to get out of the snow on the side of the trailer. They could actually hold on to the slick side of the trailer and enjoy the protection of the rolled up awning. We ended up getting about 5 inches of snow,  most of it was gone the next day. 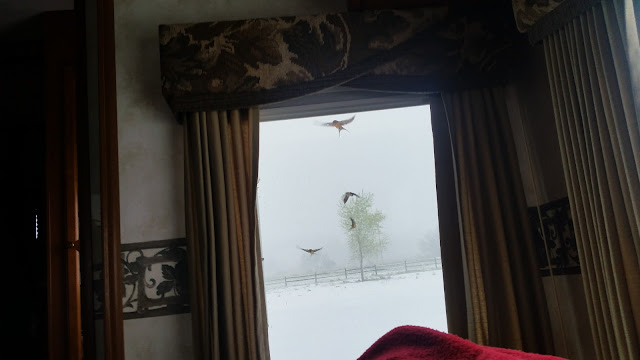 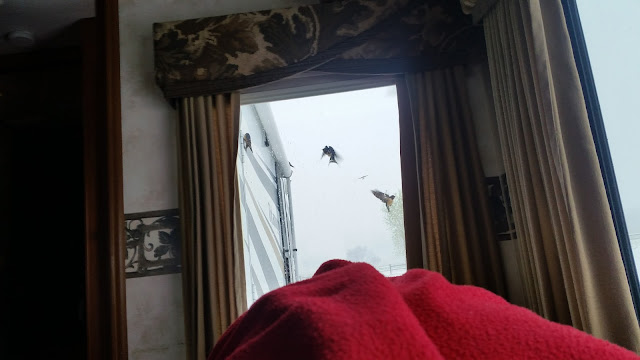 We stayed at Fort Stanton until Monday May 1. From there we drove the 80 miles to where we are now. Wow! I am caught up.

I will write a bit more about Bottomless Lakes SP in my next entry.
Posted by ktmissouri at 4:31 PM