We left Demopolis on November 18. I wrote about our first day in my last entry and this one will pick up with day 2.

We had a very quiet night at our first anchorage. There was not even a whisper of wind. The bad news about that is that we awoke to thick fog. We had to stay in place for a while to give us any visibility. The good news is that with today's electronics, we could see any approaching tows and they could see us on AIS. We also know our GPS position exactly, so we did not have to worry about getting run down. The other thing is no boats move in this stuff, so we all just sat and waited it out for about an hour after daylight. 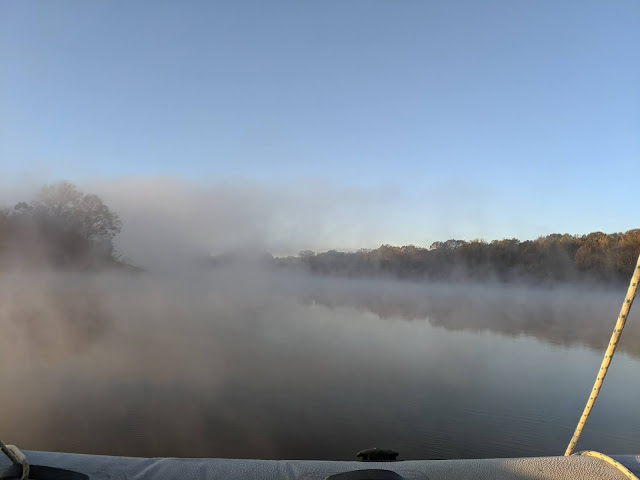 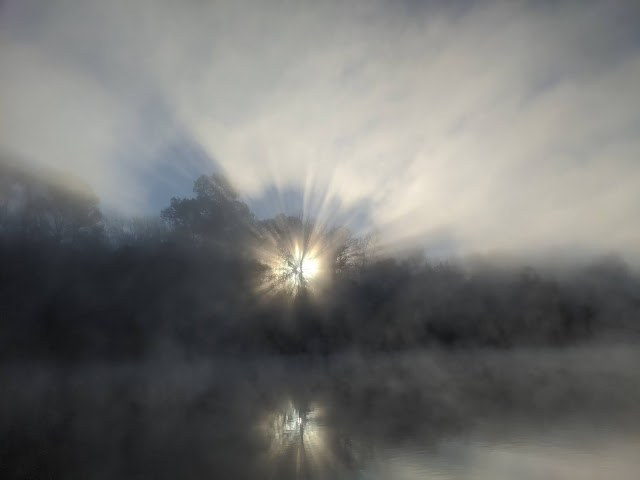 I like the way a few of those fog shots came out. I knew we had a long way to go that day, so I was eager to get moving. By about 7 am, I felt it was safe to get moving. We cruised along at about 3.5 knots for the first half hour and then suddenly the fog was gone and we were back up to our full speed of 6 knots. The interesting thing is that "Elizabeth" came out behind us and stayed with us all day. Normally a trawler goes about 8 knots and I was expecting they would pass us, but they never did.

We had a very calm and uneventful day. We passed a number of tows, but the river got wider making that very easy.

We cruised along and checked out a number of anchorages along the way. I am taking notes for future reference. The anchorages will change a great deal depending on the level of the water.

We had chosen a stop at mile 123 called Okatuppa Creek. We had spent two nights at this anchorage back in March and we loved it. I think it was better this time. We cruised right in and set both our bow anchor and a stern anchor to keep us against the bank in 8 feet of water. We did have a couple of fishermen come by, but other than that, it was beautiful and calm and quiet. Just after we got anchored, Elizabeth hailed us on the VHF and asked if there was room for them. We said sure and they dropped their hook at the mouth of the small creek.

We were now only 7 miles north of the second lock at Coffeeville, Alabama.
We were up early again and had some fog, but much less than the previous day. We were able to get underway before sunrise and begin our 7 mile cruise to the lock. Just as we left, we noticed that "Elizabeth" was coming with us again. We were then hailed by a boat at Bobby's Fish camp, that is at mile 118. They saw us on AIS and asked if we wanted to join them in the lock. I said yes and thank you. We waited a short time for the lock tender to get the lock set for us and then proceeded in. Just as we were coming in we saw a beautiful bald eagle sitting on the top edge of the lock, but sadly did not get a picture.

Passing through the lock without too much delay was critical to our plan for the day. We were going to try to make it our longest day at 59 river miles. Our stop for the night was Three Rivers lake at mile 64. The problem was that the last anchorage before that was 10 miles up river, so we had to make a decision at that point.
At mile 100, we came to Old Lock One. This is the anchorage that we spent 4 nights waiting for flood waters to pass during our trip up the river in March. We were told that there normally is no way for us to get into the small lake. You can see why in the picture below. The lines on the grass to the left of the small creek indicates the higher water levels in the spring.
We cruised along to our decision point at river mile 75. By my calculations, we could make Three Rivers with about an hour of daylight to spare. For reasons we don't know, Elizabeth decided to hold at that point and we never saw her again on this trip. We kind of felt bad we never met those folks, but it was nice having them along anyway. We made Three Rivers without issue and cruised down the 1/4 mile very narrow creek to a small lake and anchored in 14 feet of water. All was good until two boats came by and warned us that the next day was opening day of Duck season and we were right in the middle of one of their favorite spots. I told them we would be out of here and first light and they were good with that.
I did not sleep well that night worrying about the duck hunters, but as it turned out, I did not have anything to worry about. I will write about the rest of our trip down the river in my next entry.

Posted by ktmissouri at 8:43 AM