I hate to let people worry, so I will just tell you now that we are safe and sound in Gulfport, Mississippi. Now, what it took to get us here...well, you will have to read the next few entries of the blog to find out.

We have been working on the boat and planning our departure from Demopolis since our arrival on October 9th. Now that the hurricanes have finally quieted down and the boat is ready, we were ready to head down the river. We chose Wednesday, November 18th as our departure day. I joined a captains meeting on the night before to discuss the trip with other boats that were departing on the same day. Most of these boats are doing the "Great Loop". Demopolis is a stop on the loop and this is the time of year most people are on this section. We have been seeing them come and go for weeks. We were the only slow moving sailboat in our departure group, so I thought it was going to be a solitary trip. We had a boat buddy for the trip north back in March, and that gives you some piece of mind while traveling the 218 miles to Mobile. There are no real services for the entire stretch, except a small place called Bobby's Fish Camp at mile 118, that has a small dock with fuel and water. We did not plan on stopping on this trip at Bobby's. $1.50 per foot seems a bit much for very limited services. We love the piece and quit of this river anyway.

The first thing to think about on this trip is the lock at Demopolis. That is at Mile 216, just 2 miles from the marina. I was nominated to contact the lock on behalf of the other boats that were leaving. They didn't answer the phone, so I finally reached them on the VHF and they said come on down. So, I did not have much time to get nervous, we had to leave now! We fired up the engine and got the electric disconnected and before long we were exiting the Kingfisher Bay Marina, our home since April 1. I can not say enough kind things about Fred and Kim the owners, and the staff. We did have one issue with the dockmaster, but she worked hard over the past few months to mend that fence.

The other boats with us are big power boats including the Lucky Lucky, a 60 footer. All of the other captains were great to talk to. Here are a few shots of us riding the lock down. This lock is about 42 feet.

We left the lock and the other boats headed down river in front of us. As we left the lock we got this nice look at the water going over the dam. It is low water, but it is still flowing.

It wasn't long before we were alone on the river. The motor rumbled along and never missed a beat. I decided to run the engine at 2100 RPM. That is lower than what is recommended, but we had a nice 1 knot current behind us and I really wanted to take it easy on the engine. We cruised along about 5.8 knots over ground.  I added a grand total of 1 quart of oil for the entire trip. I have learned that if you fill the motor to the full line it will push a quart out the overflow. The good news is that I think the engine is good to go for now.

As we cruised along the river I saw a Tow on my AIS a few miles in front of us. The strange part is that it was not moving and in the middle of the channel. As we approached, I called them on the VHF and talked to the captain. He was in the process of trying to push some barges that were stuck on a shoal. He asked us to hold for a few minutes, which of course we did, and he told us when it was safe to go by. We had to stay close, but it all went smoothly. 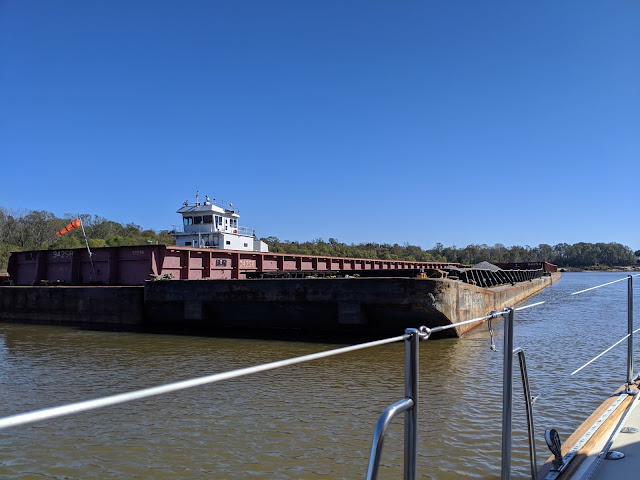 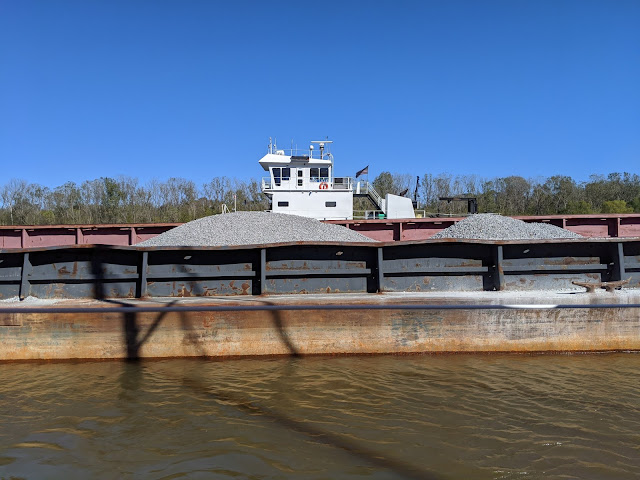 We cruised down the river for mile after mile. It was a cool morning at around 40 degrees. With our dodger open for better visibility, the wind coming in off of the water is very cool. We dress in layers. The vest I am wearing was a gift from a fellow boater the day before we left. Mr. Wright said it was too small for him. I ended up wearing it much of the trip and was glad I had it. I do most of the driving, but Kim can handle the boat just fine and takes her turn at the helm.

We had a plan to make the first day a short day. We wanted to set ourselves up for the rest of our planned stops and the take it easy on the first day. We pulled into a wide spot on the river at mile 177 about 1 pm. We dropped the anchor in 13 feet of water well outside the channel. About two hours later another boat came in to our anchorage. The "Elizabeth" came in a dropped anchor. She is a nice trawler and we expected she would move in front of us the following morning. They normally run at about 8 knots. 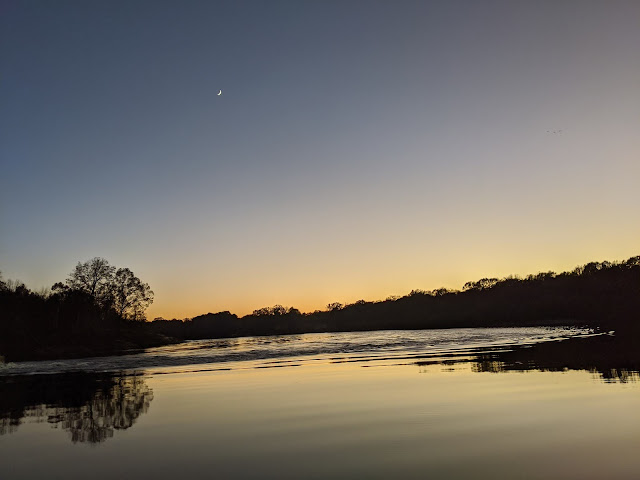 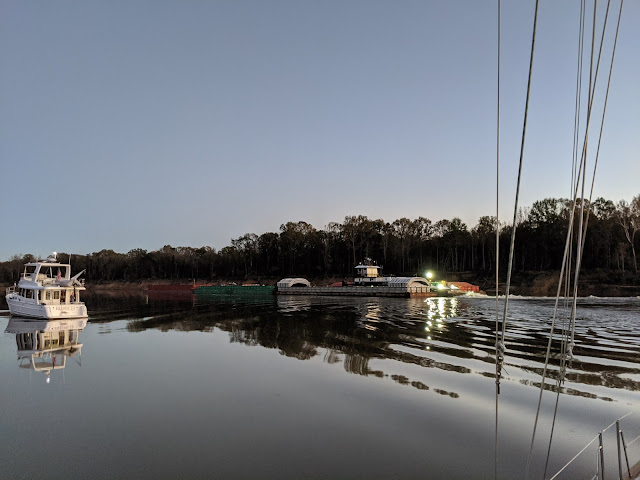 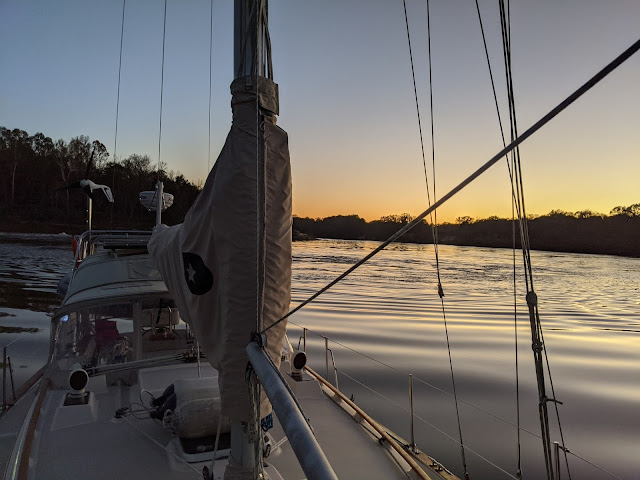 So that is how our first day on the river ended. We slept well in a beautiful place. The next morning served up a new challenge. We knew we had a long day in front of us, so it was not welcome. In my next entry, I will write about day 2.

Posted by ktmissouri at 1:57 PM