We got to bed early on November 23rd after arriving at Dog River Marina on the west side of Mobile Bay. We were planning to do a 75 mile trip to Gulfport, Mississippi the next day. 75 miles does not sound like a long day to most people, but to a sailor, it is a long way for a late fall day. You can generally count on making about 5 knots on average on most long sails. That works out to 60 nautical miles in 12 hours. The daylight this time of year is only about 11.5 hours. If we had any chance of arriving in daylight, we would have to leave as early as possible and we would have to average better than 5 knots.

The channel leading out of Dog River is very narrow and shallow. If you get out of the channel, even our 4.5 foot draft boat will run aground. The good news is that I had a good GPS track on my chart plotter from the trip in the previous day. We were underway at the first hint of sunlight. It was not long before I had plenty of light to see what we were doing. It was a beautiful clear morning with a nice 10 to 15 knot breeze out of the East.

We motored out the channel for about an hour and then were able to turn due south and head to the mouth of Mobile Bay. The wind was just a little forward of the beam, which is exactly where SHIFT likes it. Kim took the helm and I raised the mainsail and the unfurled both the genoa and the staysail. It was a glorious feeling ripping along at close to 7 knots under full sail.

We had to stay in the shipping channel because much of the rest of this part of the bay is too shallow. The only problem is that many fishing vessels were trawling in the main channel, so we had to work our way around them. While we were in the bay we heard continual warnings from the Coast Guard of a 40 foot sperm whale that was causing a navigational hazard in the bay. The sad thing is the next day they had to euthanize the whale.

Once we cleared the fishing boats we were quickly to the head of the bay and took a turn to starboard to head for the Dauphin Island Bridge. We kicked on the motor for a short time to improve our maneuverability. After clearing the bridge we had a long straight shot down the Mississippi Sound. It was not long before the channel opened up and we could shut off the motor. The winds were now a bit lighter and we slowed to about 5 knots. I decided that we needed to try to improve our speed, so I went to the foredeck to rig the new whisker pole. While doing this we were surrounded by a large pod of dolphins. Kim tried and tried to get a good picture. A few came out well. 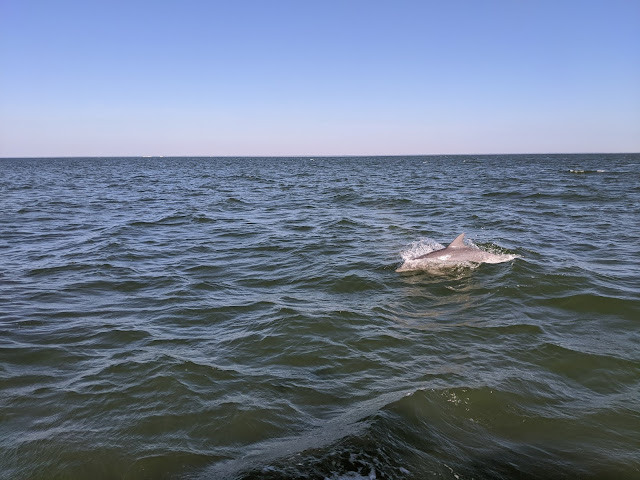 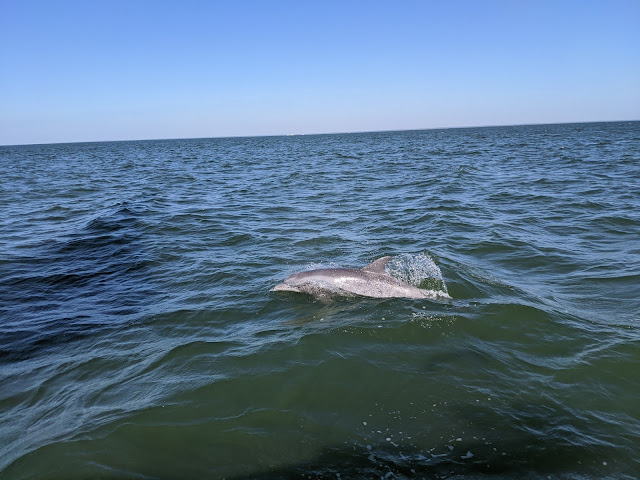 It was during this time that she lost focus on her first priority and almost ran into a channel marker. Scary, but the good news is that we did not hit it and we both learned a very important lesson that I am sure will stick.

We sailed on from there all afternoon averaging about 5.5 knots. It was very pleasant and we just decided to keep the motor off and prepare for a night arrival into Gulfport. We had come into this harbor at night 2 years ago when we chartered a boat out of this marina. We went for a sunset cruise and I was at the helm as we came in under the watchful eye of Captain Jim King of Northstar Sailing. He gave me some navigational keys for this harbor and I luckily remember stuff like that. I was confident we could make it . Kim called the marina and got a slip number and detailed directions that we hopefully could follow in the dark.

I dropped the mainsail before sunset and we motor sailed with the Genoa to make our best speed. We had no issues running along the coast in the dark. We saw a few fishing boats, but there was very little traffic. We approached the channel it was about 7 pm. The good news is we had some moonlight. We dropped all sails and motored into the marina. Kim used our high power search light to spot the channel markers for me. The only problem was that the wind picked up to about 20 knots just as we came into the harbor. This marina has good protection from waves, but nothing to stop wind. We had to approach our slip in the dark. The bad news is that there are just pilings on one side and a fixed dock on the other. As luck would have it, our dock was upwind. So, as we approached, the wind was blowing us off the dock. Did I mention it was pitch dark! I tried twice, but Kim could not get a line on the dock before I got blown off. I escaped each time with no damage to the port side of the boat. The slip next door was available, so we just went in there and let the wind blow us on the dock. We tied up for the night and called it good.

We awoke the next morning to our beautiful new home. I can't wait to explore all around this area. We went to the office to check in and then with the light winds we moved into Slip 4-57. Our home for a while. How long? We have no idea.

In my next entry, we will begin our exploration of this area of the Gulf coast. So far it looks pretty nice, but we do have some weather coming in.