Sail out to Ship Island

When we first arrived in Gulfport, we knew we wanted to sail out to the barrier islands that make up the gulf side of the Mississippi Sound. We had sailed along them on our trip to Gulfport from Mobile, and they looked beautiful. We have made a number of day sails out to the water around the islands, but the conditions have never been right to drop the hook and spend the night.

We have been warned by many sailors in the marina that the islands can be treacherous. They offer no protection from the wind and waves other than a south wind. I have been waiting for warmer weather, good wind during the day that would drop off overnight, and out of the south. The forecast for March 12th and 13th, was for exactly those conditions. The only problem is that Ship Island is directly SE of Gulfport. That was the direction of the wind, which meant we could not sail directly there. We would have to make a number of tacks to get to our target.

We left the marina at 10AM. I almost made a major mistake as we left, by getting in a hurry and missing a major item on my checklist. I forgot to open the raw water through hull that provides cooling water to the engine. I caught it in time and all was OK, but it still bothered me all day that I would make such a significant mistake. I have since added some additional safeguards to reduce the chance that I would make such a mistake again.

As soon as we were in open water, we had the sails up and headed out in the direction of Cat Island. The wind was strong at about 15 knots and we were moving at 6-7 knots under full sails. We made it to Cat island in less than 2 hours. That anchorage looked a bit rolly with the strong wind, so we tacked and headed in the direction of Biloxi. That was a long leg at over 2 hours and almost 15 miles. The conditions were perfect. That is when I recorded the first part of the video below:

Click this link to see a short video about our trip: Sail to Ship Island

Sometimes video just captures the scene better, but here are a few shots of our sail:

As we approached the beach in Biloxi, we could see people on the beach and tell what brand of car was on Beach Blvd.. We then made another tack and headed back SW. We sailed all the way out the pass between Cat and Ship island into the open Gulf of Mexico. We then tacked back two more short ones and then motored the last half mile to the anchorage. The wind was dying off throughout the afternoon, so the anchorage was reasonably calm. We dropped the hook in 24 feet of water and settled in for the night.

We had the anchorage all to ourselves as we settled in for the sunset. Just as the sun was going down a catamaran joined us, but dropped the hook a good distance down the beach. 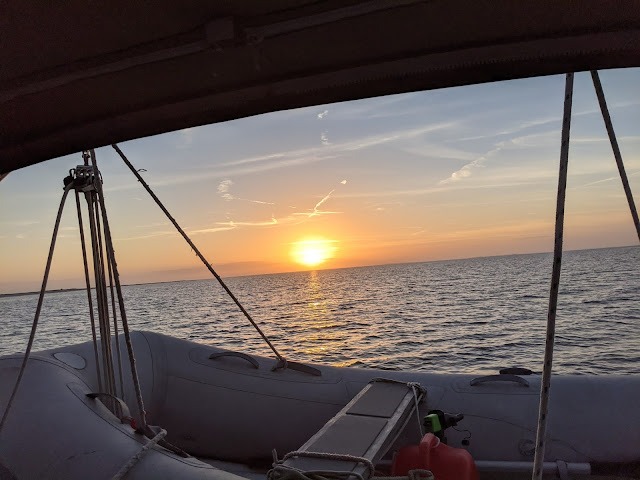 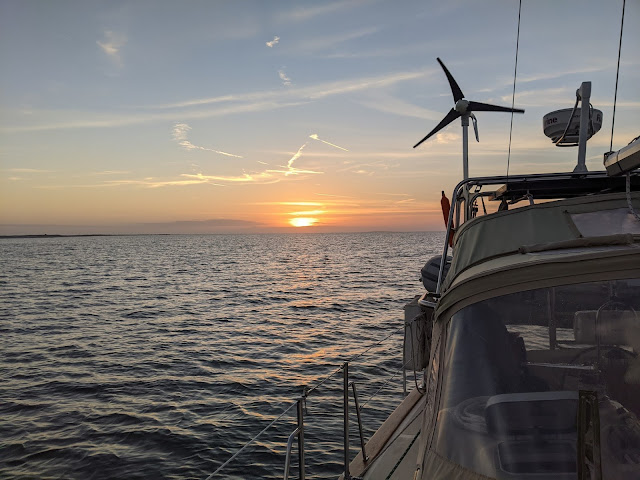 The wind died of to nothing as forecast. We had a very restful night. When we awoke the next morning, we were in a thick fog. It was so thick we could not see the island or pier.
Around 9 am the fog lifted enough for us to get the dinghy down and put the motor on and make the short trip to shore. It has been since last summer that we had used the dinghy, but I have done the maintenance and it ran perfectly.


There is a significant amount of infrastructure on this island. There are bathrooms and rangers quarters and even a snack bar. All were damaged by hurricane Zeta. The strange thing is there is no work going on to repair the damage in preparation for the coming summer season. I am not sure what is going on, I plan to do some research to better understand why.
There is a boardwalk across the island to the gulf side beach. Much of the walkway was destroyed, but previous visitors have found planks and laid them across the supports to make it possible to visit the beach. We all know that one of the main objectives was for Kim to take a walk on the beach. On this day we had the beach all to ourselves. It was foggy, but still beautiful.

We went back to the boat and I fished for a couple of hours. I caught 4 fish, but all Gaftop Sail Catfish, which I don't eat. It was then about 1 PM and even though the wind was still light, we pulled the anchor and started our sail back to Gulfport. The good news is the light wind was right behind us for a downwind sail back to the marina. As we went, the wind picked up a bit and we had a fun sail until the fog rolled in. At one point we could not see more than 100 yards. I was able to use by instruments to make the approach. We made the channel in the dense fog and felt our way to our slip. As luck would have it, a half hour after arrival the visibility was about 5 miles. All in all it was a great trip and we can't wait to go back out see some of the other islands. The problem will be waiting for the perfect forecast.
We have had a warm week here in Gulfport with some highs in the low 80's, but last night that all changed. We had a strong line of thunderstorms hit us at about 9 pm with 45 knot gusts. It reinforced our thinking that we don't want to be out of the marina when the storms are around. That will influence our plans over the next few months. In my next entry, I will talk about our plans.

Posted by ktmissouri at 6:17 PM