Surviving a Polar Vortex on a Sailboat

It has been a few weeks since I have written in this blog. To say I have been uninspired, would be an understatement. I have always said that I never wanted to feel like this was a "job", so when I don't feel like writing, I don't.

As we all know, the week of February 8, 2021 was one for the record books. It was record setting in coastal Mississippi also, but it was very mild in comparison. We saw the coldest recorded temperatures in over 100 years. My family reported power outages in Texas that lasted a few days while temperatures were in single digits. There was snow on the beach in Galveston. It was colder than minus 10 degrees F in Missouri at the ranch where pipes burst and created quite a mess. The good news is that our son Scott was there to shut off the pump and then fix the pipes.

We only saw one night that got down to 20 degrees. The marina staff opened all of the water spigots at each slip, so we had some icicles, but that is the only ice we had. Gulfport was one of the few places in the country, other than Florida, that had no snow or ice. We have a small electric heater that kept us nice and warm during the worst of it. We never lost power. SHIFT did fine and has no issues as long as we keep it warm inside.

I did not have any problem keeping busy during the cold snap. We were still testing the new holding tank with just fresh water when I found that the system was leaking. I spent two days taking the tank back out and replacing the fittings with brass and using a different pipe thread compound. While I was doing that, I tried to evacuate the water in the tank with our macerator pump. Well, the pump did not work. I did some troubleshooting and determined the pump was bad. The good news is we have a brand new spare. In the process of installing the new one, I found a bad hose and clamp that could have burst and leaked a nasty mixture into the boat. I think SHIFT was just trying to tell me that I wasn't done fixing her yet.

Since this refix, all seems to be good and we now are using it again. Boat life...

After the cold front passed we were eager to find a day to go sailing. The forecast for February 22nd was for sunny conditions with 65 degrees and wind of 10 to 15 knots out of the NW. We tossed off the dock lines and headed out into the sound. We put up the sails and then as we rounded the end of the jetty, BAM! we got hit by 20 knots and gusts over 25. Hello! oh well, it is always good to get some heavy weather sailing practice in. We furled the Genoa and sailed on the Main and staysail. SHIFT was in her element. It was a comfortable ride. We stayed out there for about 5 hours enjoying the fast ride and sunny day. The cool thing about sailing here on the Mississippi sound is even with the strong wind,  there were flat seas.

One of my favorite activities when we are not working on our own boat is walking around the docks checking out the other boats and talking to other boaters. There is a very special boat that is sitting about 100 feet from ours. She is a 1929 Red Banks. She was made in New Jersey and was originally a passenger carrying boat around the bays there. We have met the owners and they are in the process of varnishing the exterior, which looks like a monumental task, but it is so cool to see her survive and be cared for. 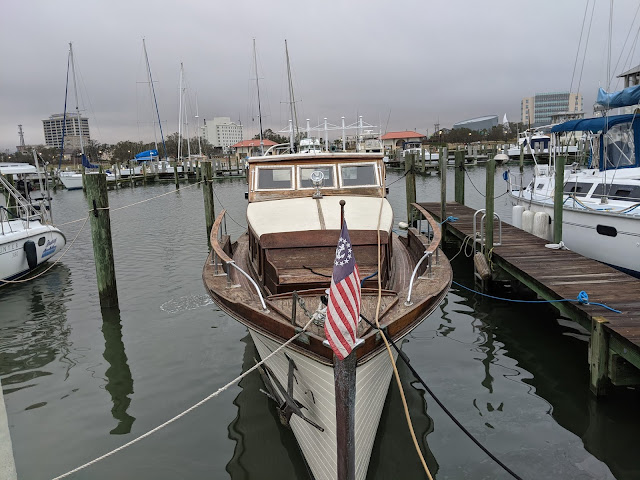 It is now March and we are ready to really step up the sailing and adventurizing around this area. We had one of our best sails ever this past Sunday. I will tell you why it was so awesome, in my next entry. Maybe it will not be a month from now.