Family Time in the DFW area

We arrived at Cleburne SP on December 31. We chose Cleburne SP because it is fairly close to my brothers house in Granbury and is still out in the country away from all of the hustle and bustle of the DFW Metroplex. The longer I am retired and the more we travel, the more we dislike major cities. We were able to drive from Daingerfield SP and only touch the far southeast area of Dallas on the drive in.

After arrival, we headed over to my brothers house to see Alan and Denise and my Mom and Dad. The two National Championship Semifinal Football games were on and we enjoyed watching them together. Too bad they were not competitive games. We toasted midnight at 11 central. We left at halftime of the final bowl game of the night between TCU and Oregon. The score was 31-0 Oregon. TCU came back to win. Darn I hate it when I miss those kind of games. I continue to battle my addiction to football. Having the networks decide that those games would be on cable only does help me understand it is all about the money.

On Friday, January 1 we went over to see Kim's family in Bedford. We had a nice visit and enjoyed catching up with everybody. THEN... Kim for some reason decided to bring up a controversial subject and let's just say the conversation became lively, Yeah that this the word for it "Lively". I wonder if we are getting more opinionated. Has this lifestyle done that? I would say we read more and are more educated on the history of the country.

There is a significant controversy that I read about the other day. It has to do with the process of text book approval in Texas. It seems that some conservative people in Texas would like to "forget" the facts of history. I am sure the same thing happens in other states with more liberal thinking people. My only point is let's get it right and learn from history.

On January 2, we went back to Alan and Denise's house. This time we were joined by my brother Brian and his wife Julie and their two very impressive children, Matthew and Katherine. Also joining the family gathering were Alan's daughter Erin and husband Tim. Brian started off by making a very exciting announcement. He is leaving his current law firm and joining a very large firm. He will have an office on the 43rd floor of one of the high rises in downtown Dallas. Congrats Brian! I am so proud of you. Here is a shot of Brian, Julie and Mom and Dad. 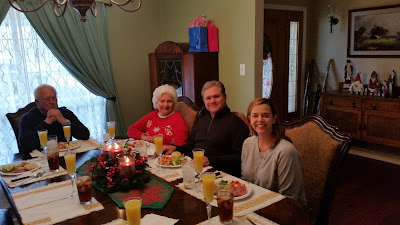 We had a very enjoyable day.

On Sunday, January 3, we went to church in Glen Rose and then returned to the campground. I decided to take the boat out on the lake in the SP and do some fishing. It was a beautiful sunny day. 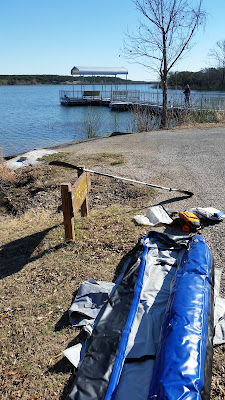 This was the first time that I have taken out the boat by myself. Kim wanted to catch up on some reading and I wanted to see how the boat handled with me sitting in the center. It was a bit more difficult to get set up and launched by myself, but I managed. 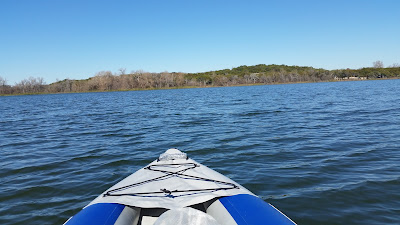 I had a great time paddling around the lake. It was a bit windy, so I stuck to the north end of the lake and fished along the edge. I did not catch anything, but that was just fine with me. I saw a bunch of cormorants and vultures perched up in a tree. 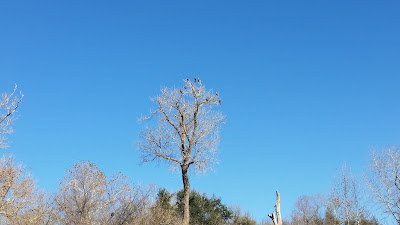 Here is a shot of some turtles on a log. I hope you get the idea, it was just a very relaxing day. 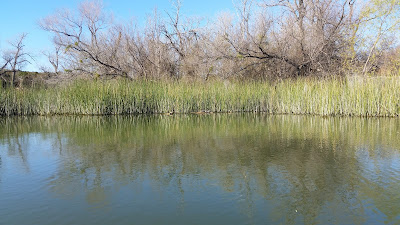 We finished off our time in the DFW area by visiting Kim's parents again on Monday. It was just us and them and we had a very enjoyable conversation covering many of the topics that had been covered the other night with a little less emotion. We had an early dinner at our favorite local Mexican restaurant and really enjoyed the time together.

I am a bit strange. I like to discuss controversial and difficult subjects. I enjoy getting other perspectives and I learn a great deal that way. In this very emotionally charged political time it makes sense to me to discuss with an open mind and a friendly spirit. A closed mind will only cause further division.

We left the Cleburne SP on January 5. I had planned to go to a SP just about 100 miles away. Then in mid drive we changed plans. I am so glad we did. Why? I will tell that story in my next entry. I think I have found one of my all time favorite camp sites.