I am sorry it has been a while since my last post, We have been very busy over the New Years visiting with family. I will get caught up over the next few entries.

We finally got headed south on Tuesday, December 29. We woke to freezing temps and our first snow of the year. Thankfully it was just a trace and after making a trip to town to check the road conditions, we decided that we could leave safely. We were watching the weather closely and the reports coming out of Oklahoma were concerning. The central part of the state had snow and it was unclear what the conditions along highway 69 were. The forecast for Tuesday was around freezing. We noticed that the weather in Arkansas was about 10 degrees warmer. We decided to go straight south from Mansfield and then over to Highway 65. We got a late start to wait for the weather to get a bit warmer. We had an easy trip with no adverse road conditions.

By the time we got to I 40, the temps had increased to over 45 degrees. We were watching the time and decided that we could only make it to Maumelle Park before dark, which is right on the Arkansas River by Little Rock. We do not like to park in the dark. We have determined by previous experience, that we do not do well when trying to set up in the dark.

When we arrived, we were told that the river was rising, but it would be 3 days before the river would be flooding the river side campsites. We did not choose a riverside campsite, but we were just across the road. I decided to put a stick in the water at the waters edge, so that I could monitor the river rise during the evening. I checked on the stick throughout the evening. The river was rising, but it had a ways to go to be a problem.

Here is a shot of our site along the river: 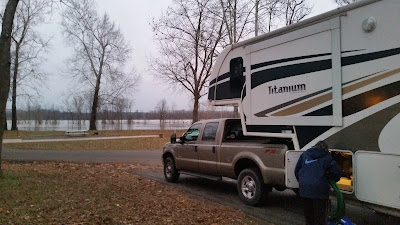 We didn't even unhook the truck. The site was level enough and we were only staying one night. It seems we are always in a hurry when we leave or are coming back to Missouri. We really wanted to get south before more freezing weather came in.

Next we made the drive to Daingerfield, Texas. This is a small town in east Texas. We like to drive rural routes especially in Texas. The roads are nice and we enjoy the scenery. We stayed at Daingerfield SP. Our Texas State Park pass is still good from our visit last year. We like Texas SP's for many reasons, but the main two are:

1. You can fish in the parks without a fishing license. That makes fishing affordable for me in Texas. Unlike any other state I know of.

2. If you have the pass, the rates are very good. usually between 18 and 21 dollars with Water and Electric. (The pass costs $70 per year)

East Texas had also seen flooding over the past week, but the water had been receding for a few days and everything was returning to normal.

Here is a shot of the lake at Daingerfield SP: 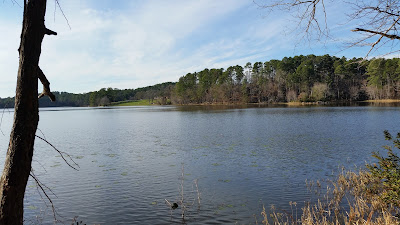 The park is OK, but the sites are pretty short. We got one of the few that a large rig would fit in.

I went into town to get Diesel in the truck and did a bit of exploring. I found a cool old theater in downtown. It is open and was showing first run movies. All seats were $1.50. I found out later that the theater had been built in the 1920's. When I returned and told Kim about it and that the new Star Wars was showing. We had seen it once, but Kim is a Star Wars freak, so we decided to see it again. The theater did not disappoint. It was frozen in time back in the 60's when I first went to the movies. The popcorn was fresh and good. We had a great time. 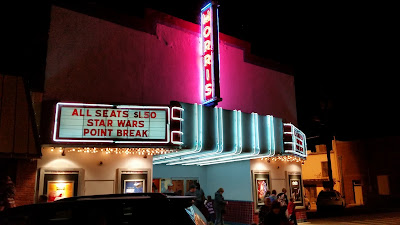 The next day we moved again. We headed to Cleburne State Park. That would be our base camp for our time in the DFW area. I will pick up the story from there in my next entry.

Posted by ktmissouri at 6:11 PM