We arrived on Galveston Island on January 20th. We had to be a bit careful because we did not want to be seen by Kim's uncle Kenny. His surprise birthday party was not until the 23rd and we would have a hard time explaining our presence.

We spent the first few days at the SP enjoying the beach when the weather allowed. We had a warm day followed by some colder days with some very strong winds. We had gusts of over 50 mph. This was the same storm that dumped all of the snow out east over last weekend.

I did get out for my daily walks. Some days I was wearing shorts and a T-shirt and other days I was in a hoodie with a coat over that with a stocking cap and gloves. That is just the way the weather is on the Texas coast this time of year. The good news is no freezing weather. It is just so much easier living in an RV when we don't have to worry about freezing up.

On Saturday night we went to Kenny's party. He was completely surprised. My pictures did not turn out well. I had played with some settings and they came out blurry.

The party was held at the Lighthouse organization building. This group, which Kenny is a part of, provides help with charity events and also feeds people in need in times of need, like after Hurricane Ike a few years ago. They have an extensive inventory of vehicles and cooking equipment. We all got the tour of the place and then had a nice shrimp and gumbo dinner.

I have been a member of this family for 36 years now. I have come to really appreciate the entire Wegner family, but especially Kenny. He is one of the most amazing people I have ever met. He has always been so nice and welcoming to me. I just love the guy! It was great to see him and spend some time with him and his family.

We also had a gathering at Kenny's son Mike's house on Tiki Island on Sunday. Many came over for breakfast, but then had to leave to head home. We ended up staying all day and watching football games.

We had a great time, but on Monday January 25, it was time to move on. Kim and I took one last walk on the beach. It was a beautiful sunny day with temps about 70. 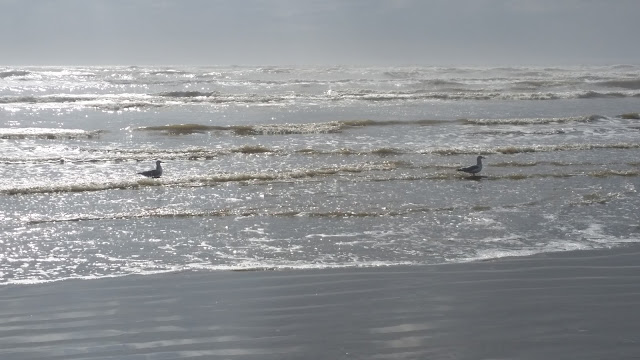 We Left Galveston by way of the ferry over to Bolivar. This allowed us to totally miss Houston traffic on this trip. And the good news is that Texas ferries are free!

We saw a few dolphins while we were on the ferry ride.

Kim was born on Galveston Island. She loves it there. I have come to love it also, It is just a special place to both of us. In less than a year we have both visited the place of our birth. I am not sure of why that is important to us, but it just is. We love our family and that is one of the big reasons we love this lifestyle so much.