On July 31, we finally left Missouri. We really enjoyed our time at the lake with the grandchildren, but after two weeks we were whipped.

We left Bull Shoals and headed over to Highway 65 and drove the steep hills up to Springfield. The truck did great, but I have to admit I was relieved when that was done. We then headed due west on Highway 97 through Carthage, Missouri. Then across the state line and hit Highway 160. We stopped for the night after about 200 miles at a COE park called Card Creek.

This was Sunday night and as expected, the place was empty. The only rigs in the park were the host and one other rig that looked like it had been there a while. It is a pretty little park. It did not have water at the sites and only 30 amp electric, but at $16 a night, it was fine. We chose a big back in site that got shade from a large oak tree.

We did not even have to unhook. We just lowered both front jacks and rear stabilizers and called it good. It was closing in on 100 degrees, but with the shade the rig did fine on one AC.

We had a nice view of the creek that runs along the small campground. 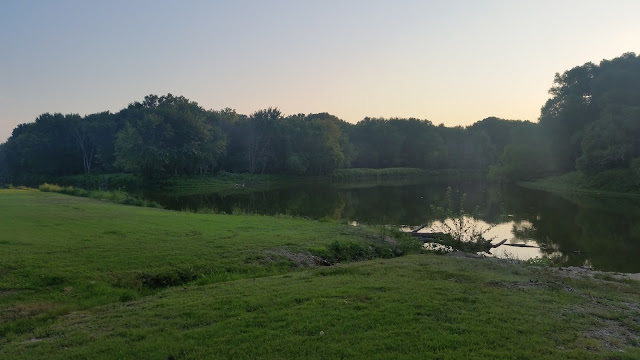 There is a boat ramp and dock. You can put your boat in here and take the creek out into Elk City Lake. Elk City Lake looks like a pretty big lake.

We had a nice sunset and as the sun went down it cooled off into a fairly nice evening. We still did not see another soul in the park. 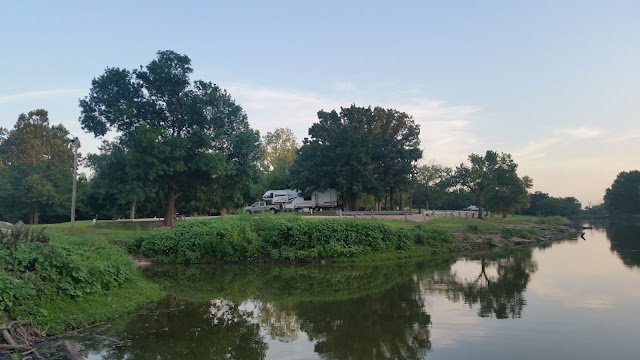 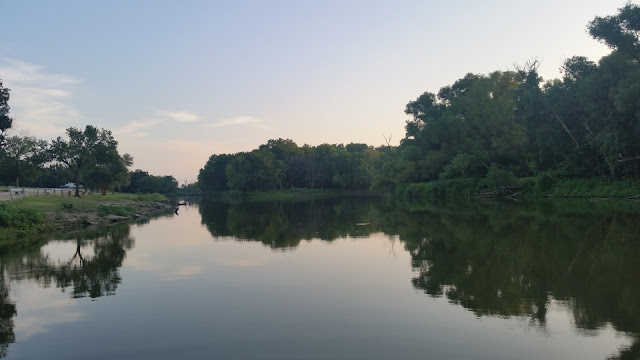 The only bad news about this park is very weak cell signal and no OTA TV at all. We would say that Card Creek is a great place to stop over for a night or two.

We got up late the next morning and had breakfast and then got moving. We had a very simple hook up and we were on our way. The dump station was not designed for big rigs, but we managed.

We drove north and west about 160 miles to just north of Hutchinson, KS to a Kansas State Park called Sand Hills. They had miles of hiking and horse trails. It looked like a pretty nice park.

The first impression was not good. The signage was very poor and our GPS took us down a dirt road. After about 2 miles we turned around and was able to find the right place to go. It looks like a brand new park. Many of the fire pits look like they have never had a fire in them. This park was built around a natural spring fed lake. When the trees grow up it will be pretty nice. The sites are huge and are easy to get into.

Many of the sites like the one in the pic above are pull throughs. You just pull in along the edge of the lake. Very nice and easy. Many are concrete pads and some have sewer. Some even have a small corral for your horses. 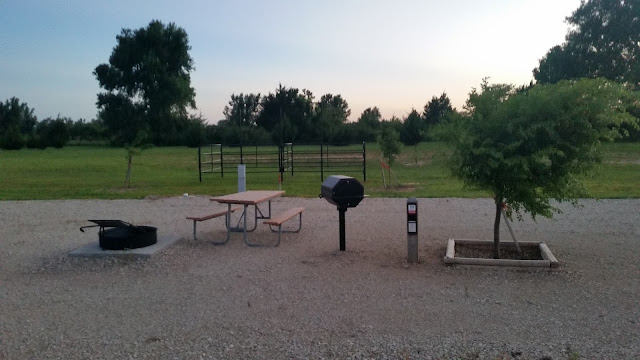 Once again we had the park to ourselves. The camp hosts were very friendly, but it was just two of them and two rigs in the park besides us. Here is our site from across the lake. 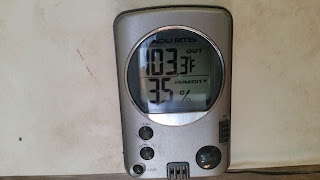 The humidity was much lower than in Missouri and after the sun went down we went out for a nice walk around the park.

As you can see we are moving much faster than normal. We are ready to get to Colorado and out of the heat.

I will write again in a couple of days to update our next moves. I can't wait for some pictures of mountains!
Posted by ktmissouri at 2:12 PM