First off I have an apology to make. I posted a video a while back that was a combined effort of myself and my granddaughter Isabella. It was a combined GoPro from a bicycle helmet on my head and her filming from the boat. I thought it came out cool, but I was getting no views. Here is the corrected link. Please check it out. I worked really hard putting that one together.

Also if you ever want to check out some of my other videos, you can check out my YouTube Channel:

Ok, back to our regularly scheduled program....

We left Cedar Bluff SP on Sunday, August 7. We were ready to get to Colorado, but we needed one more stop. We looked at our very few options and chose to stay at Shady Grove Campground in Seibert, Colorado. Even though we were out on the plains of eastern Colorado and the view from our site was of rigs to our left and right, it just felt good to be back in Colorado. Shady Grove is just fine and is run by a really nice guy. It is about 400 yards off of I 70, but we were running the AC, so that was not an issue. The Passport America rate was $18 for 50 amp. 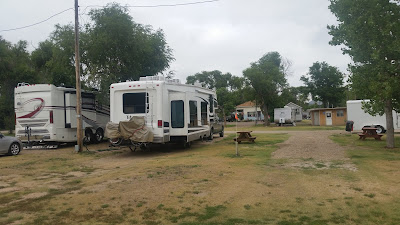 I took that picture just before we left. The rig to the right had just left. It is for the most part an overnight park. They did have good TV from a local antenna and cable at the site. We hung out all day in the cool AC watching the Olympics. We missed the opening ceremonies because we did not have NBC OTA when we were at Cedar Bluff. I think we had 1 channel.

It was then a easy 150 miles on in to Lakewood, Colorado. That is where both my brother Bob and his family as well as my parents live. We did make a reservation at Bear Creek Lake Park. That is our favorite place to stay when we are in the Denver area.

We spent the next three days hanging out with all of them and watching Olympic coverage.  Here is a shot of our dinner on Tuesday in the private dinning room of the building that my parents live in. 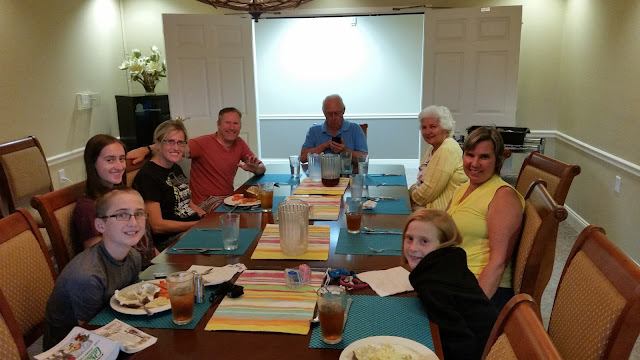 While I was in the park, I went for a walk and ended up over by Soda Lake Water Ski school. I stopped to talk to them and I was surprised to find out that I could sign up for a 10 minute session to ski on their lake behind their boat. Why would I do that? Well, many years ago, I skied competitively. Competitive slalom skiing uses a series of bouys to test the skiers and determine who is the winner. The series of bouys is called a Slalom Course. The ski school has a course and I wanted to see if I could still do it. To make a long story short, I skied as hard as I could and proved to myself that I have no business skiing on a course until I lose 30 lbs and practice a bunch more. Maybe this will help me get motivated to do just that. Here is a shot of the lake and the school. 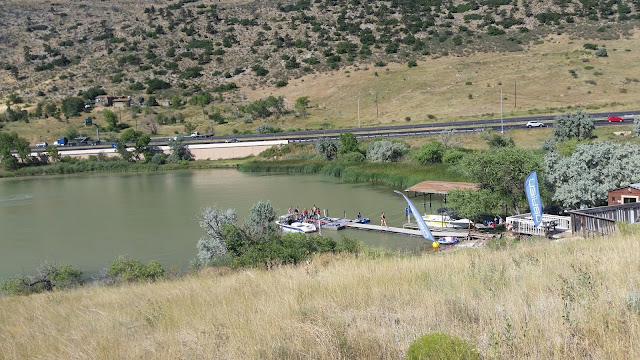 The last night we were in Denver, my brother Bob and his 12 year old son Daniel, decided to go play golf. My Dad decided to go with us. Dad is 85 and has not played golf in 3 years. He has had a number of health issues during that time and I wondered if he could still play. Long story short, He blew me away! He played great! My brother Bob and I were just amazed. I think it was the best golf I have ever seen him play. We were so happy for him and now he is excited to get back out there and play more.

We left Denver today, on August 11, and headed to the mountains. We did not have a reservation and were hoping to get a first come/first serve site at one of the NFS campgrounds up around Grand Lake. The only problem was we would have to make the climb up and over the 11,300 foot, Berthoud pass. I will write about that in my next entry.

Posted by ktmissouri at 3:05 PM