We sat under the stars on the evening of August 29. We were amazed at the darkness of the sky and the brightness of the stars. We saw a number of shooting stars. Some were very bright. As we sat and just stared up at the sky, we discussed our future plans. We only had one more day here at DNM and we really wanted to see as much as we could. We were moving the next day, so we really wanted to see what we could in the Cub Creek Road area. The rest of the Monument would have to wait for another trip and I can promise you, there will be another trip to this amazing place.

We decided to start the day with a hike. Kim looked over the options and chose to do the "Sound of Silence" trail. I was surprised because this is a moderate to difficult hike. It is about 3.5 miles out through the dessert and around some huge rocks and ridges. We did get an early start and we were the first ones at the trail head. The hike started out easy enough. We walked on a sandy trail out into the beautiful landscape. 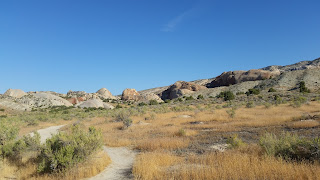 There were plenty of bunnies on this hike. We did not see any large animals, but plenty of small dessert dwellers. 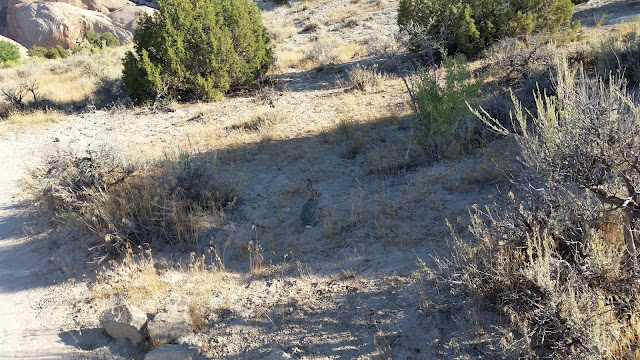 After about a half mile, we went into a deep sand wash and were surrounded by huge rocks. These were actually uplifted ridges. The ridges contained sedimentary formations that date back millions of years. 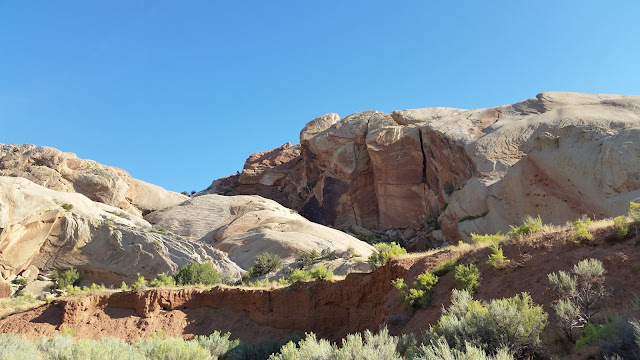 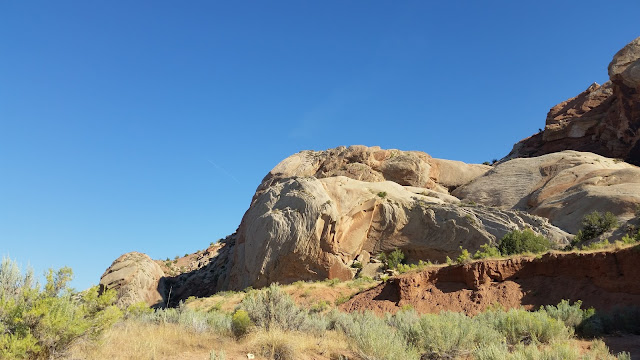 The trail went right up trough that cut in the rocks. 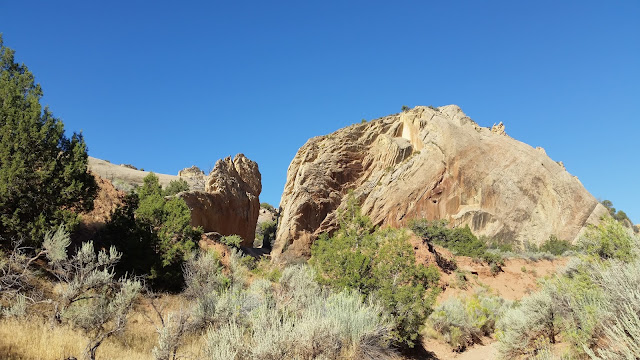 I would like to tell you that I selected some filter for this next image, but I really don't know why my camera did this. I do think it turned out pretty cool. 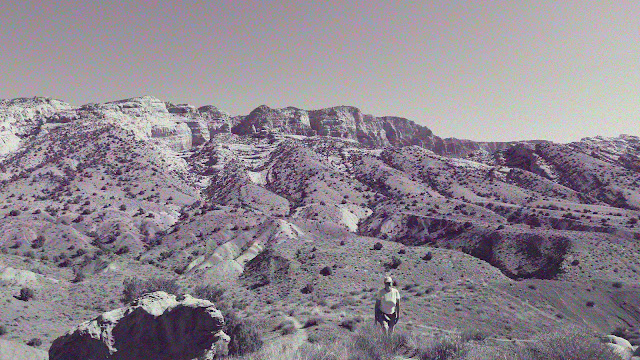 We hiked for about 3 miles and I thought we were about done. I was questioning to myself the difficulty rating of the hike to this point. There had been plenty of steep climbs and downhills, but nothing too bad. Then we hit this spot. Yep, straight down this sandstone slab. It reminded me of our hike in Arches NP last year. 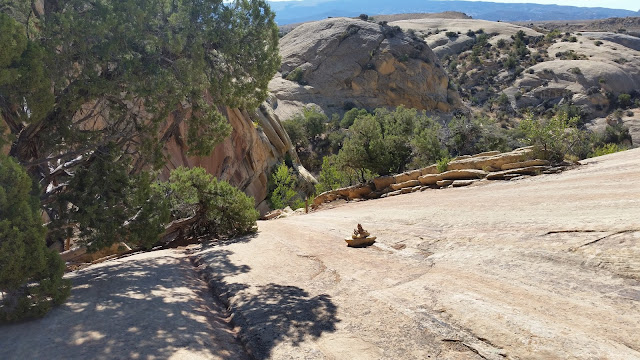 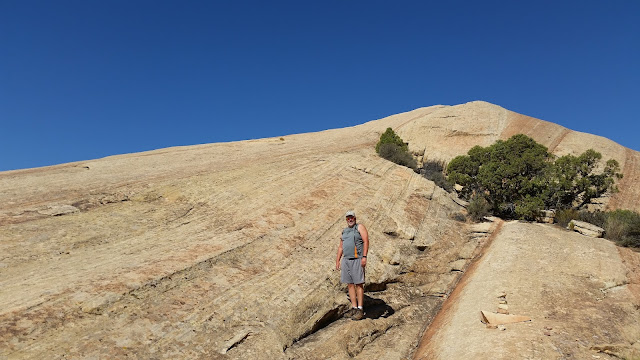 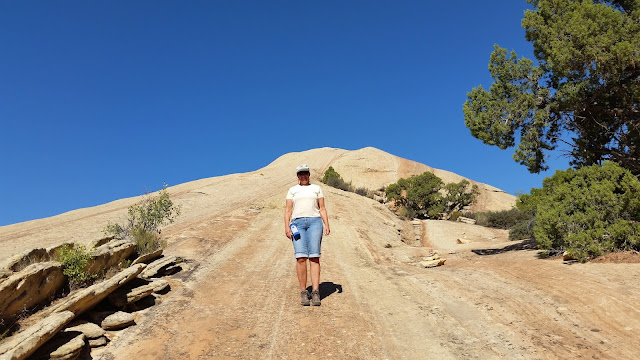 We had to do some climbing on all fours or as Kim prefers the butt slide, but we made it without incident.

Kim wanted a picture of a lizard in this entry. We saw lots of lizards, but this is the only picture I was able to get. 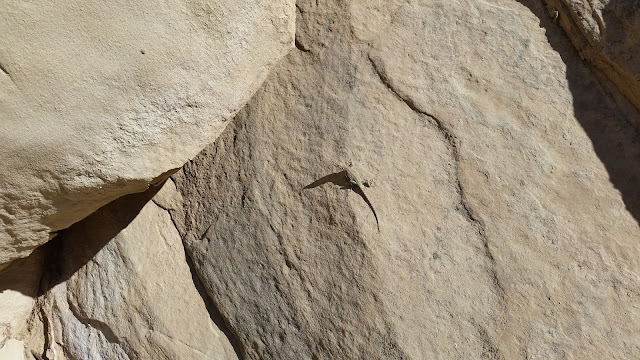 Here is a final look up the valley. I would highly recommend this hike to anyone that likes a little adventure and can handle the scrambling. You do need to watch your weather. I would not want to be out in that area in the middle of a hot day. Bring plenty of water. 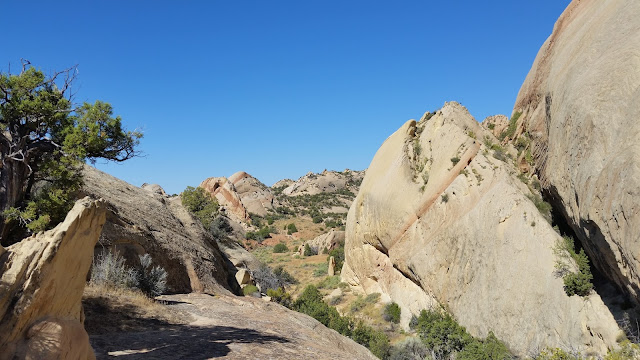 You would think that after that hike we would just go back to the rig and relax. No, not on this day. We wanted to see more, so we headed down to Cub Creek Road to see the petroglyphs. The first stop had a large number of ancient pictures right along the road. 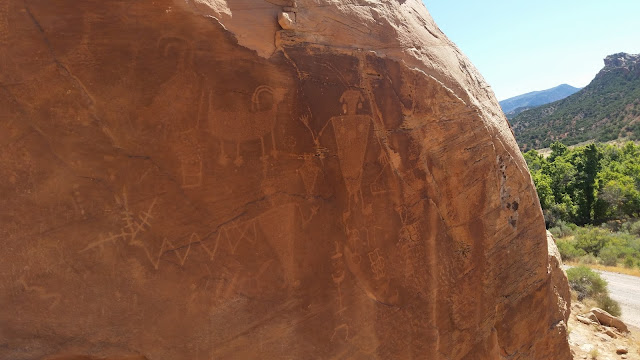 These were very clear and just amazing. They estimate them to be about 1000 years old and made by the Fremont people.

We continued on to the end of the road and stopped at an old homestead called Josie's Cabin. Josie lived there by herself until she was 90 years old. She was quite a character. She was totally self sufficient. There was an awesome box canyon that she used as a corral above her cabin. 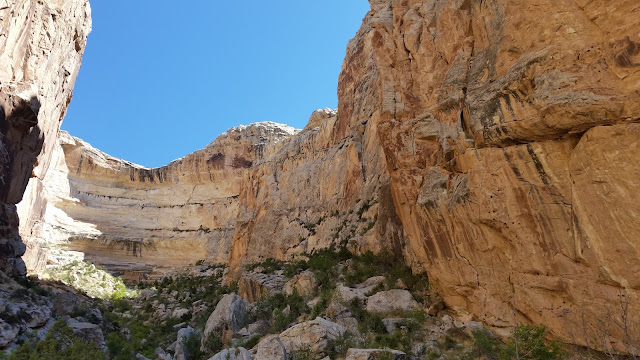 The walls of the box canyon had many features and formations. 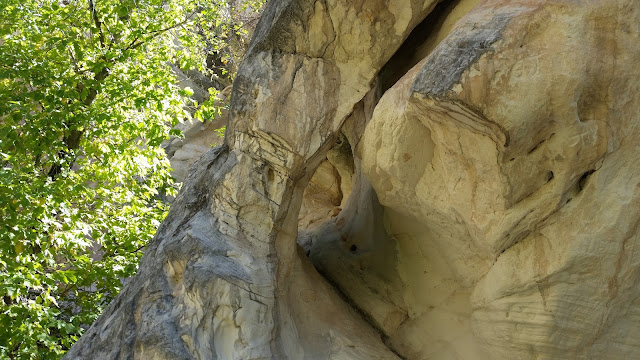 Along the road back there was a high ridge with more Petroglyphs. Kim was not up for a strenuous hike, so I did it alone. Here is a sample of the carvings: 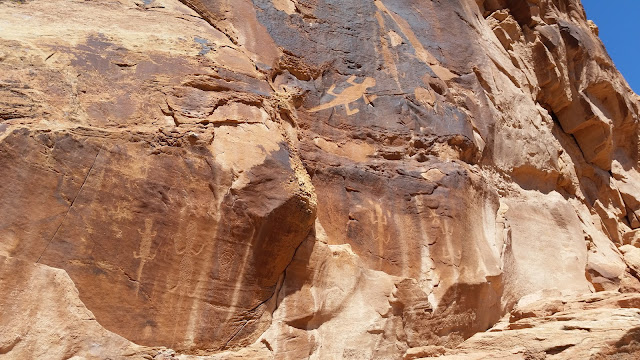 And the view of the valley that Kim missed. 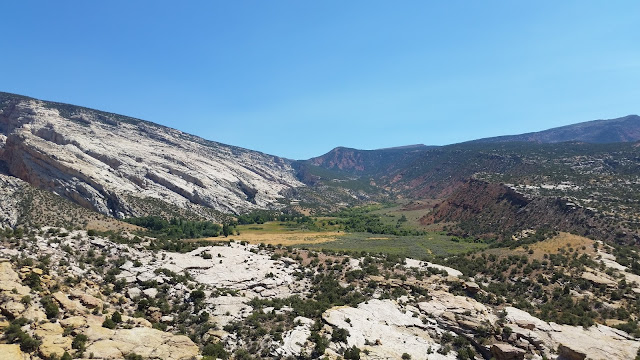 You have to look closely to see the different types of formations. It is just an amazing scene.

We finished the day with more stargazing. We just loved this place.

We had reservations for the next night near Vernal, Utah. We had a 30 mile drive to get there. Before we left I wanted to take one more hike. I got up early and took the river trail right out of the campground. It goes about a mile and a half to the Split mountain campground and boat ramp. It is a fairly rough trail, but the views are outstanding. 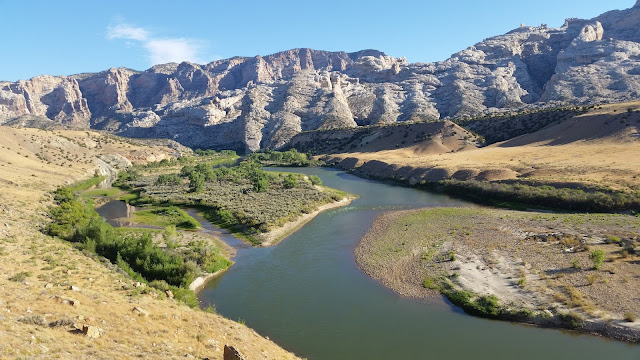 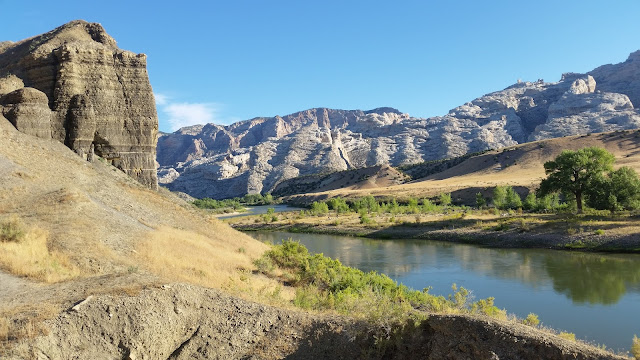 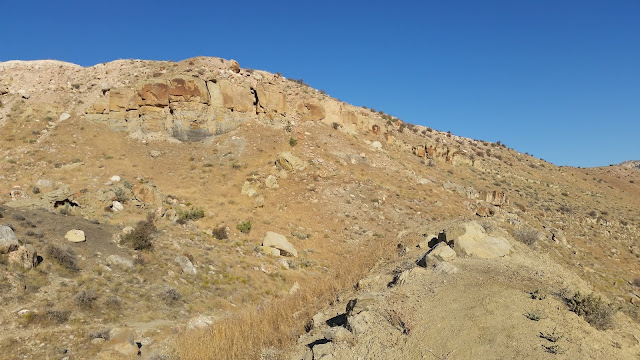 Well that about sums it up for our short stay in DNM. As I said before, we will be back. You may ask, why did you go to Vernal and why did you make reservations? I will fill you in on those and other questions in my next entry.

Go for a hike today!
Posted by ktmissouri at 6:23 PM