I am writing this entry on January 5 from the middle of the Arizona desert. We have an awesome camp spot with free hot tubs. How awesome is that? I will tell you all about it in a coming entry. For now, I have to go back a week or so to another cool place.

We left Las Cruces on December 28 and headed to City of Rocks SP. The SP is a very different place. They have campsites that are up in the rocks that do not have electric and water. There is an RV park type area that has 8 sites that can be reserved. Those have water and electric. We really wanted to park up in the rocks, so we found a nice large site that was right next to a windmill. The other thing is our hoses would reach the only water available on the loop. Bonus! We paid for three nights at $10 per night, but ended up staying 6. Here is a shot of our site: 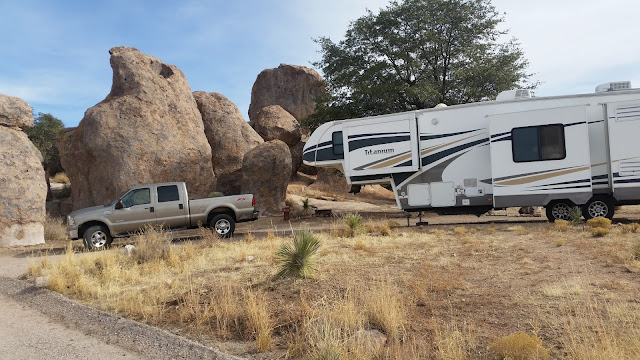 We took a walk up through the rocks. The little passages and trails are very interesting. 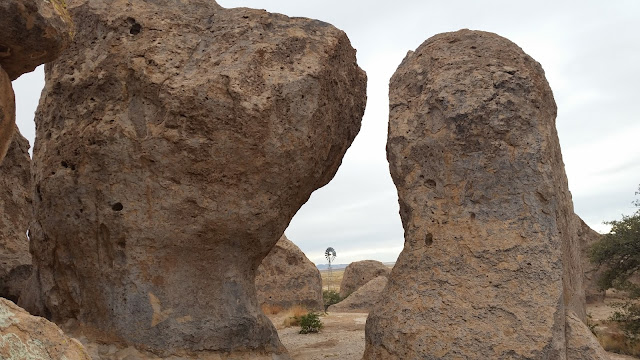 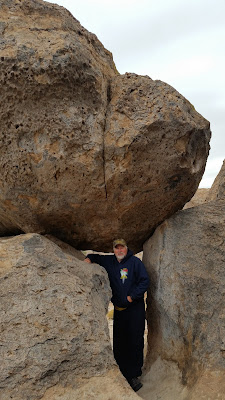 There are hiking trails that go all around the park out in the desert. I walked all of them while we were at CoR, There was one trail that looked like a major challenge. It goes up to the top of this mesa on the north side of the park. 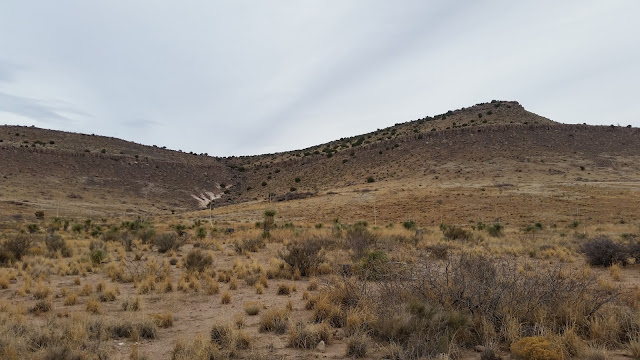 I would have to give that one a shot before we left. I will tell that story in the next entry.

After being there two days, the weather turned much colder. We decided it would be a nice day for a drive in the truck. There is a National Scenic Byway just north of the park called the Trail of the Mountain Spirits. We left the park around 10 in the morning and headed out. We knew that the Gila Cliff Dwellings were on this route, but there had been a road washed out and the dwellings were closed, but we decided to go anyway and see what else there was to see. We were not disappointed.

We drove along the Mimbres River valley. It is a dry arid land with a few irrigated orchards along the river. The surrounding hills and mountains were getting noticeably larger the further we drove north on Highway 35. 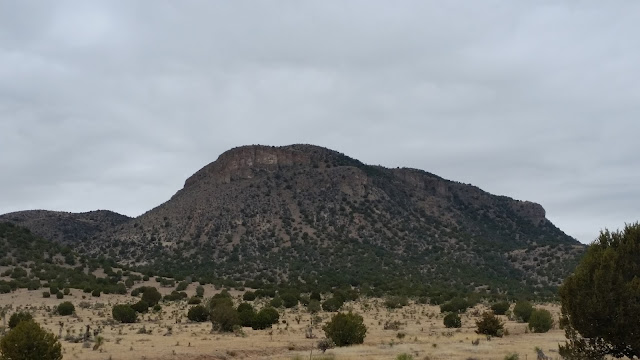 We came to the Mimbres Culture site, which is an archaeological dig site. It looked interesting but was closed. We drove on and crossed into and out of the Gila National Forest multiple times. The scenery turned to pine trees and large mountains. We came to Bear Canyon lake and had to stop to take a look. 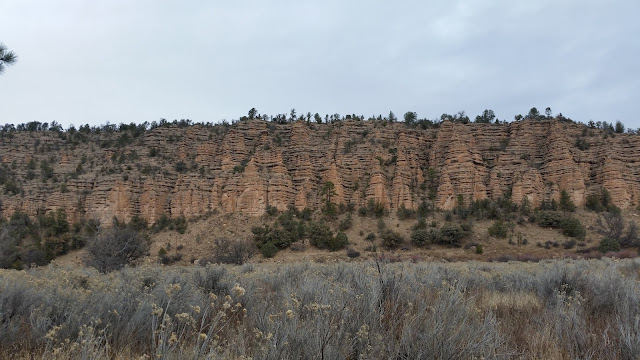 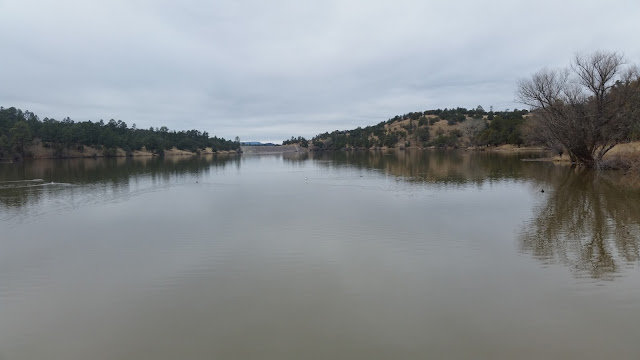 This is a beautiful area. The road was a bit rough and steep. I would not want to bring my rig up here, but this would look like a 4 lane highway compared to the roads we would drive later in the day on this loop.

We came to NM 15 and took the right up the mountain. This is a dead end road that ends at the Gila Cliff Dwellings National Monument. The drive was beautiful. 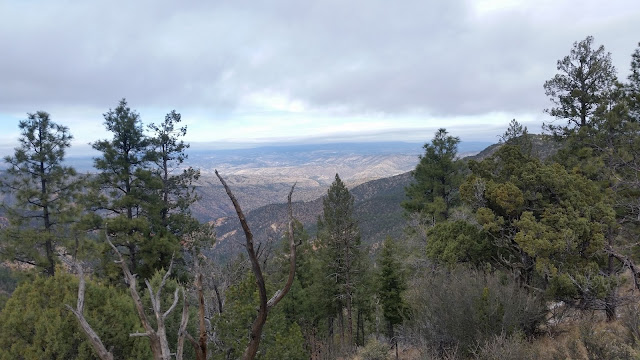 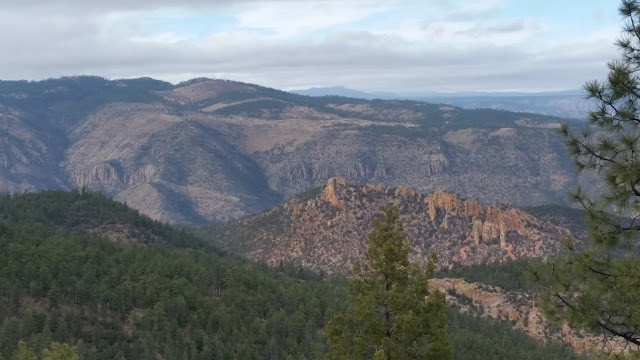 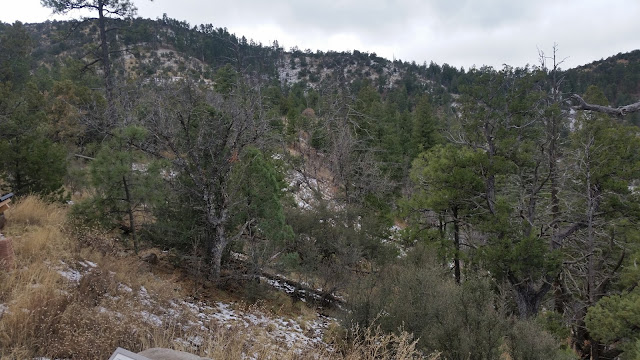 There was even some snow at the higher elevations. As we were driving I spotted some quail by the side of the road. These are Montezuma Quail. The first I have seen.

We arrived at the Visitor Center of the Gila Cliff Dwellings and confirmed the closing. The volunteer was very helpful and we talked for a while about the full time lifestyle. She and her husband have been on the road for about 9 months. We talked about how her husband had driven their motor home over the roads we had just driven to get here. Maybe some day we will slow down and do some volunteering or hosting. We watched the movie and read all of the other information. It was worth the stop.

I read about the many peoples that have lived along the Gila River. The last before the Europeans invaded were the Apache. This is where Geronimo was born. There is a monument just outside the VC. 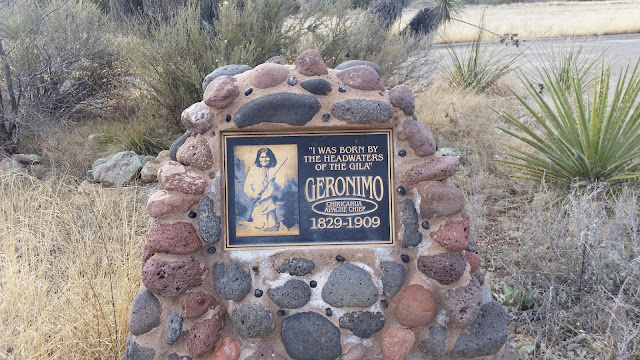 We then drove back along the Gila through the area around the Gila Hot Springs but did not stop. We drove back on Highway 15, the same way we came until we got to the intersection of Highway 35. We took Highway 15 to Silver City. The road started out with steep narrow switchbacks and broken pavement and it just got worse from there. The scenery was blocked by low clouds, but what you could see was impressive. 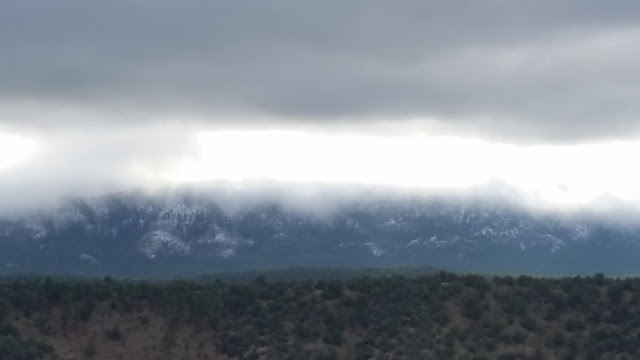 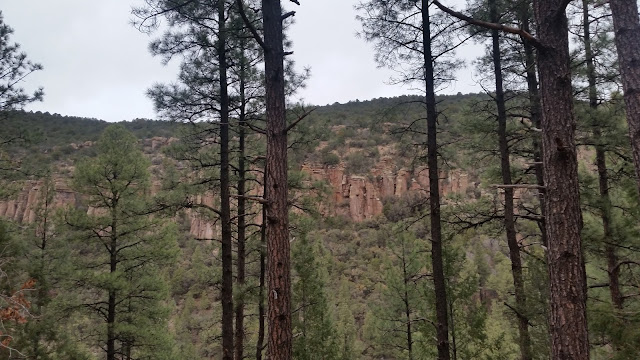 We drove on through Pinos Altos, which was founded in 1860 as a mining settlement. They have a few of the original buildings restored on the outside. Then we drove through Silver City and past the Santa Rita open pit Copper Mine. It is the oldest continually operated mine in the US and one of the largest. It as an interesting drive and nice to see the sights.

In my next entry, I will finish up our stay at City of Rocks and tell the story of a major mechanical failure in our trailer. The good news is I was able to fix it with Kim's help. I will also tell you about those hot tubs.
Posted by ktmissouri at 12:33 PM