Hot Wells Dunes and some Problems

We arrived at Hot Wells Dunes on January 3. We got set up and took a look around. We liked the place immediately. We loved the hot tubs and I liked the sandy soil with almost no rocks. You may ask why I liked the soil?...Well, I knew I was going to spend some time laying on my back under the trailer working on the slide that had failed to retract correctly as we left City of Rocks. I have a carpet, but the sand would make it very comfortable, and it did! 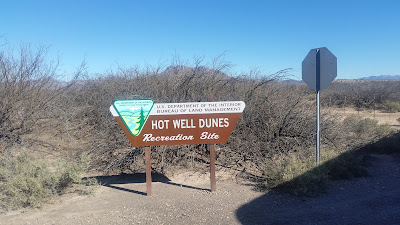 The good news is that we had good 4G cell signal at this location in the middle of the desert of SE Arizona. I was able to access a forum that I use to gain information and advice about my Glendale Titanium trailer. The guys on that forum are awesome. You can just ask any question and get great responses within a few hours. I did not have to put a question on the board. I just did searches for main slide problems and a bunch of stuff popped up including a link to the service manual from Lippert (the manufacturer of the slide and frame). I was now armed with the information I needed to diagnose and hopefully fix the problem.

My trailer has 4 slides. Three on one side: Kitchen, Sofa and Bedroom. These are all smaller slides and are all working fairly well. The Bedroom slide is a Accuslide that is cable operated and works totally differently than the others. On the door side of the trailer is just one very large slide that goes from the door all the way to the back of the trailer. This is the one that had the problem. Which was: When I hit the button to retract just the back part of the slide would move the front seemed to be stuck. This would cause the slide to get cocked at an angle and then would get jammed and not move at all. I was able to move the front half if I carefully pushed from the outside while Kim used the button to retract the slide. I could not push the back half of the slide. Well, actually I did, and that made my problem worse. I did this because I did not understand how my slides work. The silver lining to this cloud is; now I do!

The slide sits on two steel square tube rails that ride on a gear box that makes the slide easier to move. On the smaller slides, there is only one. The main slide has two. These two are syncronized by a bar that connects the two gear boxes. So if you push on the slide it will move together, but you can't push it because the other part of the slide mechanism is a ram actuator. This is a electric motor on a long screw jack type ram. This is very similar to the landing gear on the front of the trailer. The actuator can not be retracted without turning it mechanically. I tried and I am big enough that I actually bent the mount for the actuator. I will never do that again.

I crawled under the trailer and used my electric drill to remove about 20 of the self tapping screws that hold on the plastic sheet on the belly of the trailer. This stuff is called Chloroplast. I was then able to see the two gear boxes and the shaft connecting them, or should have been connecting them. There is a shear pin and as soon as I pulled down the Chloroplast, it fell on the carpet. I got the slide positioned properly and found a bolt in my misc parts box and inserted it. You have to make sure the slide is square when you insert it. That should have fixed the problem with the slide, but now I had to fix the problem that I had created. I had to go to the other side and remove a bunch more self tapping screws and pull back the chloroplast to get to the actuator mounts. I took them out and used the grill, picnic table and every hammer I carry to get them as straight as possible. I would have given $100 for a vice.

When I put it back together the slide worked perfectly. And it cost me nothing other than about 4 hours of my time. And my time is pretty cheap these days. The best part is I now know a major part of my trailer much better and should be able to fix just about any issue that comes up in the future. I would like to do some alignment on the slides, but that can wait until I am back in Missouri with all of my tools at my disposal. I did go out today and bought some other replacement bolts in case the one I put in fails. Sorry for the long description, but I was asked to do that. Feel free to ask any questions in the comments below.

To my friends that like to ride Off Road Vehicles - Let's talk about Hot Well Dunes a bit, because this place is special. There appears to be an endless amount of sandy trails that are mainly two track, but I found a few that are only used by motorcycles. There are also some rocky hills that have roads and trails that go to who knows where. This is all BLM land and it is ours to enjoy.

I took my big DR 650 out for a ride in the sand. It is just too heavy for that stuff and I was wishing for my 450 or better a 300 two stroke. I stopped to take pictures and the motor would not restart. I had to call Kim to meet me back at a road with the truck and we were able to jump start it and get it back to camp. A big down side of the 650 is no kick starter. I will replace the battery when I get to Tucson tomorrow.

So, my time at Hot Wells was a bit of a downer because of all of the repair issues. It really was not that bad because we just hung out and enjoyed the hot tubs every day. We did see a few people come out on the weekend, but not nearly as many as I was expecting. I met a couple driving this bug. They were great and gave me lots of local information for my coming stops. They had three large dogs in there with them. 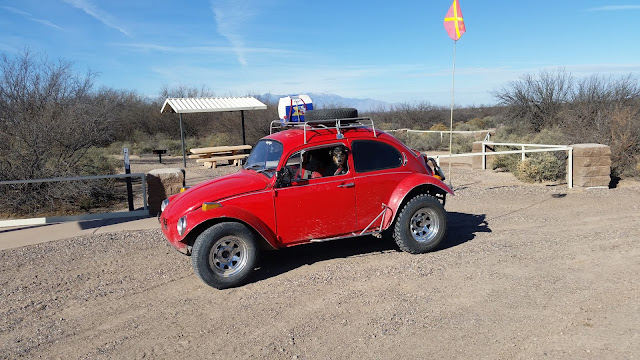 The scenery around this location is also really beautiful. I really liked the sunsets and the lighting on the rocks. 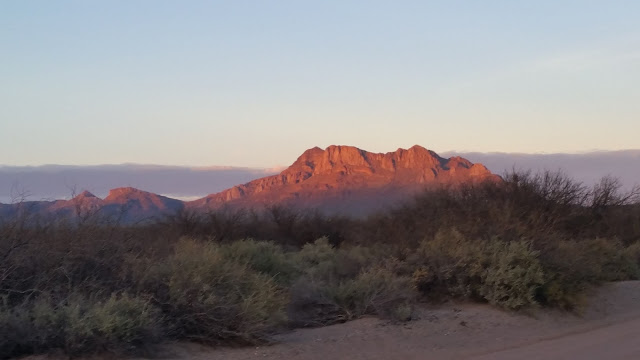 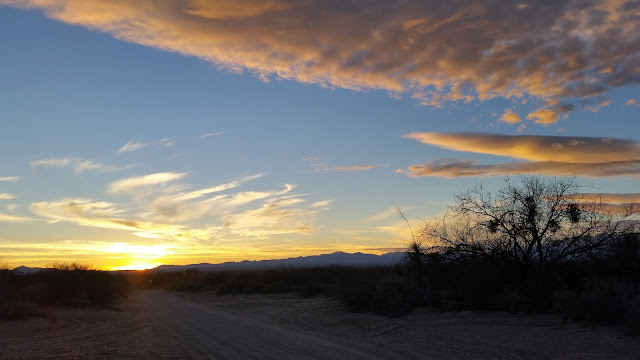 Well that is about it for Hot Wells. On Sunday, we decided to move on to Kartchner Caverns SP near Benson, Arizona. It was nice to get back to electricity for a few days. We left Mustang Island on December 6. In the last 34 nights we have stayed in a spot with electricity 17 nights or half of the time. We spent and average of $12.47 per night. I am sure we won't be able to keep that up as we head into California. I will write all about our time in the Benson area and the caverns in my next entry. Onward to more adventure.
Posted by ktmissouri at 5:10 PM