On January 28, we left Sam Houston Jones SP in Lake Charles, Louisiana. We drove about 200 miles to Fontainebleau SP in Mandevelle, Louisiana. This park is on the north shore of Lake Pontchartrain, just a couple miles from the causeway that takes you over to New Orleans. It is a large park that is fairly nice, but the best thing about this park is the location.

After arriving, I took a walk around to look at the local flora and fauna. They have some of the biggest Live Oaks I have ever seen. It is cool to think about all of the storms and other happenings these trees have seen over the last 1000 years.


There is a pier that goes out into the lake. The views are nice from there. You can barely see downtown New Orleans that is about 30 miles distant.


When I walked back to our site, I saw a guy who was obviously on a long distance Dual Sport ride. I HAD to go over to talk to him. I think his name was Tom. We talked for a long time and he told me about the mechanical problems he had been having. He was traveling from Daytona Beach Florida to San Diego and then down into Baja. He was very knowledgeable about his Honda XR650R, so I was not able to provide him any support. He was very concerned his battery would not start the bike in the morning and like the DR 650 Suzuki I have with me, it does not have a kick starter. I told him I would get up early and be ready to give him a jump if needed. He told me later that helped him sleep better. 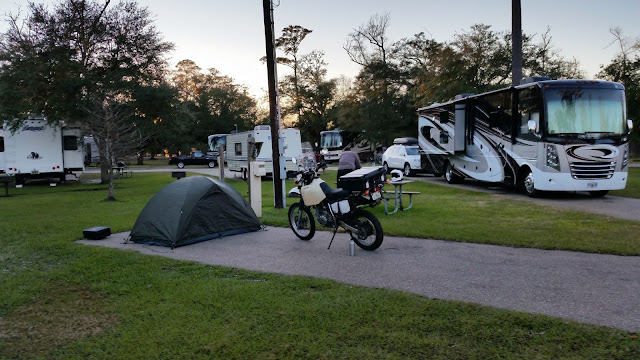 I took one quick shot of his camp as I walked away. The good news is his bike started the next morning and he stopped by to say good bye and I wished him luck. His camp site just looks cool next to the big class A.

On Friday morning, I took a 10 mile bike ride. Most of it on the local bike trail. It is one of those "rails to trails" route. I don't really like them because there are no hills or curves, but it is nice to not have to worry about traffic.


On the ride I saw this huge rig. That is an HDT with a Smart car and a street bike on the back with the large fifth wheel behind that. 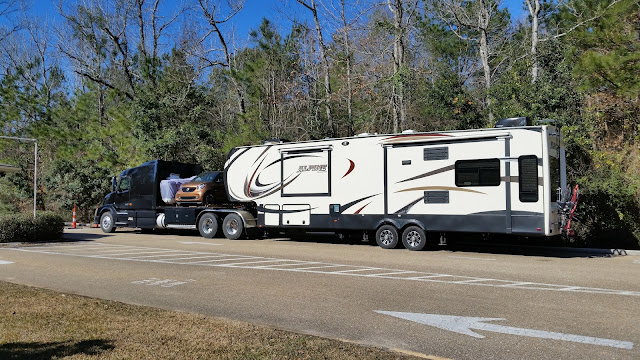 There are ruins of a Sugar Mill in the SP. It dates back to the mid 1800's and was a center point of a large plantation. I love to look at old ruins and think about life in the area at that time. It was not an easy life. 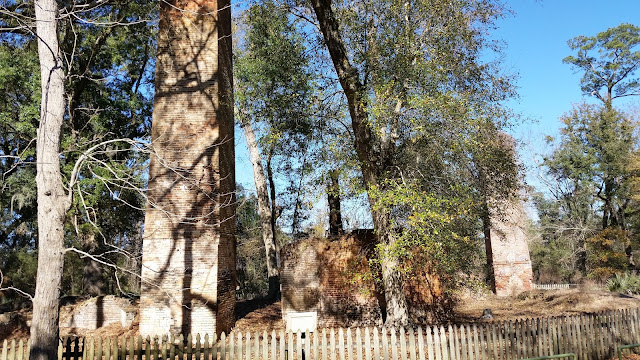 While I was on my ride, I told Kim to plan our weekend. We came to this area with one thing as our primary objective. Kim had never been to a Mardi Gras Parade in New Orleans. She wanted to fix that and I was willing to go along. Let's just say it was the New Orleans we had visited in the past, but with a large dose of crazy. I will write all about our experience in my next entry.
Posted by ktmissouri at 10:39 AM