On February 15, we arrived in Orlando, Florida. Big cities are not normally our thing, but we had some good reasons to come here.

The one thing that we don't like about this lifestyle is that we miss our kids and grandkids. The main reason we decided to come to Orlando was that we are going to get to see our son Mark twice and Shannon and Brian and their 6 kids are coming to spend a week. It is really all about family.

We looked around for a place to stay and were a bit surprised how things work for RVers in Florida this time of year. Most places book up a year in advance and the going rate for a site is $40 to $60 per night. The one way to avoid the high costs is to reserve a month at a time. The going rate for a month is between $500 to $900. Still a bit high, but with our budget being $600, we were good. We looked around and found a place that was close to the condo that Shannon and Brian will be staying in. It is only about 20 miles to the #1 destination of this trip: Universal Studios Orlando. I will explain why later.

When we arrived at our park, the office was closed. On a Monday? Oh Yeah, Presidents Day. Still a bit strange to have the office just closed with no instructions on what to do. We talked to some other residents and we just pulled into a site that was open and hoped. The only problem with this site is that it had very sandy soil and I got stuck. I decided to just drop the trailer right there and do a overnight set up.

It was not a good first impression and only added to my anxiety of being in this urban setting. When the office opened on Tuesday, they had us all set up in a site and all was good. Now the problem was getting out of the site we were in. The good news is that it had rained overnight and the sand was more solid. I made sure I was in 4X4 and was able to pull right out. We had no issue getting set up in our new site. The funny thing was when the neighbors saw that we were pulling in they all came out to watch. I nailed the back in on the first try. I am sure they all left disappointed. Everyone goes to a car race to see the crashes. Here is our home for the next month: 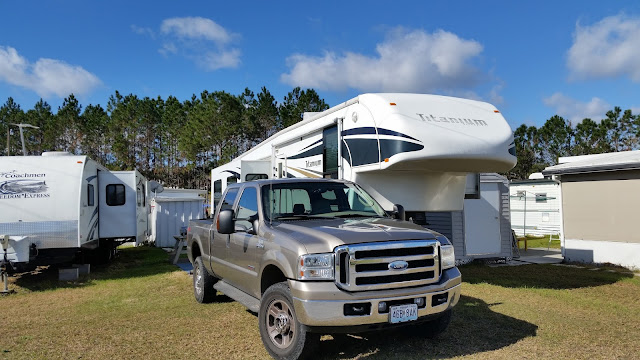 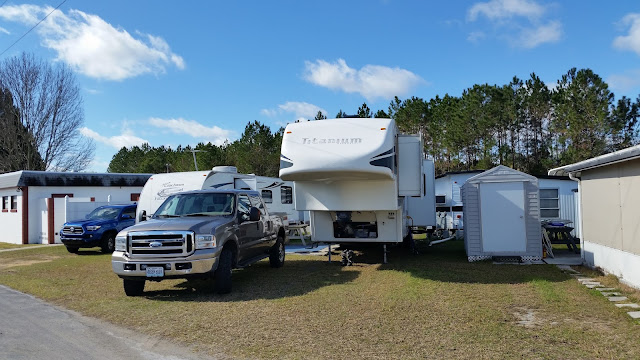 After getting set up, I started feeling better about this place. This is a very old park. There are many permanent residences and seasonals. Many of the RV's have not moved in years. My guess is the park was built in the 70's, but it could be the 60's. Many have old RV's that have been added on to with storage sheds and side rooms. I am sure the average age in the park is older than us, but everyone we have met has been very nice. They have plenty of social events and a very nice heated swimming pool. The temps have been averaging around 80 for the high and 65 at night. I little warm for us, but after seeing the storms up north, we can handle it.

Shannon and Brian are coming back to Orlando for the third time in the past year. Last spring, they went to Universal Studios because they are huge Harry Potter fans. They have two sections of the park dedicated to the very popular 7 movie series. The least expensive way to go was to buy season passes. Those passes are still good this year during their spring break, so they are coming back the first week on March.

We decided to get season passes also, so we headed out to the park to get the passes purchased. We got it done and even spent about 4 hours walking around getting oriented. We even rode a couple rides and learned that we need to work on our motion sickness. 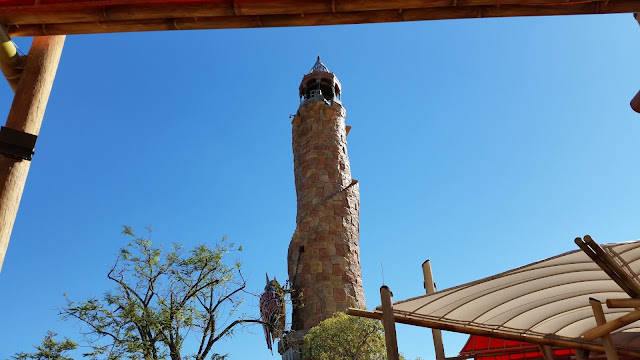 This is one of those things that we identified that Kim really wanted to do. We are at a point in our lives that if we want to do something, now is the time to do it. We spent over $500 on our passes, but we will use them plenty of times and are really looking forward to sharing it with the kids.

I will write more about our time in Orlando over the next few entries. Come back to see if I can keep my breakfast down after riding some of those rides.

Posted by ktmissouri at 9:14 AM