I am writing this entry on February 24. There have been storms all around the SE US in the past 12 hours. An RV park was hit by a tornado up in the New Orleans area last night. We have heard from a number of RV friends and thankfully all are safe. Our prayers go out to those that were not as fortunate.

This entry will cover this past weekend and a little of last week. On Friday, February 19, we decided to spend the day at Universal Studios. The theme park is really two different parks. Our passes cover both. We did a quick tour of "Islands of Adventure" on Wednesday, so this time we did a tour of the park called "Universal Studios - Orlando". 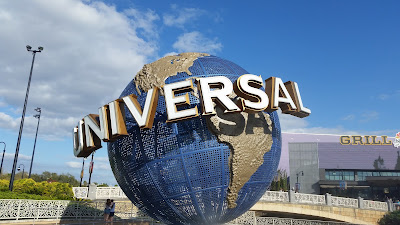 The park is broken up into sections that each are based on a popular movie.

We first hit Diagon Alley. I loved the dragon.

We ended up doing a bunch of rides and watched two shows. We had a really fun day. It feels a bit strange to see all the families with kids and we don't have any with us, but we are kind of like big kids so that counts.

On Saturday, we went over and met our son Mark and three friends for dinner. They are heading out for a cruise on Sunday. We went to a Habachi restaurant and had a great time talking to Mark and getting to know his friends.

The next morning we got up very early for us. We were on the road at 9AM. The humanity!

We headed over to pick up the guys and drive them down to the cruise boat in Cape Canaveral. That went smoothly. We will pick them up next weekend to get a recap and take them back to the Airport. I shot one picture of the group, but it sadly did not turn out. Oh well, I will get them when they get back.

We then went to Titusville and checked out the area around the cape. This area is of course, the home of the Kenned Space Center. I have planned to check it out at some point, but today was not the day. We went to the Merritt Island National Wildlife Refuge Visitor center and took a walk around.

They had a nice boardwalk. We were just kind of killing time before we went over to Jetty Park to meet up with our friends Bill and Lisa. We met them last year in Goose island SP in Texas. They camped right next to us. They are from Rockford, IL. They are both retired school teachers and love to travel, but maintain a home in Illinois and spend about half of the year there.

We were sitting on the grass right next to the channel that goes into the cruise ship port. Directly across the channel was a US Navy submarine base. My son Michael served on the USS Hartford during his time in the Navy. His submarine went into this base several times. Here is a Navy research ship coming out of the base. 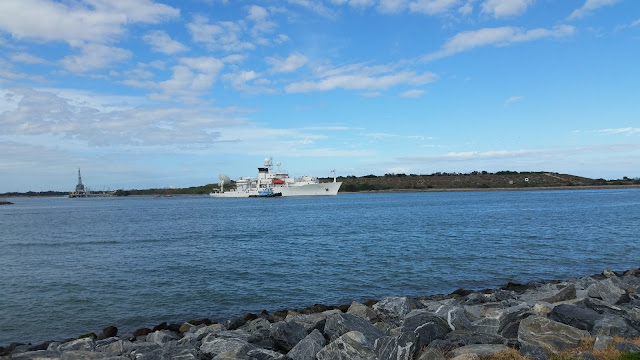 Looking down the Channel, you can see the cruise boats coming out of port. 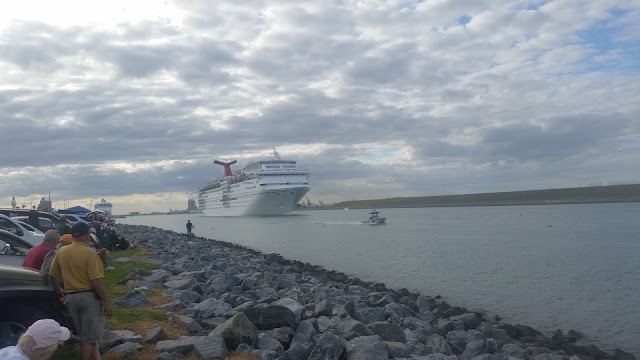 There were a total of 4 ships coming out of port heading out to sea on this Sunday.

It was fun to waive to all of the passengers as they headed out on their cruise.

Here are a few shots of the boat that Mark and his friends were on. 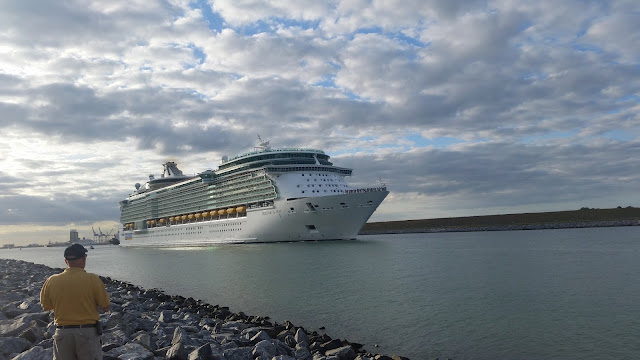 Sadly, we did not see Mark or his friends when they were cruising by.

Next up was a Disney ship:

The next ship was not scheduled for a while, so Kim and I took a walk to the beach and the Pier. We had a beautiful sunset and a full moon. It was a beautiful evening. 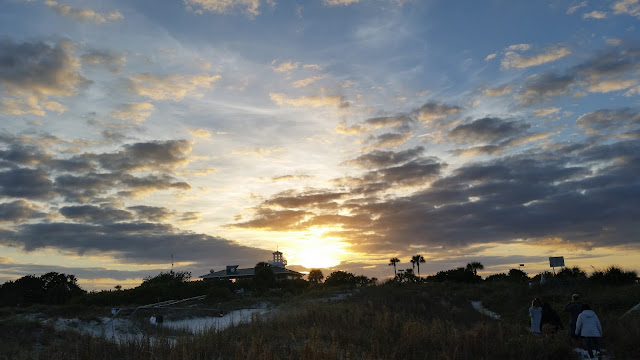 Bill and Lisa even fed us dinner while we were visiting. We had a great time watching the cruise ships and telling stories of our travels over the past year. We are hoping to see them again before they head north.

It has a been a fun first week in Orlando. We have three more weeks here. I am sure they will get crazy when the grandchildren get here. We can't wait. Come back to see what else we find to do in this active area.
Posted by ktmissouri at 10:56 AM