We were staying at Fontainebleau SP in Mandeville, Louisiana. On Friday, January, 29, we started our Mardi Gras celebration.

Kim had never been to a Mardi Gras parade in the New Orleans area. She loves to go to parades, but had never been able to see one in this area. I used to come to New Orleans on a regular basis for work. I have always enjoyed the area and on a visit many years ago, I went to a very family oriented parade in Metarie, but that was my only time. Crowds are generally not my thing, so this was Kim's adventure. I let her plan it and I went along to provide security.

We started with a very family oriented parade in Mandeville on Friday night. We got there early, maybe a bit too early. We waited about 2 hours for the parade to come by. It was OK, though because there was plenty of celebrating going on. Kids were playing football in the street and a local church had a big cajun food cookout going on. We did not know until later, but the food was FREE. We also found out later that there is a parade tracker app for your smart phone that would allow you to arrive just before the parade gets to your spot. We did meet some local folks and enjoyed learning about the area. Everyone we met was very friendly and thanked us for coming to their city.

We had a very good time and caught a number of "throws". It was a nice way to start our Mardi Gras experience. It was only about a 4 mile drive back to the campground.

On Saturday, we were brave enough to go to New Orleans and hit some of the uptown parades. There were 5 scheduled back to back on the same route.

We got our usual noon start and drove across the Lake Pontchartrain Causeway. That is about a 25 mile bridge across the lake.

We drove to City park and parked by the museum. It is free parking and is right by the last street car stop. It worked out perfectly. I noticed the statue below. I have read that they are removing many of the Civil War Statues that were erected early in the 20th century to honor Confederate generals. I think this is one that is being removed.


We jumped on the next street car and took it downtown. The city looked festive all decorated for Mardi Gras.

The parade route along Canal street was full of people. We did one parade and caught a few things. We asked around and found out the next parade was not going to be there for a while. We took a walk in the French Quarter and watched the crazy people and street performers. It is always interesting. We then went to Jackson Square. I wanted to check out the Katrina Museum. It was OK, not great, but for $6 each it was worth it. We also got to go upstairs and see the Mardi Gras Museum. We learned a few things and then were ready to continue our day.

We had Muffalettas at the Central Grocery for a late lunch.

We decided to hit Mass at the St. Louis Cathedral and then have coffee and bignets at Cafe Du Monde. What an incredible contrast between the quiet of the Cathedral and the crazy of the French Quarter just a few feet apart.

We then went back to the Parade route and watched 3 more parades over about 4 hours. I was a bit surprised by the large number of families with small children that stayed for all of the parades. There were a few people that had been over served, but with the heavy Police presence, I felt very safe. I caught many throws and gave many of them to some little kids standing next to me. We developed a friendly relationship and we talked about all that is important to a 4 year old between parades. We had a blast and ended up with a full backpack of beads and other trinkets. 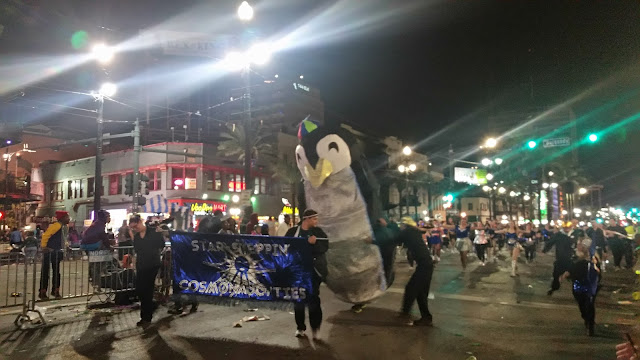 There were floats and marching bands and dance teams. The costumes were fun and everybody was having a good time.

The last parade was over about 11:00. We got on the streetcar and quickly made it out to City Park and then drove the 40 miles back to the campground. It was a long day, but a memorable one.

I had no interest in doing more parades on Sunday. Kim spent the day sorting her loot and making decorations for the trailer. It now looks like a parade came right through our house. The good news is that she now feels like she can cross that one off of her bucket list. I spent the day hiking around the park and relaxing.

We were heading to Gulf Shores, Alabama on Monday. We had plans to meet some friends at the Gulf State Park. Come back to see how that all worked out. I will give my full opinion about the park and the surrounding area.
Posted by ktmissouri at 12:11 PM