Paddling and Camping Trip on the Green River, Utah

When we went to the Visitor Center at Dinosaur NM, we talked to the ranger about different floats we could do on the Green River. He told us about a section of the river that is outside of the NM to the north. This section of the river starts at the Flaming Gorge Dam. The first section, called Section A, is full of big rapids and is used by white water rafter and kayakers. This was outside of our capabilities with our Sea Eagle boat. The second and third sections looked pretty good with the exception of a rapid mid way through section B. The third section looked perfect. 15 miles of relatively flat water and some awesome scenery.

I made a few calls to the Utah DNR and other agencies to learn if a plan that we were considering would be a good idea. Everyone we talked to was positive and told us we would have fun and see some awesome places that are not accessible by car. They also told us the fishing was great in that section of the river.

We thought about it and decided to go on Monday, September 5. That way we would be doing the rapid on the Monday of the Labor Day weekend and hopefully there would be people around to rescue us if we had a problem.

This was going to be a complicated plan. We would drive to the put in at Little Hole and drop off the boat and Kim. I would then drive the truck with the motorcycle in the back, 48 miles up through far southern Wyoming to Browns Park NWR. There is an old swinging bridge there that would be our signal to get off of the river. I would leave the truck there and I would then ride the motorcycle back to Little Hole. We were planning to stop for the night at Indian Crossing after doing about 7 miles of the river. We would actually pitch our tent and sleep in sleeping bags. Yep, real camping, not this RV Glamping we do every other day of our lives. The second day we would paddle the 15 miles of the C section. Then we would load the boat and drive back to Little Hole and get the motorcycle and load it back into the truck and drive back home to Vernal.

I have to admit I was a bit nervous about the plan for many reasons, but we focused on our preparation and helped each other with the critical points and went for it. I am so glad we did. 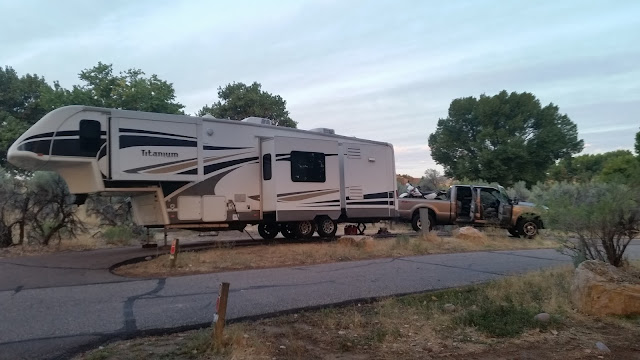 This is a shot of us getting ready to go. You can see my motorcycle loaded in the back of the truck. Why is it backwards? I would have to unload this 325lb motorcycle by myself and it would be easier if I could go forward. Just an example of how we thought the plan through to eliminate possible problems.

We got up very early for us and left by 7 to drive up to Little Hole. I dropped Kim off and headed down the river. The drive was not too bad with awesome scenery and only about 10 of the 48 miles were gravel. I was estimating it would take me 3 hours and I made it back in just a little over 2. 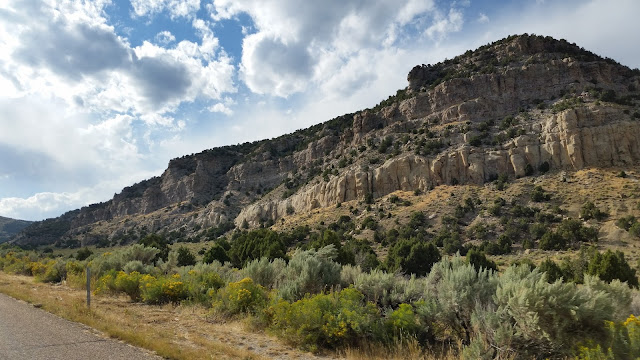 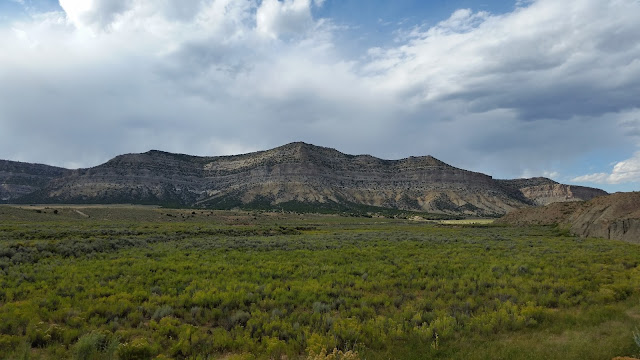 As I was riding along I said to myself that this is unexpected. I did not think about this fun Dual Sport ride through some awesome scenery to start my day. And I went through three states. Little Hole is in Utah, part of the road is in Wyoming and Brown's park is just over the Colorado border.

When I got back to Kim, she had the boat ready to go and she had good news. She had met the great camp hosts at the boat ramp and they told us to park the bike by their trailer and they would keep an eye on it for us. That was one concern eliminated. Yeah!

Here is a shot of Kim loading the last of our gear in the boat. You can see, the water was moving swiftly. We were a bit nervous, but very excited. 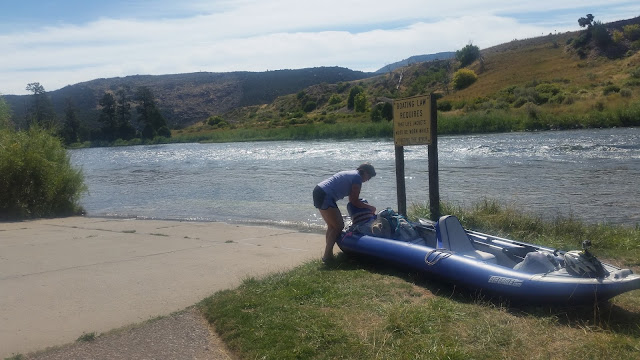 We headed out at about 11 in the morning and very quickly realized that the Sea Eagle was not going to have any problem with this river. We just needed to keep an eye out for big rocks and sit back an enjoy the scenery. Not much paddling needed to go down river. 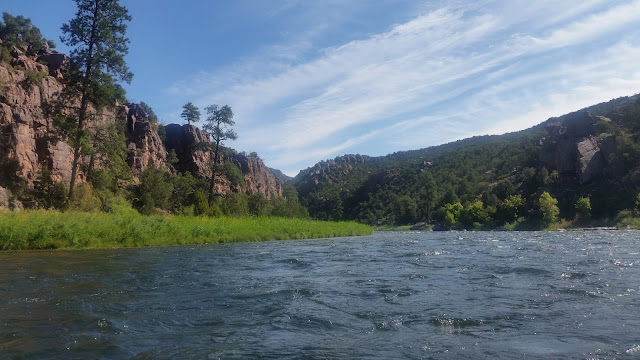 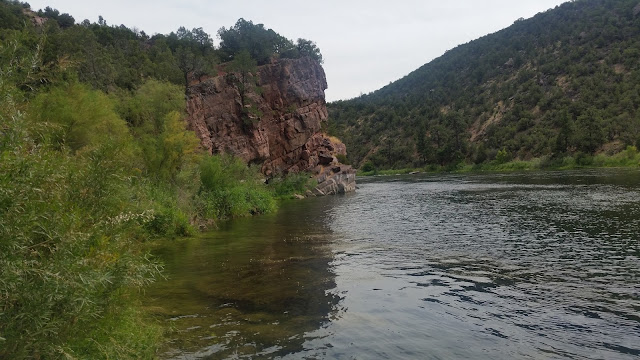 Along the river there are some designated campsites. These are reserveable and would make a great secluded camp for the night. We stopped to check one out. 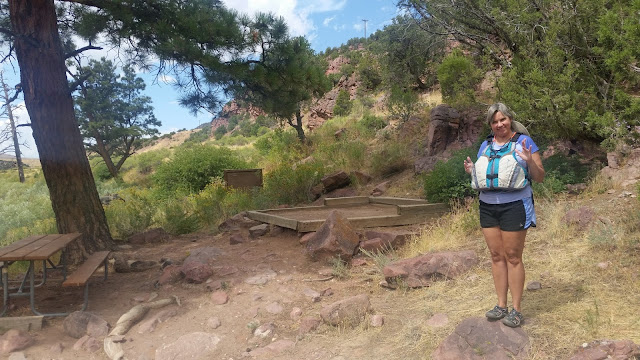 I got the fly rod out and did some fishing after I saw some large trout feeding on the top of the water. I did not have any luck that first day, but I was pretty preoccupied by the danger in front of us and the awesome scenery all around us. 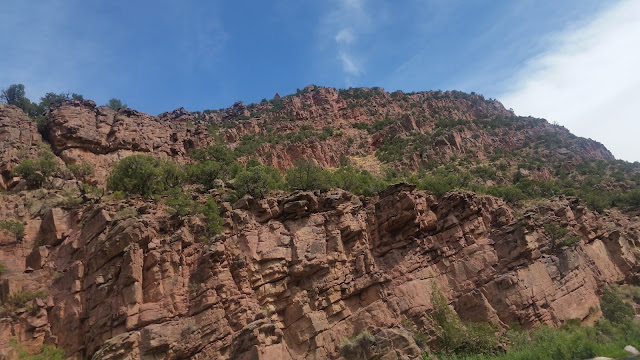 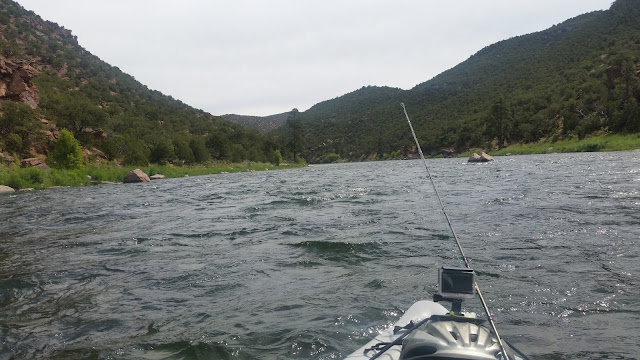 After about 2 hours we arrived at the Red Creek Rapid. We were there all by ourselves. We were told there would be signs and we would have the opportunity to take a look at the rapid before going in. Here is what it looked like. The sound was impressive and scary. 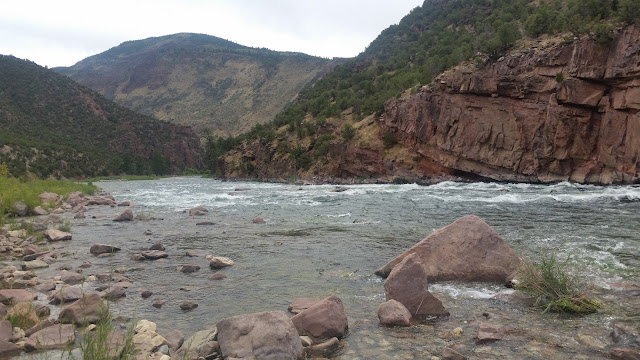 I took some video on this trip. I need to work on my camera skills, but I think the video below captures the experience fairly well. Just click on the link below. It is posted on my YouTube Channel.

The only problem we had was that we forgot to open our white water valves. This allows the floor of the boat to be full of water, but it won't fill up. By the end of the rapid we were full of water. Kind of like a small swimming pool.

I was happy to have that rapid behind us and in retrospect it was no big deal, and it was FUN! I would love to do it again.

Right after the rapid we came upon two white water rafts. They were some nice folks from Jackson, Wyoming. We kind of paddled together the rest of the day. They had a beautiful Husky. 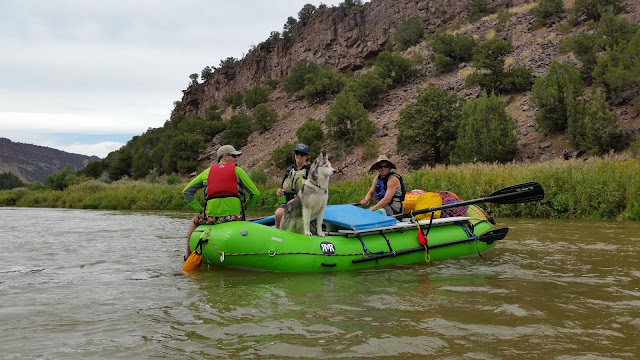 As you can see in the picture above, the Red Creek Rapid is named because it lets red dirt into the river. It is especially red right after a hard rain like we had 2 days ago. This caused the fishing to be bad the rest of the first day.

We arrived at our planned camp site called Indian Crossing at about 4PM. We found a good campsite in an empty campground. We were literally the only ones there. The only bad news is that when we opened our dry bags, some of our stuff got wet including Kim's sleeping bag. The good news is that we had 2 hours of strong sunlight to dry things out. 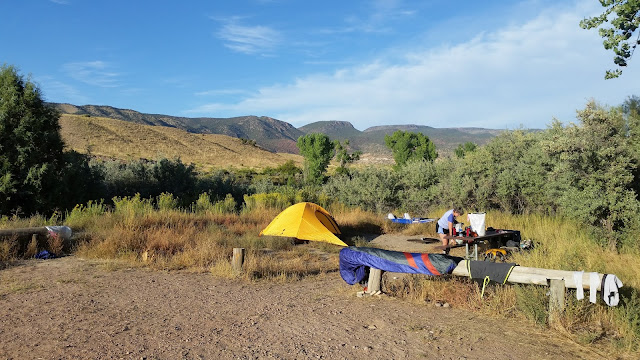 It was a nice spot and we settled in to a dinner of freeze dried beef stew and then went to bed early. It was a long day and we had a longer day on the river the next day.

We slept OK, not great, but we got up early and made breakfast of freeze dried eggs and coffee. I thought it was not bad, Kim thought otherwise. We had lots of wildlife around us including these mule deer. 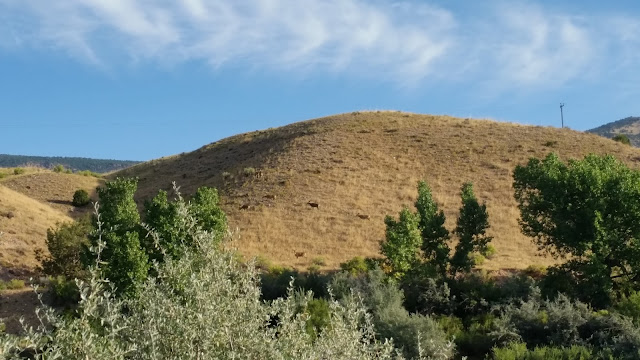 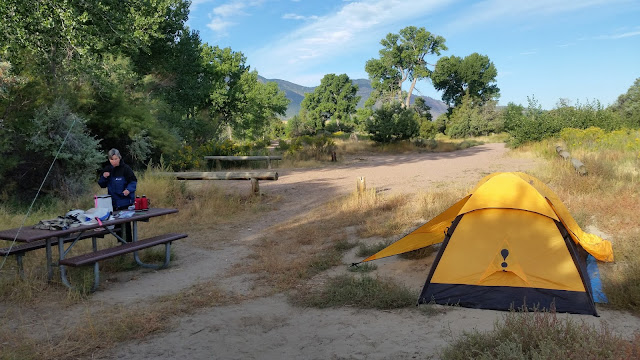 We got on the water and we noticed that the cloudy water of the previous day had cleared. I got the fly rod out and we just floated and fished most of the morning. Isn't that what everyone does on a Tuesday morning following a holiday weekend? 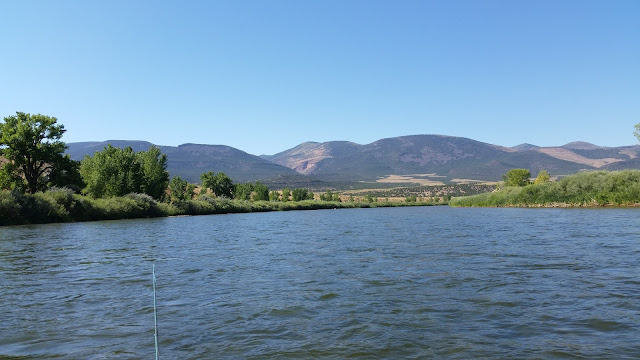 We stopped for lunch at the head of Swallow Canyon. It was a nice camp spot with big rocks all around. 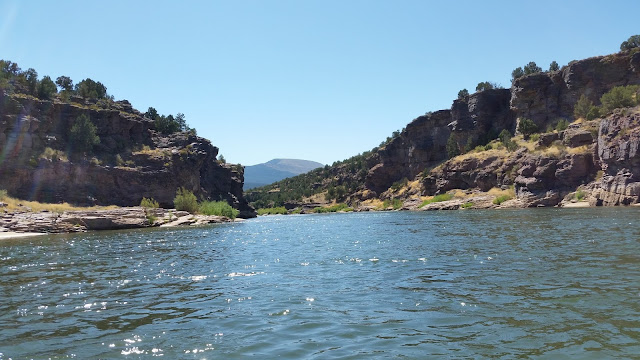 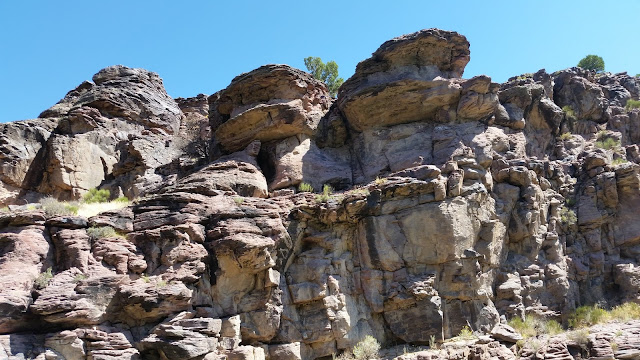 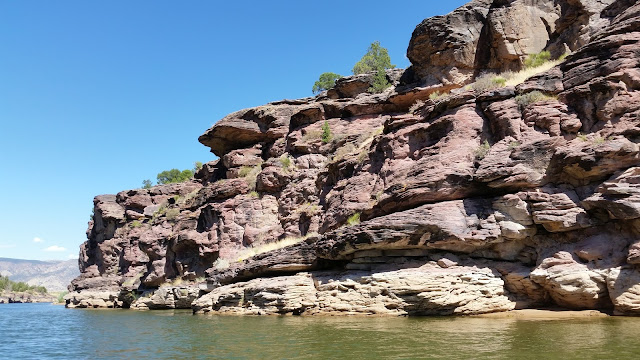 We did one other significant rapid. With our new found confidence in the boat and our abilities, it was no big deal. The second day was just very relaxing and fun.

Swallow Canyon was high walls of rock on both sides and plenty of nice holes to fish in. I hate to tell the story of the one that got away, but I will. I had a large trout come up and take my fly. Both Kim and I got a good look at the fish. I would guess it at over 20 inches. He quickly bent my fly rod over in 2. He swam hard for deeper water and went right under the boat. I could not release line quickly enough and he just snapped by 5X tippet. I was bummed, it was the biggest fish I have had on my fly rod in a long time.

Here are a few shots of our trip through the canyon. 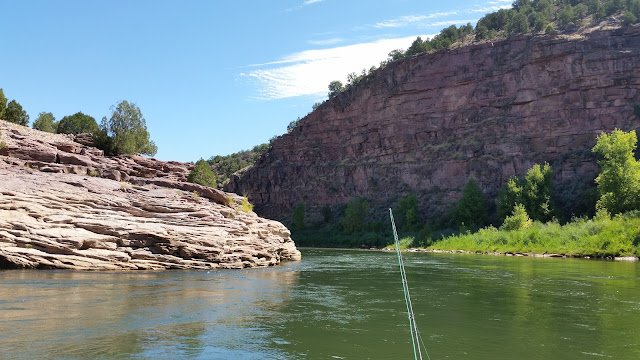 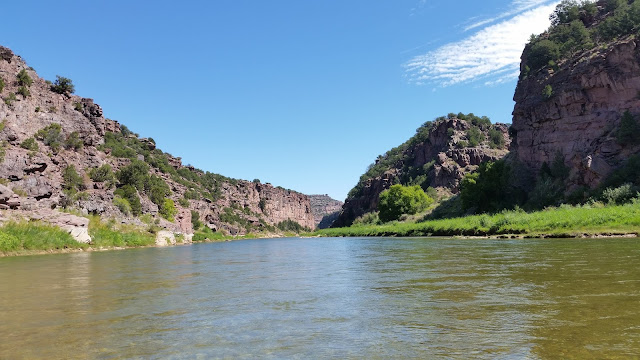 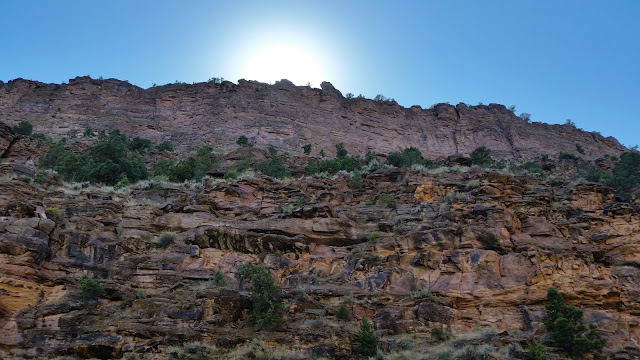 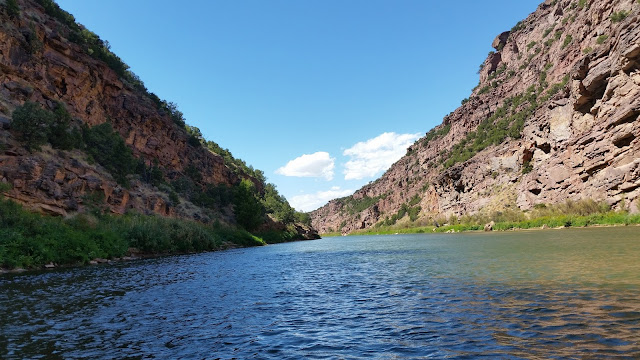 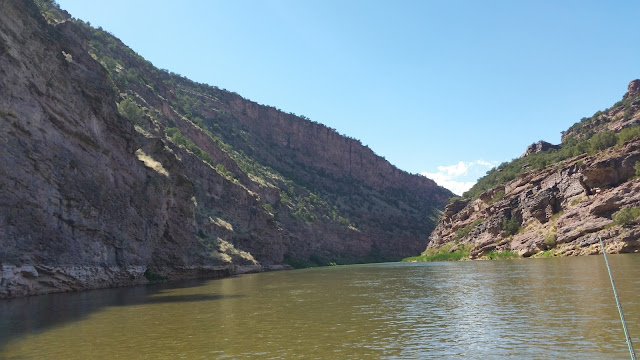 It took me a while to recover from the lost fish, but fish on I did. I finally found a nice hole and ended up taking three decent fish out of that spot. Here is the one pic I took to prove I really can catch fish. A pretty decent little brown trout. 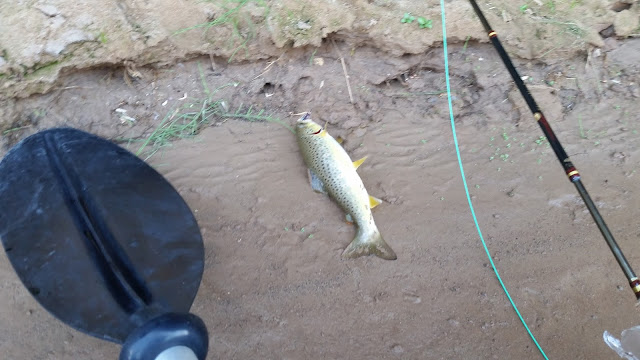 From the canyon to the swinging bridge, it was fairly flat water with awesome scenery all around us. We passed into Colorado and into the Brown's Park National Wildlife Refuge. I still had my Colorado fishing license, so I just kept on fishing. We finally made it to the boat ramp at about 4 PM. We loaded up and headed down the road back to get the motorcycle. The good news is that it was safe and sound thanks to our new friends. We did have a slight incident when loading the bike, but we recovered quickly and all was good for the trip home.

We stopped at the Flaming Gorge Dam overlook and took a few shots. That lake is 91 miles long. We started talking about renting a house boat and spending an entire summer cruising on this lake. A house boat is kind of like an RV isn't it? 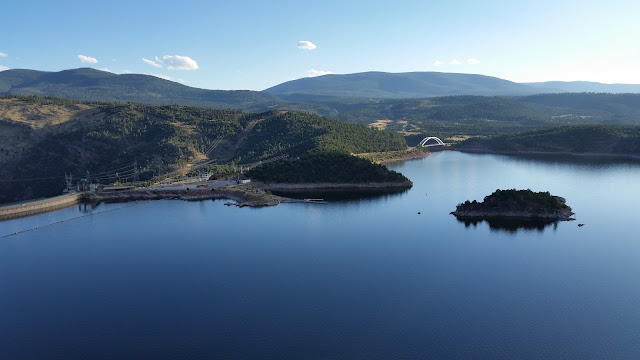 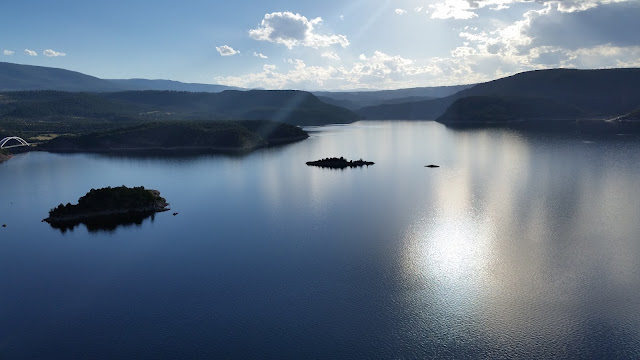 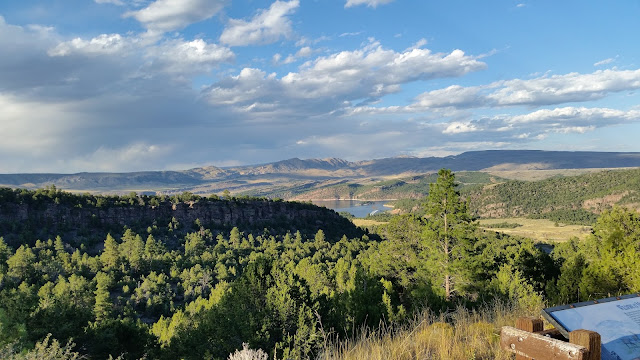 What a beautiful area.

We loved our camping trip. We will be talking about that for a long time. So, if you see us in person, be ready to hear more about it. Look for us to do more of this kind of adventure in the future. Anybody want to come along?

Next up is a very special day with my parents. Think about being married to the same person for 60 years. What an accomplishment!
Posted by ktmissouri at 10:38 AM