We arrived at Yampa River State Park on August 23. The park is on a flat arid area right next to the river. They have electric only at the sites, but they have water outlets spread around the park. The Cell signal on Verizon is OK, but not great. We had weak 4G and 3G most of the time, but it worked for calls and slow data. There is a 1 mile walking trail around the park that includes an animal observation blind. 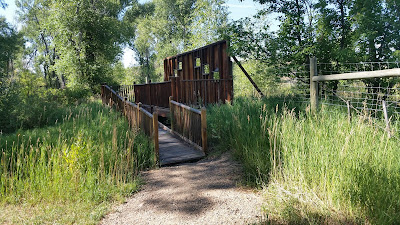 We weren't sure if we wanted to stay. The water in the Yampa river is really low so floating was not possible and fishing was limited to finding the holes. I talked to the folks working the front desk and they gave us a few options for moving somewhere else. We had about a week before we needed to be in Vernal, UT. That is only about 150 miles away and we had no plans, just ideas. There is another State Park not far from this one. Elkhead Lake SP was about 20 miles to the northwest. We went to check it out.

When we arrived at Elkhead Reservoir, we found the nice new campground. The only issue was no hookups and no cell signal. The campground was nice and right along the lake. The lake looked nice and because we had our boat in the truck, we decided to take a trip around the lake a do a little fishing. At first the wind was calm. 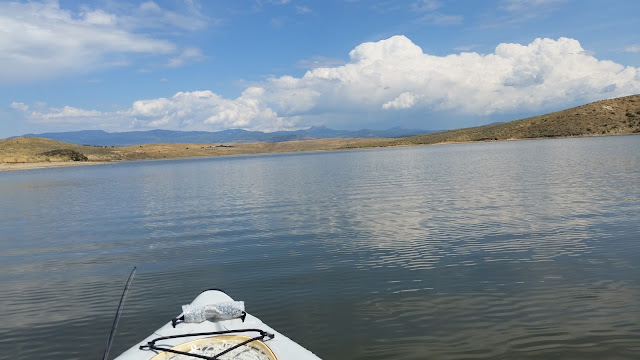 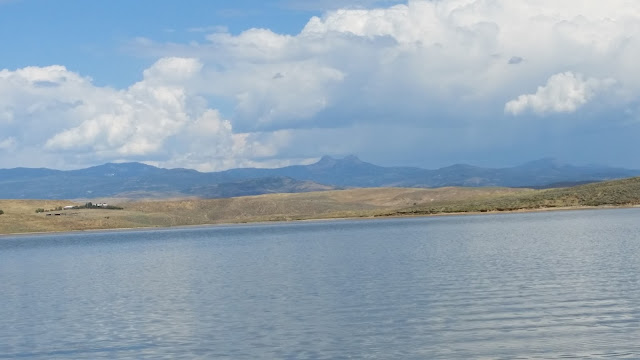 You can barely see Bears Ears Mountain across the water. We paddled around for about 3 hours and I tried in vain to end my 0 for Colorado. No fish again! The wind came up in the later afternoon, but we just hugged the shore and had no issue getting back without a major workout. Oh well, we still had a great time.

We headed into Craig to do some local business and then headed back to the rig. It was getting hot and we had electricity. On the way back we saw a number of large flocks of Sandhill Cranes. We saw them in large flocks and smaller groupings in the fields and flying during our entire stay. I was never able to get a good picture of them with my camera.

We looked at the forecast and it was going to be hot through the weekend. We decided to just stay put and I would see if those fish I saw feeding would give me a look.

Then on August 24th the streak ended! I got back to the type of fishing I love. River fly fishing. I went to a river access point about a half mile from the campground. The state of Colorado has about 10 river access points along the Yampa. I watched a few small ones feeding on the top, then a much bigger one took a bug off the top of the water with a big splash. I made a good first cast and watched in delight as a small brown trout took my hopper pattern. A short fight ensued and he released himself just as I was reaching for him with my net. A made a few more casts and then I guess I made the one he was looking for. He hit my fly with an aggressive "smack". We had a little tussle and then I was able to land him in the net. 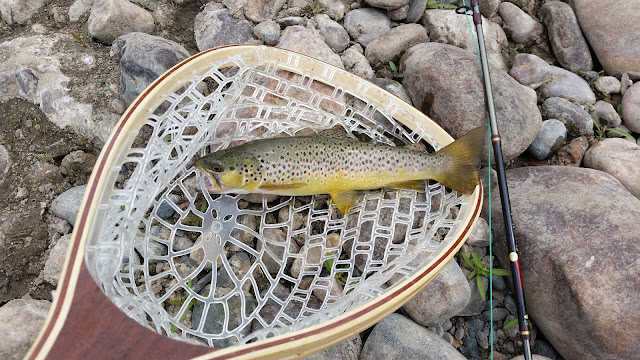 Not a great big fish, but at least the drought was over.

The second morning we were there, I was walking along the creek and met a very nice couple and their three dogs. The dogs were very interesting looking. The breed is called Toy Eskimos. Charlie and Suzie are very interesting folks from Lockhart, Texas. We stayed at Lockhart State Park last year. I loved the place. It had an awesome 9 hole golf course. The two of them have spent all of their adult lives involved in teaching. Charlie was the principal of the Lockhart HS and Suzy taught at many different levels and then went on to giving seminars using the tools she developed. They love to spend time traveling in their Motorhome. Suzie had put together an extensive catalog of children's books and songs that she has written and performs on a CD. If you have an interest in putting together a curriculum for children or just want to teach your children or grand children some fun and educational songs. Check out kidswings.com.

They invited us over to play a game called Convoy. We had a blast. If I remember correctly, Charlie and I are the reigning champs. We enjoyed the time together. Here is Charlie and Suzy: 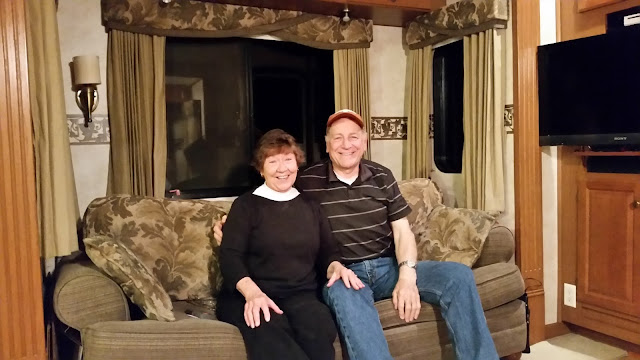 We just love meeting great people on the road. If you read many blogs written by RVers, you would see them all say that the people they meet on the road is the best part of this lifestyle.

I will write more about our time in the Yampa Valley in my next entry including a fun day in Steamboat Springs.
Posted by ktmissouri at 8:24 PM