Strange Situation and Some Water Skiing

On September 16, we drove from Webster State Park to Fancy Creek State Park. The drive was only about 160 miles through the Kansas countryside. We arrived at about 2PM. Kansas State Parks have been OK, but not great. It looks like they are underfunded and under used. Fancy Creek was no different. There are multiple loops that are not well marked and there is no camp host in the area. We drove around and finally found a spot that would work along the river. It was Friday night, so we were concerned about the place filling up for the weekend.

We pulled into this site with a nice view of the river and noted that there was no reservation on the post for tonight. I then took a 3 mile hike through the park and back to the front to pay for one night. I went to the highest point in the park and took a few shots of the surrounding area. 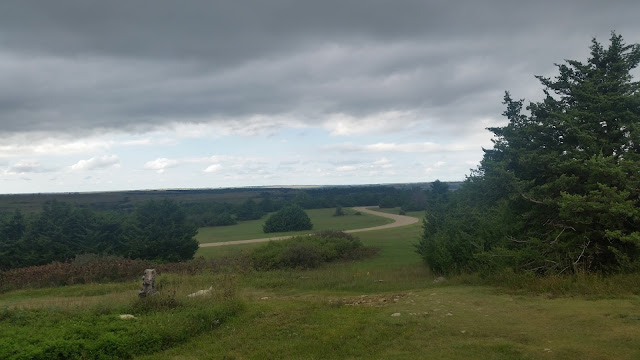 This looked like a quiet place to spend the night. Here is a shot of the site that I took the next day. 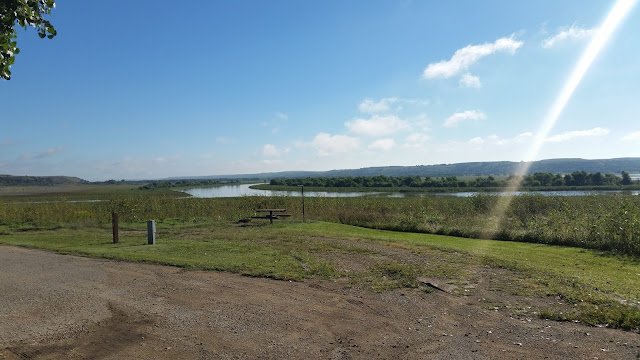 I was in the middle of fixing dinner at about 6 PM when a camp host came to our site and told Kim that he had forgotten to put the reservation cards out on the sites. There was a reservation on this site for tonight. He apologized, but what could we do? We could hope that they were not going to make it and stay where we were or we could move to a much more undesirable site. It was closing in on darkness and I really did not want to move in the dark. We had dinner and discussed our options. We decided to take the safe choice and move before it got dark. We also decided that we would let Kim do the moving. We moved to a pull through site, but it was very unlevel and a tree caused us not to be able to open one of our slides. It was not great, but it would work for the night. To other RVers, What would you have done? 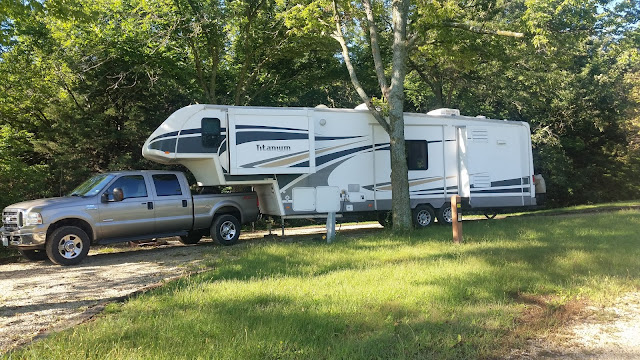 The picture of the empty site above was taken to help me remember that no one ever showed up for that site. We would have been fine if we did not move. Oh well.

I was able to back the rig out of the site without issue the next day and we were on our way to Missouri. We drove for about 150 miles to make it to Kearney, Missouri. My friend Dave and his wife Suzy live there. They offered to let us park in front of their shop for a night while Dave and I went water skiing. Dave is a former brick layer and built an amazing house out of block and brick. I wish I had taken a picture of it, but it was awesome.

We ended up driving straight to the private lake that Dave and his friends ski on. It has always been my dream to have a private lake to ski on. This one is awesome. I could live in that little house right by the course. 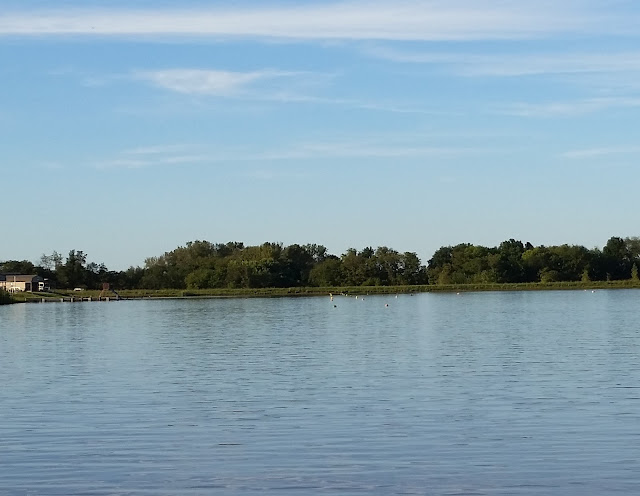 The best part of going skiing was getting to watch a few of Dave's friends ski. Joel is 50 years old and is skiing just a few buoys off of the world record. He is very tall and is an awesome skier. 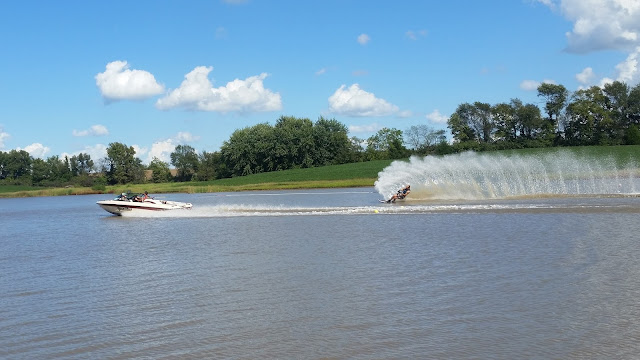 I got one other good shot, but I am not sure who this one is. 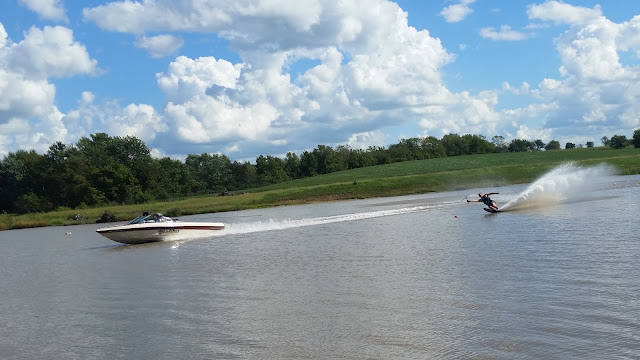 Dave skied well. It is great to see how much he has improved in the past couple of years. Dave has skied for years, but has only been skiing on a course for 2 years. His enthusiasm for the sport is infectious. I skied 4 passes and was not happy with the way I am skiing. Oh well, what do you expect? I really need to train hard and ski a bunch to ski on a course at my age. Maybe next summer?

We got up early on Sunday morning and went back to the lake for more skiing. Dave skied first and did very well. I was really enjoying driving his boat. I just love to drive inboards. I skied one pass without incident and then when I was getting up for my second pass, I heard a pop in the back of my right leg. I immediately knew what had happened. I strained my hamstring. I just let go of the handle and settled into the water. Darn, did that hurt. Dave had to help me get my ski off. When I got out of the water, I could barely walk. I have done this before and I knew it was going to take a while to recover. No more skiing for me this year. My immediate concern was helping at the ranch for the upcoming events. Here is a picture of the bruising on the back of my leg a couple of days later. I did it good. I always seem to. 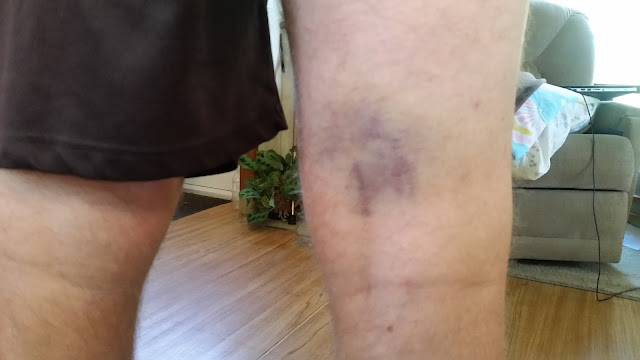 We decided to get loaded up and head south to the ranch. The drive was uncomfortable, but I knew it would be worse the next day as the soreness settled in.

That brings us back to our base in Missouri at the Hardwood Hills Ranch. I am writing this on a rainy day on the 12th of October. We have been very busy since we have been here. We had those two events and I also had a number of things on my to-do list. I will do a couple of entries about our time in Missouri to get some grand kids updated pictures in the blog and to detail an upgrade I did to the trailer. We expect to leave here on the 20th to head south to Arkansas. Come back to learn more about Solar power and living off of the grid.
Posted by ktmissouri at 10:52 AM