We stayed in Russellville, Arkansas for 4 nights. We loved our time with our son and his family. We also had a chance to catch up with some friends that are from the area.

We had a chance to spend some time with Michael, Audrey and the kids on Thursday evening and then we planned to go to the Russellville HS football game on Friday night. Connor had a class thing and was going to get to go out on the field with the team. I sent a text to my friend Ken to see if he wanted to go. He told me that RHS had a very good team this year and had been wanting to go see them play. Perfect! Here is a shot of Ken, myself holding Cam and Con sitting next to me. 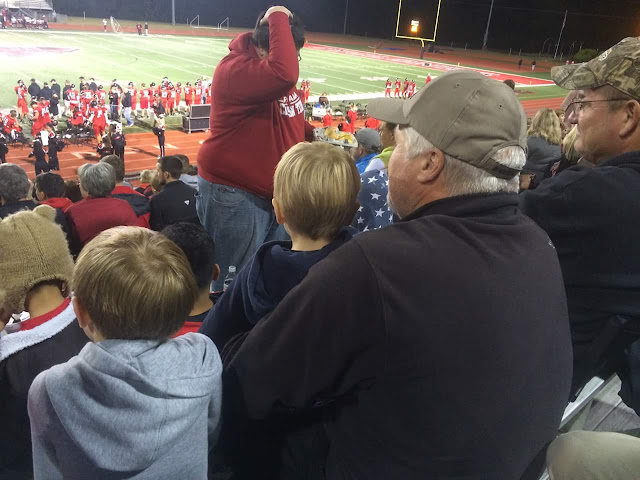 I just love HS football games. We had a blast talking and watching RHS dismantle the team from Texarcana. Did you know that there are two High Schools in Texarcana? One on the Arkansas side called Arknasas High that have the nickname of the Razorbacks. They use the same colors as UA in Fayetteville. The one on the Texas side is of course called Texas High and the Longhorns are the school mascot. I did not know that. 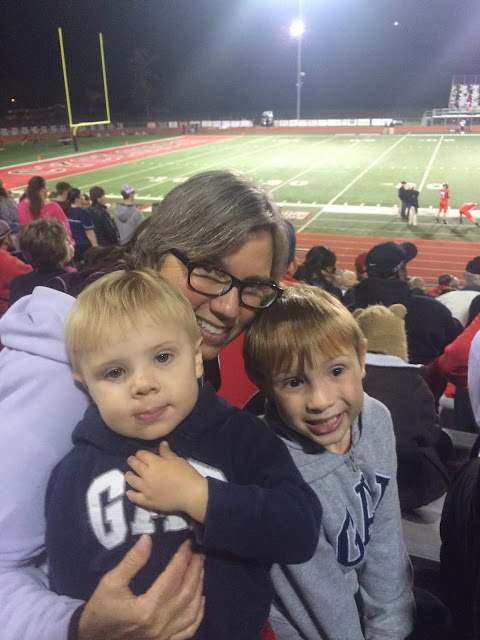 Even Kim enjoyed the game until it started to get cold. We turned on the heated seats in the truck on the way home to warm our backsides after sitting on the cold bleachers.

We got up early on Saturday morning to watch a soccer game that Connor was playing in. I did not get any pictures. We went by Dick and Cathy's for a visit and then went to lunch. Dick aced me out and bought lunch. Thanks Dick, I owe you.

We went over to Michael and Audrey's for dinner. We had to get some tickle snakes and horsey rides in. I just love playing with little kids. 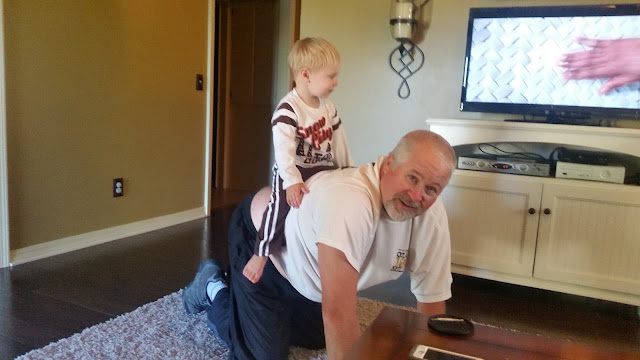 We then took Connor back home with us. We love that one on one time. Connor was up early, so we took a long walk, played on the playground and then did some fishing. 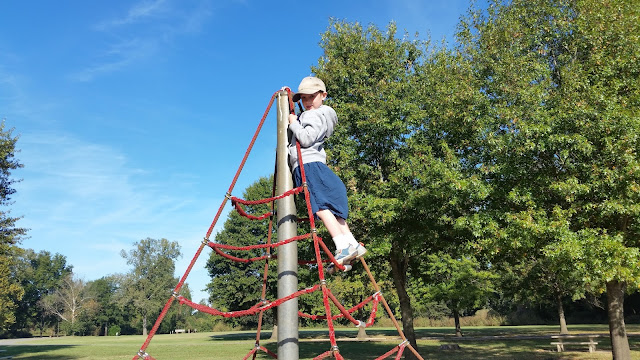 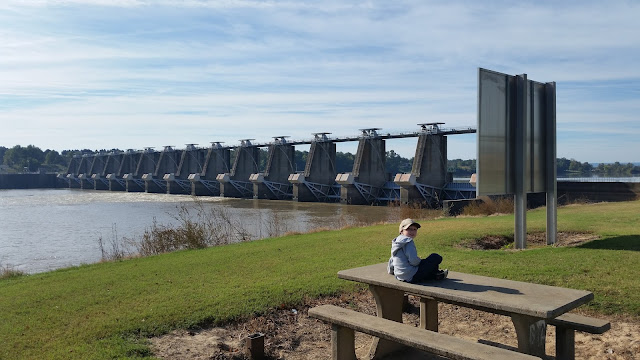 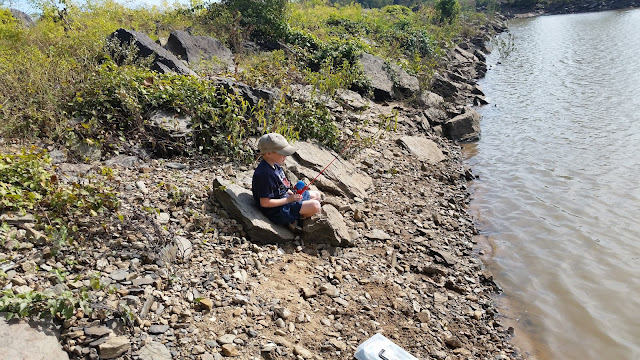 Connor did not catch any fish that first day, but caught a nice little large mouth bass all by himself on the second day. He was pumped. 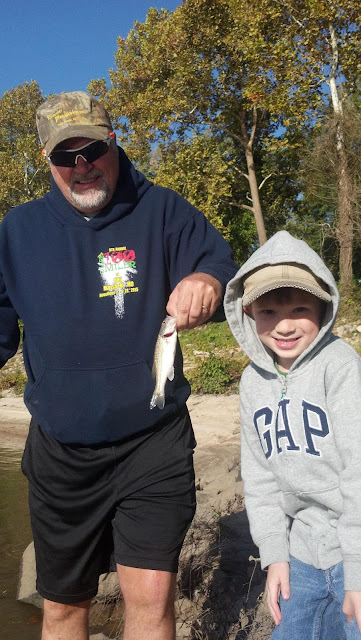 Michael and Audrey came over and dropped off Cameron and took Connor to do some shopping and one on one time. I got some one on one with Cam. He is so funny. We took a walk or should I say, I got to carry him over to the playground. 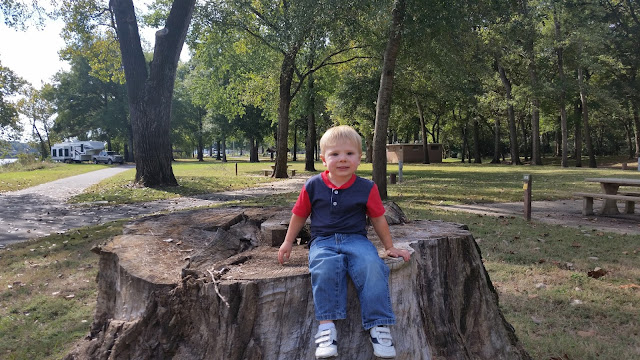 Then we saw the "Big Boat" as Cam called it. We really like to watch the barge traffic on the river going through the locks. 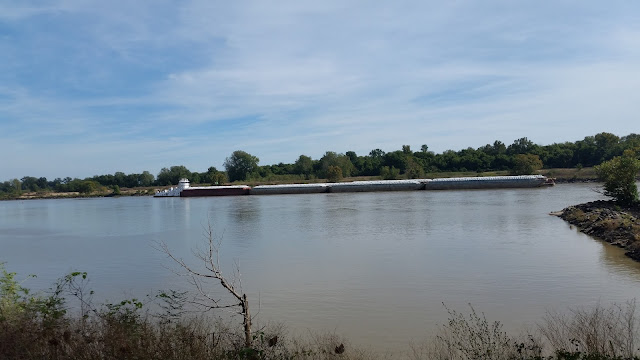 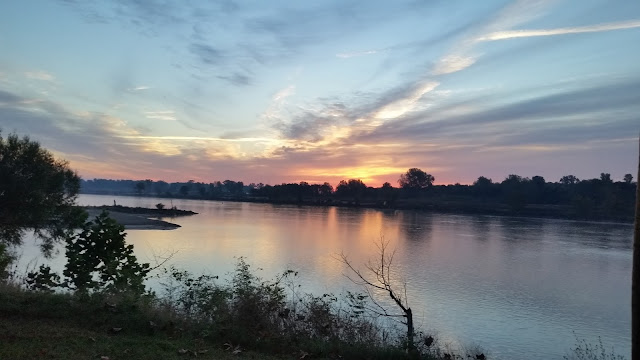 We got up early the next morning and Kim fixed biscuits and chocolate gravy. Our friend Cathy put her up to that. It was actually quite good. 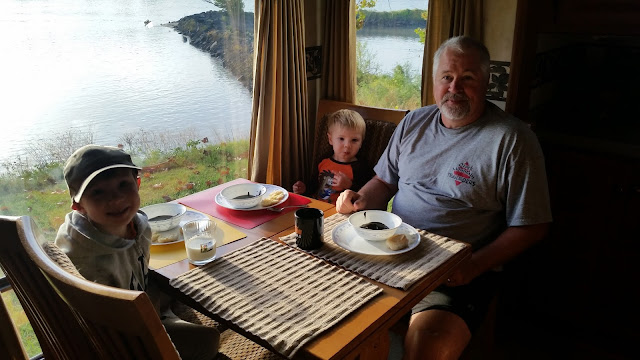 We loved our time together. Audrey came back over on Monday morning after a parent teach conference. She took this great shot: 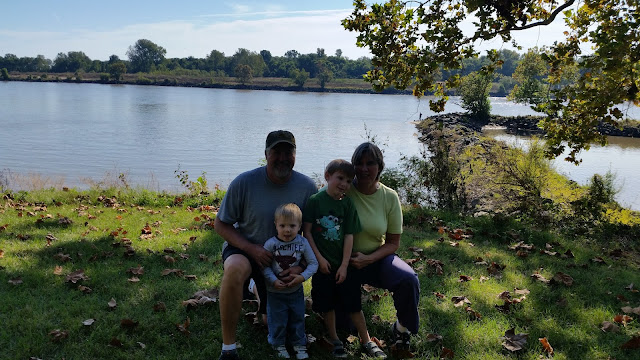 We were needing to get going on down the road, so we started going through our routine with the boys watching. They were pretty amazed by the slides and hitching up to the truck. We said our goodbyes and we were off to who knows where. We sure will miss those guys.
Posted by ktmissouri at 11:14 AM