We left Morrilton, Arkansas on Monday, October 24. We had a destination in mind, but had to keep in quiet. We were heading to Galveston, Texas. There was a big surprise 80th birthday party planned for Kim's dad, Richie on Saturday the 29th. In all of those years when I was working, I missed many of these important family gatherings. I love the fact that we can include them in our travels and get there early and stay well past the event. We even had reservations for this at an RV park right across the street from the party location for October 27 to November 3. We would also be 50 yards from the beach in a full hook-up site. We were excited.

We had four days to travel 530 miles. We decided to just wing it and picked out a few COE parks along the route as possible stopping points. After deciding to stop we would check each place out and decide if we would stay one or two nights. This is the way we love to travel.

The first park we stopped at after driving a bit over 200 miles was Piney Point Campground on Wright Patman Lake, just over the Texas border near Texarcana. Our first impression was good. There were huge pine trees and we were sitting on a bluff overlooking the lake. The gentleman checking me in was extremely nice and helpful. He did tell me that half of the campground was closed to to some flooding that happened earlier this year and it had not been repaired. Here is a shot of our site: 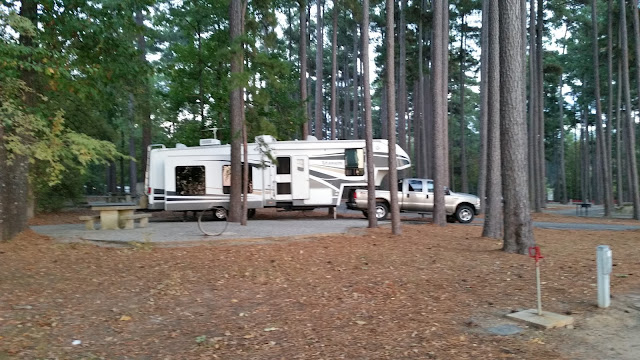 We had a beautiful view of the lake and even had a nice sunset that evening. 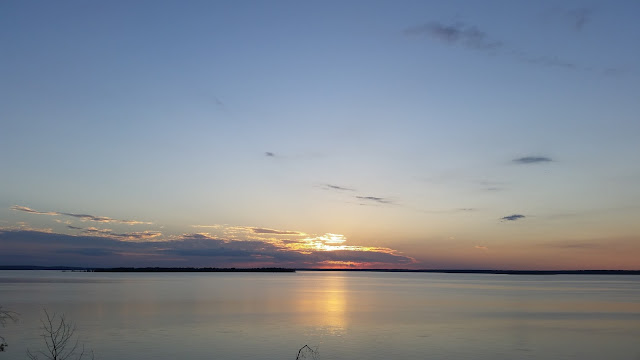 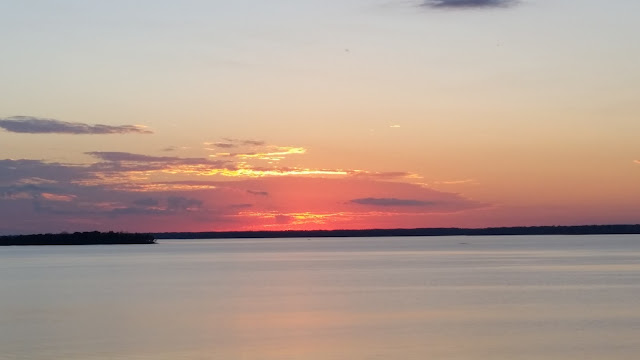 I woke up the next morning to a strange smell. I am not sure what it was, but it had a hint of petrochemical. I decided to go for a walk and see the rest of the place and get some exercise.

It was amazing to see the damage caused by the flooding and how high the water was compared to where it is now. 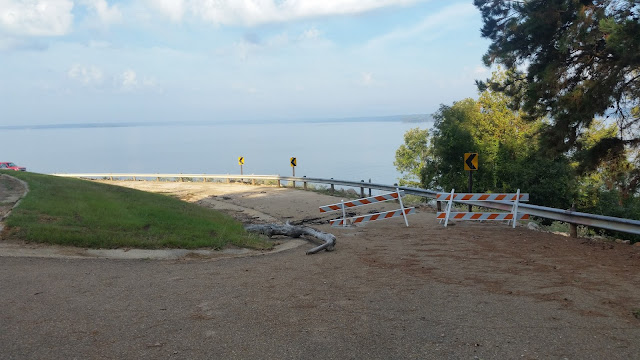 As you can tell by the picture of our rig above, we were able to get level without disconnecting the truck. We decided to just stay one night. We did have good Cell signal on Verizon and 9 TV channels on OTA. The rate was a bit high at $24, but not too bad.

It was easy to get ready to move. We drove another 200 miles to Sandy Creek Park, another COE park on B.A. Steinhagen Lake near Jasper, Texas. I chose this park because the COE parks just north of there on Lake Sam Rayburn were $26 and this one was $16. I was ready for a sub par site, but boy was I wrong. When we pulled in the man at the gate told me the $16 sites were 30 amp, but he had site 31 that had a great view of the lake and was 50 amp and cost $18. That sounded good to me. Here is a shot of the site: 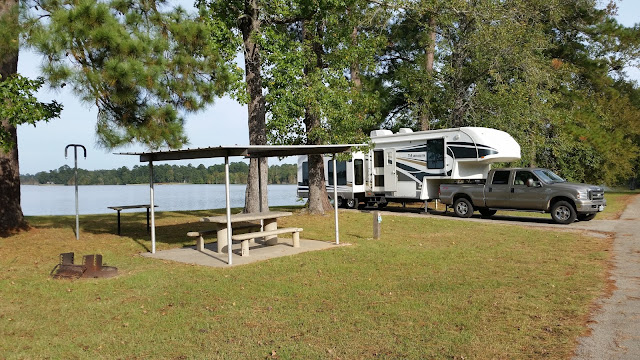 The view was awesome and this was a very quiet park. No road or train noise and even though there were a few other campers, they were mostly in another section. Many of the sites were huge. We were once again able to get level without disconnecting. We loved this place. We could have made one more stop on the way to Galveston, but decided to stay two nights and relax and enjoy the quiet. We were only 150 miles from our destination, so the travel was working out fine.

I took a long bike ride through this park and really enjoyed it. The lake is very shallow and some areas resemble a swamp, but we did not have any issues with critters. We would definitely come back to this park.

Up to this point our drive was uneventful, but we still had to drive on to Galveston island via a ferry at Port Bolivar. We were planning to completely miss Houston. I will write more in my next entry about our arrival in Galveston and getting ready for the big party.
Posted by ktmissouri at 2:31 PM