I am writing this entry on March 18 from Horseshoe Bend Campground near Coulterville, California. Our daughter Shannon and SIL Brian and 1 year old Amelia left this morning to head back to the airport in San Francisco. We had an amazing time with them while they were with us. We love it when we get visitors. Blogging has taken a back seat to full time adventuring during their visit. I will now try to start getting caught up.

We were staying at Laguna Mountain BLM area, which is only about 30 miles from Pinnacles National Park. I have to be honest, I had never heard of Pinnacles before we were looking at the map planning our trip through California. When I noticed it, I asked Kim and she had not heard of it either. Pinnacles has only been a NP since 2013, but has been a National Monument since early in the 20th century.

You can make a visit from either the East or West Side of the park. There is no way to drive through the park, so you have to choose one or the other. We were closer to the East side, so we visited the east side of Pinnacles on this visit. The west side would have to wait for another visit in the future.

Pinnacles is known for some high rock spires that looked beautiful in pictures. When we arrived on this Saturday, the park was busy due to the weekend and the beautiful weather. It was warm and sunny and we were in shorts. We were stopped at the small visitor center and told we had to park the truck and take a shuttle bus up into the park. We rode the bus up to Bear Gulch, which we would use for our base for the day. We could then see some high rocks, but nothing too impressive. 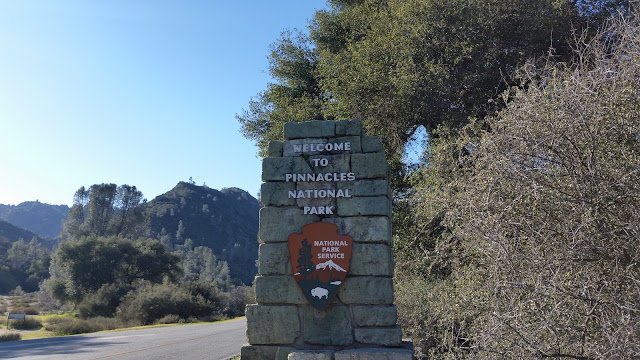 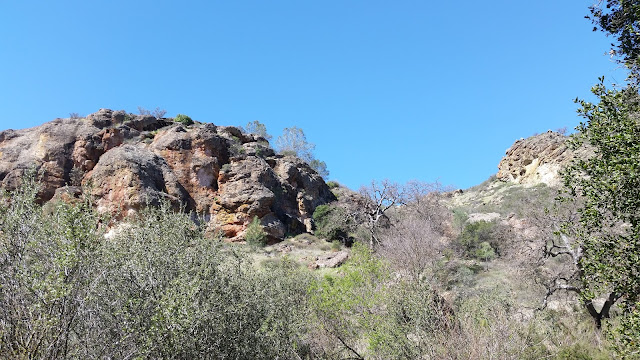 We talked to a ranger and he recommended that we start with the cave trail. That was an excellent suggestion. We headed up a fairly steep trail for about a half mile before we hit the caves and larger rocks. We saw some rock climbers along the side of the trail. Rock climbing is a favorite activity in Pinnacles. 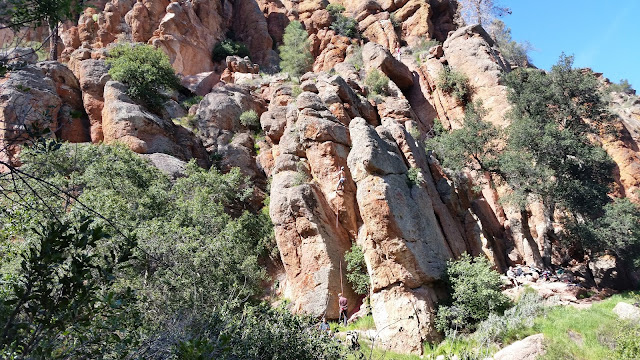 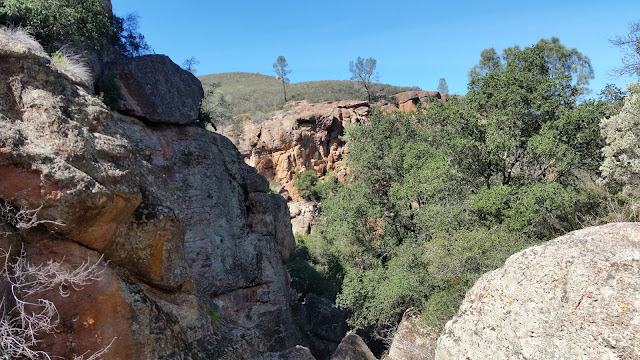 The caves are not natural caves. There are deep rock gorges in the area. Over the centuries, large rocks have fallen from the higher areas into the gorges and created openings. Those openings were expanded and stairs and railings were installed by the CCC back in the 1930's to create the trail we have today. It is very interesting and the lighting creates some interesting views. It is not overly strenuous, but we had a cub scout troop ahead of us and some of the smaller kids were getting a little freaked out by he dark and heights. There is a creek that runs through the canyon and the caves. One section was closed due to high water. 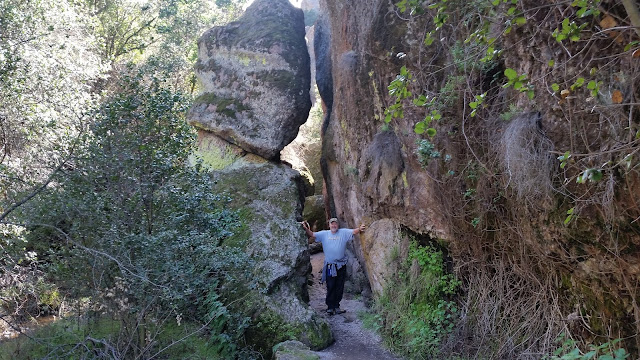 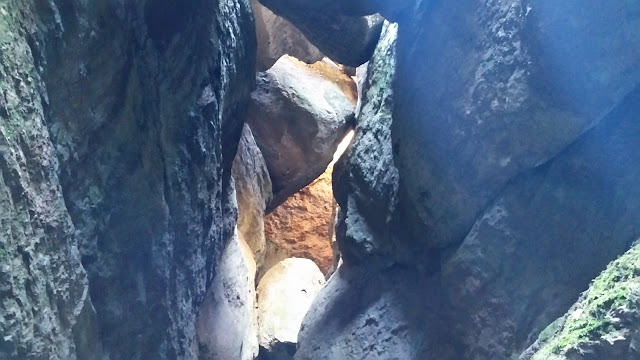 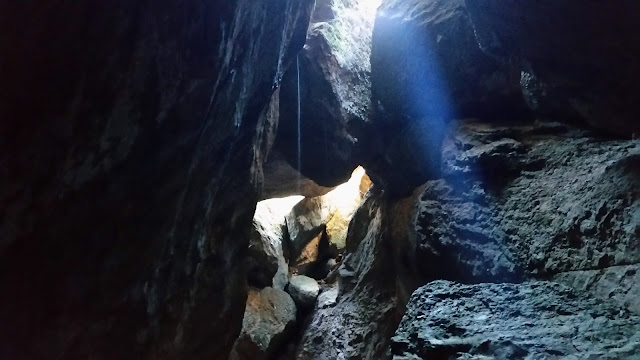 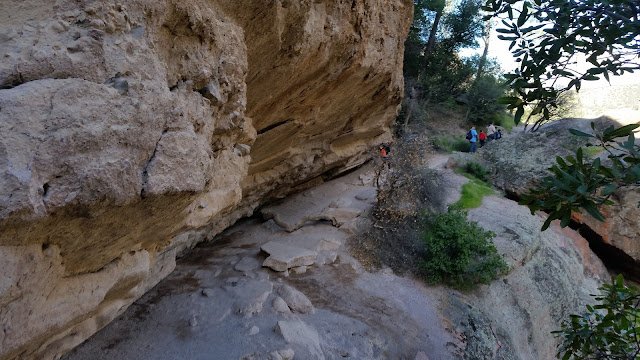 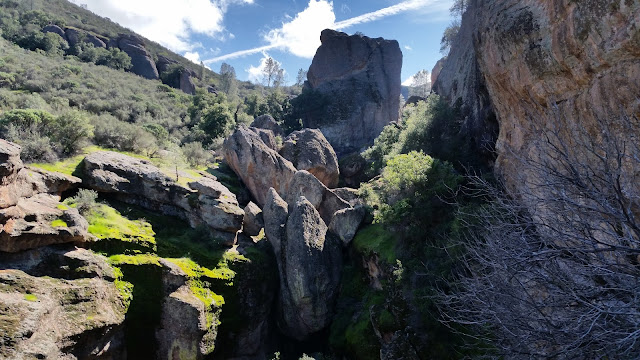 We hiked for about an hour and it was fun and interesting. I had my eye on the larger spires above us and really wanted to go up and take a look. Kim was not as enthusiastic. When I suggested a hike up to the California Condor overlook, she told me to have fun. This trail was all uphill with no breaks for a little over a mile. The views were as good as expected. 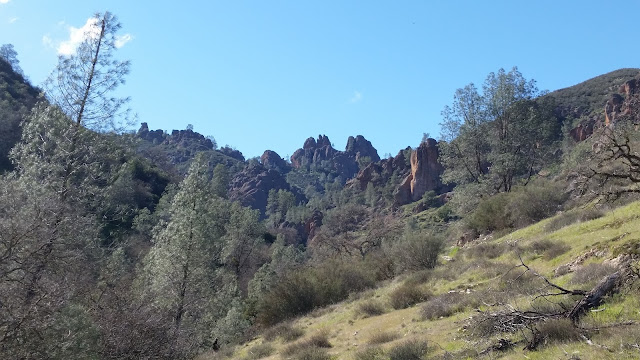 The trail was lined with some early spring flowers including this nice Indian Paintbrush: 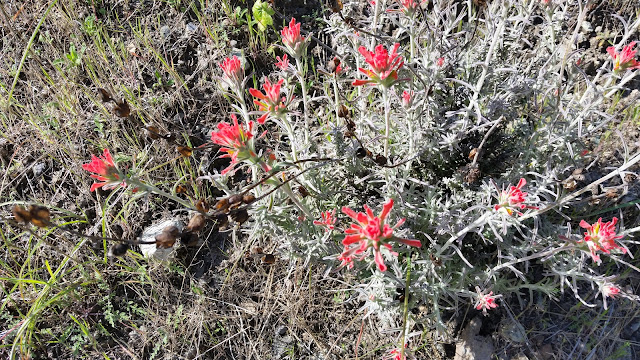 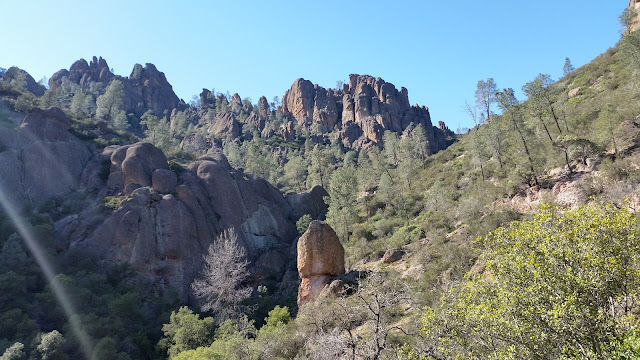 After some significant huffing and puffing I made it to the overlook and enjoyed the view. 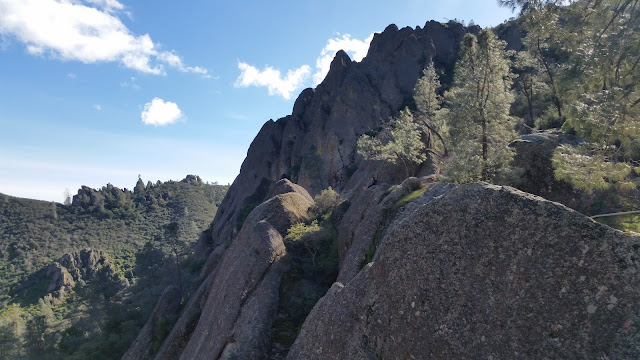 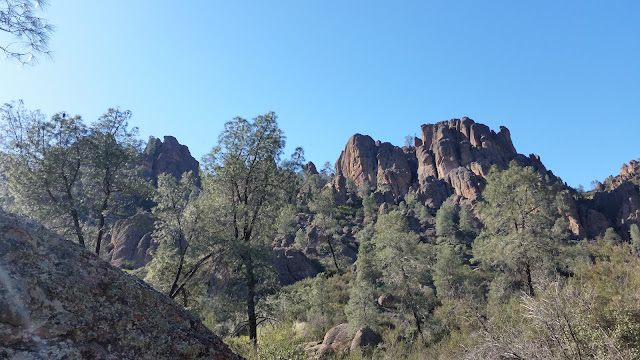 The walk down was fun and fast. I did not stop once. This hike was good training for what was to come.

We really enjoyed our short visit to Pinnacles National Park. There is a campground on the West side of the park, but it stays pretty full. Electric sites are $38 per night and are packed in pretty tight. We were very happy with our decision to stay at Laguna Mountain.

In the middle of Saturday night a major cold front arrived. We had high winds and rain. We pretty much stayed in the trailer all day. Later in the morning it started to SNOW! It was very pretty and we stayed warm inside and enjoyed the view. We got about an inch of accumulation, but I had to be quick with the camera, because it was gone in an hour. 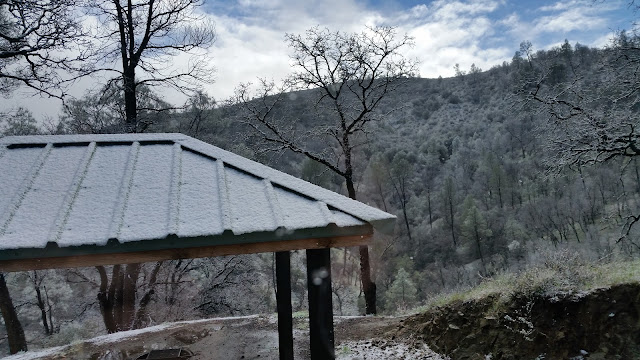 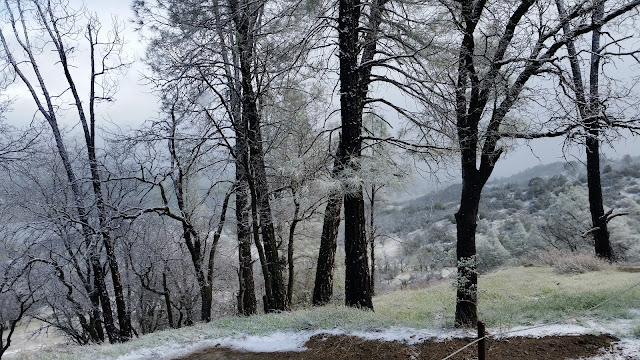 We spent a couple of days inside and let the ground dry. We had one other camper in the campground over the next three days. We were loving the isolation. We needed one more stop before we met up with Shannon and Brian, so we decided on a park a few miles north. We were ready for a grocery store and electric hook ups. I will write all about our next stop and some time in the San Francisco area in my next entry.

Posted by ktmissouri at 7:44 PM