I am writing this on March 5 from kind of an amazing place. We have not had cell signal for the past 5 days, so I am not sure when I will be able to post this. I am sitting here watching it snow! I will write all about this place in coming entries, but for now, I will write about our time in San Luis Obispo (SLO).

We left Jalama Beach on February 26. We did not have a great plan because we had not had internet for more than a week and I had not done my normal level of research. We drove back on that 12 miles of very twisty road to reach Highway 1 and then headed north to Lompoc. Once we reached Lompoc, Kim used my phone to do some research. I had tentatively found a place called Lake San Antonio. She looked at the website for this regional park and although it did not come right out and say it was closed, she thought it looked like it might be. (I later found out it was indeed closed) We were driving along through the Pismo beach area and we thought about camping there on the beach, but that was closed. I guess the bad Pacific storm from the previous week had things in a mess around here. Kim started telling me about a place just outside of SLO called El Chorro Regional Park. I asked her where to turn and she said, “you just passed it”. Well, you see, I have this wife that is always right. I knew we needed to get turned around. I hit the next exit and went through town to get back to highway 1 and then out of town about 6 miles to El Chorro. We went in and I saw a golf course, but that was probably too expensive, but the park looked nice with huge sites. We could stay in a no hookup site for $23 per night. Full hookups were $37. We had 4 bars of 4G Verizon, so I was pretty happy. We paid for two nights, but ended up staying 4. This was a perfect place to explore this area. You can see in the picture below, the recent rain had this place looking green and beautiful. 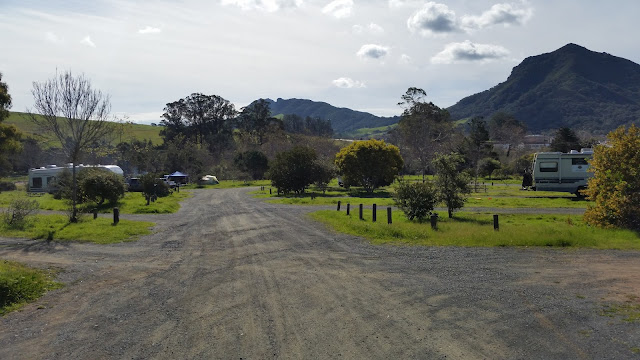 The first morning we headed out to the coast. I had received a greeting from another camper on Rvillage that was staying in the park and gave me the “Must-See's”. First up was Morro Bay. Morro Bay was only about 10 miles from the park. This is kind of a small touristy type town, but it is off-season and there was not much going on. Just a beautiful little town to walk around and check out the bay. 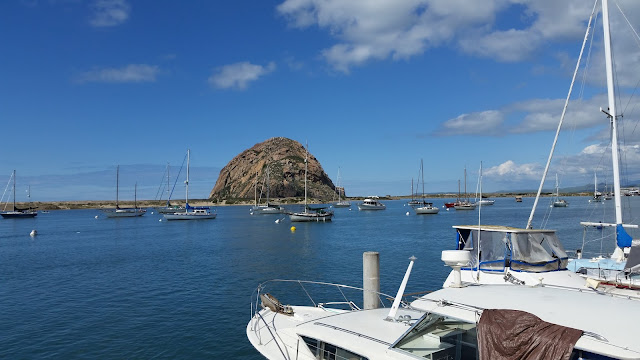 We walked around town and did not stop in one shop. We really don't need anything and shopping just is not our thing. It was still a nice walk. We did see a few seals in the bay and two sea otters. 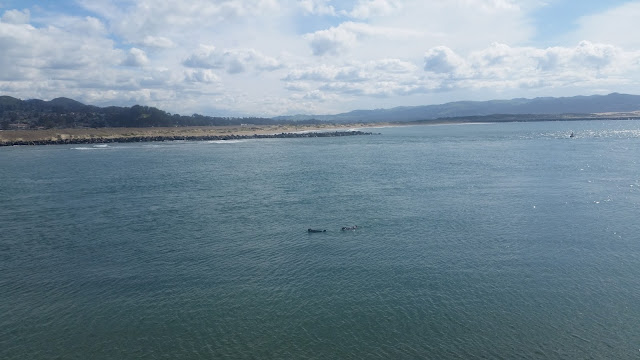 We then drove over to the large rock in the previous picture and walked around and enjoyed the nice day. 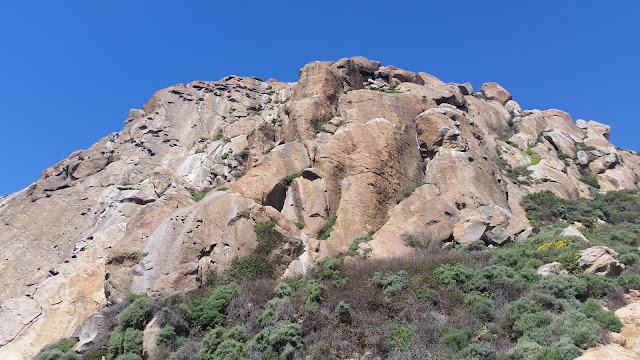 We then drove on Highway 1 through a number of coastal towns and by the Hearst Castle. We were heading down to see the Elephant Seals at the Piedras Blancas Rookery. We were amazed when we arrived to see hundreds of seals just lying on the beach. We had a volunteer come over and give us some excellent information. She stayed with us for a while and told us what was going on a what their life cycle consisted of. The males are huge. We loved it! 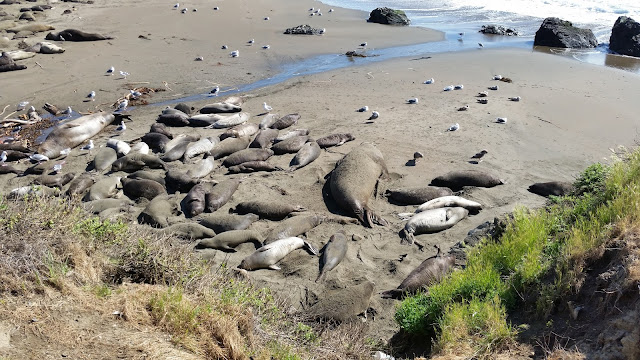 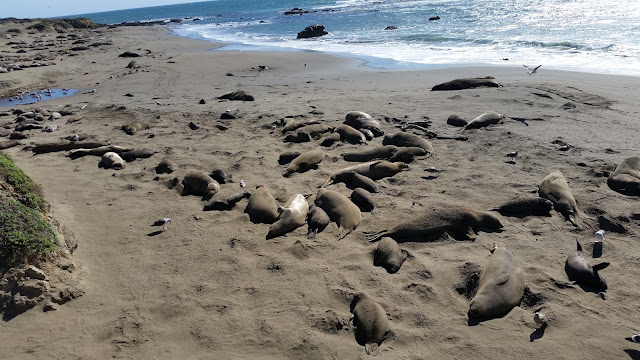 They were actually more active than it looks in this picture. We watched the new pups nursing and the interaction between the entire colony. After an hour or so, we went to an overlook to have lunch. There is no shortage of beauty on this coastline. Then we stopped at Moonstone beach and took a walk along the beach and boardwalk. 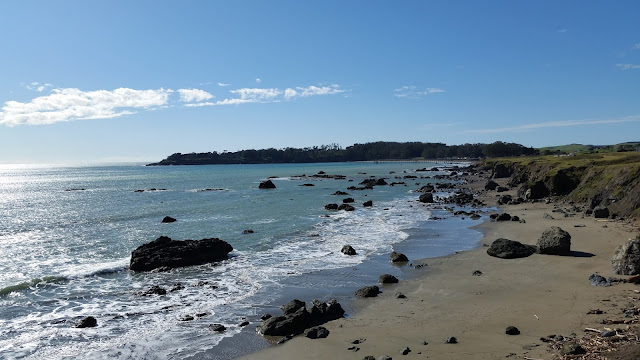 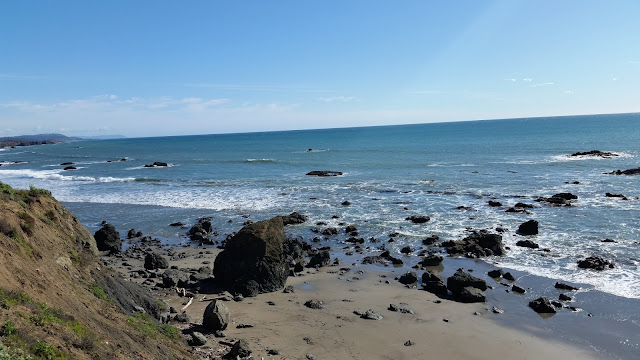 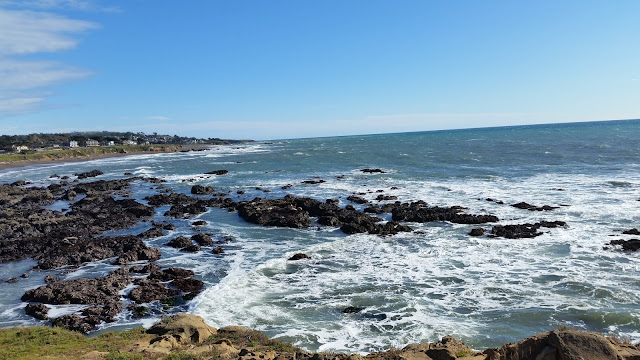 We then drove inland to take care of some boring stuff. Once a month I need to get my prescriptions refilled and the closest Walgreens was a few miles away. The drive was beautiful as we left the coast and headed up into the hills. The hills were as green as I have ever seen. 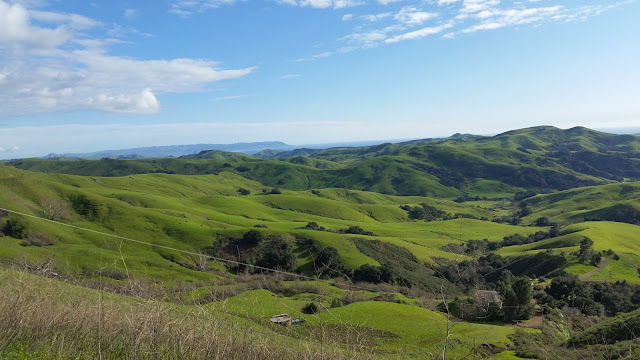 As we dropped down into the first valley, we started seeing wineries. They were just one after another. Literally hundreds of them. I was just amazed.


All that and it was just day one. I will write more about out time in SLO in my next entry. This is a very cool area with tons to do.
Posted by ktmissouri at 2:50 PM