On August 11, we decided to visit Mt. Rainer National Park. Both Kim and I have been to Mt. Rainer in the past, but we were looking forward to this visit for many reasons. We would be joining my Mother, Father and Aunt for part of the day.

Our day started off with some new information. We found out that the site we were in had a reservation for that evening. We would have to move. The good news is the camp host was awesome and let us move into a site next to him that is the 2nd host site. We were all set by 10:30 and headed up to the NP. 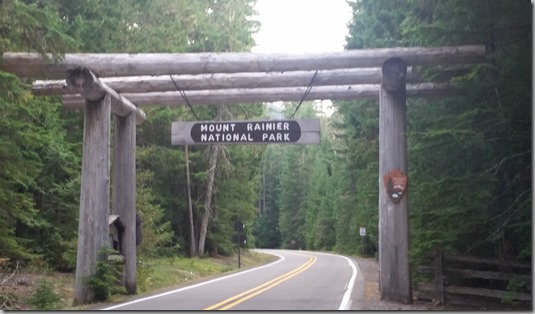 We met up with my parents and aunt along the road up through the park. We then headed up to the Paradise area. Kim and I stopped a couple of times to see the mountain from different angles.  It was a cloudy, hazy day, but I still love the pictures. 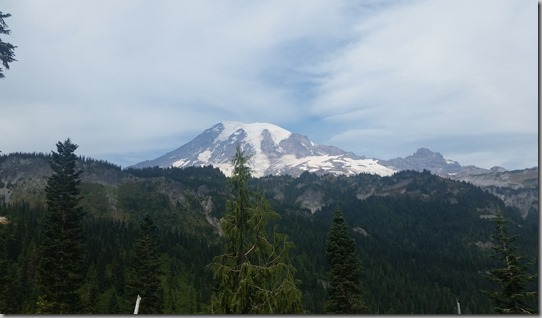 There are a number of other mountains surrounding Rainer. They are also interesting, but are dwarfed by the big one. 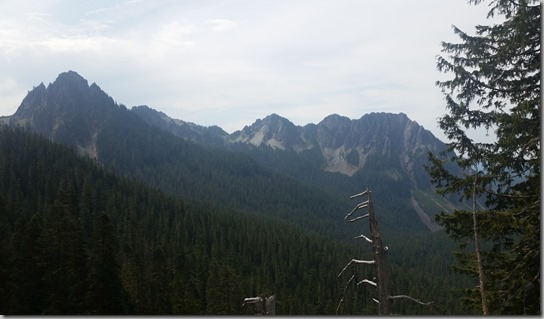 I really like this shot with my truck in the foreground. This truck has been to so many interesting places. If it could tell stories, the stories it could tell… 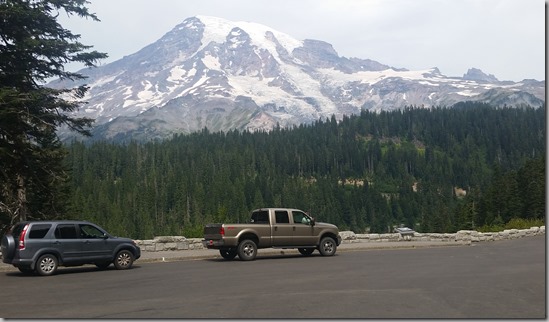 When we arrived in Paradise (I like the sound of that) we found my parents and aunt and watched a film and checked out the visitor center. It is a very nice visitor center. 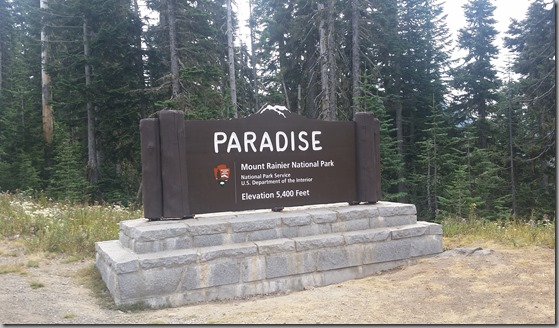 This is a picture of the lodge at Paradise. I saw a picture of it buried in snow up to the roof. About 50 feet of snow. 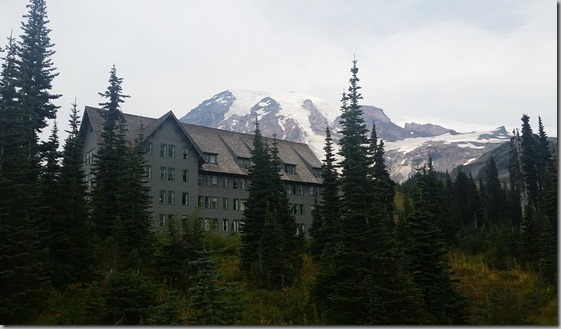 We had a light lunch of smoked salmon and cheese and fruit and my parents decided to head out. We wanted to hike up the mountain a bit and my parents stayed to watch us walk off. It was great to spend some quality time with all three of them.

The walk from the Paradise Visitor center is very steep. We were not sure how far we would go. We walked for a bit and we were breathing hard and it was hard on Kim. She told me to go on and she would go at her own pace. I walked for a while and then rested for a while. As I climbed a overlook came into view. That became my goal. I walked and climbed over the rocks. I finally made it to the Moraine overlook. The views of the glaciers were awesome. 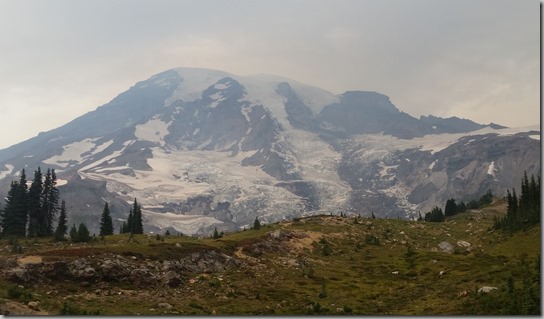 The view back down the trail was not bad either. 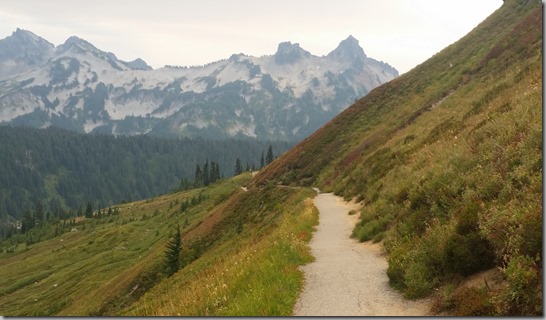 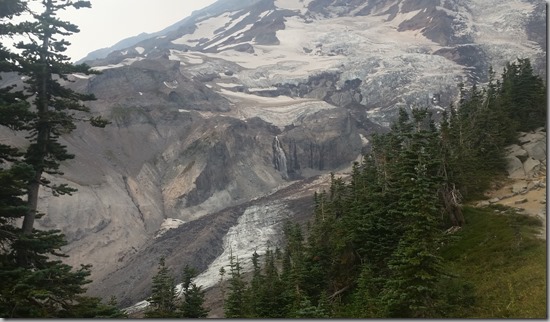 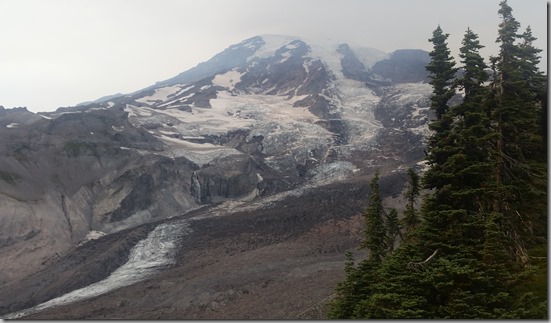 I asked another couple to take my picture and this is what they took. 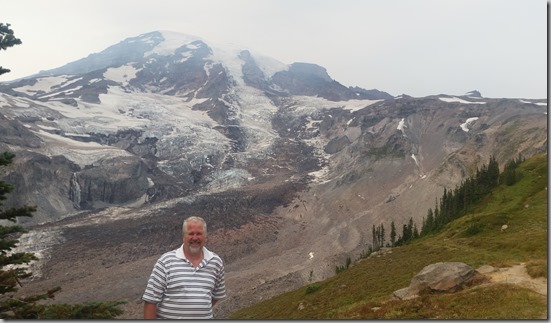 I was standing talking to Max and (I hate to admit it) his companion, that I can’t remember your name. I did get a picture of the two of you. 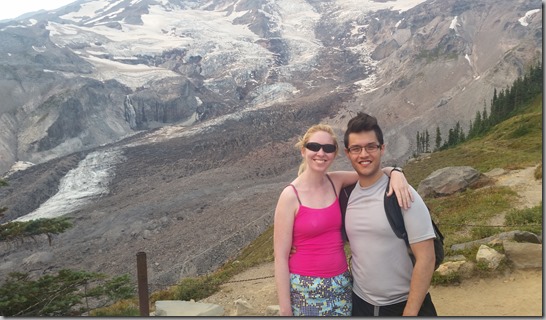 They are really nice young people. About that time, much to my surprise, Kim came walking up the trail. So, we got a shot of both of us at the overlook. 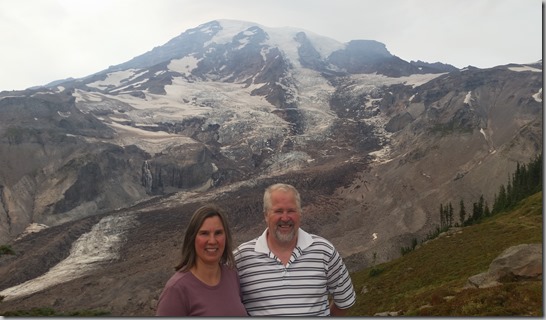 This may be one of the signature photos of the entire trip. It was getting late, so we said good bye and headed back down the mountain. We ended up walking about 6 miles, but the steepness sure added to the level of effort. We were pretty tired. During the walk down we saw these Yellow Bellied Marmots: 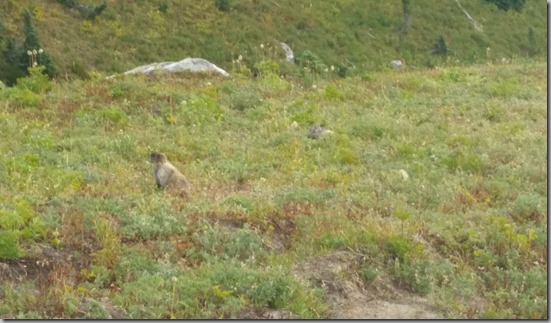 We wanted to do one more stop while we were in the park. There is a stop called the Grove of the Patriarchs. It is an area that has an old growth forest. After a short hike you come to a swinging bridge and then a boardwalk area. 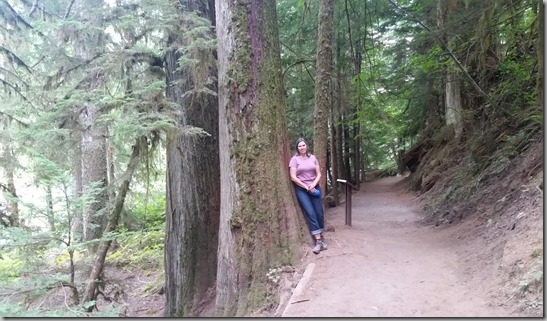 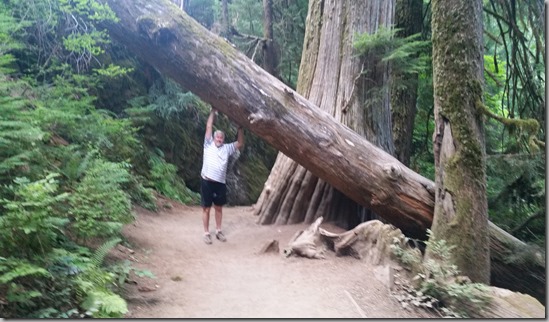 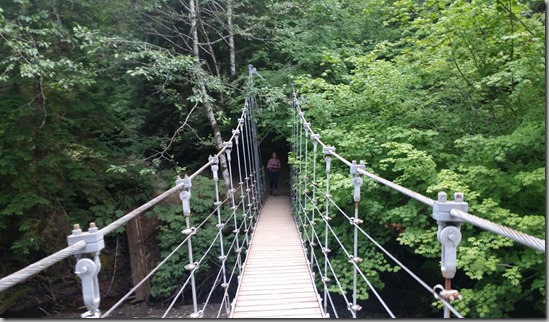 I love old growth forests, but this one is really amazing. The size of the trees are incredible. 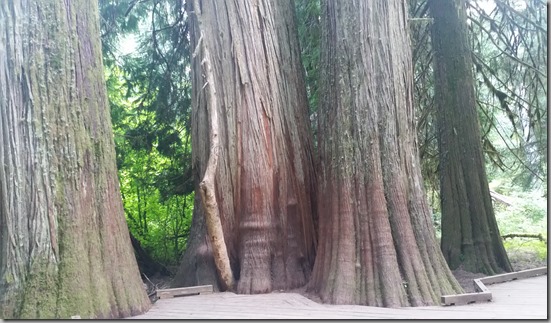 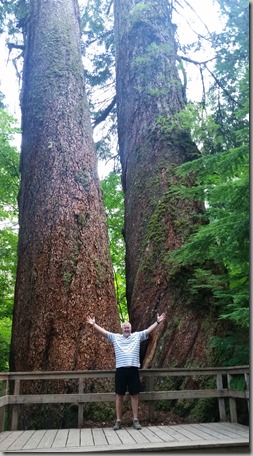 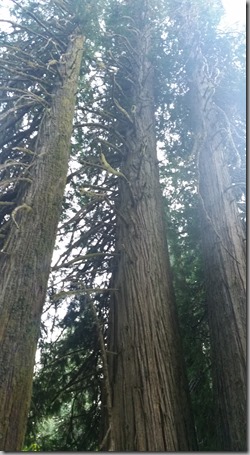 We have pictures that we have taken in other places on this trip. I remember one picture we took in Goliad Texas, of a large tree with the two of us reaching around the tree. We could barely touch fingertips on each side of the tree. Kim is hugging this tree. It would take 20 people to reach around this tree. It is beautiful. 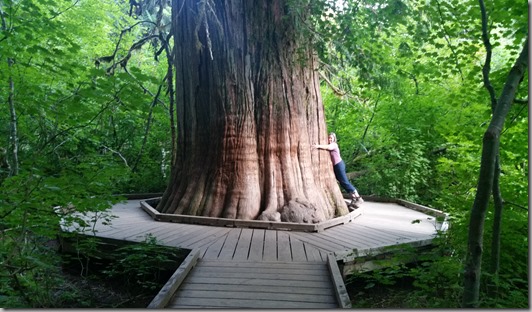 We have so much fun in places like this.

It was a really special day. The only problem is that our time is getting tight to see all that we want to see while we are in Washington. So, the next day we would move on.

We decided to head north through the Seattle area to a little town called Anacortes. This would be our base camp for the coming visits to North Cascades National Park and the San Juan Islands. Come back to see what other adventures we find and what trouble we can get in.

Posted by ktmissouri at 4:22 PM