August 14th was a rainy day in the San Juan Islands. We decided to take a short drive to Whidbey Island. You can get to that island by crossing a bridge. It is a very cool bridge as you can see in this picture. It is actually two bridges with an island in the middle. 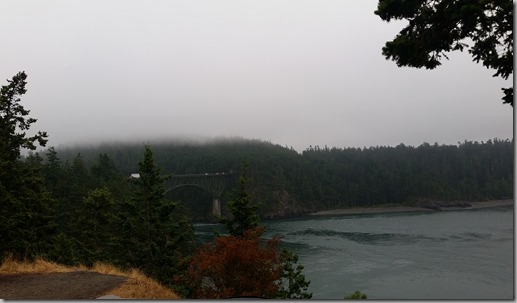 Here is a shot of Deception Pass. That is the body of water that the bridge crosses. 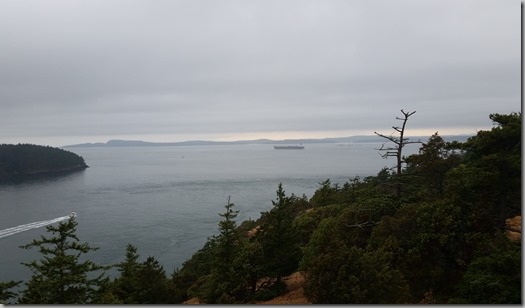 Saturday, August 15 was a beautiful sunny day. We decided to take a ferry to San Juan Island and see as much as we could in one day. We decided to walk from our campsite to the ferry landing. It turned out to be about 1.5 miles. That is a bit longer than I thought and when we got a late start it turned into a death march (Kim’s words). I thought it was a nice brisk morning walk. We made the ferry. Kim loves ferries, it goes back to her time in Galveston, Texas and the ferry there. Here she is with a big smile after we were on the ferry, ready to go. 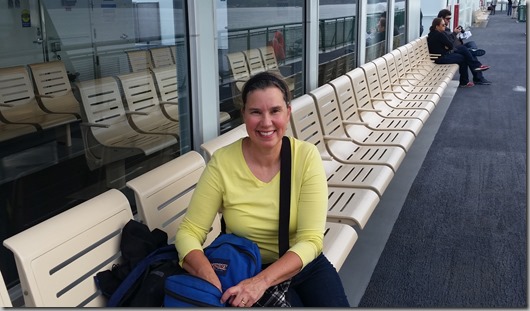 Here are a few shots as we were leaving the Anacortes terminal. 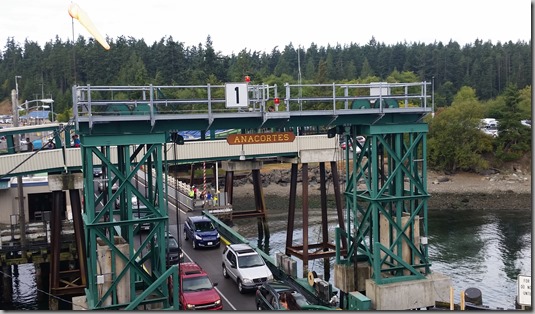 Another ferry came into the dock next to ours. This is a two slot very busy terminal. 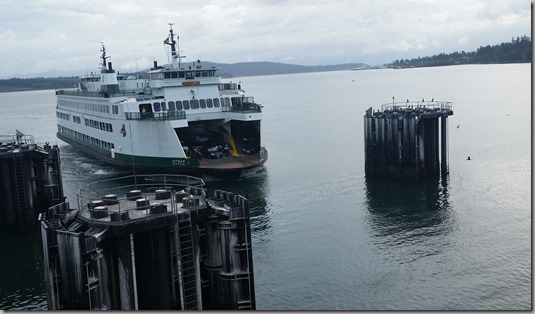 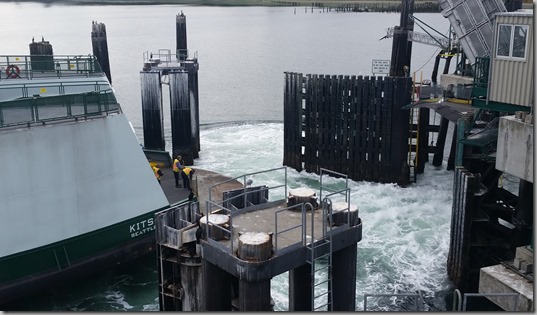 Now we were ready to leave. These things are fast. 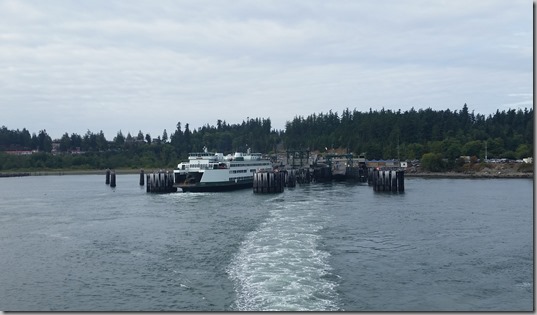 There were a lot of boats out on the water on this beautiful Saturday morning. They ranged from small to very large and very expensive. 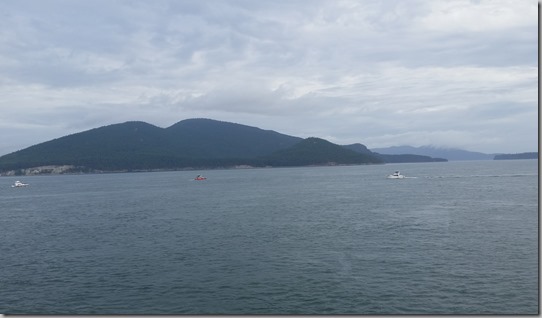 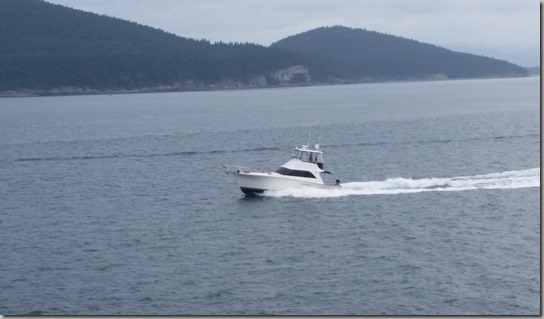 I spent the passage whale watching. I never had a confirmed sighting.

Coming into Friday Harbor on San Juan Island. It is a beautiful island and a cool little town. They have a private bus company that has service all over the island. You pay $15 for all day. We started by going to English Camp. I won’t get into all of the history here, but you can read the sign if you want. The good news is that the US and Canada had a conflict and they settled it peacefully. 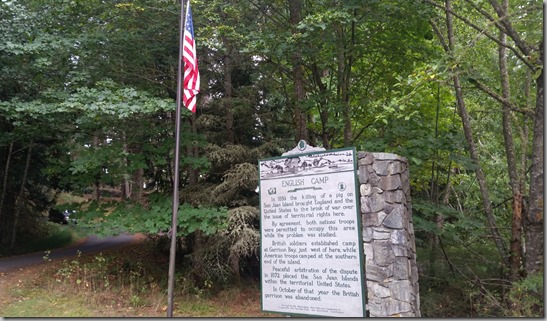 The English had a nice camp, the US camp was not as nice. 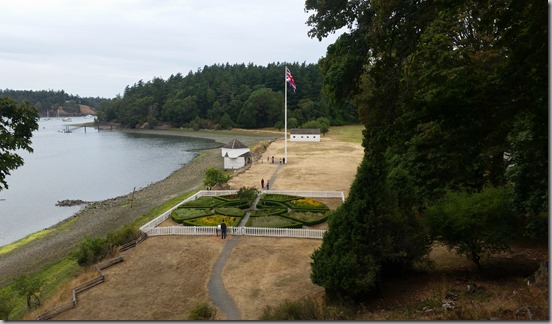 This huge large leaf maple was a central point in the camp way back in 1860. 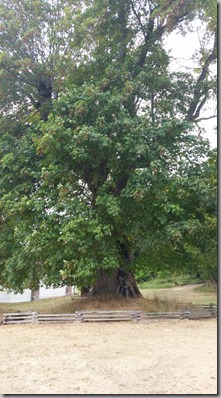 We then went to Sculpture Park. They let local artists show their sculptures. You can buy them if you are extremely wealthy. Some were good, some were just strange. Here are my favorites. The Gator: 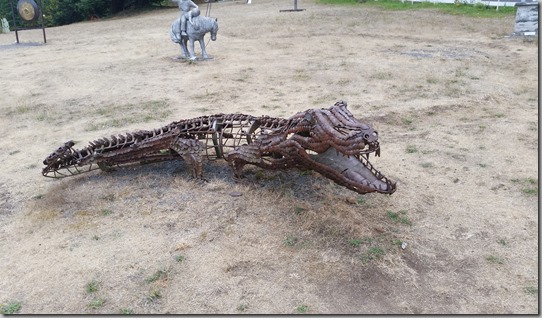 The Orca made out of engine parts: 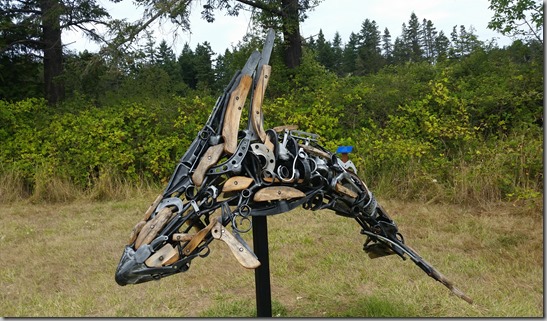 This picture is for my grandson William. A Dragon! 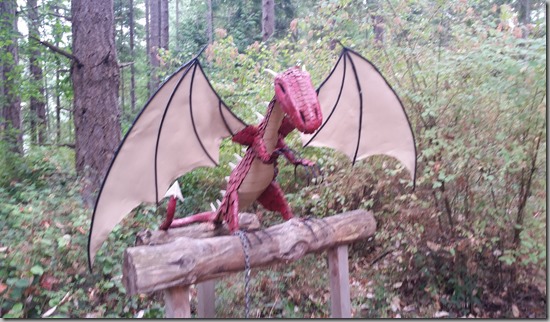 We then went to Roche Port. Another nice little port with a cool history. It was the site of a large lime kiln. 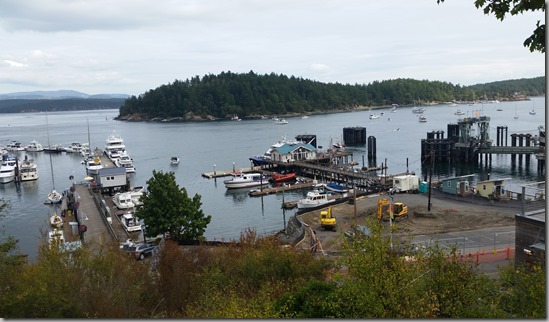 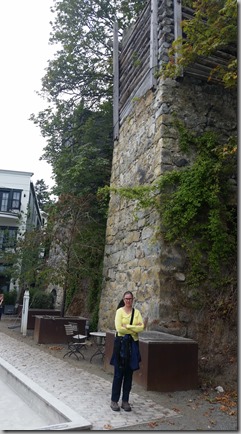 We then headed to American Camp. It is a National Historic Park. Not a bunch there, but the history is interesting. Then Captain George Pickett was the first commander of the fort. He later would resign his commission, join the confederate army and have a bad day at Gettysburg. He did graduate last in his class at West Point. 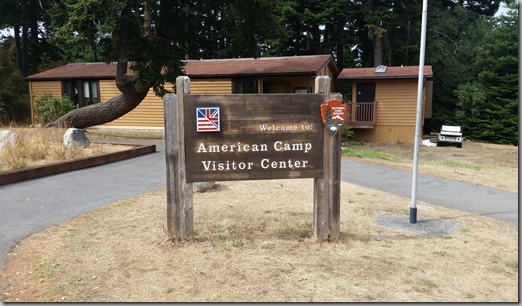 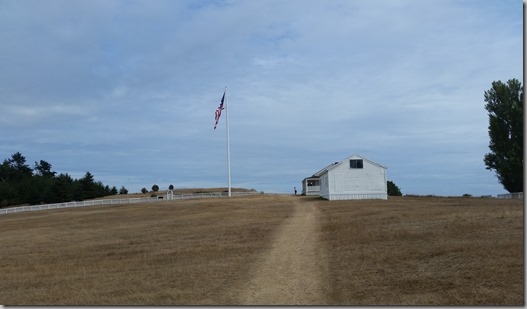 We then went to Whale watch park. We saw what some told us were whales, but they were too far away to get real excited. We had a nice time just sitting and watching seals and birds. We did get a good look at some porpoise. There is also a lighthouse there. Not as cool as the Oregon lighthouses, but still attractive. 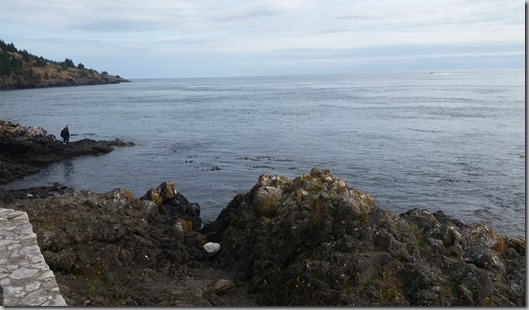 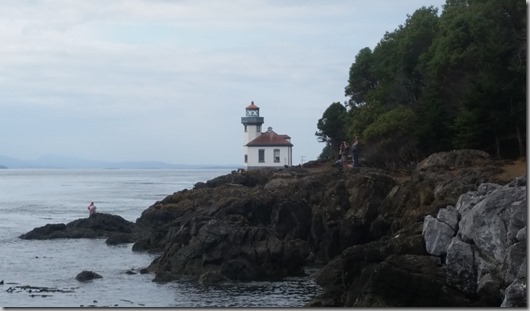 We got on the bus and made it back to catch our ferry. We had to board before we could find something to eat, so we were introduced to ferry food. Oh well, it was a fun day with lots of walking. The highlight of the day was the ferry rides. The San Juan Islands are just beautiful. I can see why some people just get a big boat and spend their retirement cruising around these islands. When we landed in Anacortes, we still had the 1.5 mile walk back to camp. Let’s just say we will be taking the truck and paying the $10 parking fee from then on. Overall it was still an awesome day.

Posted by ktmissouri at 5:34 PM