Oak Bay Park and Mark Comes for a Visit

After we came across the Puget Sound on August 20, we needed a place to camp. We have been liking County and City Parks. Oak Bay park is a county park in Port Hadlock, Washington. It turned out to be a fairly nice park, but most of the sites did not have electric. We got lucky and got the best site in the park. Site 19 had electric and a beautiful view of the bay below. 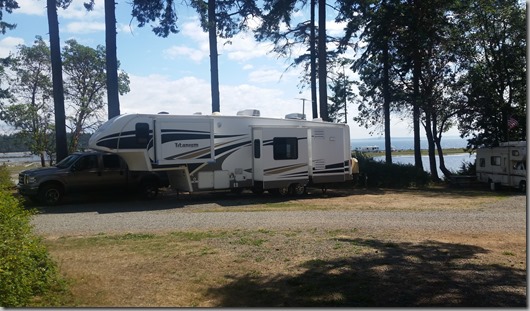 We had good Verizon 4G signal and even TV channels. No water hook up, but we could reach one with a hose to fill our tank. All that for $25 per night. The campground host is a really cool guy named Howard. He is a full timer from Colorado.

On the morning of the 21st, I took a walk around the campground and met a guy from Washington. He asked about our lifestyle. We had a nice talk. His name is Matt. He has recently left his corporate job and is now considering what he will do next. In the mean time he has been traveling for the past two months. Here is a shot of Matt: 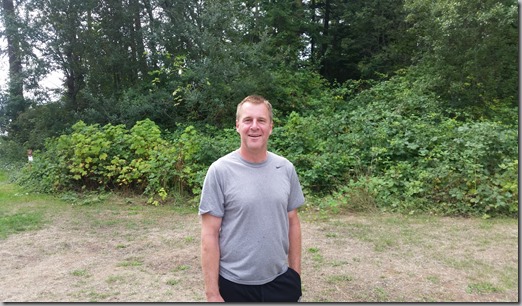 If you are reading this Matt, All the best and enjoy your freedom, even if it is just for a short time.

It is meetings like that that make me really appreciate the fact that I don’t have to deal with the corporate world anymore.

I continued my walk around the park. There is an upper and lower park. The lower park is out on a spit of land below the upper park. Here is the view we have from upper. 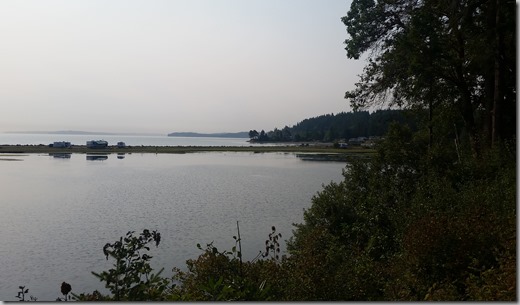 Here is the view from the lower looking back up. 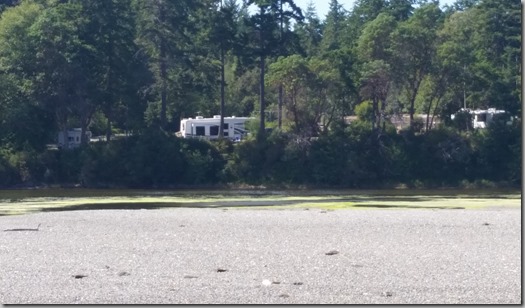 There are some tidal flats in between. We see ducks, seagulls and Herons. And then there are the geese. There are a large flock of them and when they decide to move the honking can be quite loud. This Heron hung around the trees above the trailer and fished in the tidal flats. I could watch him for hours. Saturday, August 22, was the day that Mark was going to join us. He lives in St. Louis and is just getting started with his career in the IT world. Kim had plans to meet up with a friend in the Edmond area, so I took her to the ferry landing in Kingston. She went over to see Belinda. They had a fun day.

I drove on to Bainbridge Island and caught the ferry there to Seattle. We love ferries. I call it the civilized way to travel. As opposed to airlines that treat their passengers like cattle.

Here  are a few shots on the ride into Seattle: 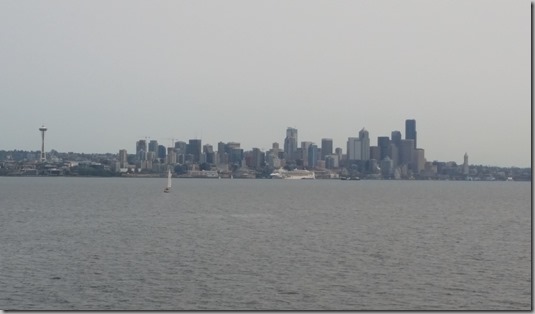 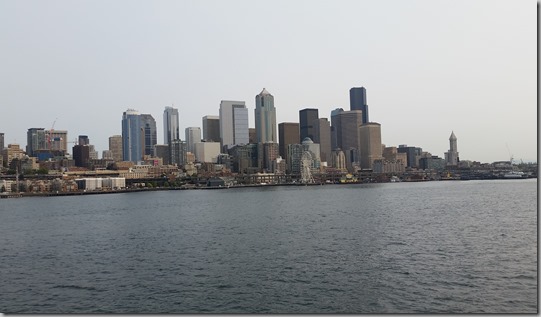 When I arrived, I stopped at Ivar’s for some clam chowder and fish and chips. 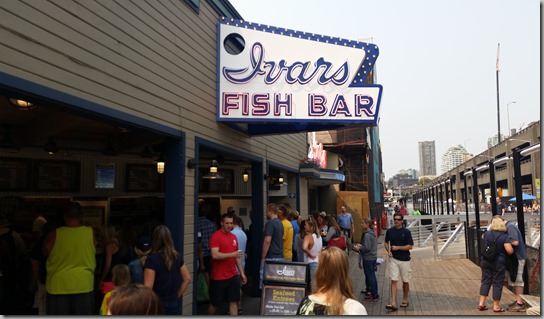 It was very good and right at the ferry landing. The same place it has been since 1935. I then started walking around the city. I love the waterfront. They have a large Ferris Wheel. I can’t believe my mother rode this a few weeks ago. you go MOM! 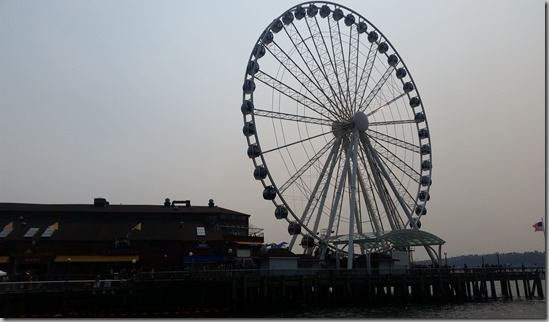 I sat and watched them dock a large container ship. I just like to watch stuff like that. 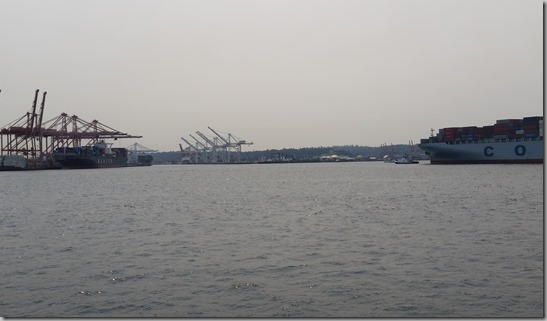 There is a marina that has some awesome old yachts in it. You can also see a cruise ship in this shot. 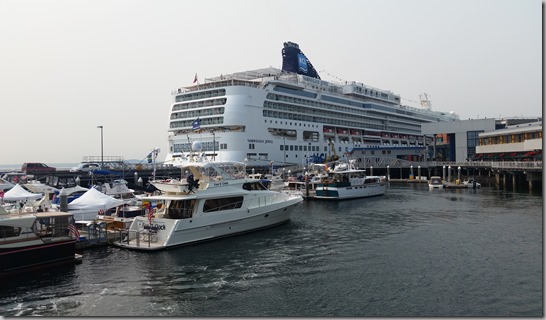 I walked and walked. I went to the Pike Place Fish market. There is a flying fish in the second shot. 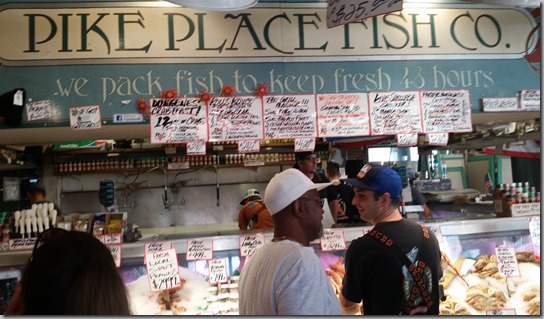 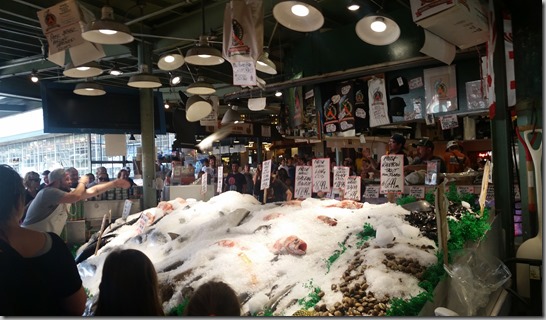 It was then time to go meet Mark. He landed at Sea-Tac and then took the light rail to the downtown area. The transit station was underground and very nice. 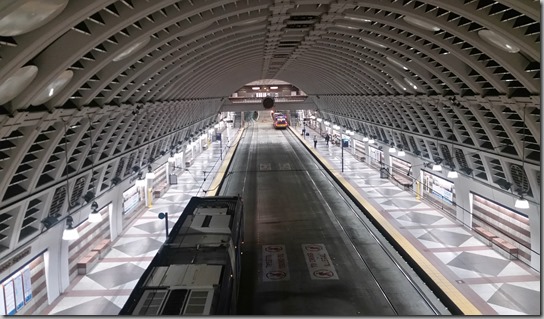 It was awesome to see Mark. We miss our kids, but I think they understand why we are doing what we are doing. I didn’t take a picture of him at this point, but there will be plenty in later posts. We walked around for a bit and then took the ferry back over to Bainbridge. We then drove to Kingston to meet up with Kim. We stopped at a small restaurant and sat out on the deck and had a nice dinner.

Now the adventure with Mark begins. We did not go as fast as we did with his sister back in July, but we still did a number of things. Come back to see picture of Olympic National Park and some other really cool places. I will close with this nice shot of the sunrise over the bay out the side of our rig. Those noisy geese got in this picture. 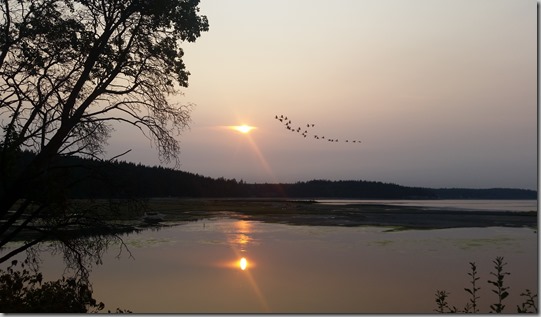