Back to South Bay and Surprise Visitors

We are still in Northern Louisiana. We are heading north tomorrow. We hope old man winter is done for the year, but we will see.

This entry goes back four weeks ago. We left Everglades NP on January 27. We decided to go back to the park that we had used as a jumping off point to head down to the Everglades. So, we backtracked the same route to South Bay RV park. We went right back into the routine that we had established during our previous visit. Daily 3+ mile walks along the levy and Kim joining the other ladies in the park in walking and then doing yoga. We planned to stay a week and enjoy some down time after the previous few weeks of being busy. It did not turn out that way.

That all changed on the first night we were there, when we made contact with some friends from Arkansas. We had seen Dick and Cathy at the beginning of this trip when we were in Russellville. They told us then, they were going to come to Florida, but had no schedule. They decided to see if they could get into our park. They were scheduled to arrive on Thursday of that week. When they pulled in they parked in a spot directly across from us. We always have an awesome time with these folks, so we got right to it.

The first morning they were there the girls were doing yoga, when I had a knock at the door. I was in the shower, so I threw on some shorts and much to my surprise a police officer was at the door and told me that the RV next to us was on fire and I needed to get out of my rig. I quickly got dressed and watched as the firemen were doing their job. The rig was lost, but thankfully no one was injured. We got some smoke in our rig, but not bad. Kim spent some time over the next day helping them get packed up to head home. 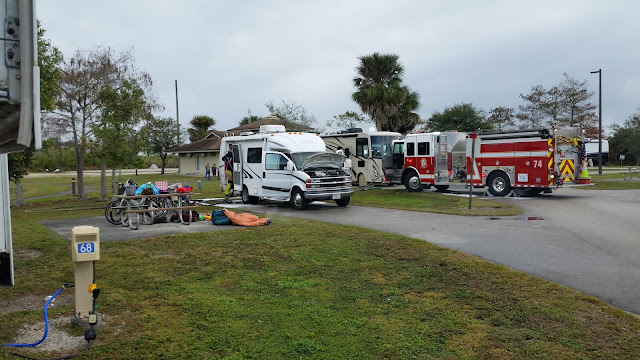 Dick, Cathy, Kim and I went on a driving tour of the area. We checked out a couple of other RV parks in the area, none were as nice as the one we are at. Then we went to dinner at a very authentic local Mexican restaurant. The food was very good, but they had a drink on the menu I decided to try. It was a mixture of beer and tomato juice. It was terrible! The server told me it was a hangover cure, I guess that was the problem, I did not have a hangover. Next door was a Mexican grocery. It was very cool to see all they had. We did buy a few items to try out later. That evening Kim made a Key Lime pie that was amazing. The only problem was that I had to share it.

On Saturday, we decided to take a long driving trip back down to a different section of Everglades NP, called Shark Valley. It is just made up of a visitor center and a long paved road out into the park. You can ride bikes, take a tram or just walk. We decided to just walk. We saw a bunch of wildlife.

Shark Valley is certainly an interesting place and worth it if you are in the area. We then decided to go over to Big Cypress National Preserve. They have two visitor centers right along highway 41. The preserve is a combined effort of the National Park Service, local hunting and recreation groups all working together to preserve and enjoy this amazing place. It is a very swampy area with lots of amazing wildlife and plants. We enjoyed the exhibits and an excellent movie in the VC and then took a short walk on a boardwalk where we saw more alligators than I have ever seen. 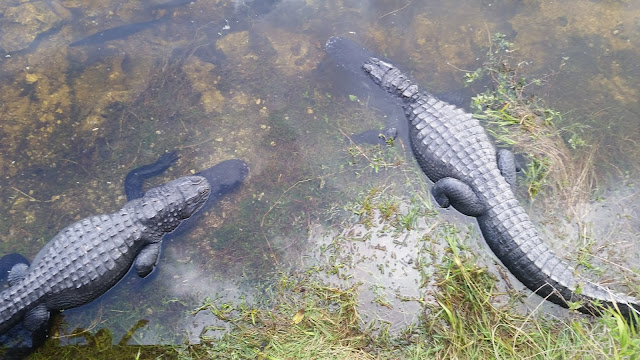 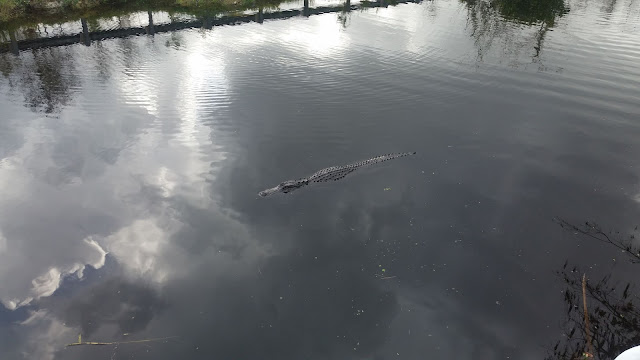 As we continued our drive through the preserve, we saw hundreds of alligators. They were literally every 100 yards and some of them were huge. It was a long drive, but a fun day with some great friends.

The next day was our day to head north, so we took some pictures to remember our time together.

We were heading north to meet up with another couple that we have also met since we have been on the road. Travel to new places is great, but it is the people we meet along the way, that make this lifestyle truly amazing. I will write about that meet up in my next entry.

Posted by ktmissouri at 6:01 PM