I am writing this entry from central Mississippi. We are continuing our slow move to the west. We have found many great campgrounds that are fairly empty. We are back in cooler weather, but we do need to use our entire wardrobe. At least that is what I am telling myself. For now, though, I will write about a few weeks ago.

When we left Missouri, back in November, we had talked to two of our partners in the ranch about getting together in South Florida this winter. Bob and Linda were going to fly down and spend a week in the Miami area. Doyle has been coming to South Florida for much of his life. His father purchased Coopertown, the oldest Air Boat operation in the Everglades, many years ago. He spends a couple of weeks managing the operation each month to help his father as he gets a bit older. He owns a condo over in Miami's North Beach. Bob and Linda were planning to stay at the condo while they were in town.

Bob and Linda arrived late in the day on January 22. Doyle was already in town along with his wife Dawn. We planned to meet at Coopertown on January 23 and get a personal tour with Doyle and Dawn. We were very excited to see the Everglades from Doyle's perspective.

Doyle can drive one of these airboats like a sports car. We went for a fun ride and then he stopped and started educating us about his love of the Everglades. There has been significant changes in the plan by the National Park Service in the past few years. One major change is that they bought the Coopertown operation and leased it back to Doyle's father for 10 years. Doyle knows that most visitors want to see Alligators and he showed us plenty of the them.


Doyle did not limit our tour to the regular trail. One of the things that he is very proud of is the many movies and TV shows that have been shot at Coopertown. They include Africa Queen with Humphrey Bogart, Miami Vice, Flipper and Gentile Ben. He showed us what was left of each of the movie sets and much of the history of the area.

The Everglades are an amazing ecosystem. Doyle showed us how to survive if we were ever stranded out there and told us some amazing stories about the area including two major Airline crashes. Hurricanes have significant impact on the area, but the area has natural ways of adapting and surviving.

We had an amazing day. I can't thank Doyle enough for the personal tour.

The next day we decided to drive down into the Florida Keys. We had no intention of making it all the way down to Key West. None of us had ever made the drive, so we just wanted to see what was along the way.

We were a bit surprised to see the amount of civilization along the route. I had envisioned small keys and mostly bridges, but instead we went for long stretches on land with no view of the water. When we finally saw the beautiful blue water, we stopped to get a better look.

We stopped at Robbie's for lunch. Decent food great view. 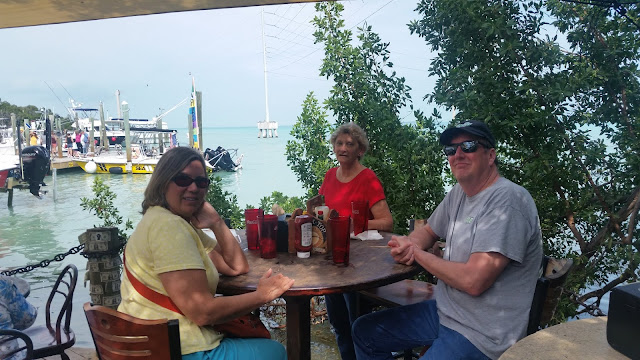 It was after lunch that we decided to drive on down to Key West. We clearly did not get the whole experience, but we decided to make a walk around and down to the southernmost point and take the picture. 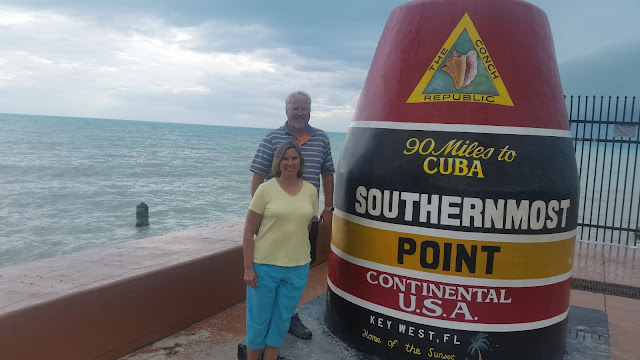 That was a recap of our first two days together. They were both full days, but we had two more memorable days to come. I will write about those in my next entry.
Posted by ktmissouri at 1:44 PM