I am writing this on February 28th from South Central Arkansas. We have a great campsite on Lake Ouachita. We are expecting some freezing temperatures over the next few days, so we will stay put for a bit and let that pass before continuing our move north. This entry is from a time about 4 weeks ago.

We left South Bay RV park on Sunday, February 3. We headed up the eastern side of Lake Okeechobee, and then over to Interstate 95. We exited on highway A1A over to Port Canaveral. This is a major cruise ship port, so the roads are excellent and well developed. The total drive was about 165 miles.

We have been to Jetty park before, but never stayed here. We have some great friends, Bill and Lisa, that like to come down to Jetty park each winter and spend three months. This park is tough to get in to, so I was surprised when I checked on line and found one site available for 2 nights. I immediately booked it.  Then I sent a note to Bill and Lisa and told them we were going to make a stop. They claimed excitement.

We had a decent site and we got set up without unhooking. We had plenty to do right here in the park for the 2 days we would be there.

We had a site back in the fenced in area of the park, but Bill and Lisa like it out here along the canal. They do not have electric, but they do have water. They camp in a class B Roadtrek. We had water and electric and payed about $45 per night.

We arrived on Super Bowl Sunday and they were having a pot luck at one of the shelters. We joined Bill and Lisa there and spent some time catching up. We then went over to watch the cruise boats go out and I was also watching a few sailboats coming in from a day of sailing.

The security for the ships is impressive. We saw Sheriff boats and this Coast guard boat with a manned machine gun on the bow. 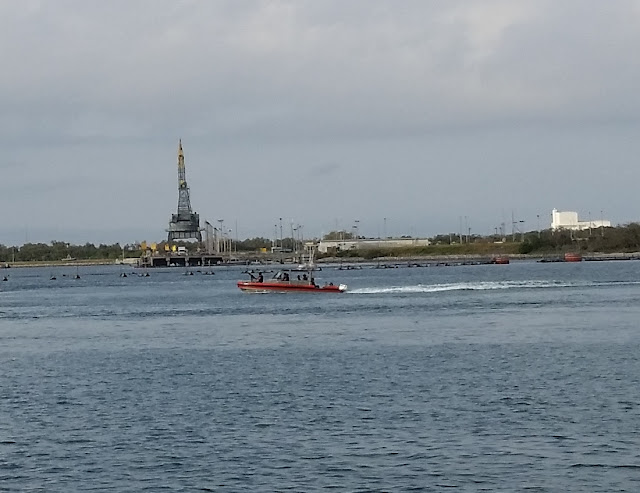 The Oasis of the Seas is huge. It even has an atrium with some internal balcony cabins.

We then went to our rig and watched the Super Bowl. Fun times with great friends.

The next morning, Bill and I went for a long walk. We went out to the fishing pier to check how the fishing was, and then down the beach to see how the surf fishing was going. . You can fish on this pier without a license if you are staying in the park. I did not fish while we were there and as a matter of fact have not fished at all on this trip. Something wrong with that!

Later in the day it warmed up and we decided to spend some time on the beach.

We were able to watch a number of ships come in and out of the port. There is a submarine base right across the channel from the park, but there was no submarine activity while we were there. This is also where they bring the rocket boosters after they were recovered after a launch from Cape Kennedy. We really enjoyed the activity and see why people come here year after year.

That evening we were able to see one of the beautiful blue Disney ships head out. 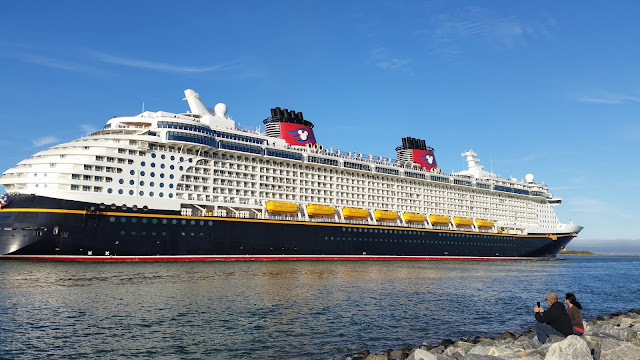 After the channel had cleared, three tugs brought in this huge tanker. Bill has an app on his phone that allows him to listen to the radio traffic. It is pretty cool to hear what they are talking about and know what is about to happen. 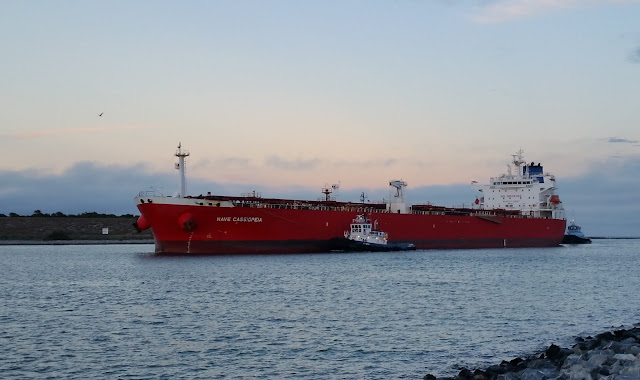 We finished off the evening with a campfire with a bunch of folks from the campground. We had hot dogs and then smores. It was a great visit, but too short. We had to move on the next morning. The only problem was that we did not have reservations. That turned out to be an interesting day. I will write about it in my next entry.
Posted by ktmissouri at 11:18 AM