I am writing this entry from SE Georgia. We have moved fairly quickly in the past week. We drove about 600 miles to get out of the congestion in Florida during the "Snow Bird" season. We really had a great time and we enjoyed the warm temperatures, but we were ready to get back to empty campgrounds and peace and quiet. We found those things here. But, for now we will go back to our final move south on this trip...

We left South Bay Campground on Sunday, January 13. We drove about 150 miles south. As we headed down Highway 27, it was a beautiful sunny day. We saw hundreds of motorcycles, maybe even thousands. There was a local restaurant that was packed with bikes. I wondered what the bikers did around here with flat ground and straight roads. A few minutes later, I got my answer. 4 bikes passed me at I believe was close to 150 MPH. It was terrifying. I love to ride bikes and think it would be fun to ride one that fast on a closed course, but on a public highway is crazy. Then it happened again, and then again. These riders were not showing any skills, just the ability to twist the throttle and hold it.

A bit later we came upon an accident. We were stopped there for about an hour while a life flight helicopter came in to pick up a rider that had gone down on a 90 degree turn from one road to another. I hope they are OK, but just wow!

The GPS took us out into the farm lands and commercial nurseries to avoid the traffic around Miami. The roads were fairly rough, but at least we were making good progress with no traffic. We finally saw the entrance sign to Everglades NP. 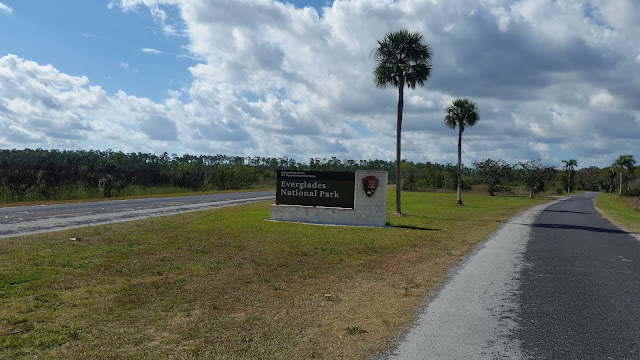 This makes 40 National Parks we have been to in the past 5 years. They are all special places. We were excited to see what this one had to offer. We were there during the government shut down. There were no rangers on duty, but plenty of volunteers and the park was open for exploring. We did not have to pay an entrance fee.

Flamingo Campground is very large. There are a few sites that have electric, but those are hard to get. We decided we would be fine with a no hookup site and we would just use solar for the week. As it turned out, we did not have to get the generator out of the storage cabinet. The sun was out all week and we did fine with just solar. There are few trees and that helps. We did not have Verizon cell signal, but we understand that AT&T does work. We also had no OTA TV. That was all fine with us. We decided to spend the week reading, paddling and bird and other wildlife watching.

The tent camping area of the park is right along the edge of the open water of Florida Bay. This is an area of thousands of islands called keys. It is very shallow in spots, but you can sail to anywhere from this harbor. It did not take long to notice that the mosquitoes and "no-see-ums". They were not terrible while we were there, but you had to take precautions. We heard from the volunteers that they can be unbearable at times.

The first morning, I tried to take a walk, but was getting chewed on, so I returned for my bike and that made all of the difference in the world. It seems that about 10 MPH was fast enough to keep the bugs off of me. Kim joined me for a ride over to the marina and visitor center. This area was wrecked during Hurricane Irma in 2016, but all is back up and running other than the Old Visitor center. It looks like that will be a while. We saw Manatee and a rare American Crocodile in the harbor. 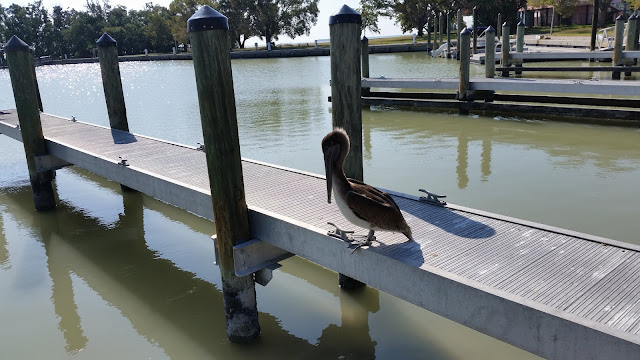 I took hundreds of pictures of birds and other wildlife. One afternoon I took a walk with my big camera and found a pair of Osprey guarding their nest with chicks inside. This is one of my favorite series I have ever shot. I really like raptors. 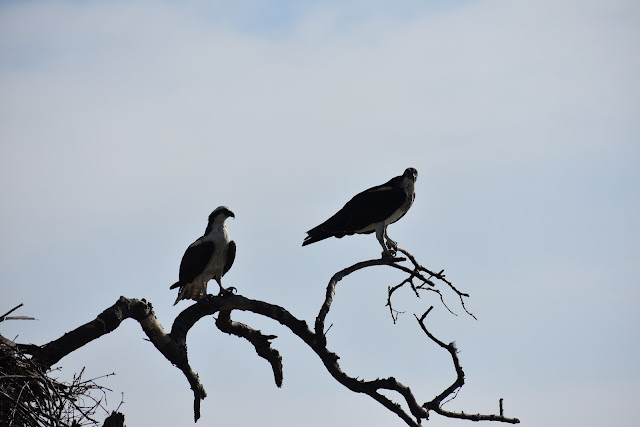 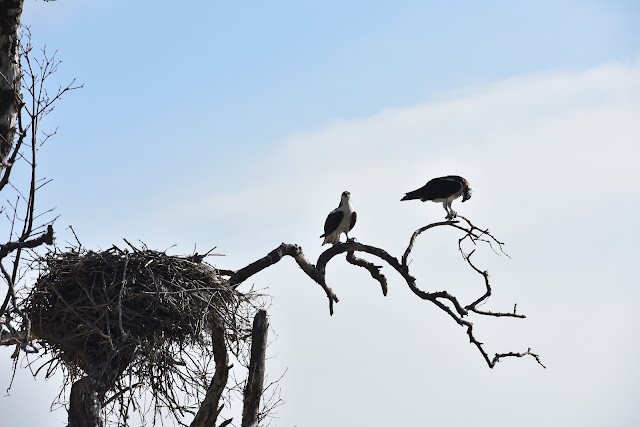 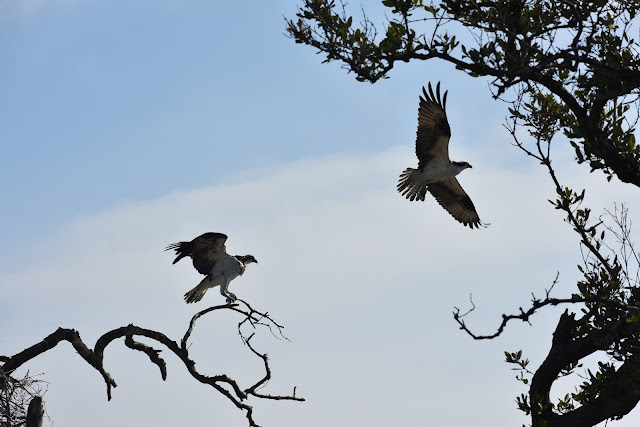 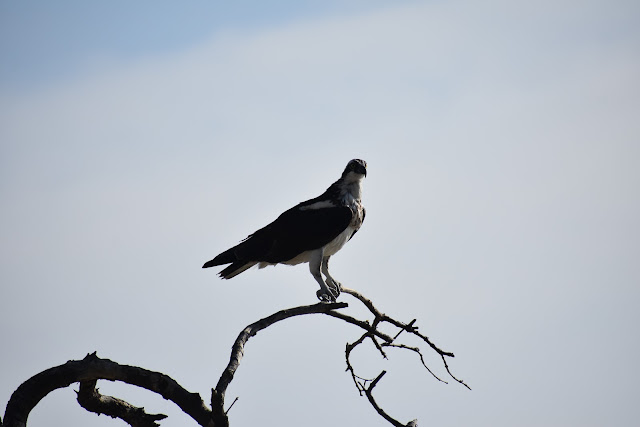 We decided to take a paddling trip through a mangrove river. The trip was on a paddling trail trail about 10 miles inland called 9 mile pond. The good news is there were no bugs inland. The scenery was beautiful, but we saw very little wildlife except fish in the clear water.

It was a fun trip, but at one point we got caught up in moss that made the going very difficult. We soon got out of it and found some nice lakes with wild life. 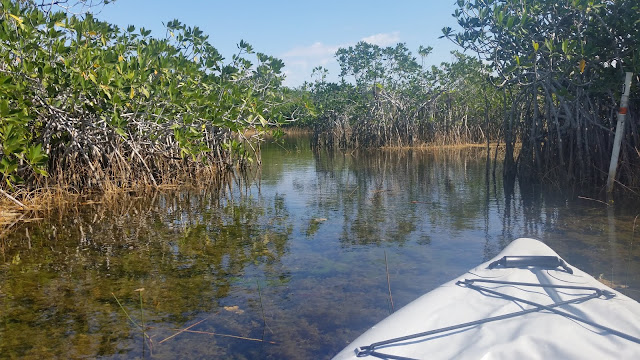 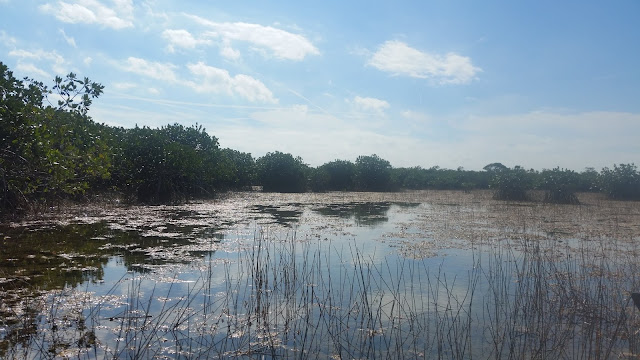 We paddled for about 4 hours without seeing another person. When we got to the lakes at the end there were a few more boats.
We were just cruising along the edge of the pond watching a bird, when this large gator splashed into the water in front of us. It took us a second to gather composure and take a few pictures. 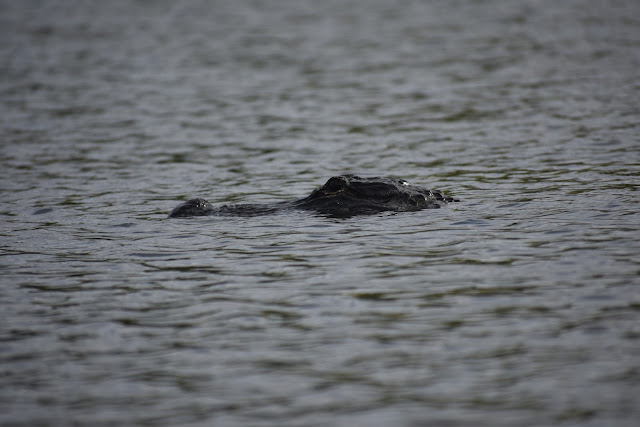 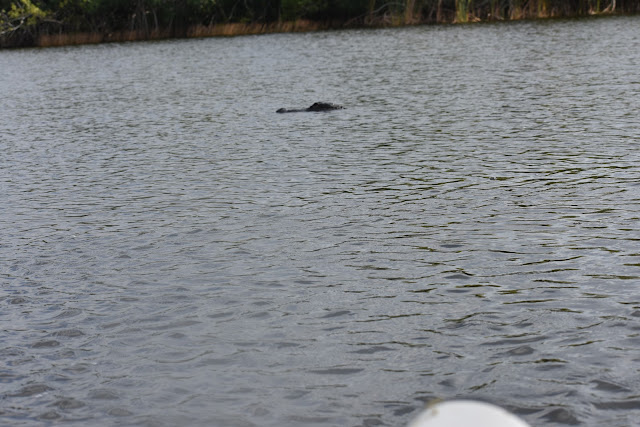 OK Mom, these are for you: 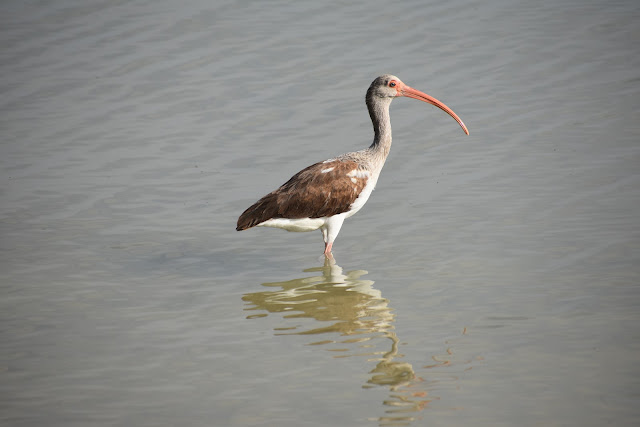 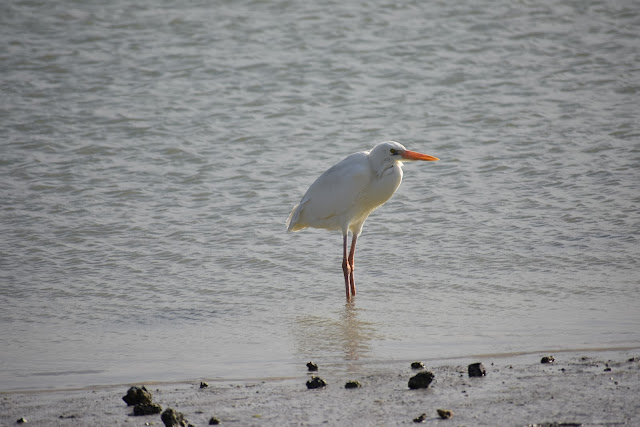 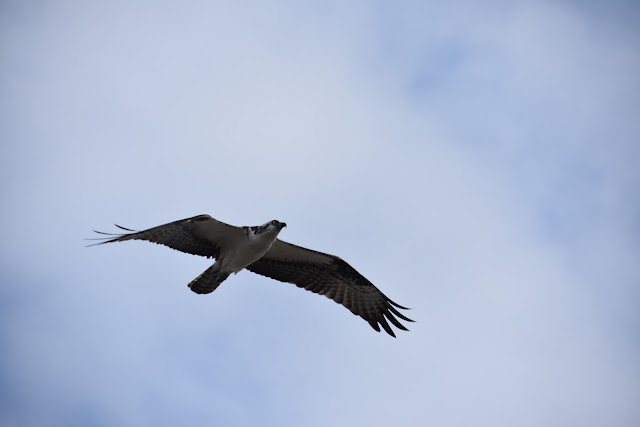 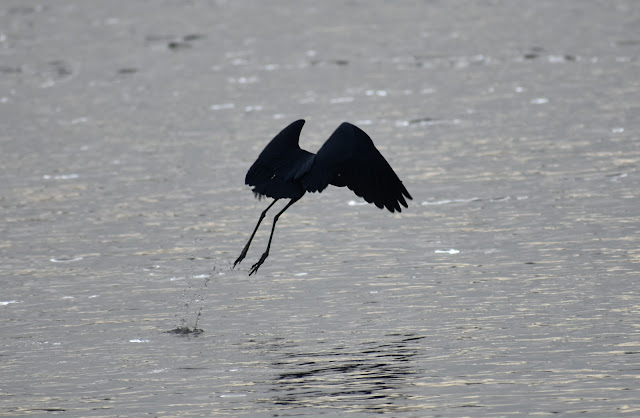 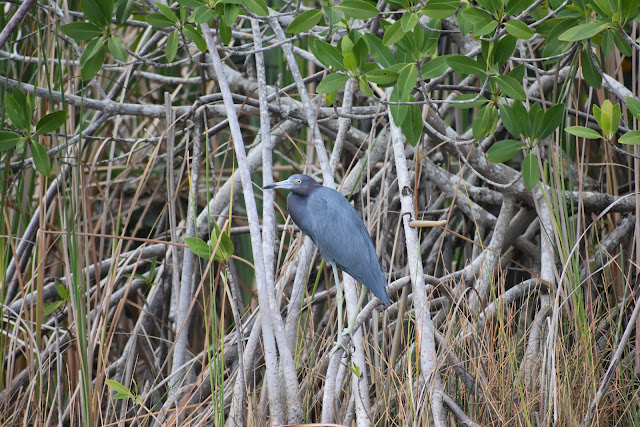 We spent a very enjoyable week at Flamingo. I finished a book that I have been trying to read for a few months. It is a very technical book about sailing and sailboats. I am sure Kim read about 10 books and we both just relaxed. I would love to return one day, but this next time will be by water.

Up next is our second week at Everglades. We moved about 35 miles north to Long Pine Key Campground. It was a very different week. I don't think we spent one day in the campground. We were on the go every day we were there. I will tell that story in my next entry.
Posted by ktmissouri at 11:42 AM