An Easy Walk through Capitol Wash

After the long drive on the 16th, we did as little as possible on the 17th. I don’t think I took a single picture except this one of the campground with snow. 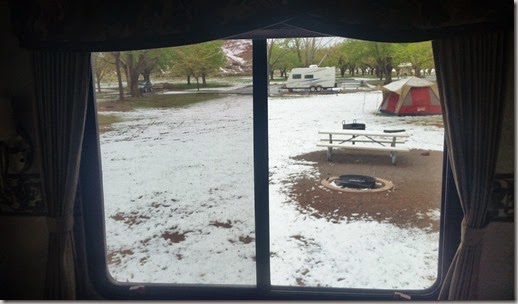 We watched it melt all day and we stayed inside and read and thanked God we were not in a tent.

When we got going on Saturday the 18th of April, we were ready to get back outside. It was a beautiful sunny day.

Kim was not up for a strenuous hike, so we looked for a easy walk that would be through this beautiful area of Capitol Reef. We decided to take a walk through Capitol Wash to what they call “the Tanks”. 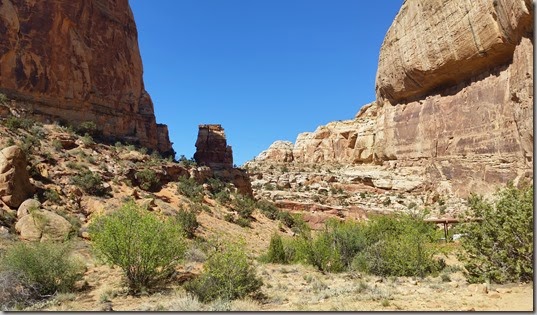 The walk was flat and easy. We just strolled along. There were some petroglyphs and then what they call the pioneer registry. This is some names inscribed on the canyon walls that were done by the early Mormon settlers. 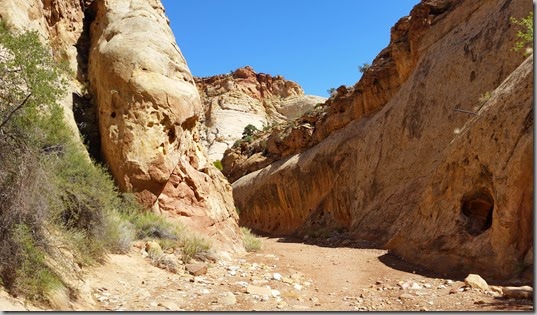 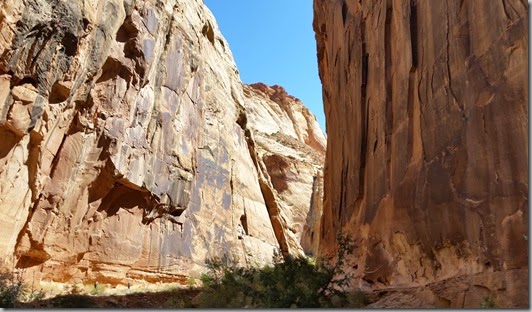 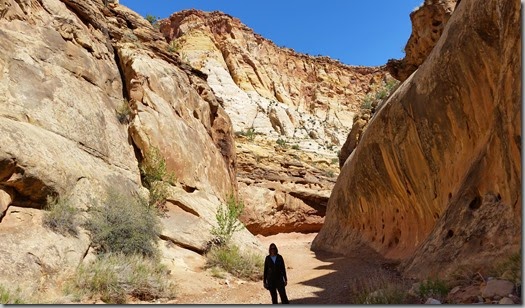 The scenery was once again just stunning. We were really enjoying the walk. Here is part of the registry high up on a wall; 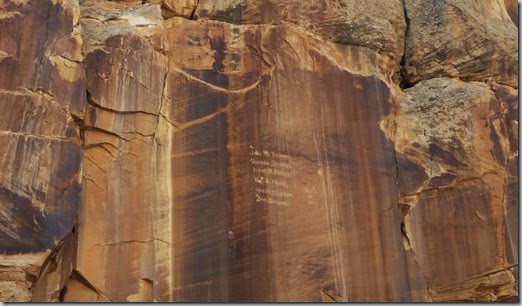 We walked on to a point that the trail turned up the side of the canyon to a place called “the tanks”. These are natural water holding tanks carved out of the rock that the early settlers used to water their livestock. I was not sure if Kim would want to go up, but she was ready to go. It was very steep, and we had to do some scrambling over the rocks, but the view was worth it. 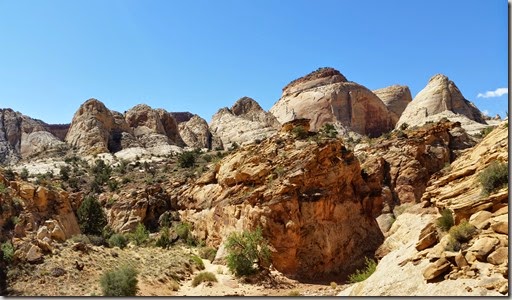 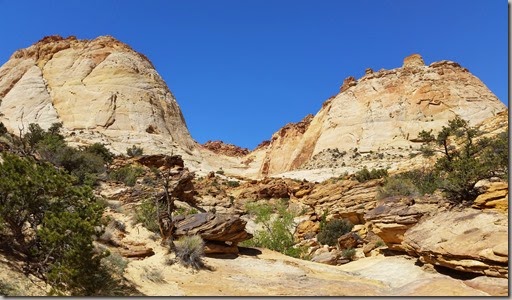 The tanks were cool, but the natural bridge stole the show. 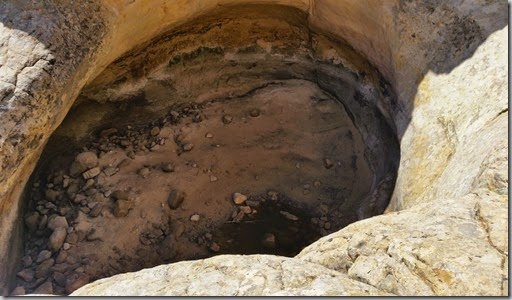 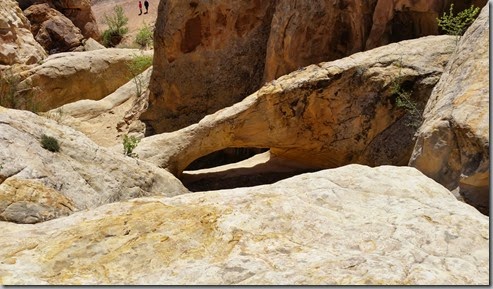 We climbed back down and finished the walk back out to the parking area. Here is a Panoramic shot from on top.

We then went over to Grand Wash and checked that area out. Kim was not up for more hiking, so we just toured from the truck. We did stop and listen to the best echo I have heard in a while. 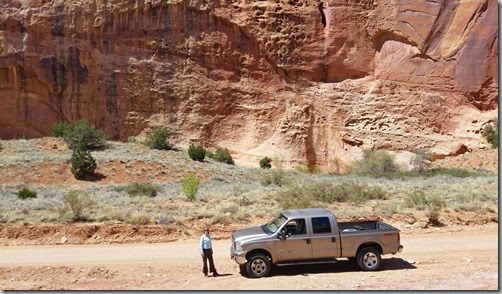 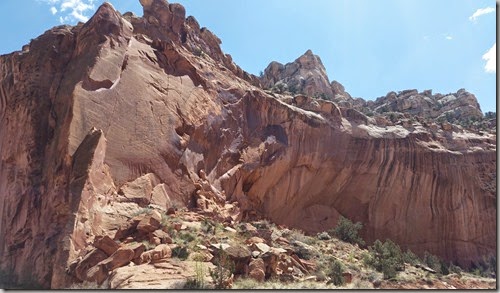 I just kept taking pictures of this awesome place. I won’t bore you with too many more of them.

We got back to the campground and decided to take a long drive on Sunday. Our only option for church was in Torrey at 5PM. It was a very cool little church. The priest has to drive 100+ miles to say mass. We were two of 9 at the service. Good thing that there were not more, I think the capacity was 30. They had a little social afterwards and we got to meet everyone. 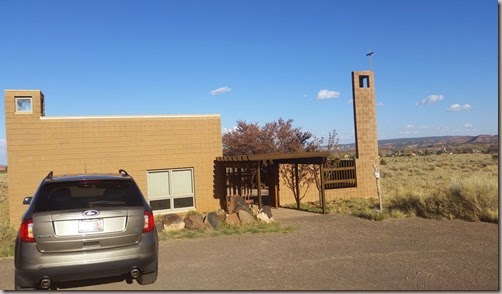 The views out the window of the church were awesome. 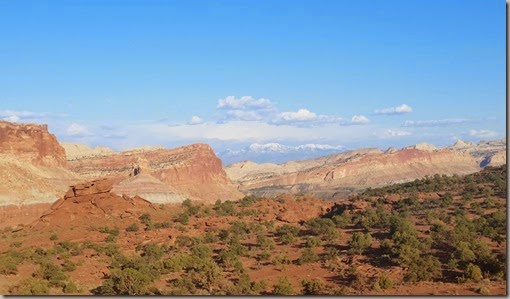 One thing I have not mentioned is that at the Fruita campground, they have a small store that sells among other things, homemade fruit pies and cinnamon rolls. We have sampled them and can attest to the fact that the taste is excellent. Here is a cherry pie that I purchased for consumption on this evening: 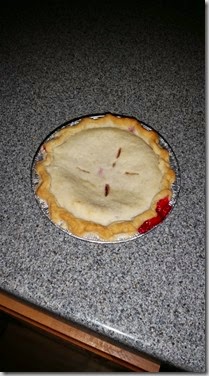 Through some experimentation, we have determined that if you warm the pie put two scoops of vanilla ice cream on it and then set it between the two of us armed with spoon and fork we can consume it in about 5 minutes. WOW, they are good.

We would need the energy provided by this dessert to get through the next day. Sunday was another excellent adventure. I will not call it “epic”, so as not to overuse the term, but it was very close. I think I have two more entries to finish up Capitol Reef NP. Come back for more pictures of rocks and a few other interesting things.

Posted by ktmissouri at 9:08 AM