Dark Angel Trail–Arches NP and a Side Trip

When we visited Arches NP earlier in the week, we knew that we wanted to do more in this awesome park. Kim and I talked about a big adventure that would really help us remember this incredible place. I was a bit surprised when Kim started talking about doing the Dark Angel trail. The park maps showed this at a 7.2 mile trail. I felt that would be a stretch for us, but Kim was convinced that if we took it slow, we would be fine.

On Sunday, April 12, we got up early for us and packed a lunch, and headed to Arches. The trailhead is in the very back of the park by the campground. We got on the trail at about 11:00 AM, a little later than I had hoped. The trail started out easily enough and we took the first side trail to Tunnel arch and Pine Tree arch. The moon was out and that combined with Tunnel arch, gave us this incredible view: 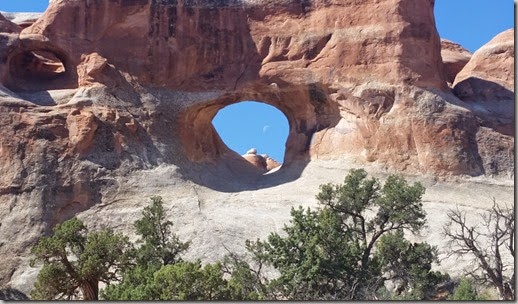 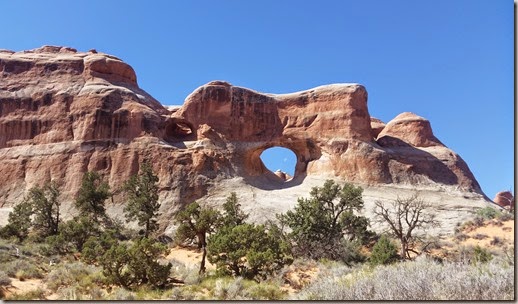 That was cool. Here is Pine Tree Arch: 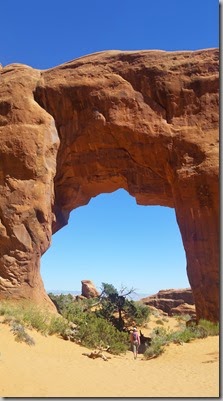 The arches are the star of the show, but the rock formations are equally impressive. 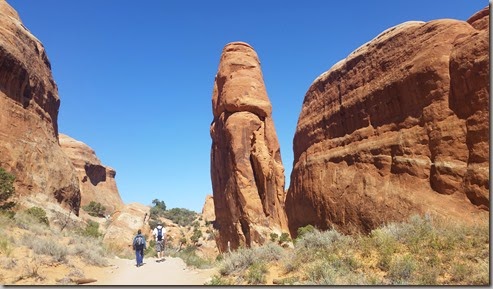 This area is dominated by huge “fins” that are stacked in formation. They are separated by just a few inches in some cases. We then walked on to Landscape arch. It is one of the most recognizable arches in the park. It did not disappoint. 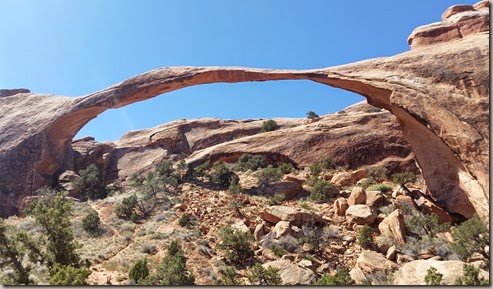 This formation looks like the bow of a ship: 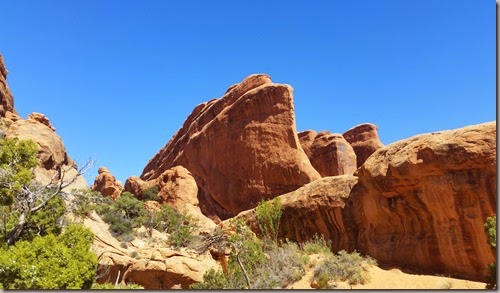 The trail up to that point had been fairly easy except for some big hills, but we were making good time. I was thinking we would be done by 2. THEN, it got interesting. I thought we had taken a wrong turn when we were faced with a rock spine that was very steep and dropped off about 30 feet on either side. There were a number of other folks there asking the same thing. Someone came down the trail and said Yep, this is it and this is only the beginning. The pictures just don’t do this justice. 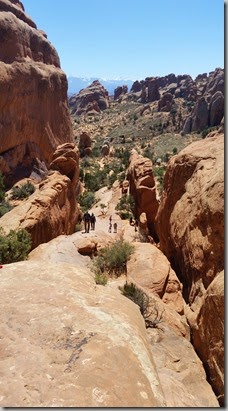 That was a bit scary, but later in the day that would have been no big deal. Here are some younger folks walking out on a fin: 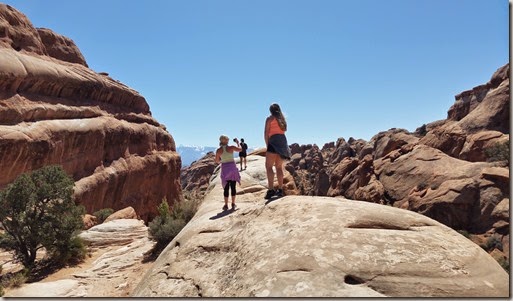 The going was much slower and we just took our time. This was not hiking, this was more like bouldering on a marked trail. It was fun, but exhausting. Next up was Partition arch. Kim posed for a picture. 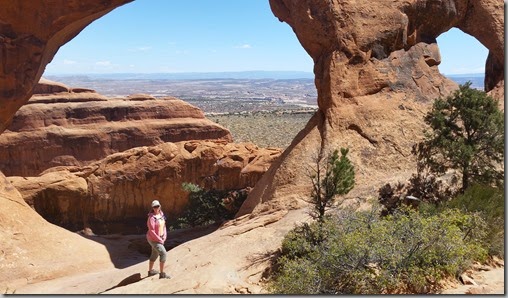 Kim had to climb up to look through the window. 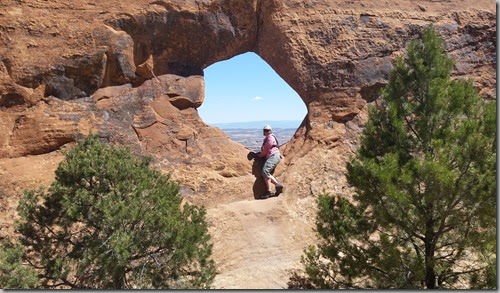 Then we made the extra side walk to Navajo arch. I found out later this was not part of the 7.2 miles. That added about a half mile. 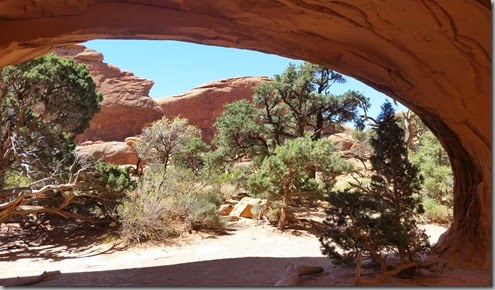 We stopped and rested a bit. We felt good, but were getting a bit tired. Little did I know what was left to come.

We then headed to Dark Angel. The trail got pretty crazy. There was more and more spines. This was very high and not as wide as it looks in this picture: 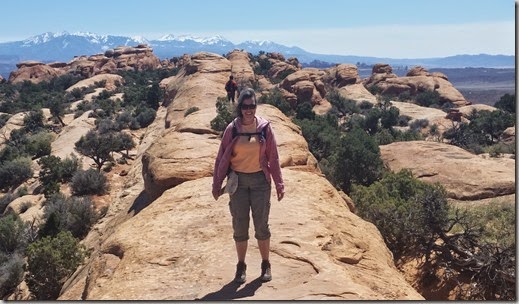 The scenery was amazing, but it was hard to look because of the steep drop-offs. 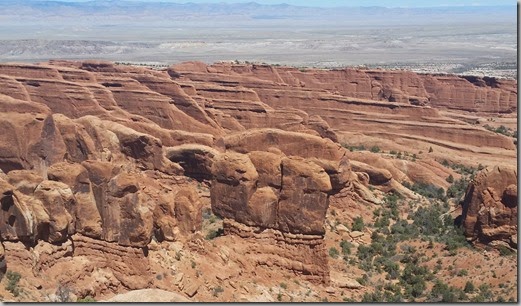 This is another part of the trail?: 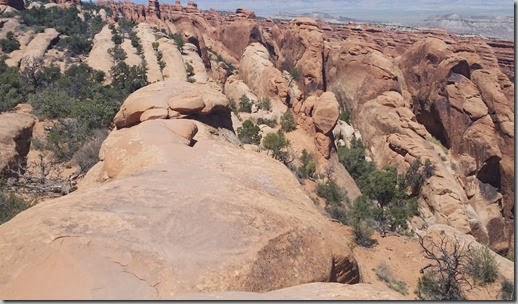 Next up was Double O arch. It was very impressive and my GPS told me we were at about 4.5 miles. Way over half way I thought. 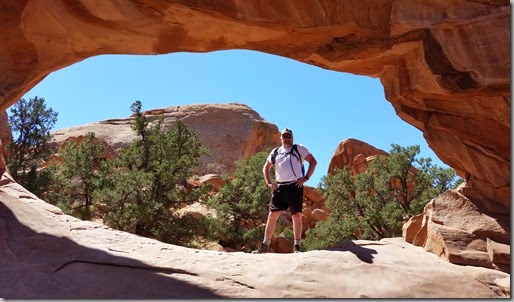 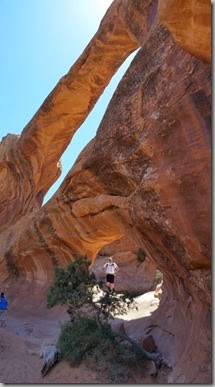 That was a cool arch. We saw some kids walking around on top. That was crazy. 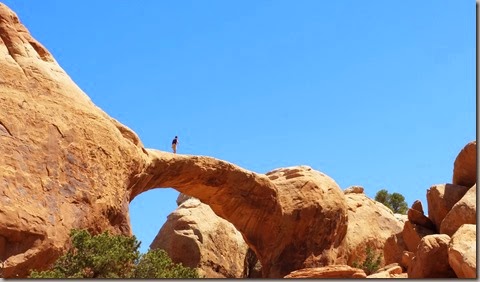 We looked out at Dark Angel and did not see anything too impressive except a big down and then up hill. Kim suggested we take pictures from here and skip it. I quickly agreed. The Angel is on the left: 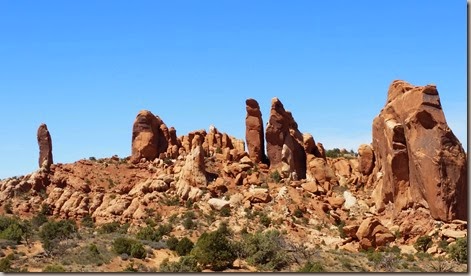 Then it was off on what they call the “primitive” trail to complete the loop. It was more bouldering up and down the sandstone “slickrock”. No mishaps, but it was wearing us out. 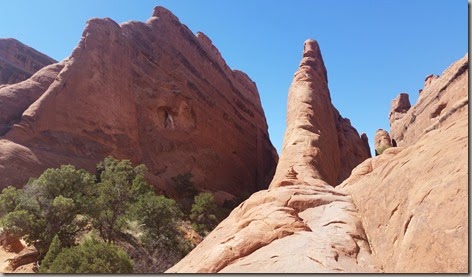 That is part of the trail. Not all the way to the top, but up to the cairn (stacked rocks) then down the side. It was beautiful, if you could catch your breath. We came to a sign for Private arch. It was on a trail that I also found out later was not part of the original 7.2 miles. That brings the total mileage up to 8.25. We walked back on that fairly easy and beautiful trail and we had the arch all to ourselves. I guess that is why they call it Private Arch. 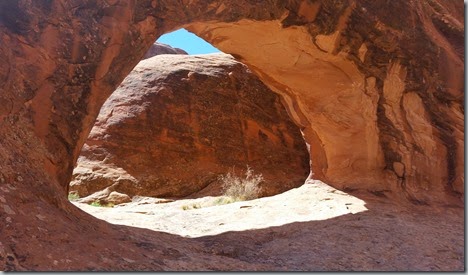 We decided to stop here and have lunch. It was a beautiful spot. Kim took her boots off and rested and ate as much as possible. 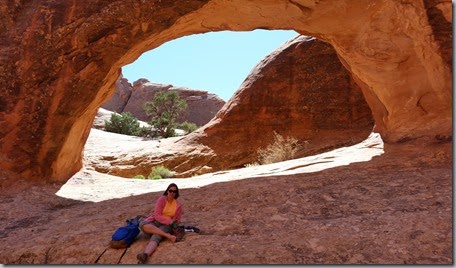 We did have some little friends that were very bold and looking for a handout. This is an Antelope Ground squirrel. 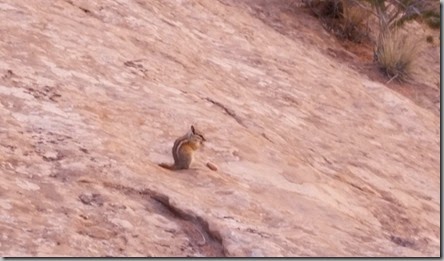 I looked at the map and determined that I had no idea how much longer it was. We were already way over the mileage it should have been at this point. I just told Kim that we were almost done. Boy, was I wrong.

The hiking/bouldering was both beautiful and exhausting. We just kept going. I could tell Kim was getting tired. She had a blister on her foot from the previous day. We had purchased some moleskin and that held up well, but she was now slowing down. I have to say here how impressed I was with her toughness. She never complained and just toughed it out. Way to go girl! 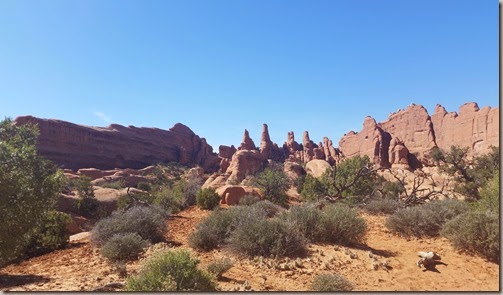 We walked on through the desert. It got sandy near the end and had some steep hills, but thankfully no more boulders to climb. When we got back to the main trail, I was relieved, but I knew then that the mileage was way off from the original. We walked for over an hour before we got back to the main trail without seeing anyone. Once on the main trail, we plodded along next to people that we just out for a short hike to Landscape arch. They looked fresh, we probably looked haggard. We made it back to the truck and could not wait to get our boots off and sit down.

I am going to have to implore the EPIC term for this hike. We will never forget Arches NP and this hike will be a big part of that memory. We know that if we push ourselves a bit we can find memories that will last the rest of our lives. This is the reason we are out on the road doing this. What a day.

I want to end this with a thought that has been running around in my head. Those that know me well, know that in 2002, I had a serious accident that left me walking with a cane for over a year. After having more surgeries and doing countless hours of rehab, I am very thankful that I am able to do this.

We did one more thing on the drive back to camp. The Colorado river comes down an impressive canyon and goes right by Moab. We had not been up that canyon, so we turned left up the canyon to see what it looked like.

All I can say is WOW again. This area is used for whitewater rafting and the water is not running too fast yet, but there were plenty of rafters on the water. The sheer walls are huge! 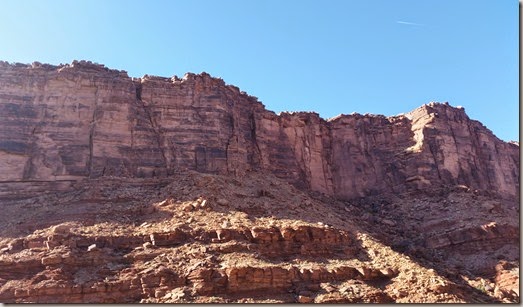 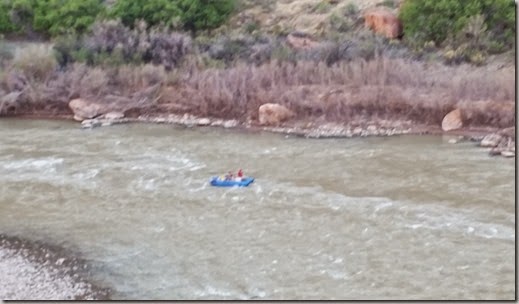 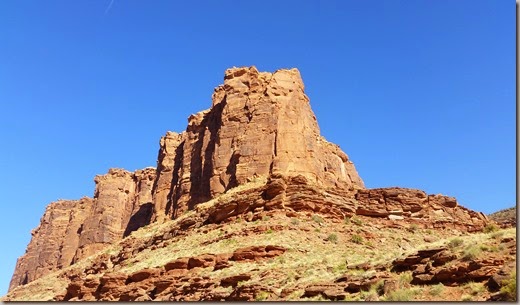 When we got up about 20 miles from Moab it kind of opened up and the scenes were something out of a movie. This is my favorite shot: 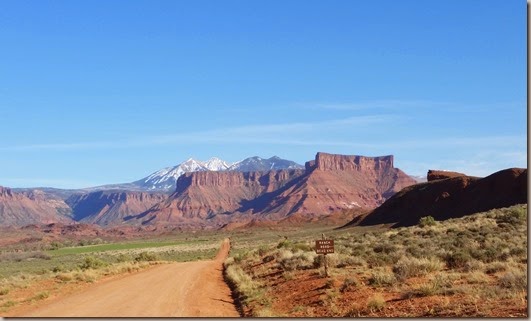 We LOVED Moab. I could spend much more time here, but it is time to move on. Next up is Capitol Reef NP. I wonder what that is all about? Stay tuned to find out what kind of trouble we can get ourselves in. And trust me, we do!