Moving on to Cortez, Colorado

On Thursday, April 2, we decided to move on to Cortez, Colorado. The trip was only about 120 miles, but it would get us in the area of Mesa Verde NP and the Canyon of the Ancients. The first problem was getting us un-shoehorned out of our beautiful campsite. Kim spotted me and we had no problem. We were up early for us and left the park after dumping at 8:30AM. This was the only day that had reasonable wind in the next few. The wind was going to get worse in the afternoon, so an early start was in order.

The first part of the drive was down the dam and down the San Juan River gorge. We never got tired of the awesome rock formations and the beautiful river. 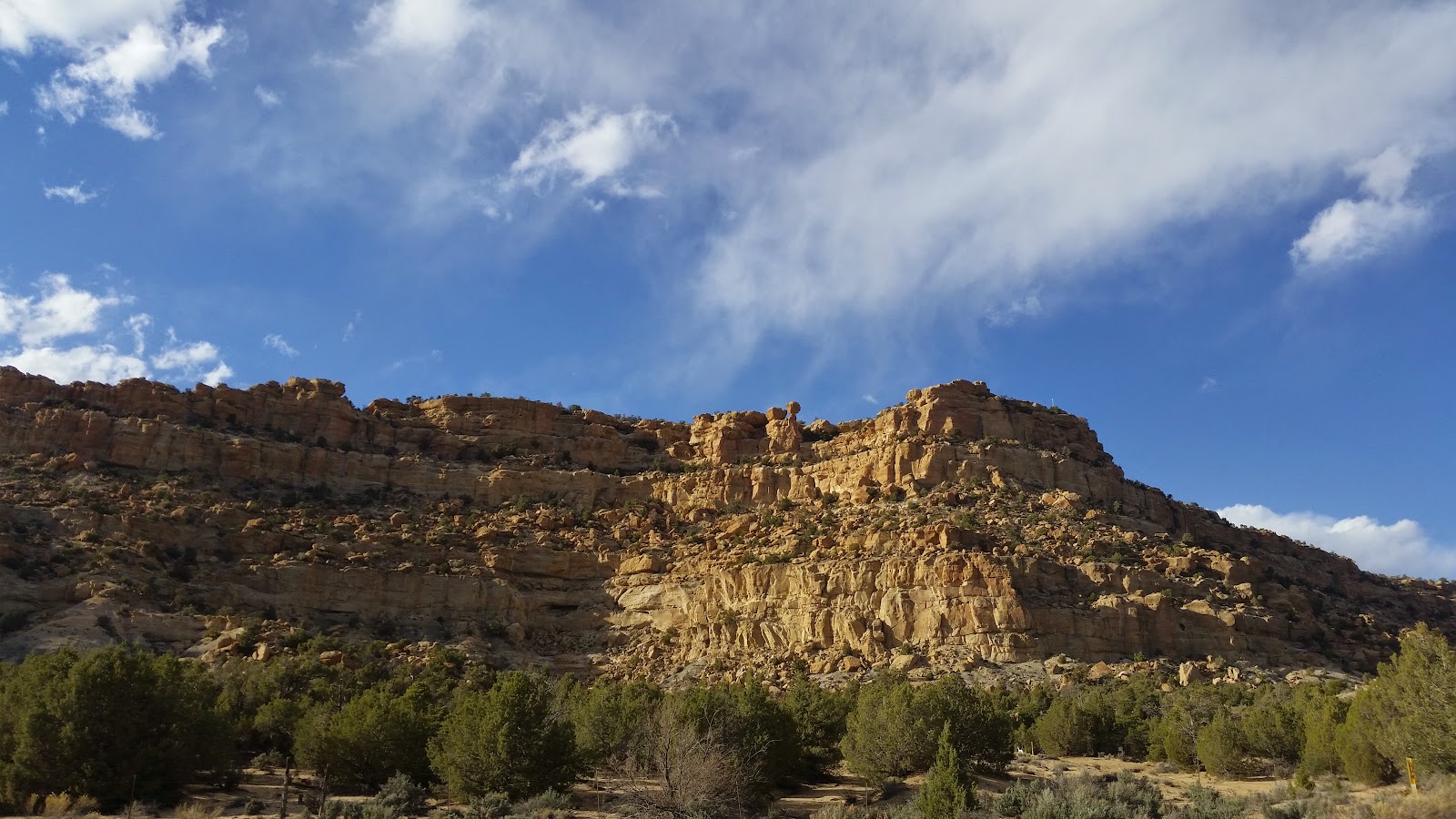 We drove west to Shiprock on the Navajo Reservation. I did not get a good shot of Shiprock, but it was a windy and dusty day, so the visibility was poor. This will give you an idea of the size of the rock: 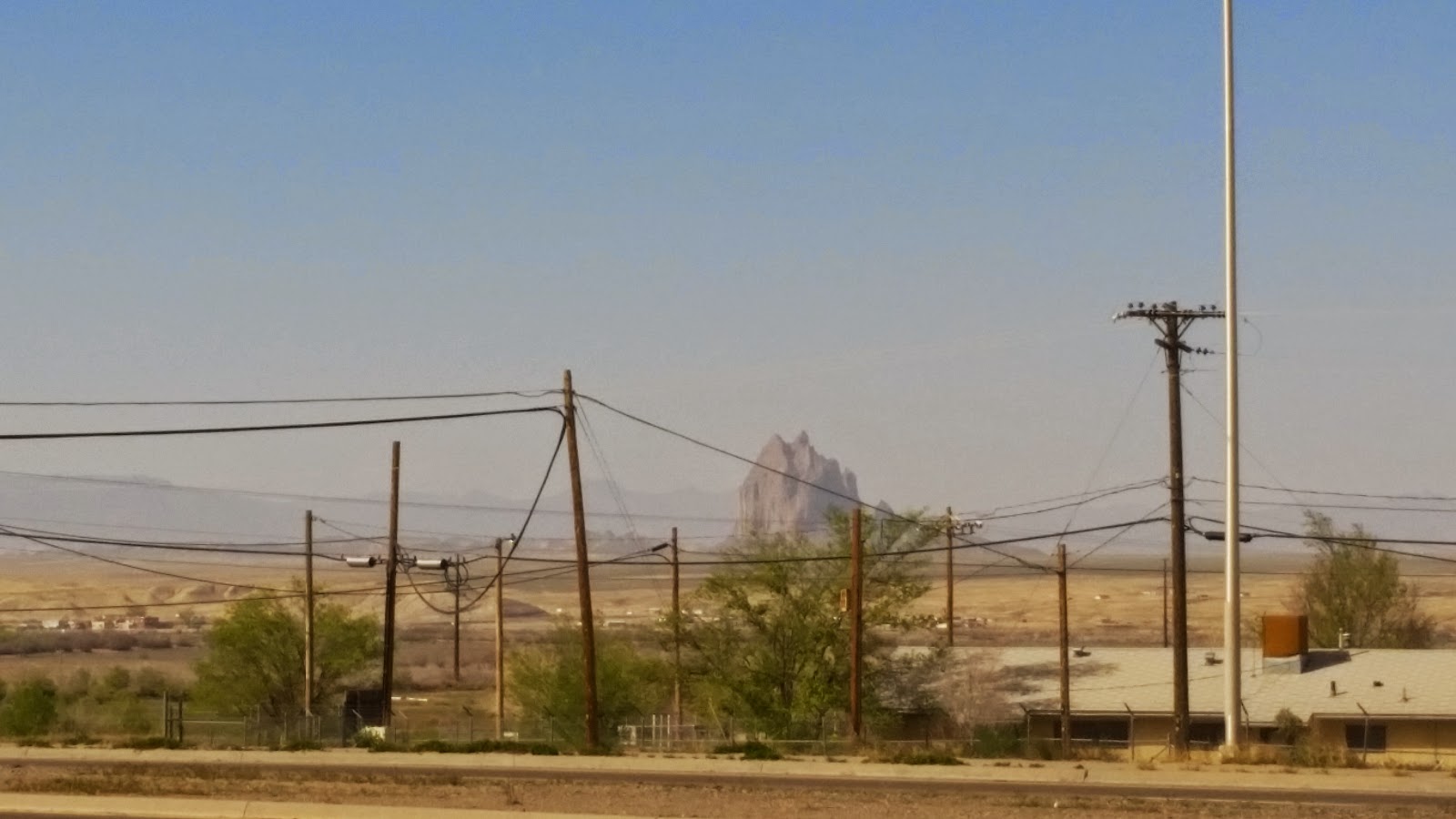 Wow, is that ugly.

We then drove north to Cortez. The large rocks were beautiful. We drove fairly close to 4 corners. We chose not to detour over there, we had both been there before. The wind was getting gusty and I was eager to get parked. The landscape started as high desert and then started to change to farmland as we approached Cortez. Here are a couple of shots of our views as we drove along: 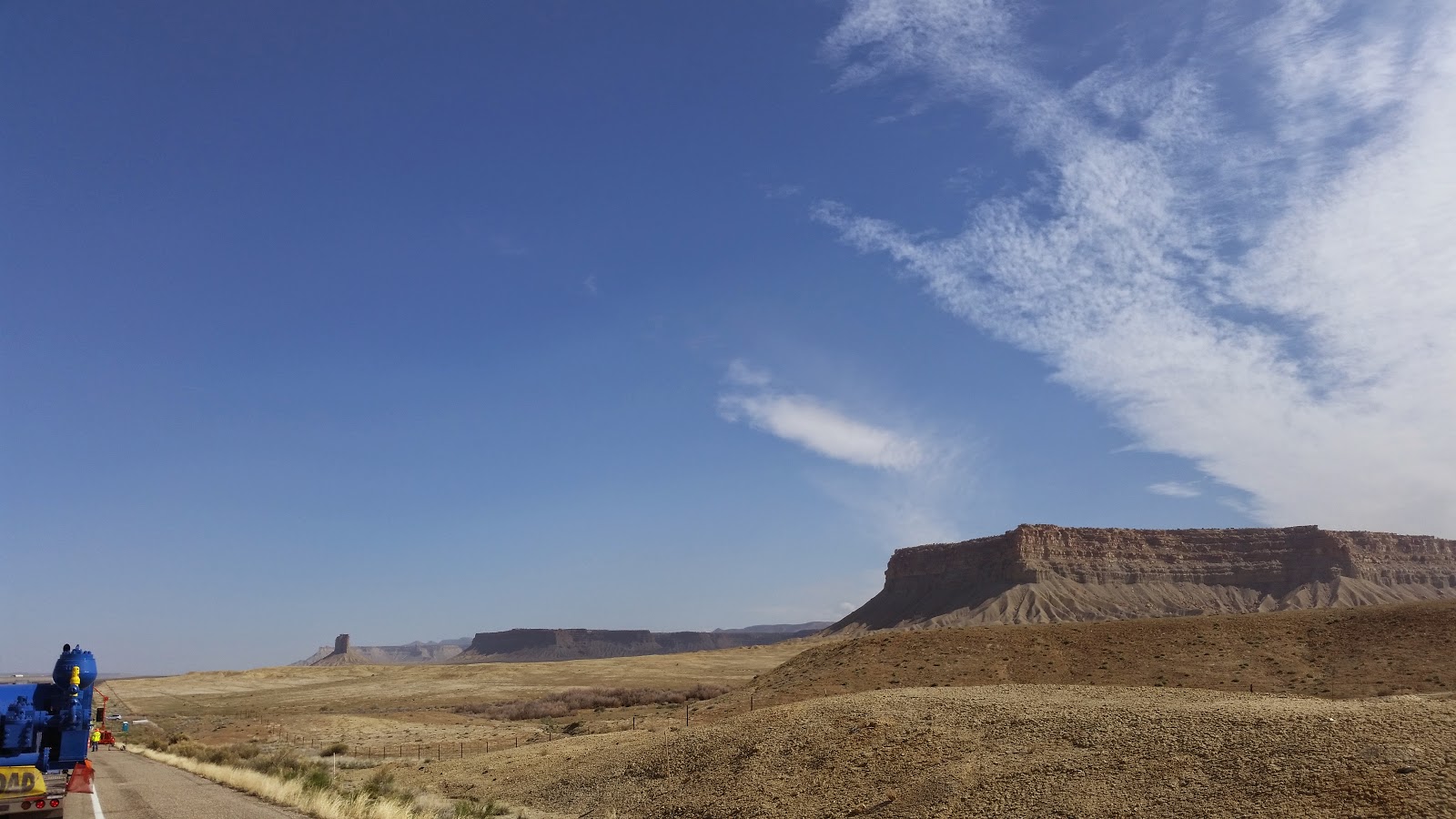 We got to Cortez about noon. We got set up at La Mesa RV park. It is not at all like the places we like to stay, but it is centrally located and with our Passport America discount, was not too expensive. We have full hookups including cable TV. With the National Semifinals on TBS on Saturday, if we stay, I can watch the games. We had lunch and then decided we had much of the day left, so we went for a drive. We started by visiting the Anasazi Heritage Center Museum. This is a great way to start the visit to the Canyon of the Ancients and Mesa Verde. We watched a couple of films and toured the excellent exhibits. 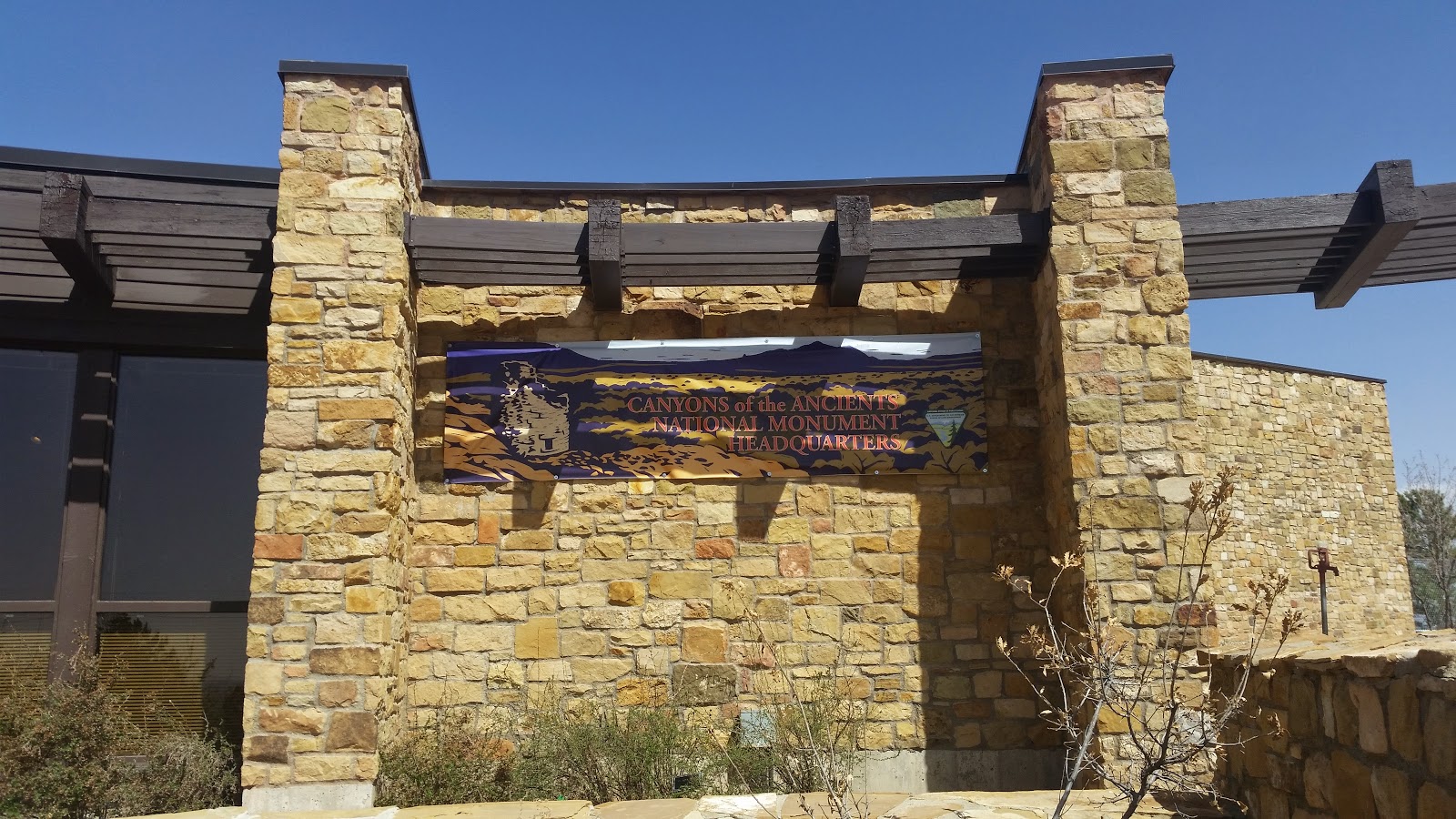 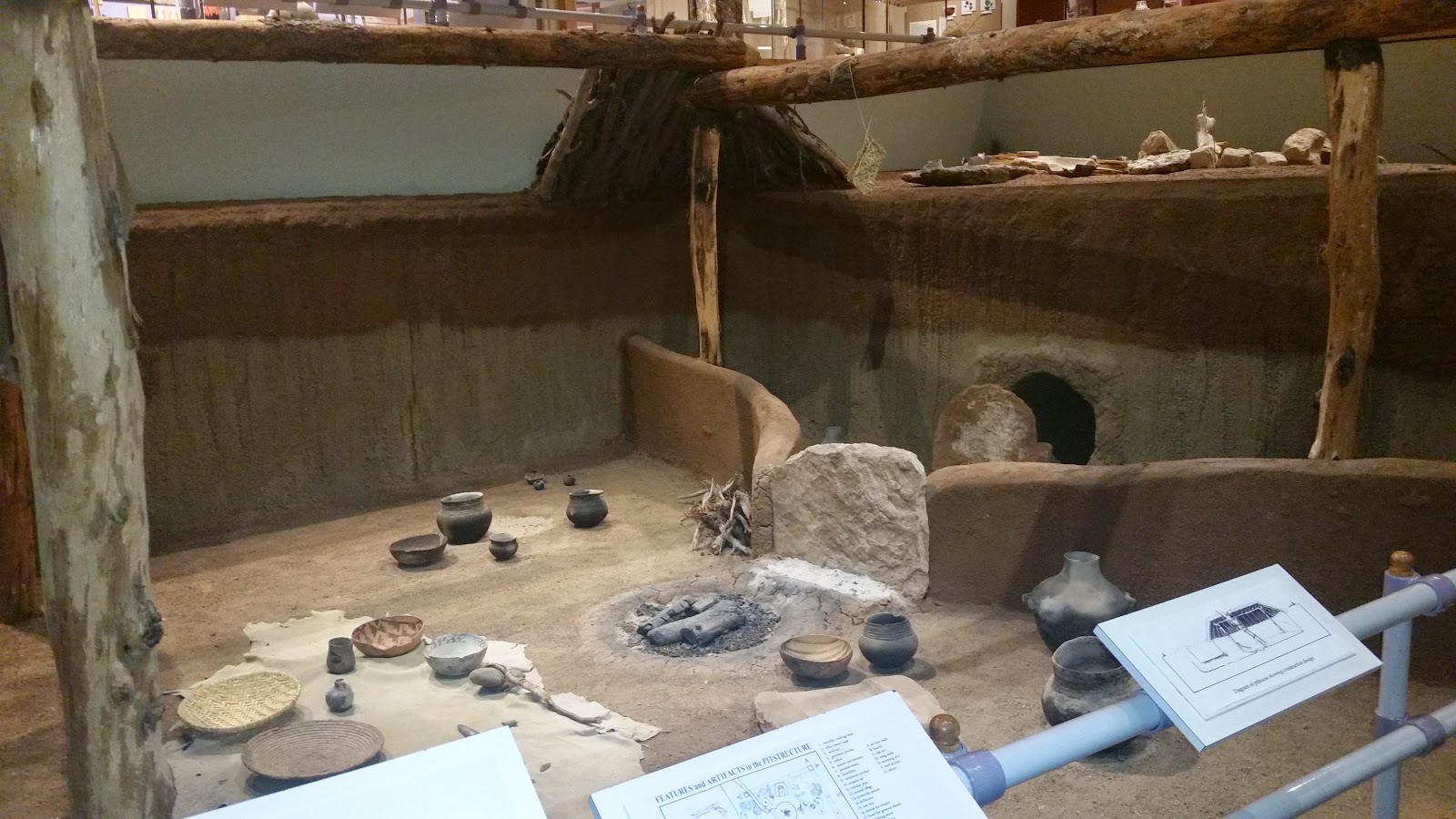 The pottery was really cool. 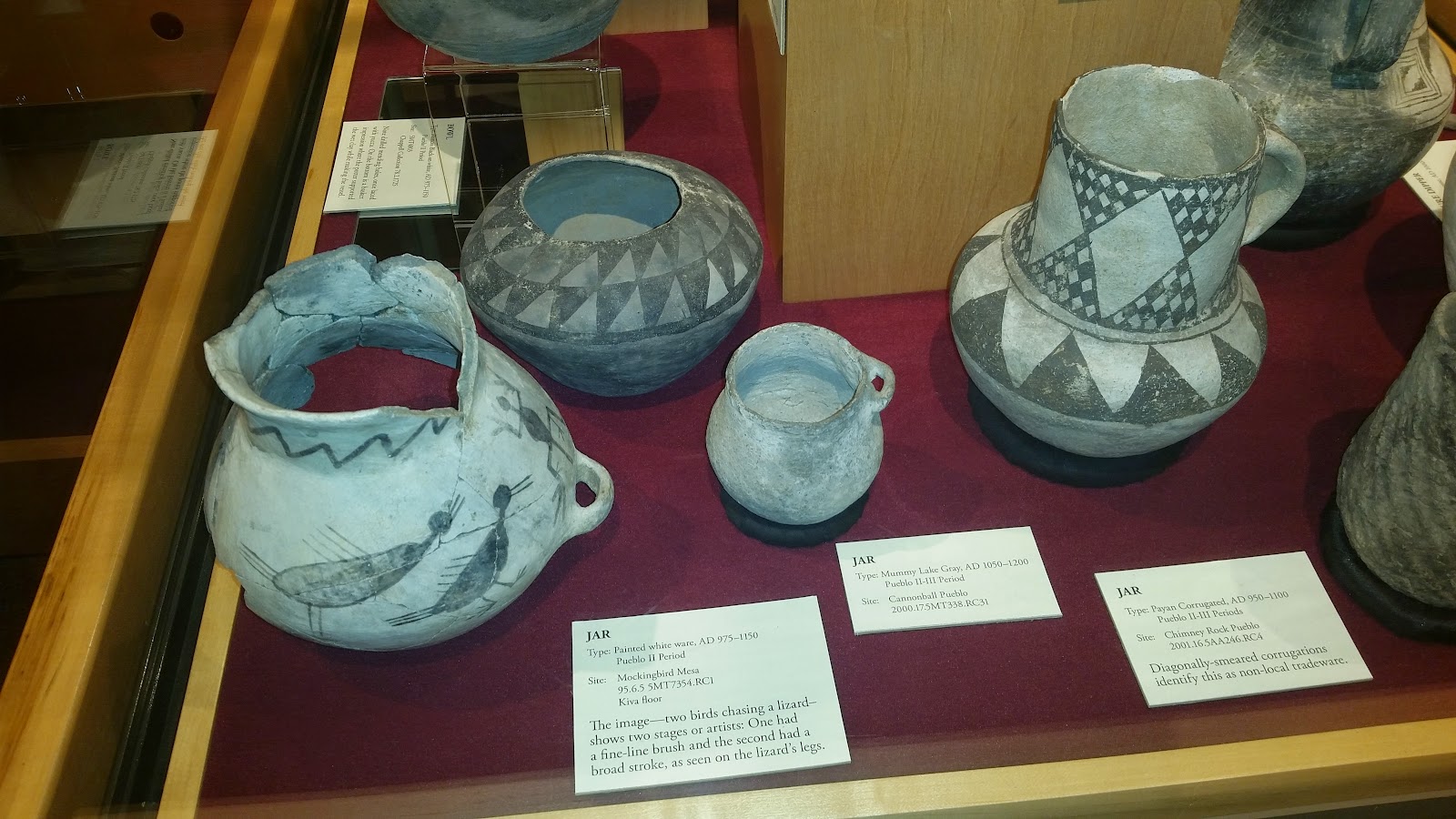 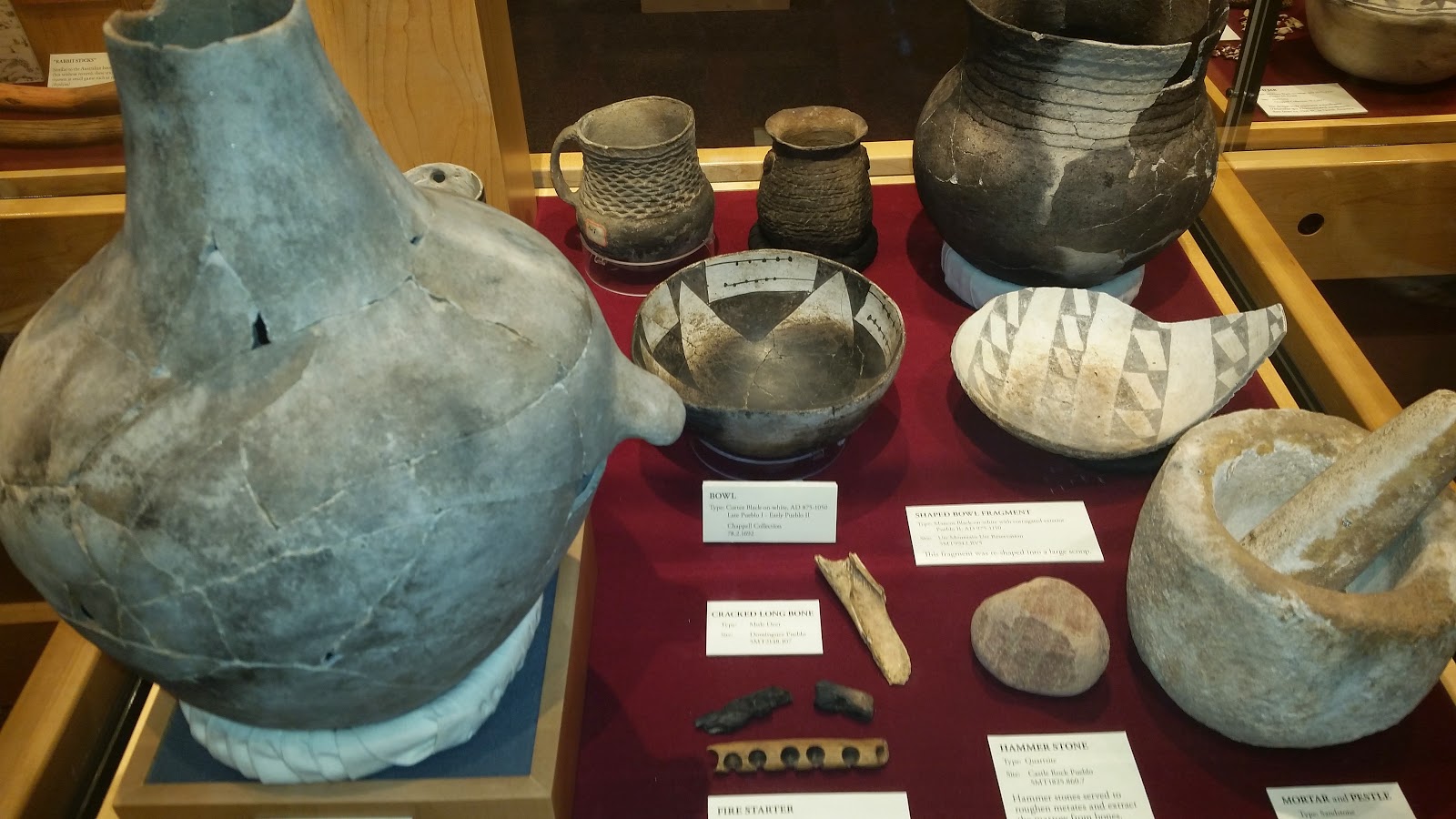 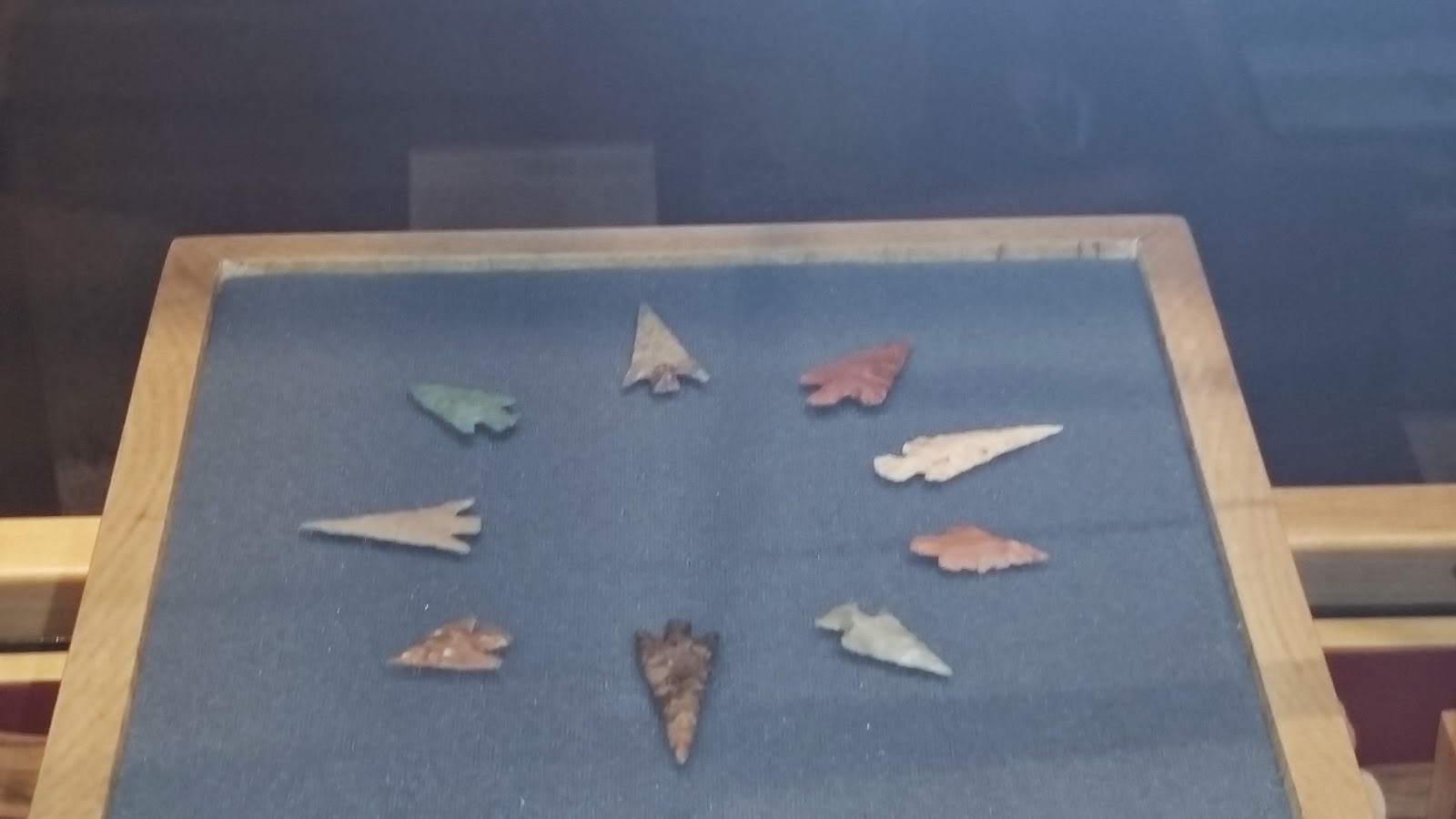 The one thing I learned is that the structures in Mesa Verde and the Canyon of the Ancients are considered hallowed ground by the Native Americans. It is considered disrespectful to be loud and not reserved.

We then drove over to Delores. It is a cool little town is right along the beautiful river. It is too cloudy to fish now, but I will come back some day to fish that water. Then we went over to Mancos SP to check it out. We considered camping there. We were disappointed with the park and campground. They had nice views of the mountains, but they were not visible from the campground. 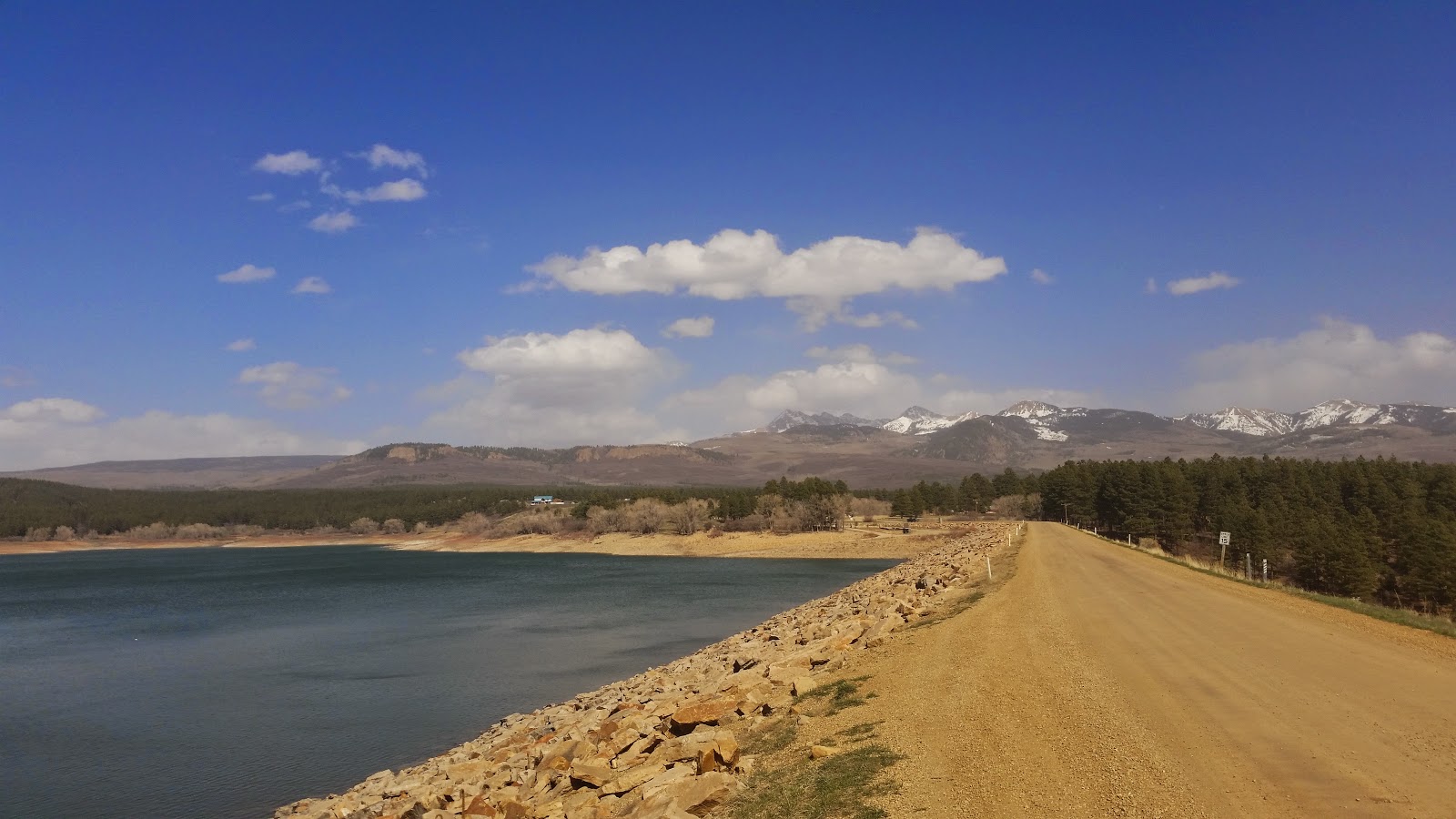 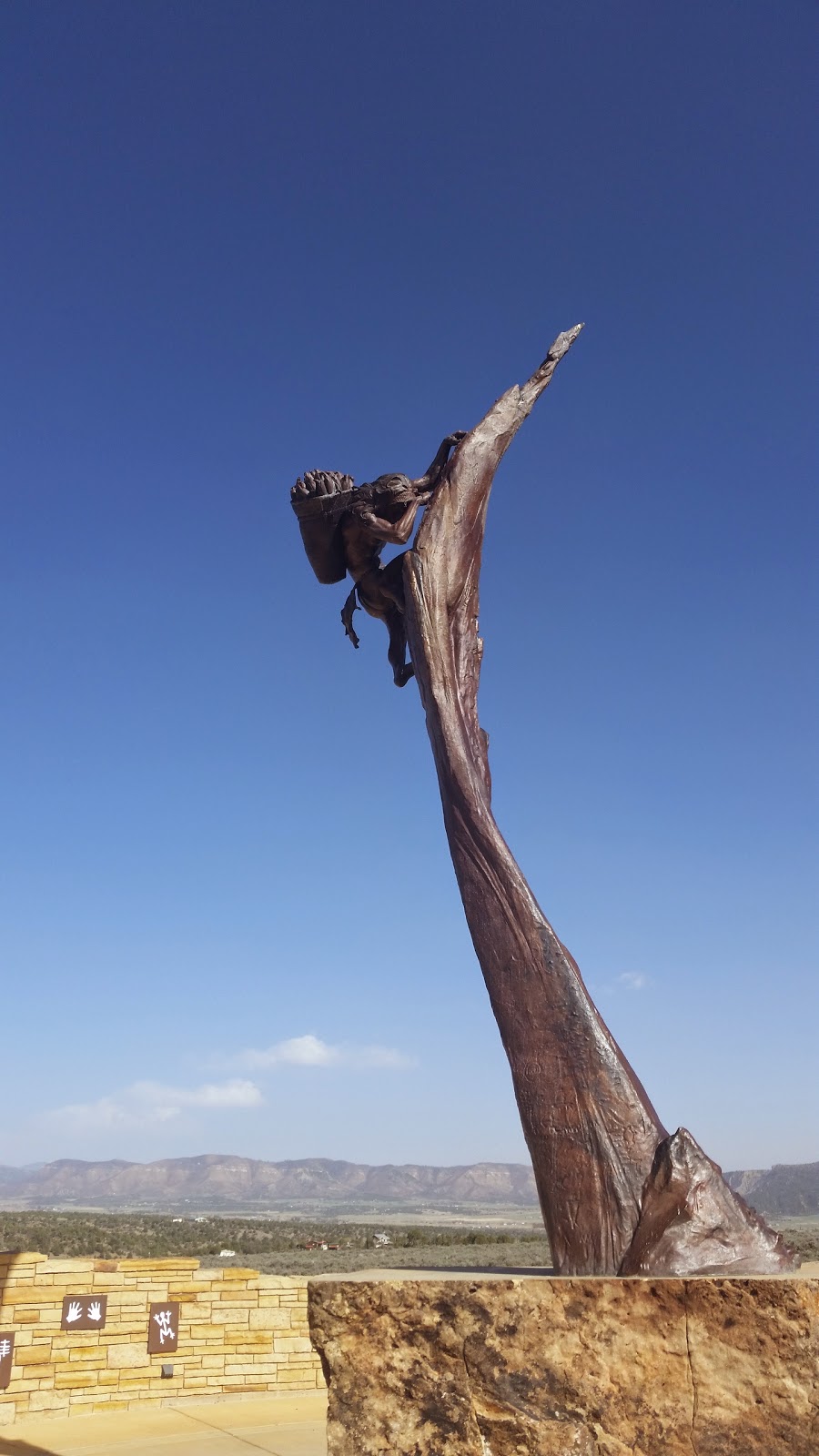 We then went to the new entrance of Mesa Verde NP to check out what we could do this time of year. We knew we would be limited, but we added Mesa Verde to this trip. Our timeframe is all based on the Utah NP's. They had this very cool sculpture. It really gives you a feel of what their lives were like.
The visit to the exhibits got me excited about visiting Mesa Verde the next day, but that will get and entry all to itself. Stay tuned for a mega entry of Mesa Verde.