When we got back to the rig after our Sunday hike, we looked at the weather and it looked ominous. Monday would be a good travel day, but after that the wind was going to come up and it was going to get cold. They were even talking about SNOW. Surely that would only be at higher elevations. We decided that it was time to move on.

On Monday, April 13, we left Ken’s Lake campground and drove the 150 miles to Capitol Reef NP. We decided to try to get in to the Fruita campground. It looked good. They have no electric, but they have water and dump. It is in the middle of a desert, but it is all green with a fruit orchard. They do not take reservations, but at $10 per night, we wanted to try. We were on the road by 9AM and after a very desolate drive we arrived at Capitol Reef NP. The campground was as advertised and we were able to get one of the two sites that were available. The view from the campground is awesome. This is the view out the side of the trailer: 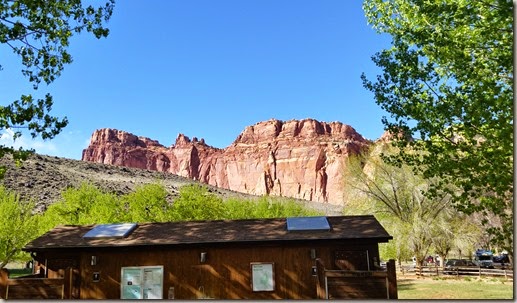 Yep, the bathroom is close. Not a bad thing after San Angelo…

Here is the site 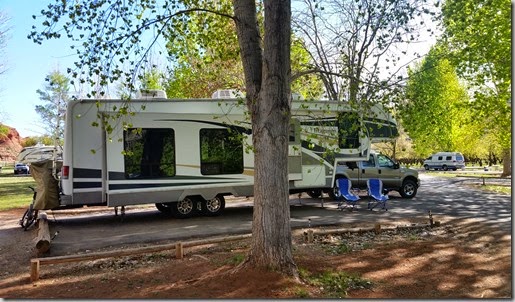 The history of the area is really interesting. It was settled by a Mormon family that later became 6 families. They found that the Freemont river provided enough water to grow an orchard. When they turned it over to the park service, they have kept the beautiful orchards and crops growing. It really is an oasis in the desert. I love it here.

We have been going pretty hard the last few days and Kim put her hiking boots in the closet and I don’t think they will be out for a few days. On Tuesday morning, I decided to take a little 2.6 mile hike along the Freemont river. The walk along the river was nice, at first. 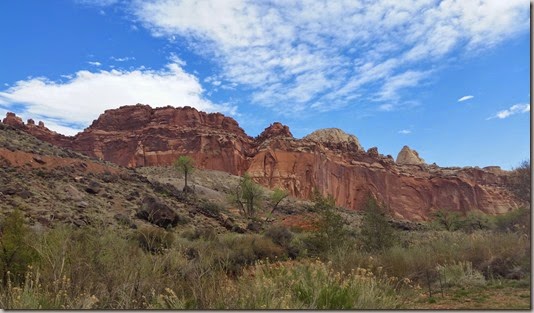 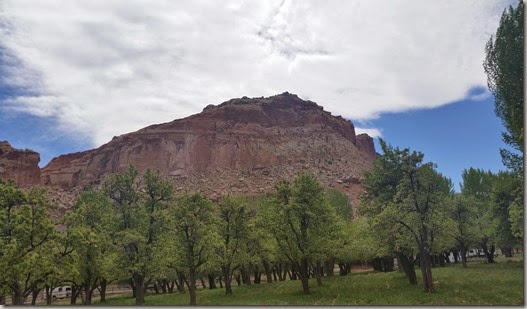 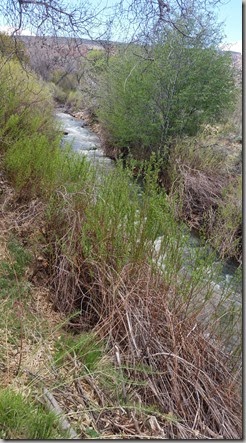 I did not notice the 600 foot elevation change in the trail information. I came to this and almost turned around. 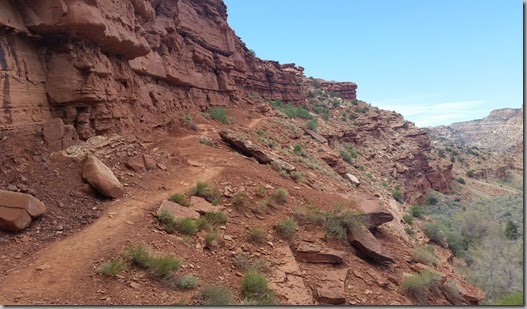 The trail became very steep and rocky. Not to mention the drop to the right was, um significant. 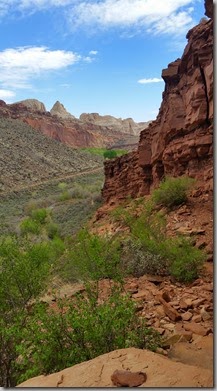 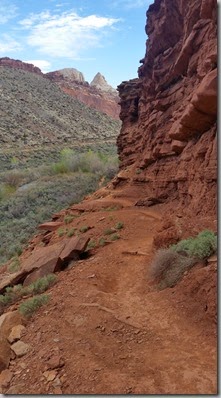 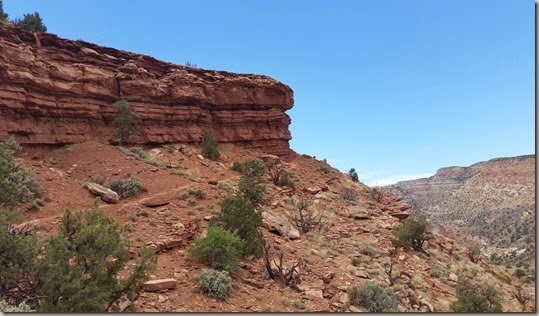 The views were amazing. I just kept walking and finally made it to outlook #1. 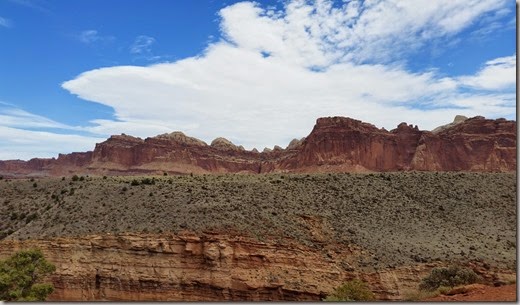 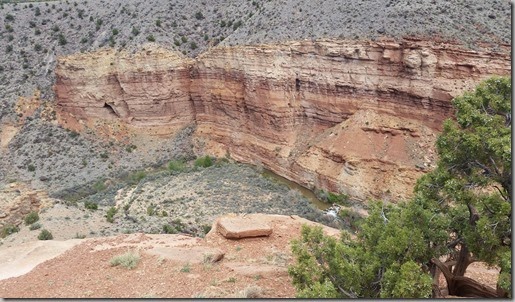 I then walked up to outlook #2 and I almost lost my breath. The view of the campground from up there was something I will never forget. 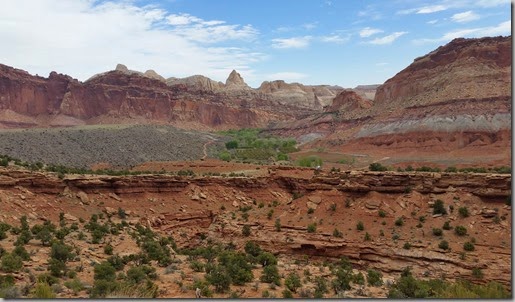 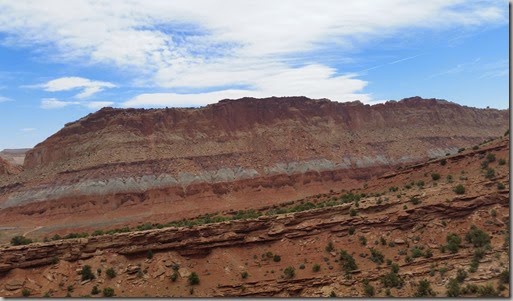 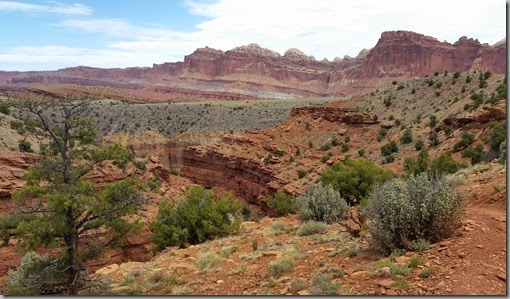 Take a minute and click on the following Pano shot. Then enlarge it and start on the left and scan to the right. It is the best way to understand the view.

Scattered around the hills are black rocks like this one. They are from a volcanic eruption many eons ago. They were scattered about by the ice age. 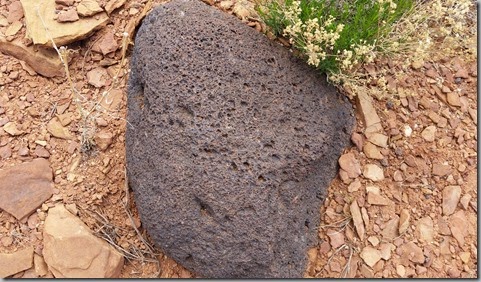 The settlers built a rock wall out of them.

When I got back down to the river, I took this shot of the blooms on a tree. Many of the trees in the orchards still have blooms on them. 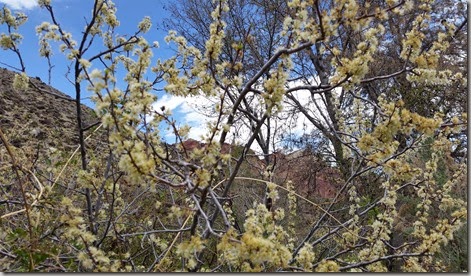 As the day went on it got very windy. They said that winds were over 50 MPH. We were pretty protected down in our valley. We did go out later in the day, but I will write about that in the next entry. We are off to a great start at Capitol Reef.

Posted by ktmissouri at 4:51 PM