On Thursday, April 16, we got up to some intermittent snow showers coming down in the campground. We really wanted to get out, but the weather kept us inside for most of the morning. The snow stopped and the sun even came out, so we decided to head up to the visitor center and talk to the rangers about things to do. The rangers at Capitol Reef have been excellent. The ones I have talked to have been at this park for more than 20 years and really know their stuff. We had been looking at a drive down to the southern end of the park that looked like mostly pavement. They warned us about the drive back north that would go to high elevation and it looked like they would be getting snow. I was not concerned about the snow, I am in my trusty 4X4 truck and I would be on pavement. No big deal...I thought.

We headed out down the paved road to Notom. This is a small Mormon community like many you see in this area. We were driving right up the waterpocket fold. We had high ridges on both sides, but the road was fairly flat. The road turned to dirt and then came miles of washboarding like I have never seen. I think I have a few fillings that rattled loose. Here are a few shots of this area: 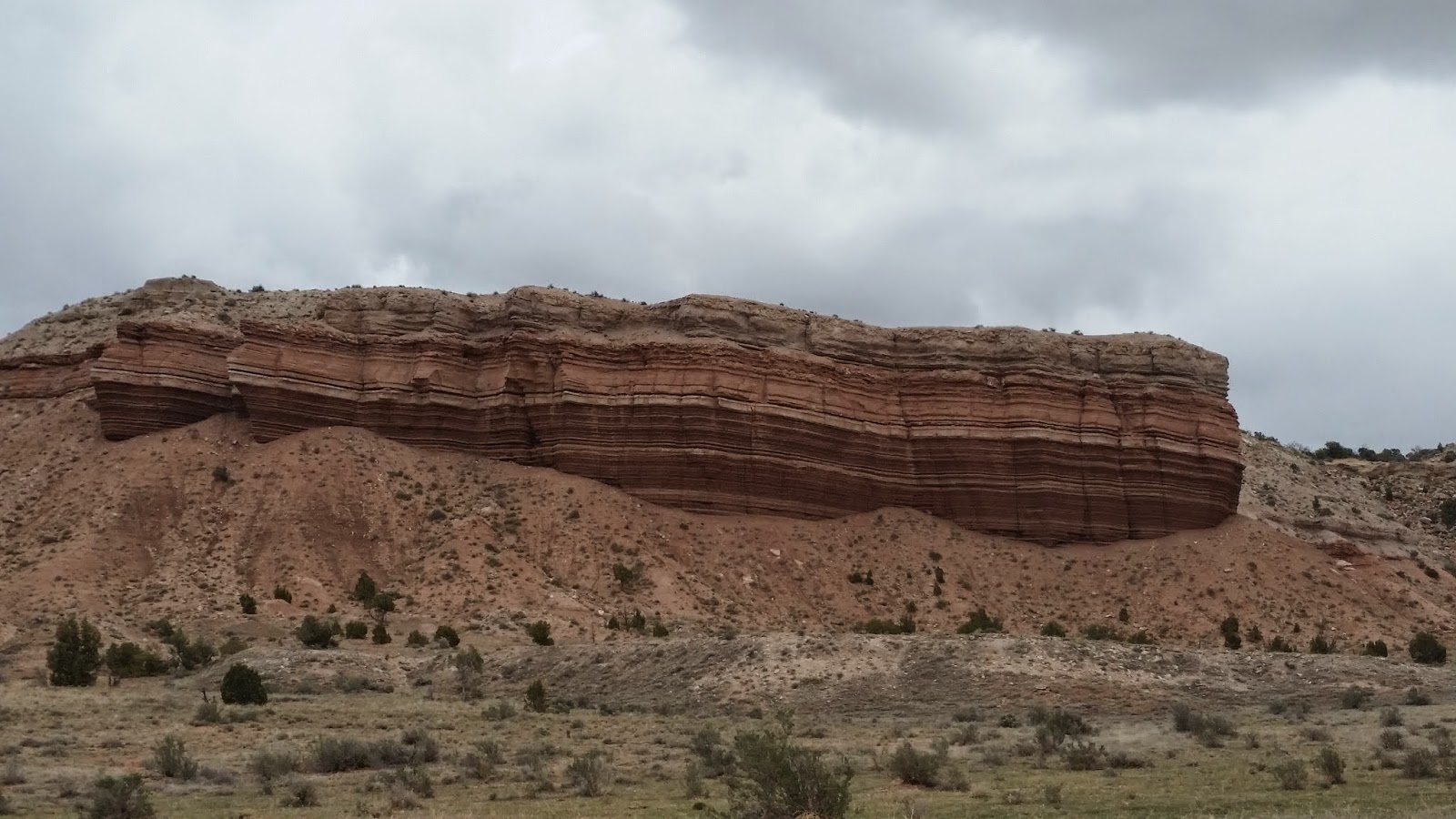 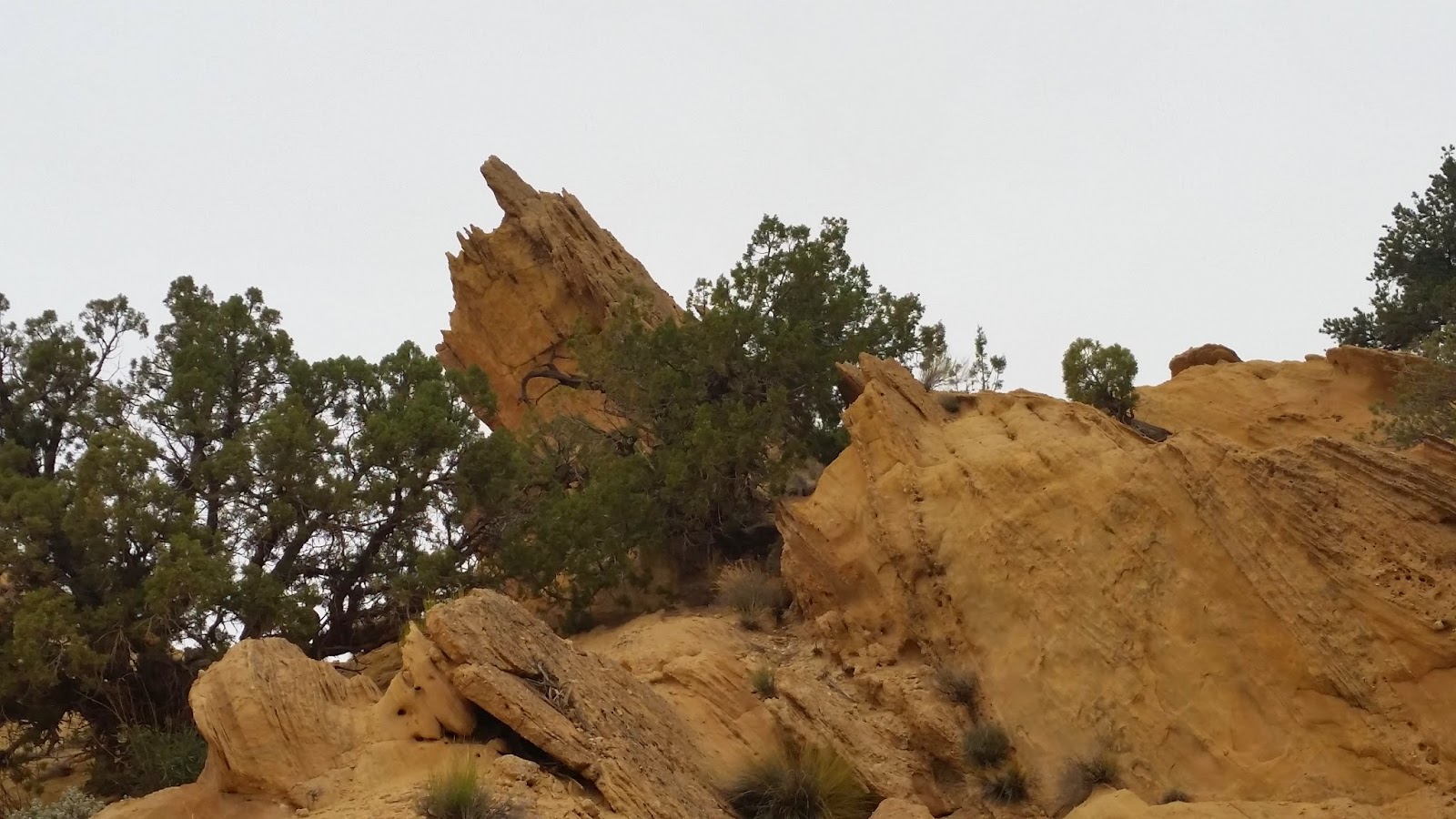 It was overcast, but the weather was fine at this point. We were thinking about turning around, but I do not have the ability to backtrack as has been well documented in this blog. So, on we went and the scenery just got better and better. 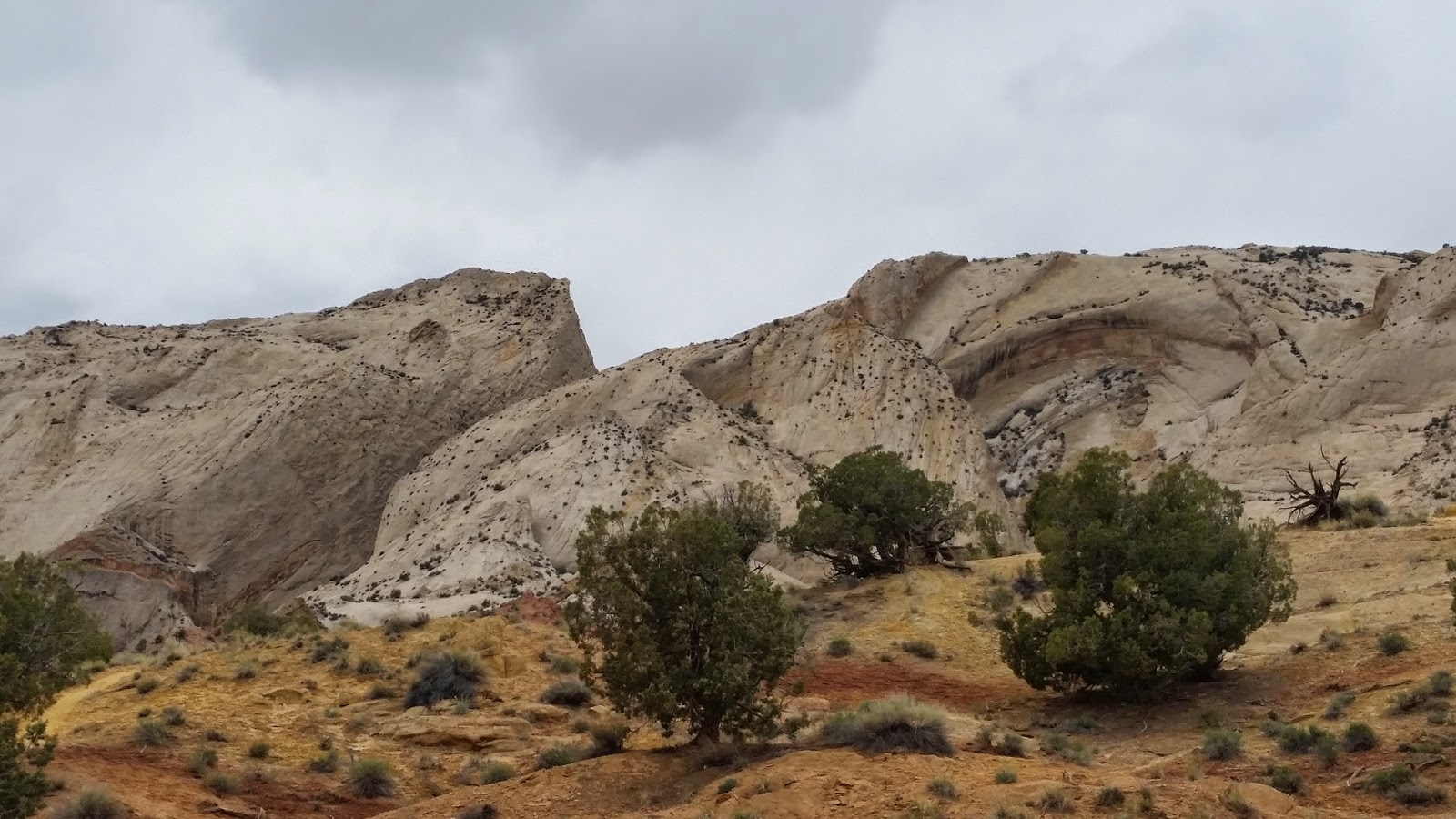 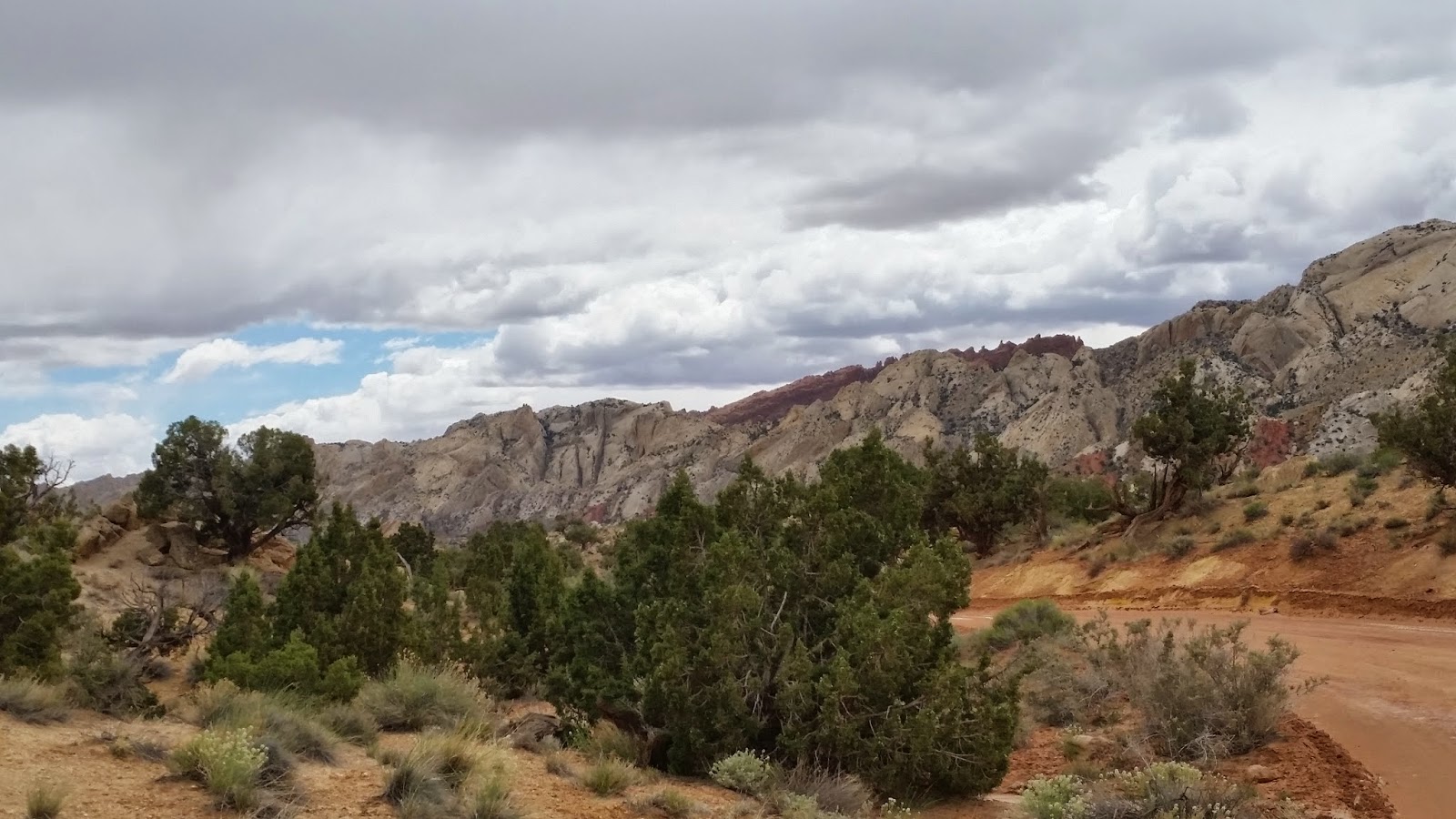 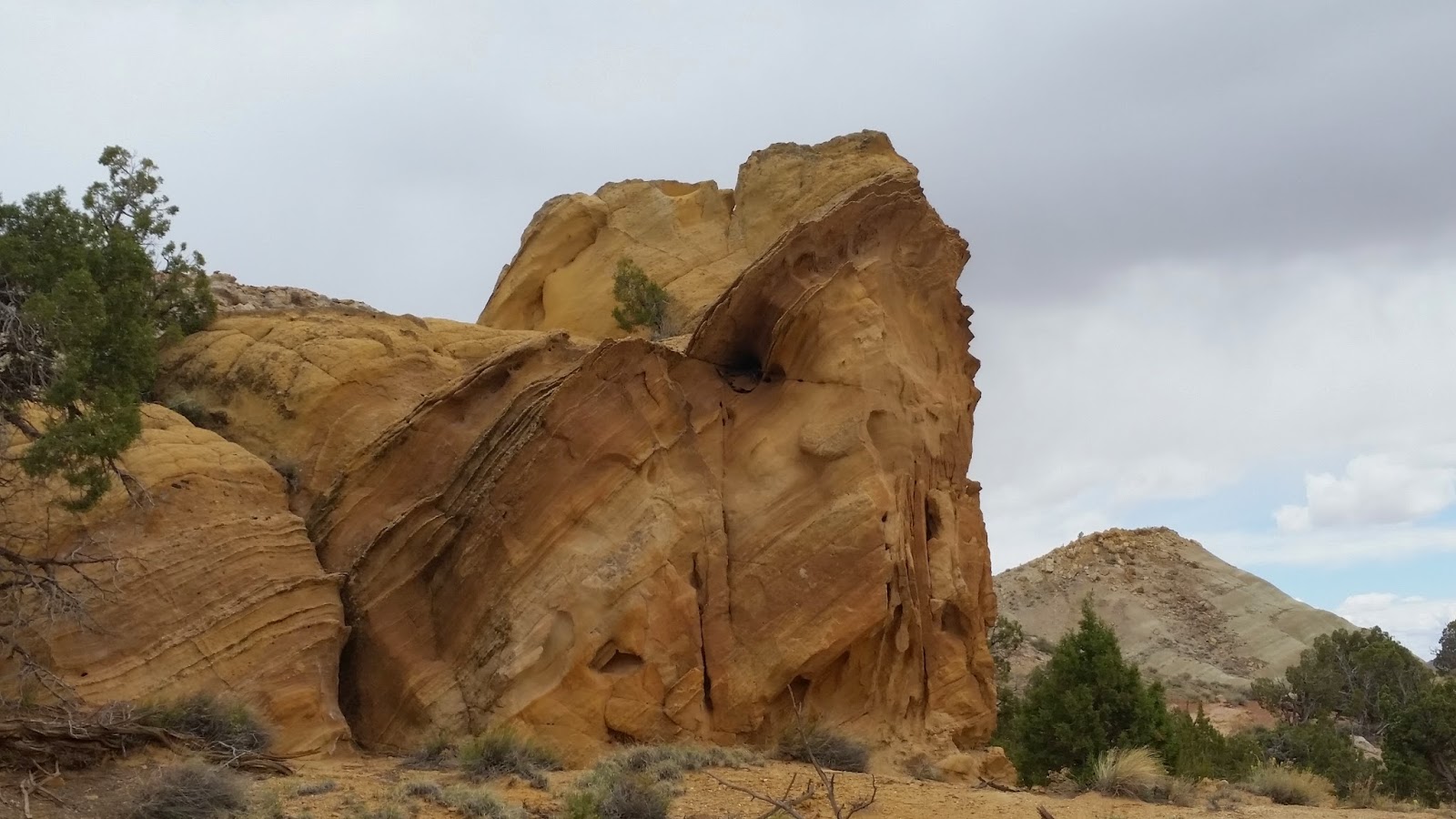 I remembered the ranger telling me something about the switchbacks. I came around a corner and saw this. Yep, we have to go up there! 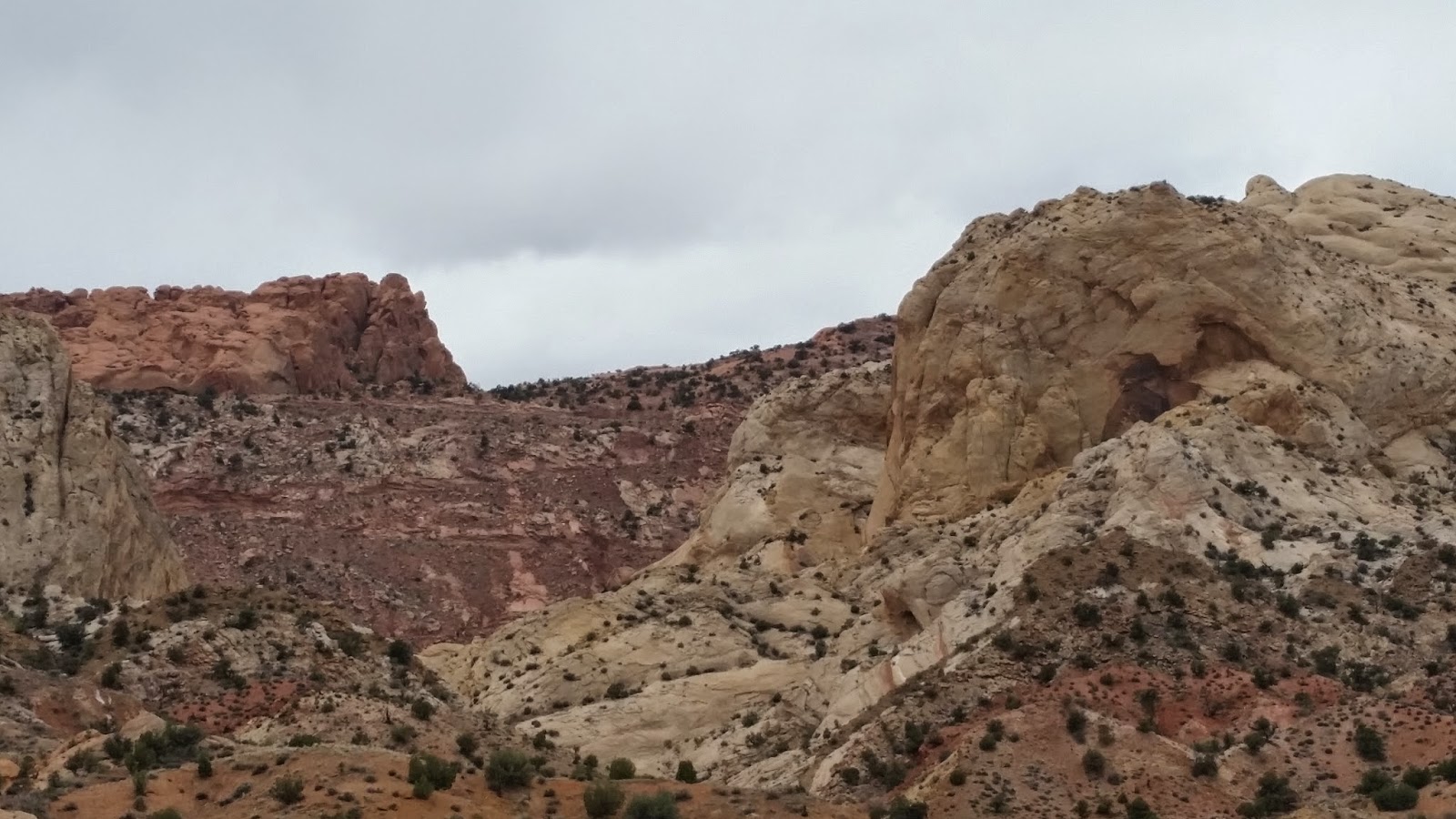 If you look closely, there are switchbacks up that face. Let's just say it was intense. 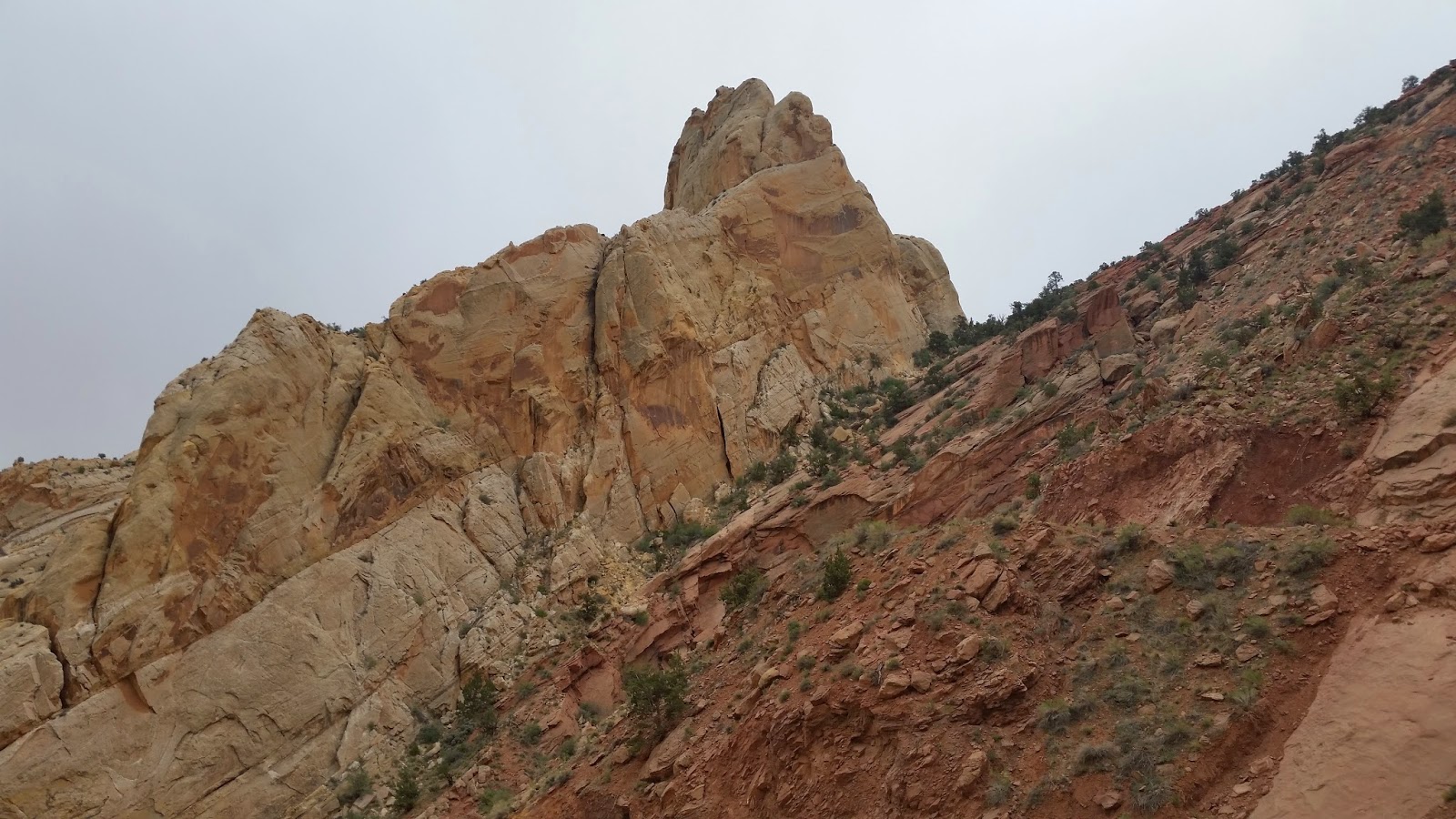 Here is a look down from the top. You can see the road in this shot three different times. Did I mention that the road was really rough also? 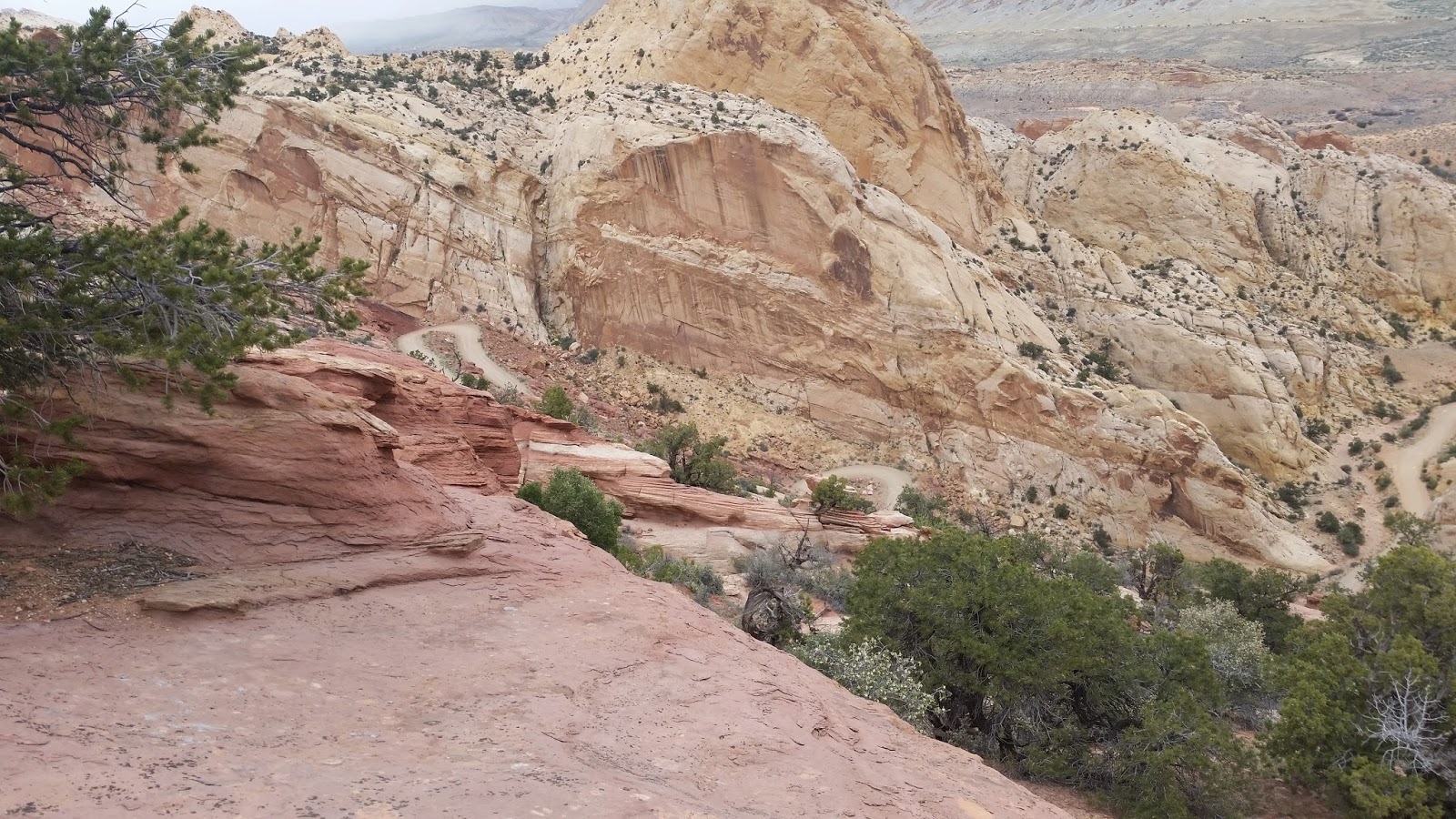 We drove on for a few miles and the scenery was still getting better. A small arch in this one. 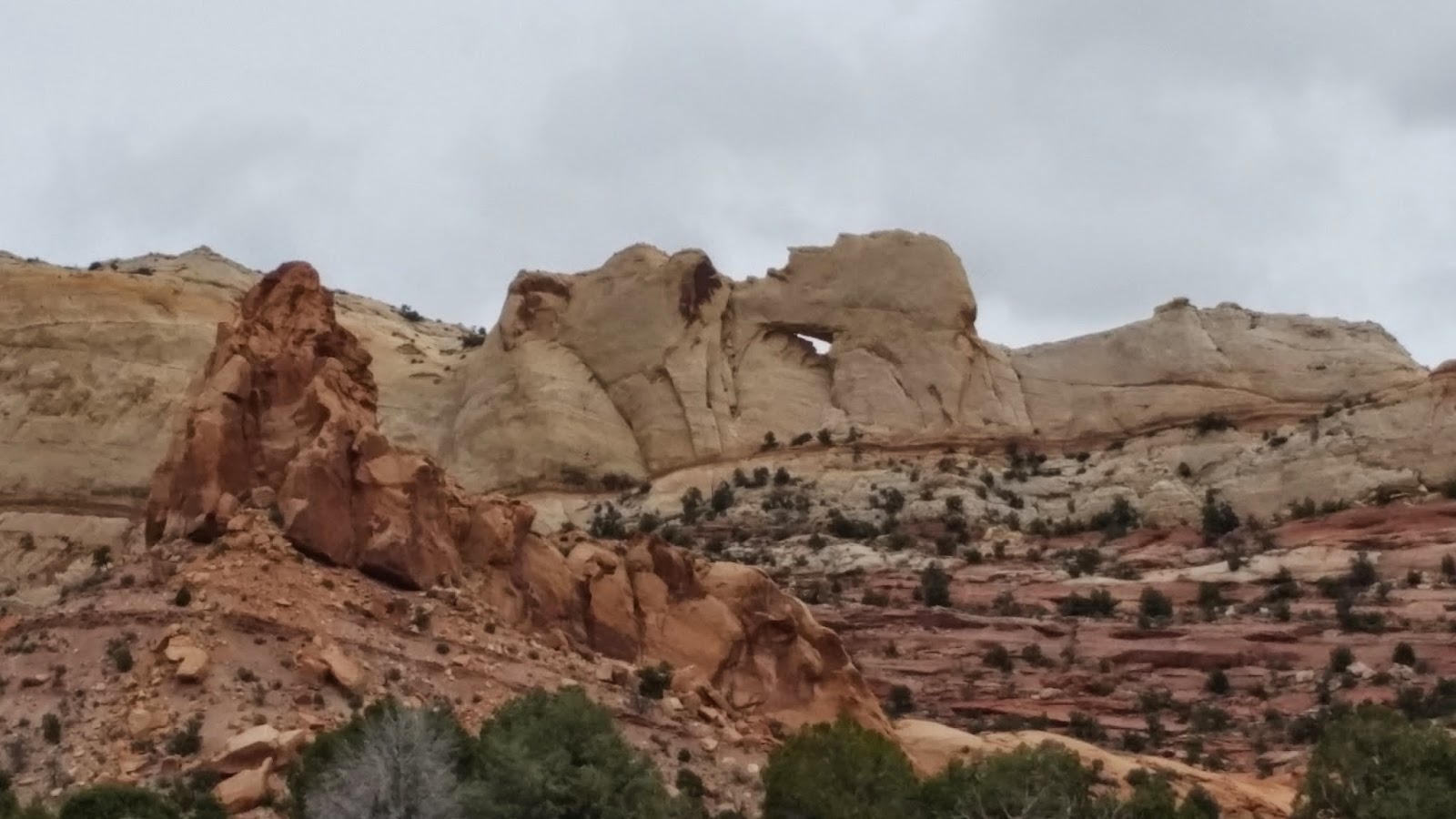 The road then turned to pavement and I was thinking "good we made it", because it was now snowing. Not hard, and not sticking, but it was all pavement back to camp. Then we hit a sign for the Grand Staircase-Escalante. Cool! I had forgotten we were going to go through the far northern part of this huge National Monument. Let's see what that is all about. We drove for a ways and the scenery was awesome and then we dropped into this canyon. And WOW! it was beautiful. Huge solid walls on both sides of red rocks. 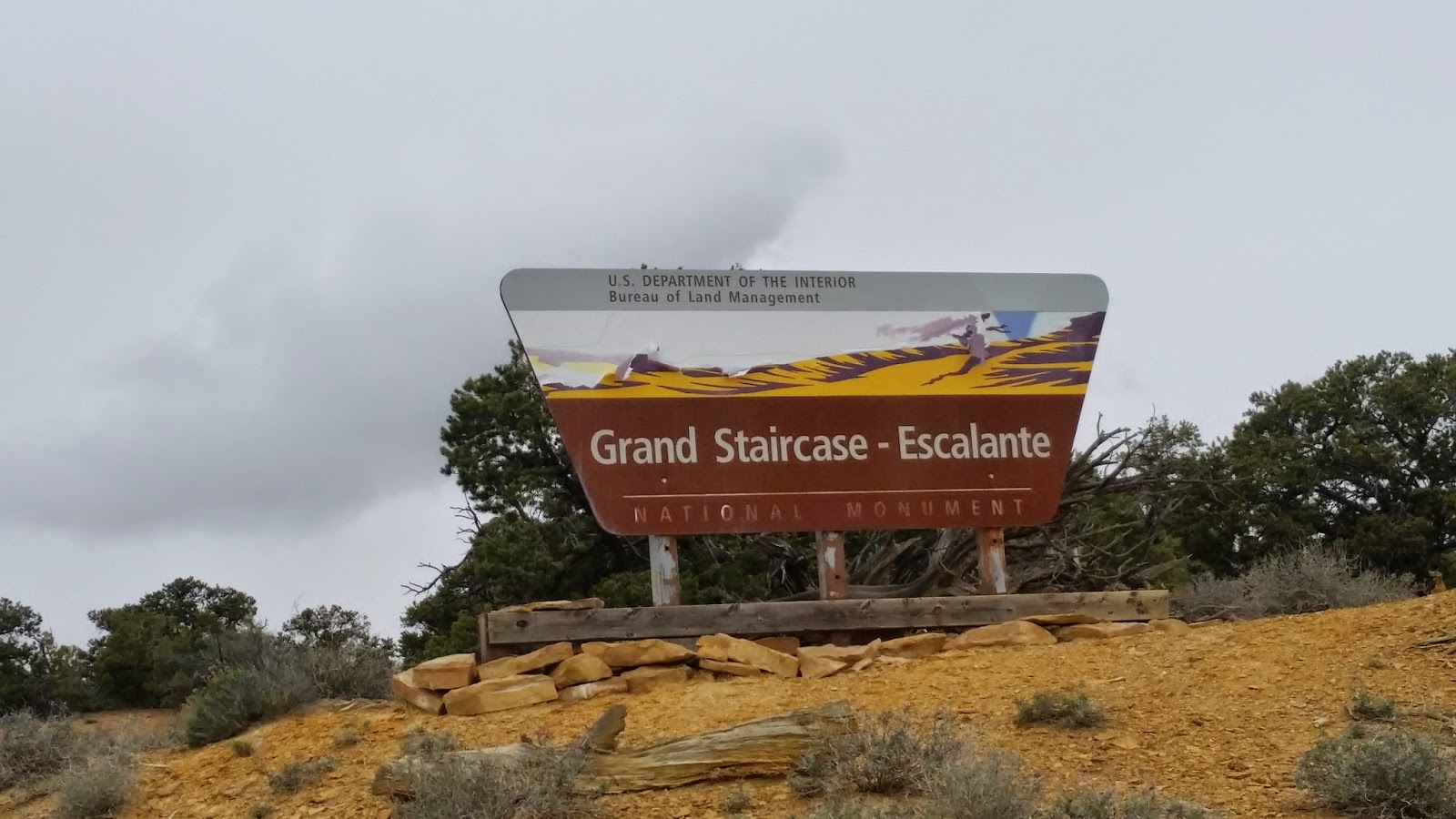 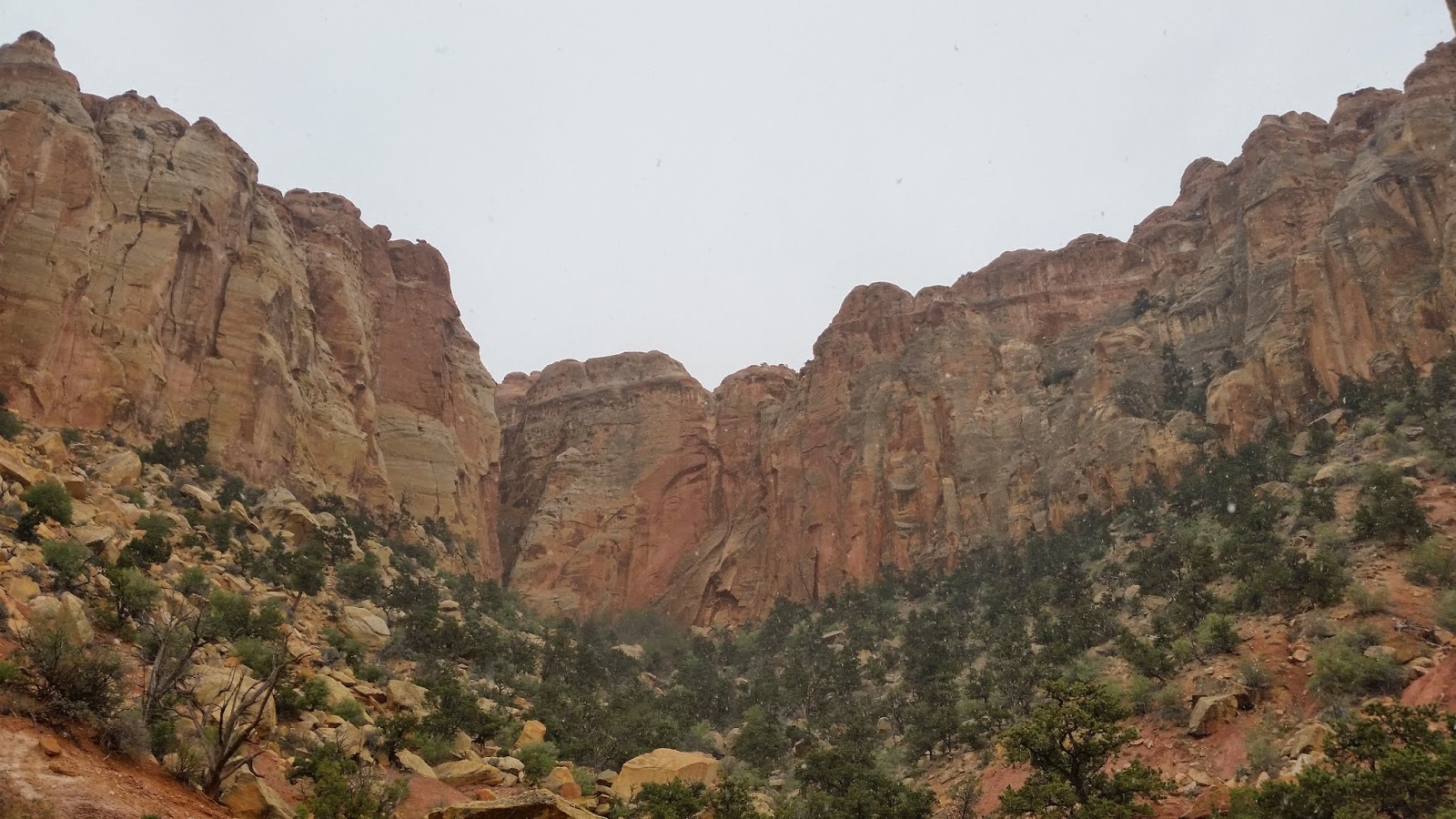 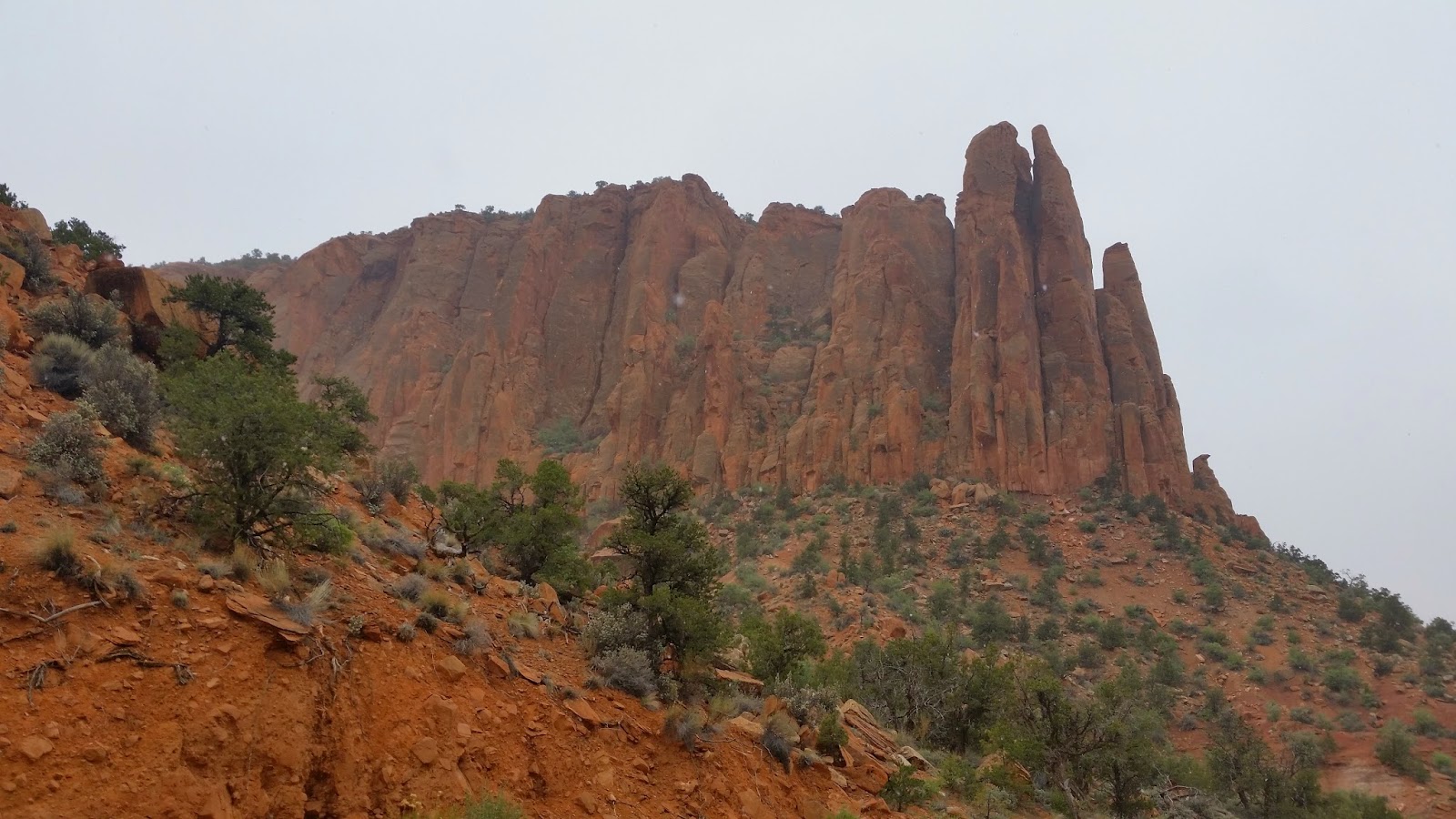 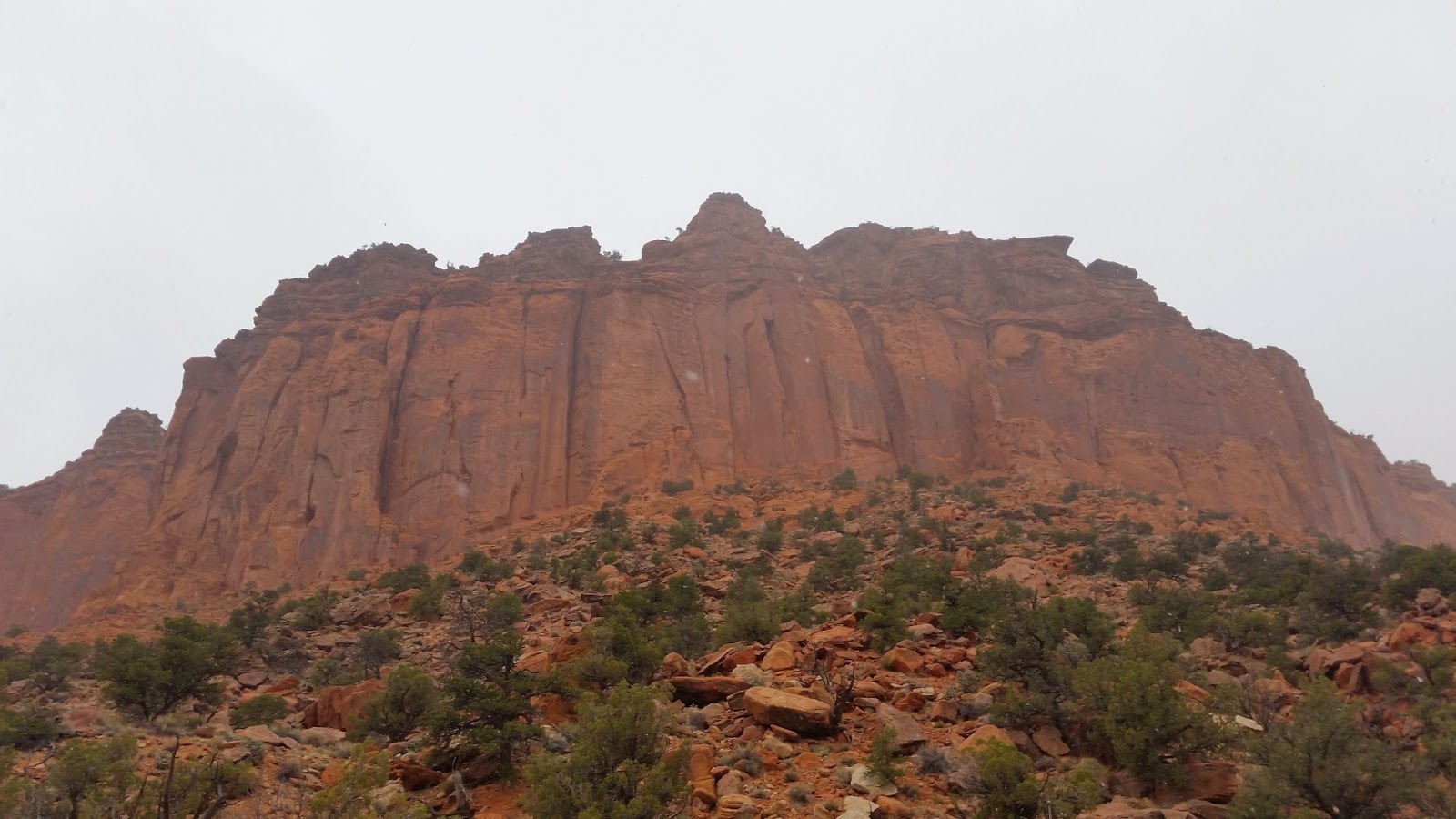 If you look closely in these pictures, you can see it is snowing harder. We drove on out of the canyon and then to the town of Boulder. Then we took a right on Hwy 12 back to camp. The road started to gain altitude. It kept going up. It is then the snow got much harder and before long all was white and the road was covered with wet snow. I took it slow and after some white knuckle  driving for about 40 miles we made it back to Torrey. 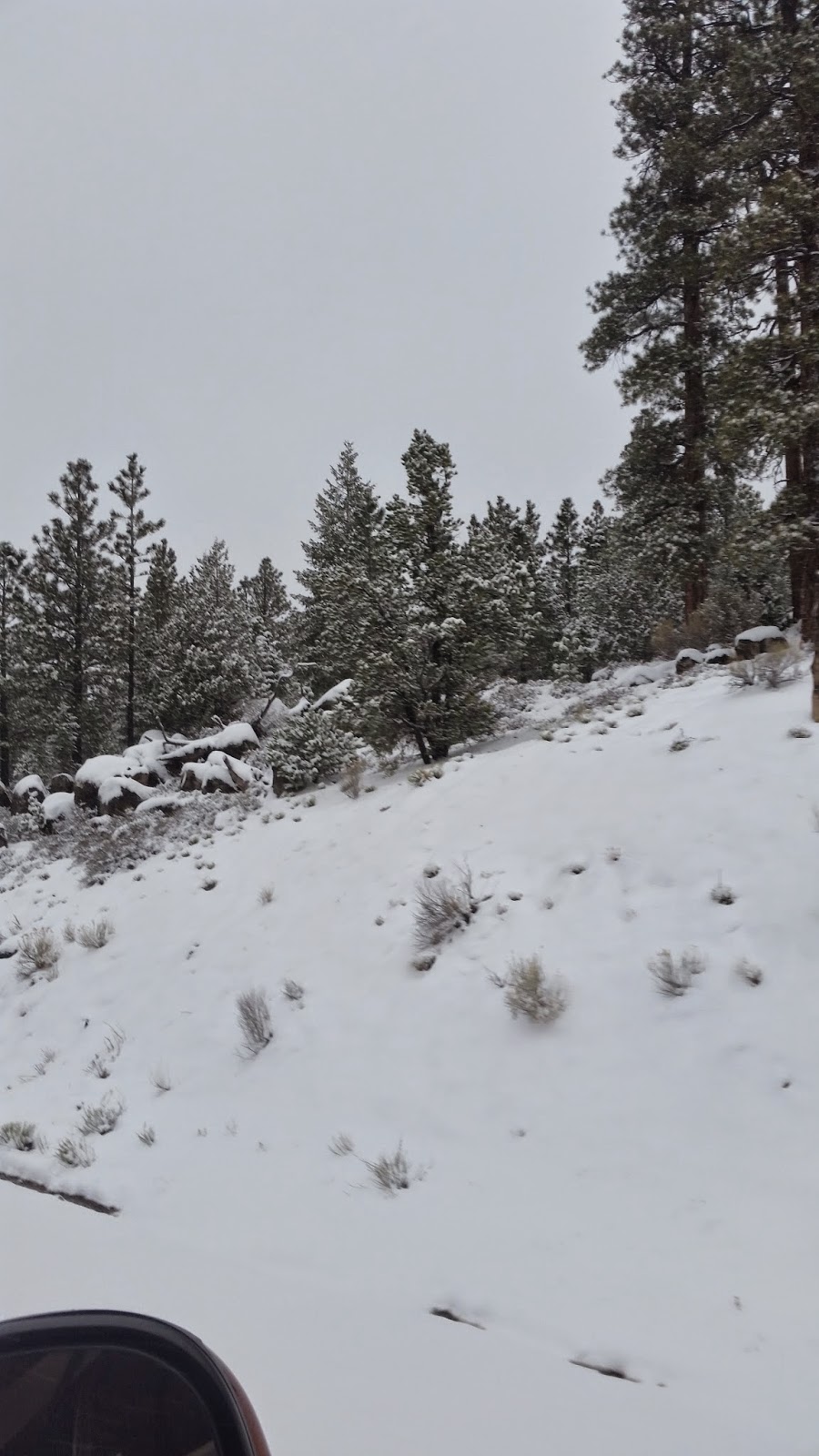 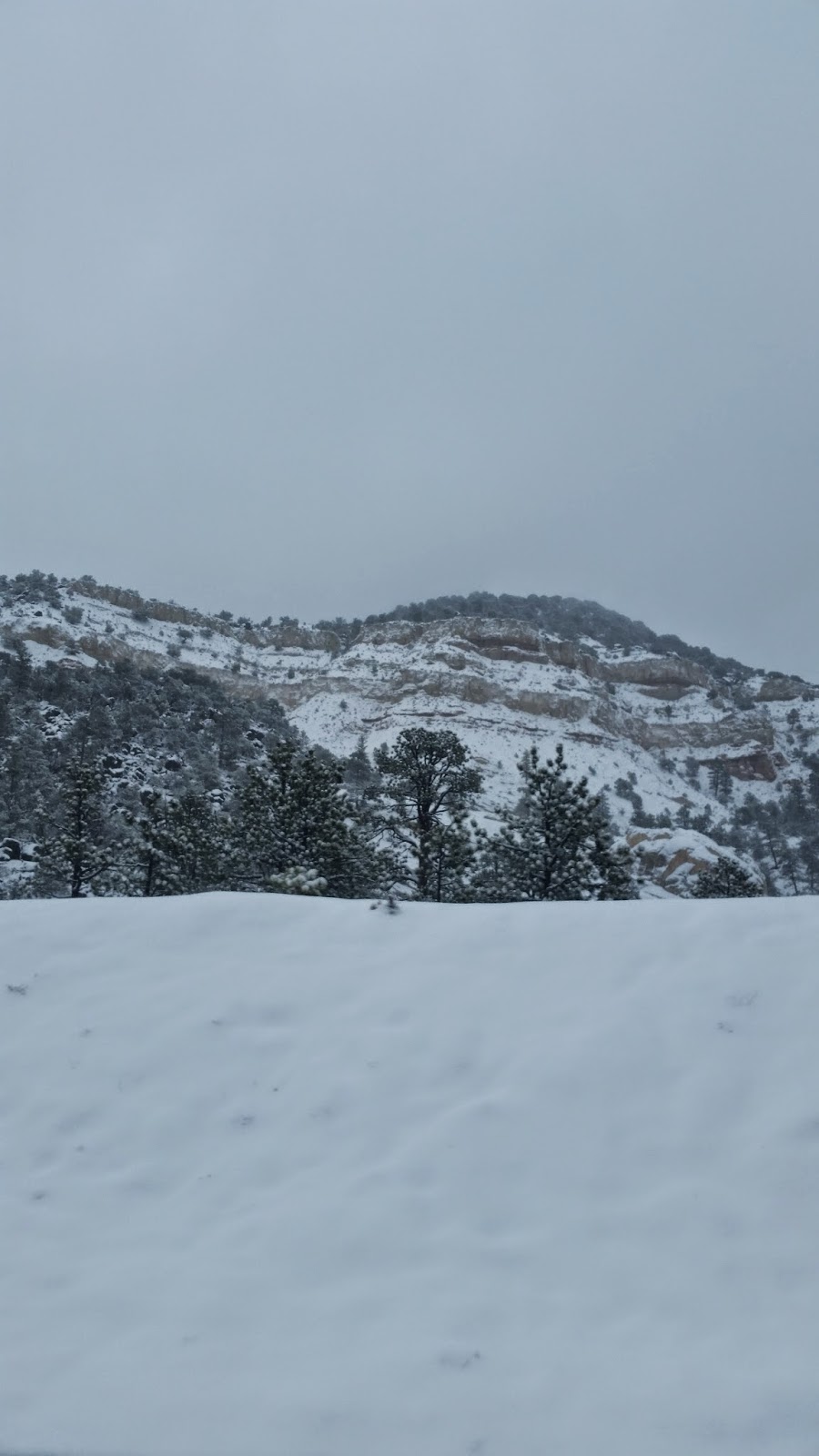 When we got back to Capitol Reef, it had snowed there also. Here are some shots of the formations with snow on them. Very cool! 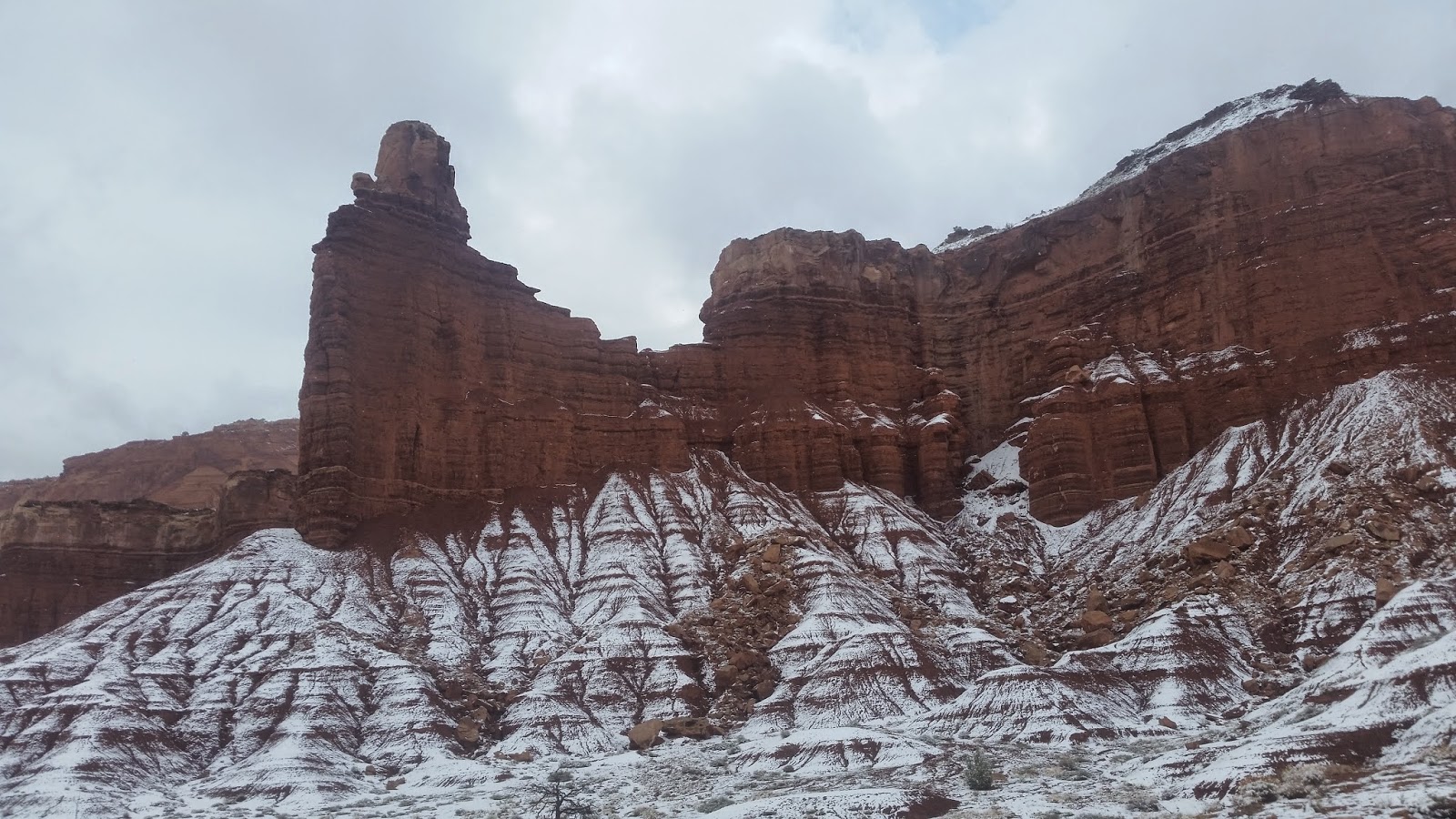 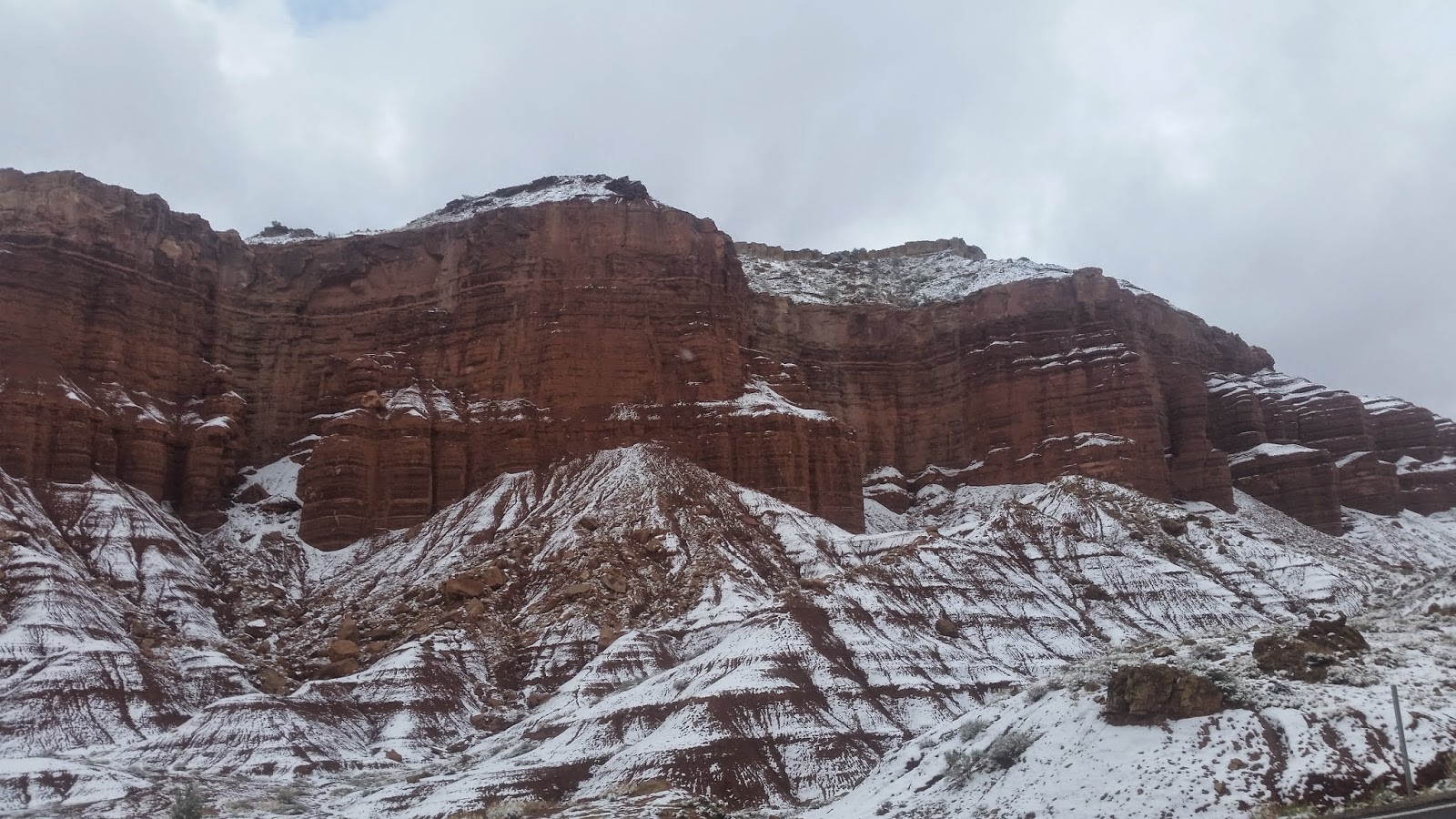 There was even snow back in the campground. I had to clear snow off of the solar panel. It was all melted by noon the next day, but it did create a unique experience. I know this is a large post, but that all happened in one day. We drove about 130 miles and I was tired at the end. It took us over 6 hours. We talked about what else we wanted to do while we were here. I think we will do much more. Stay tuned for some fun hikes and the drive that could go down as epic, but I am getting ahead of myself. I hope all of you have great days like this one. Get out and enjoy your life!