On September 10, I made the beautiful 29 mile drive back to St. Maries to get a few groceries, diesel and my fishing license. The road is fairly flat and follows the path of the river. There are tall mountains on both sides. Along the drive I saw a coyote running along the side of the road. That was the first of many wildlife sightings during the time we were staying at Huckleberry Flats.

On Friday September 11, I was up early to check out the river and see if the trout were biting. The significance of this day was not lost on me. I thought about the happenings and where I was on that fateful day. Maybe one day I will tell my story of that day in this blog.

There was little activity in the early morning and I had no interest from the fish. I took a break for lunch and came back mid afternoon and fished until dark. I had many rising fish, but no direct interest in my fly. I changed flies about 5 times with the same result. The scenery was beautiful, but I was a bit frustrated after getting shut out on day 1. This is also on the heals of getting shut out in Yellowstone and then what happened in Glacier made it difficult to tell Kim of the results. 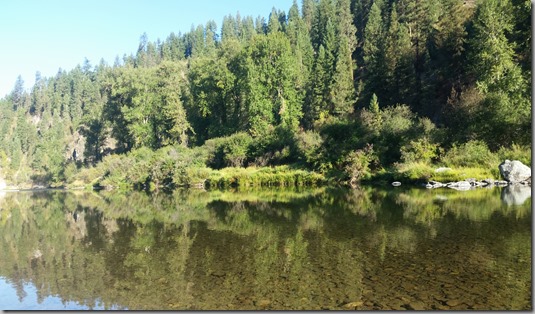 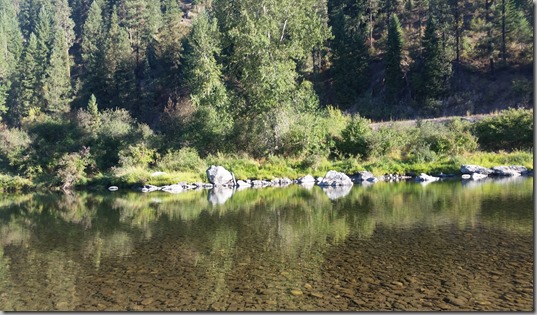 On Saturday, September 12, Kim and I decided to take a kayak trip on the river. The problem was how to do a shuttle. I could have unloaded my motorcycle, but the bicycle was easier and I could also get a good workout. I drove the truck to the town of Calder, Idaho (Population 6) and parked the truck. I rode back to camp. I thought the ride would be around 5 miles, it turned out to be 6.5.

We got on the water and Kim paddled while I fished. OK, we both paddled, but I did a bit of fishing. We could see down into the crystal clear water. I could see a bunch of fish, but they were not trout. It seems this river has a bunch of suckers in it.

After we paddled for bit, I was fishing when Kim said “look up”. It was a beautiful adult bald eagle flying right above us. I had my Go-Pro on my helmet running and I got some footage of it and I took a couple of stills. I am working on how to edit and post the video. 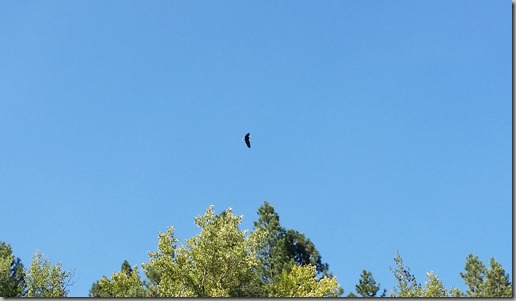 We went on and stopped in a number of holes along the river and fished. I was still having no luck, but the excitement of seeing the bald eagle and the beautiful weather still made it an excellent day.

I fished in one hole for a long time and then Kim said, “ Shawn, Look a Bear!” It was a large black bear about 100 yards down stream from us. It entered the water on the right and crossed a small island and then swam the river on the left. We were able to watch it for about 3 minutes. It was a very large black bear. The Go pro was out of battery by this point so I was only able to get  stills. This is the best one and that is not that good. 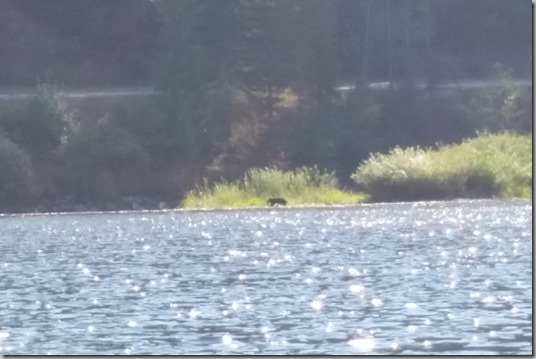 Once the bear was gone, Kim allowed me to paddle on down stream. We both looked cautiously as we passed this spot. I am sure the bear was long gone. That was very cool. We have since asked a number of other people including our camp host and none of them had seen a bear on the river.

This had already been an awesome trip and I still had not caught a fish. That soon changed. I found a good hole and I saw a fish feeding along the bank. I let my fly pass over that spot about 10 times before, BAM! He hit it and I was able to bring in a nice little cutthroat trout. I was one happy camper. I was able to get another one hit my fly a short time later. The cool thing is that I watched him for about 10 seconds before he rose up and took it. Unfortunately, I lost him before he made it to the boat. No fish pictures on this day, the one I caught was just not big enough to brag about, but I was off the schnied and all was right in the world.

On Sunday we got up and went back to St. Maries to go to church. We made a couple of other stops and made some phone calls. I really wanted to talk to our grandson and wish him a day late Happy Birthday, but we were unable to reach them. Happy Birthday Connor!We then got back to do some more fishing. I walked down the river a bit and had the place to myself. This was the scene from the river bank. 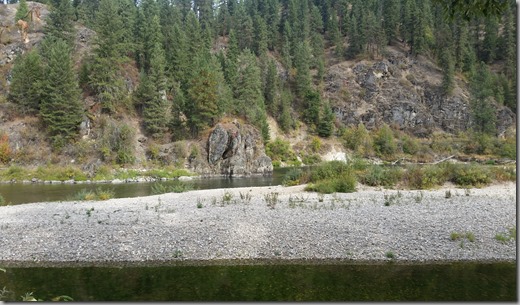 After fishing for a while, I saw what looked like a large fish feeding on the far side of the river. He was right over there by those logs. 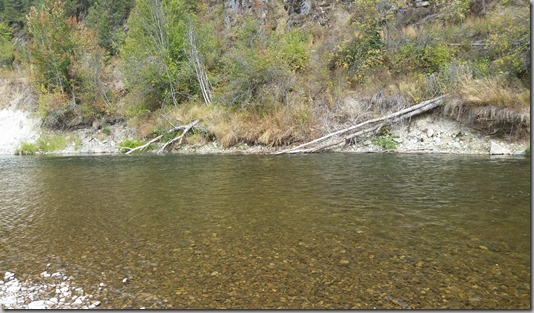 I waded out in waist deep water to get a fly right over his feeding spot. The wind had come up and it was difficult to control the fly. The fish kept feeding, but would not hit my fly. I swore I would not give up. After about 50 casts, he hit my fly. I played him for about 2 seconds and he snapped my tippet. It may have been frayed, but I could tell he was a brute.

I trimmed the tippet and tied on another of the same fly. I tried and tried. I knew he was still there because he kept feeding on other bugs floating on the top of the water. On about my 100th cast, BAM! he hit again and this time I had him. I wanted to get him in quickly, but he would have none of that. I fought him through 2 long runs where he took about 20 yards of line. I was being very careful, because I wanted this fish. I finally got him close enough to slip the net underneath him and I had my fish. 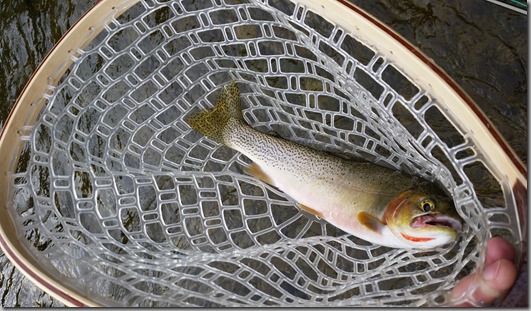 That is another cutthroat trout. It is catch and release only on this river for the native species, so I took a picture and quickly returned him to the water.

After releasing him, I looked at my fly, it was trashed and the tippet was frayed. When I pulled on it to test the strength, it broke. Wow, was I lucky to get this guy in. I thought about fishing some more, but I decided to go out on top and end this fishing adventure right there.

I returned to the trailer and got cleaned up and was fixing dinner when I looked outside to where Kim was sitting in her chair reading. Directly behind her about 10 feet was a large female wild turkey and about 8 chicks that were about 5 months old. Kim didn’t see them. I knocked on the window and got her attention. She turned around and just saw the female. She totally missed the rest.

So, there you have it. Our adventures in this awesome place and the drama of my rather limited fishing skills. It really was an amazing time. As I said in my previous post, this could be my favorite campsite of all time!

The next day would be time to move on. We are now heading into Montana. We have camped exactly twice in Idaho on this trip. The first being Calamity campground back on Memorial Day weekend and then Huckleberry Flats. Both were awesome and received the highest marks. We need to come back to Idaho and spend more time. We Love Idaho!

The trip to Montana was awesome and is a story all unto itself. Come back for my next entry and I will explain.

Posted by ktmissouri at 5:38 PM