I am finally caught back up on my blog. What I am writing about today just happened a day or two ago. We have moved on from Lyons Ferry into Idaho and I thought I would let family know that we have no cell signal at all. We are 30 miles from the closest town. We are camped right on a small river and the fish are biting. We are planning to stay for 5 nights, so it may be a while before I post again. I made this trip into town to get my fishing license and to stock up on groceries.

Now, back to Lyons Ferry. We arrived at Lyons ferry on September 7. We did not know what to expect, but I wanted to see Palouse Falls that is just a few miles away. We have been told by a number of folks that we met, “Do not miss Palouse Falls!”.

We are camped at a KOA, that is right on the Snake river at the confluence of the Snake and the Palouse rivers. The Snake is a very large river and is used for barge traffic from Lewiston, Idaho to our East to Portland along the Oregon coast. This is how they move much of the wheat from these miles and miles of wheat fields to get processed.

We don’t normally camp at KOA’s, because they are set up like an RV park, with rigs right next to each other and they have many amenities that we do not use. They are also normally expensive. This one is a bit different. They have close together sites, but it is mostly empty, so we have it to ourselves. There is a beautiful basalt cliff right in front of us and there is a nice marina to look at. At $31 per night with full hook ups it is not bad. 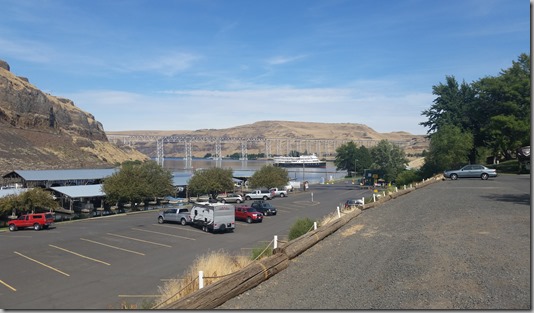 In the picture above you can see a cruise ship that cruises up the Columbia and Snake from Portland all the way to Idaho and back. It is a  day cruise. They go through 9 locks up and the same down. It sounds like a fun trip. Mom and Dad, maybe you would like to do that? Here is another shot of the ship I took later: 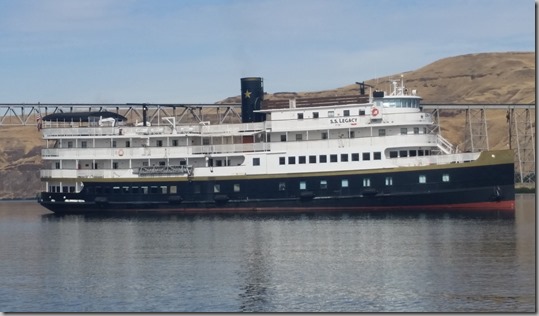 The ship was built in 1983 and was modeled after an old river steamer, but she is really a modern ship. They had laid anchor for the night at Lyons Ferry. I am not sure why. I met one of the ships officers and he answered a few questions I had. He told me the cost of the trip was about $1000 for two people in one cabin all inclusive.

On September 8, my parents 59th Wedding Anniversary, we headed out to see Palouse falls. We needed diesel and Kim wanted to mail a birthday card for a special grandson. Happy Birthday Connor and Happy Anniversary Mom and Dad! We drove about 7 miles to the thriving metropolis of Starbuck, Washington – Population 127. They had a post office and a gas station, so it worked. 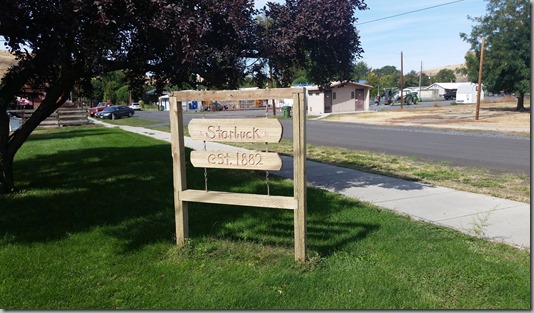 There was a line of Model T’s at the gas station. They were part of a club from California. 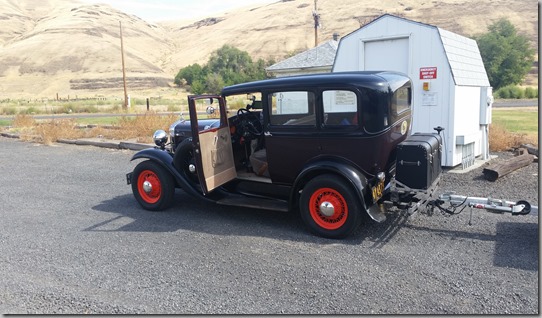 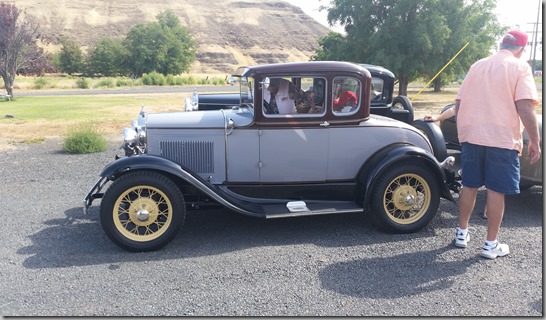 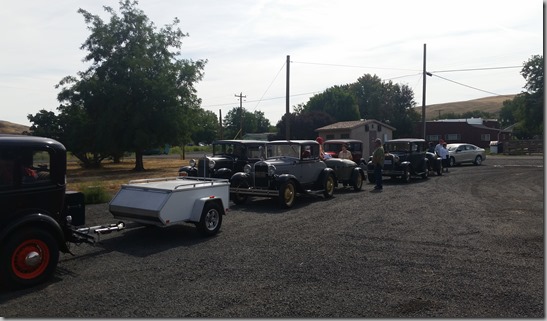 We then made the short drive to Palouse Falls. The water flow is down this time of year, but it is still very impressive. You can see some people fishing at the base of the falls to get the size perspective. The surrounding basalt cliffs were also very impressive. 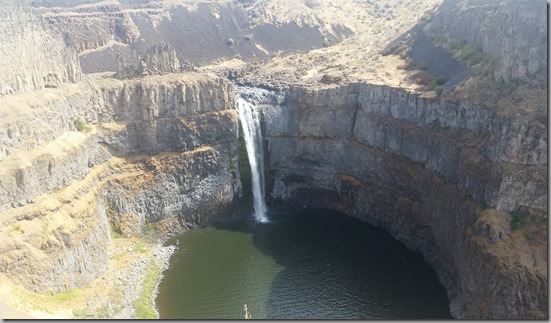 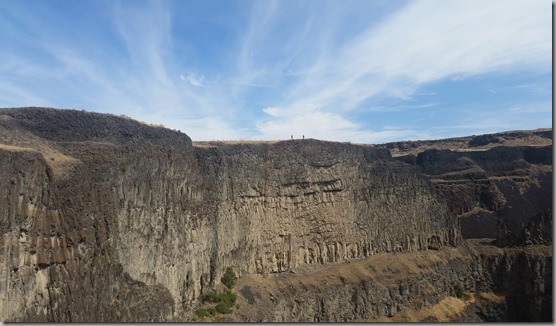 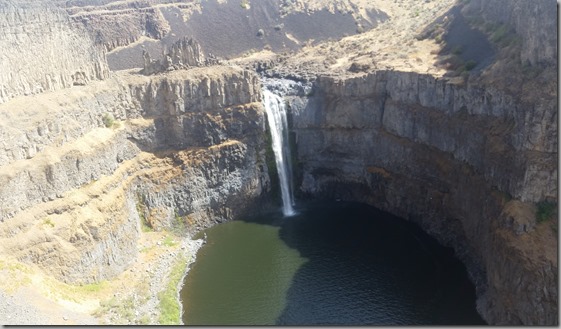 Check out the castle looking rocks just left of the falls. They were very interesting to look at. The formation of this area was severely altered about 13000 years ago at the end of the last ice age. You guessed it, this was part of the flooding that was caused by the ice dam failure at Lake Missoula.

We had already decided to take a paddle on this beautiful windless day. We got the boat set up and headed out. We paddled across the Snake river into the mouth of the Palouse. We went under the highway bridge. 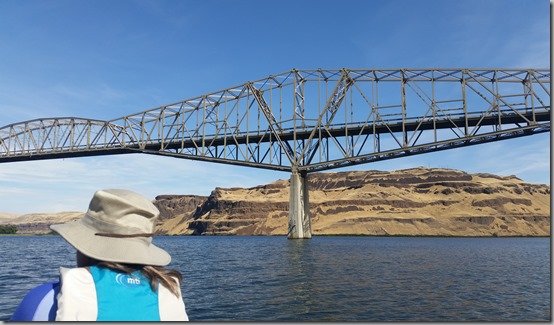 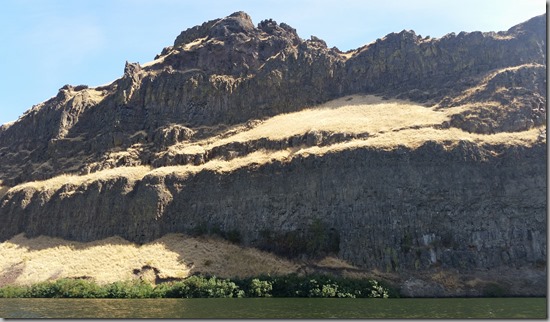 Once we got into the Palouse, we were surrounded by huge rock cliffs. We saw Osprey, Herons and other birds fishing in the calm water. 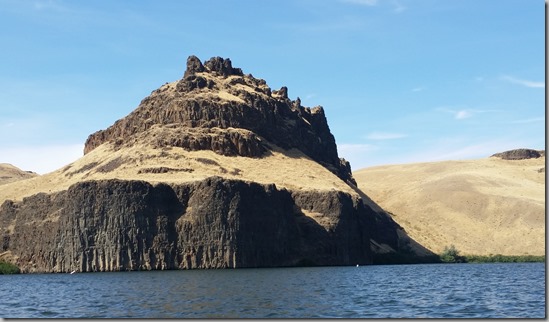 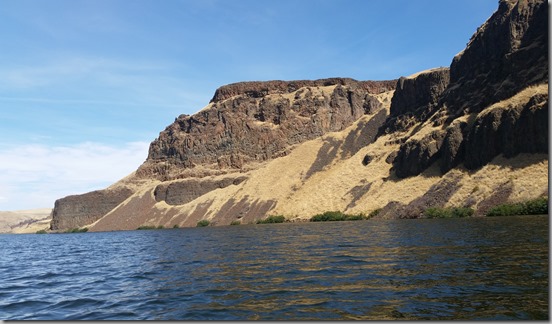 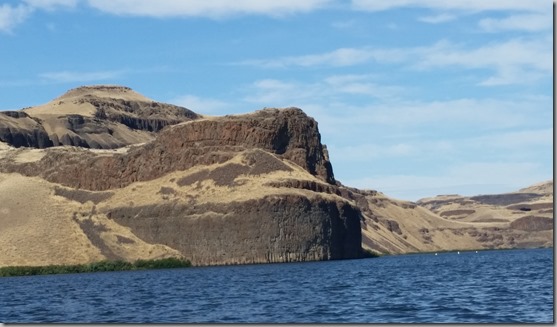 Here is the one shot I got of an Osprey. 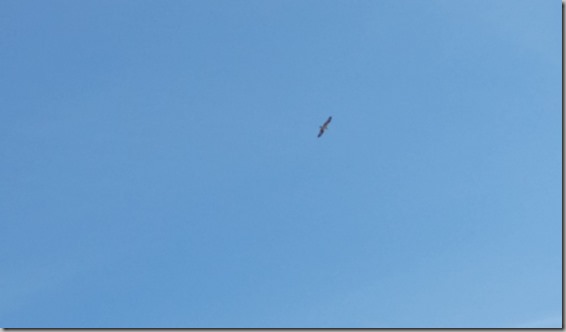 We decided to just eat our lunch in the boat. We are just too lazy to get out on shore. Kim turned her seat around and we had a picnic. 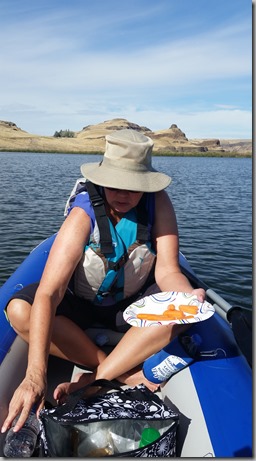 We paddled to the back of the State Park Lagoon and saw the wreck of the ferry that worked this crossing from 1929 to 1963. That was kind of cool to see. 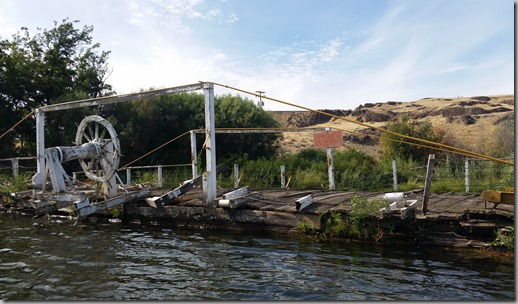 The wind had come up a bit and it was going to be a tough paddle back across the river. Kim asked it to stop and of course, it did. We took advantage of the lull and paddled back across. We wanted to paddle a bit longer so we went up to where the railroad bridge crosses the river. 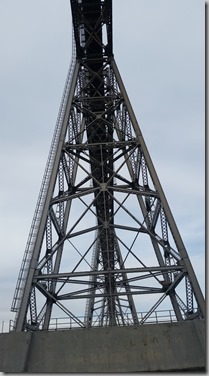 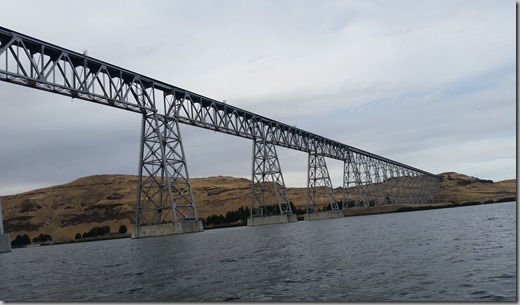 It was about then the wind came up a bit and we just floated back to the marina. It sure is nice paddling with a charmed person. We paddled around the marina looking at boats and then took the boat out. We were on the water about 5 hours. It was one of the best outings we have had in the boat. We really had a great time and even got a bit of a workout. The day ended with a nice sunset, but I missed the best of it. This is all I got: 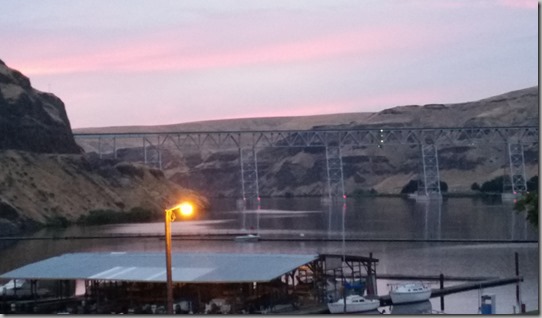 Lyons Ferry turned out to be close to a hidden gem. We really liked this place. We could have stayed for a few days longer, but it would have been really great to fish while we were there. Too bad Washington makes it so expensive for someone from out of state to drop a line in the water.

I also wanted to mention one other thing. We have been dealing with an issue with the trailer since we bought it. We have had a real hard time filling the fresh water tank. We have to go slow and it never gets completely filled. While we were in Kachess, I was trying a new idea. I had wrapped duct tape around the hose to the thickness of the opening. I was hoping to pressure fill the tank. It seemed to be better, but I shoved the hose in too far and it would not come out. Hmm, what do I do now? I decided to take off the outer hose and water fill plate on the side of the RV to see if I could get to it from the back side. The entire white part is held on by 8 screws: 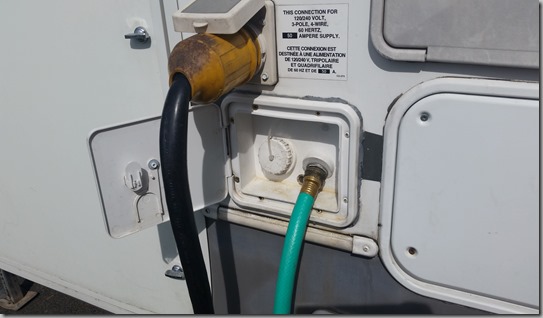 When I got it off, I also noticed that the vent tube from the tank was kinked. They had added a length of hose at the end and that part was too long and the hose had kinked not letting air out and not letting the tank to fill properly. 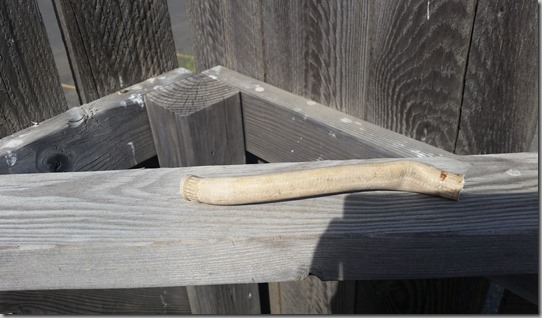 I replaced that section with a section of old garden hose I carry that will not kink. Now our tank fills properly! Yeah!! Kim helped with this project, we are a great team when we work together.

Why did I document this? Living in an RV is not all fun and paddling. You have to deal with problems and if you work well with your partner, you can solve many issues. It is very gratifying to fix the rig without the help of a professional.

It may be a few days until my next post. I am off to do some fishing. Geez, I hope Kim doesn’t out fish me again.