As most of the people that read this blog know, I am kind of into off-road motorcycle racing. The most well known of the different types of racing is Supercross. This is where the bikes and riders compete on a closed course with large jumps and other obsticles in a stadium. The biggest Professional Series is called the Monster Energy Supercross. They have a 16 race series held at some of the largest stadiums around the country. The teams race 16 out of 17 weeks each winter/spring. I love to go watch the best riders in the world competing in the comfort of football stadium. This year is especially interesting because of a number of reasons. I will not go into why because my readers that follow the sport know all about the major story lines and the ones that don't care, well, they don't care.

Let me say now, MOM, this is NOT the type of riding I do. I did an amateur form of this type of riding when I was young and more stupid than I am now, but now I ride on trails in the woods. 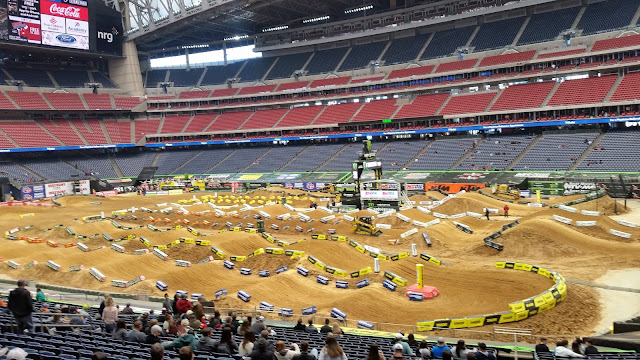 We left Hanks Creek Park on January 12 and drove the 90 miles south to Baytown, Texas. I had made reservations (yes, reservations) at Bayou Bend RV Resort. BB is a nice new park. It is a Passport America park and was $25 after the 50% discount. It left us 37 miles to the NRG Stadium on the south side of Houston. We were able to totally bypass the Houston traffic with the rig. I did not take any pictures of the park, but all the pads and roads were concrete and the entire place is not very old. The only problem is we were about 100 yards from I-10, making the road noise significant.

I was very excited when we got up on Saturday. Kim was...well, willing to go along. One thing I like about going to a race is that they have the pits open from 12 to 6 and they have qualifying going on at the same time. So, you can go check out the team haulers and even meet some of the riders and get autographs. Then, you can go watch the fast guys try to get the best qualifying times for best gate pick and the slower guys try to make the show. The top 40 make the night program in each of the two classes (450 and 250).

I tried to take a few shots of the guys riding the track, but you just can't do them justice without using video.

You can click on this link to get a video I shot track side during qualifying practice.

The race was good except my favorite rider got hurt in the first heat race and did not ride the main event. #21 - Jason Anderson riding a Husqvarna won the race on the 450's. #23 -Aaron Plessinger won the 250 race. I had a great time.

With this event crossed of the list, we were now heading east. Come back to see where we go next.
Posted by ktmissouri at 9:53 AM