We left Rainbow Plantation in Alabama on Wednesday, January 24. We were planning to only go about 90 miles to a remote State Forest campground in the far western panhandle of Florida. Once we got on I-10 I noticed that the truck was running poorly. It was missing and just did not sound right. We decided that it was time to get it to a shop. I was sure that there would be no shop near that campground, so we decided to drive a bit further and get close to Tallahassee. I knew I would have a better chance of finding a good diesel mechanic in the larger town. I had already done the research and knew that we would make the longer 180 mile drive on I-10 and turn north a few miles to Eastbank Campground on Lake Seminole.

We were able to get a great site at this COE park. We are right on the water and have an unobstructed view out our door side of the lake and Dam. The rate is $24 per night. We had weak Verizon, but it works and decent OTA TV.
I spent the evening looking at websites for local shops and selected two to call the next morning. I got up early (for me), and called the first shop. They were very nice, but told me to call Shiver Diesel. They told me they were the best shop in town. I called Shiver and they told me they could take a look at 1:30 that afternoon. I was happy to get the process started that quickly. Kim and I discussed the plan to take it in that day and then bring it back the following week to get it fixed. I was expecting that it was another injector problem. The shop in Pahrump, Nevada had replaced injectors #1,3,5,7 last March. We planned to go get a rent car and then take the truck in and leave it for hopefully less that 3 days.  I was guessing it was an injector on the other side of the engine and I would be shelling out another $2100.

When I arrived at Shiver Diesel, I was not impressed. It is an older shop with motor parts laying all over the place. When I walked in the door, I was immediately greeted by some very nice people. Jay checked with the mechanic and told me he would be right up to pick up the truck and take it back to his work area. As I sat in the waiting room I noticed that this was a busy shop with many locals coming in for a social call and to ask advice. Jay knew almost everybody. The advice was free and always appreciated. These guys know what they are doing when it comes to diesel pick up trucks. I decided then, this is where I wanted to get my truck fixed. 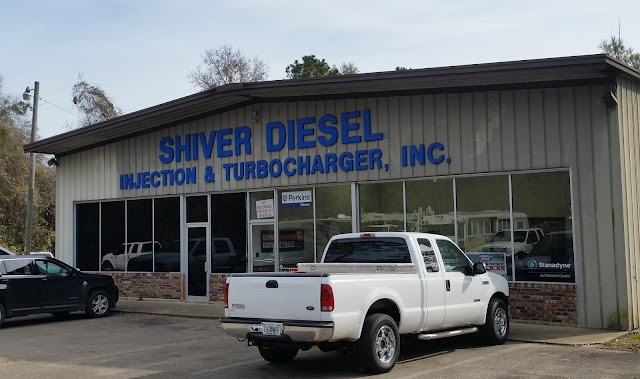 We were all surprised when the tech came back and told us the problem was injector #1. That injector had been replaced in Pahrump. The good news is that the shop in Pahrump uses the NAPA nationwide warranty. I called NAPA and they gave me the numbers of the local NAPA service centers. I called them and nobody would do the work or could get me in, but one shop told me to call the 800 number and see if Shiver could get paid to do the work. I called the 800 number and they were great. We were able to get it worked out to pay Shiver directly. My day was going well. Now, we just needed to see when they could work me in. Jay said, "come with me". We walked back to talk to Eric the Ford expert. He had two other trucks in his work area with engines that looked like the had exploded. He was doing major motor jobs on both of them. Jay explained that I was on the road and asked when he thought he could do the work. We were both shocked when Eric said, "how about right now." It was almost 3:00PM and he needed to be out of there by 5:00. I went back to the waiting room wondering if he could do it that fast. A couple of other guys showed up and it felt like Floyd's barber shop in Mayberry. The conversation went from fishing to hunting and everything else about trucks and boats. At about 4:30, Eric pulls up in my truck and says,"You are good to go!". Jay in the mean time had been working with NAPA to get paid. He looked at me and said you are set, we just got paid. So, I walked out of there with a truck that runs perfectly and it did not cost me a dime. How awesome is that??? I did buy the guys dinner, but that was just because I wanted to show my appreciation.

I drove the 40 miles back to the campground and the truck ran great. I could not wait to tell Kim the whole story. This was one of those really good days. And to finish it off, we had a very nice sunset. 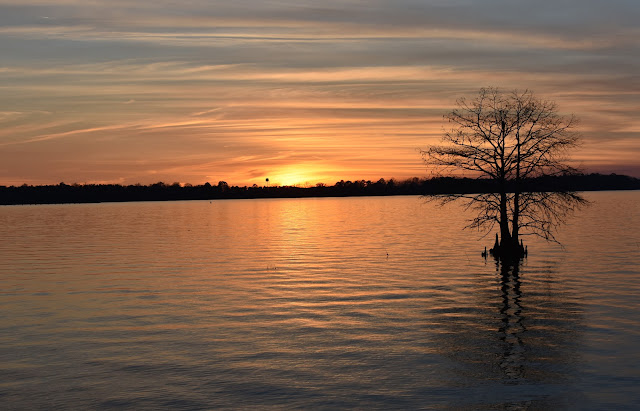 The weather was going to get sunny and warm for the next few days, so we did some sight seeing and nature photography. Come back to see what we were able to find.

Posted by ktmissouri at 8:20 AM