Good News/Bad News and some Flowers

I am writing this on April 11. It is about 6:30 AM. I rarely get up this early, but this is two days in a row. I had to get up yesterday to get my trailer in for the repair of the cracks in the frame. Kim and I got up and got the last minute things done and pulled out. On the way to the shop, the truck started to idle strange. I made it fine and dropped it off. We then went to breakfast and while I was sitting in the restaurant, I saw an auto repair shop across the street. I felt like that was an omen and I went over and scheduled an appointment for today to have it diagnosed. Kim also noticed a Firestone dealer in town as we were driving through. I went there to see if they could replace a tire on the trailer. While I was underneath looking at the frame cracks, I was lucky and saw a chunk about the size of a quarter was ripped out of one of my tires. I wonder how long that had been like that? They can order the tire I want.

We went to Ash Meadow National Wildlife Refuge to kill some time while we waited to hear about the trailer. I was sitting in our Kayak on a beautiful lake in the refuge and made a phone call to check on the trailer. He was making good progress and felt he could have it done by 4PM. I then called the tire store and had them order the tire.

We went to RPI (Rod Paulson Inc.) to pick up the trailer at about 3PM. The repairs look great! He even did an adjustment on my pin box I had asked him about. If you ever have a problem in Pahrump, RPI is the place to go. I will take some pictures and put them in a later post.

I did a bunch of research on the truck last night and I think I know what is wrong. We will see if the shop agrees and then see if they can fix it. I will also drop the tire off to be replaced. Kim tells me that things happen in three's, so I hope this is it. OK, enough about that now back to the blog.

I was sitting in the trailer drinking coffee at Jawbone Canyon on March 27, when my phone rang. It was a call from our son Scott. He told me he had just crossed the border into California. He wanted to know where we were. He was with a buddy of his on their way to Northern California to move his mother back to Missouri. Scott was just along to help. I looked at a map and he was going to travel within 18 miles of our location. He was not sure he could stop. A couple of hours later a truck pulled up next to our rig and we were surprised to see Scott and his buddy step out.

We had a nice conversation and Kim fixed them lunch. They only stayed about an hour, but it was sure good seeing him.

On March 27, the wind had died down, so we decided to do some touring around the area. I had read in another blog about a Poppy Reserve about 40 miles away. I had seen pictures and it looked like something Kim would like. We made the drive, but when we got to the entrance of the Reserve, it was jammed with cars. We could see plenty of poppys along the road, so we just stopped and went to take a few pictures. 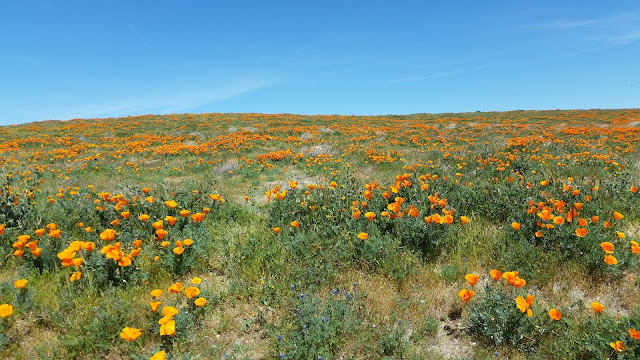 We were careful not to step on the flowers. It was really very beautiful. 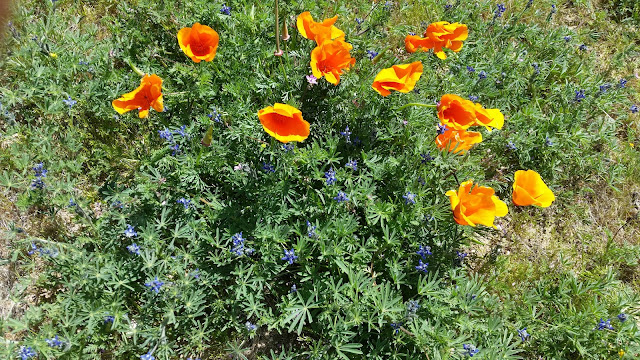 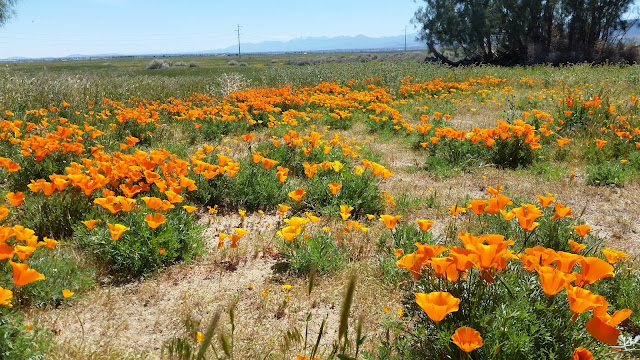 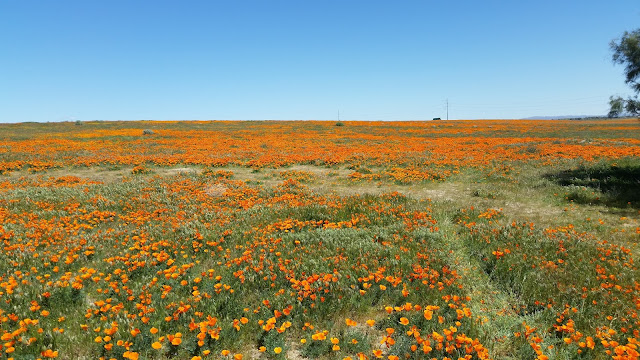 After seeing the pretty flowers, we decided to head back out into the dessert. I had also heard about Red Rock Canyon SP. It was only about 5 miles from our camp in Jawbone Canyon. The formations in the park are very interesting. They are made of what looks like mud, but is actually sandstone that is not highly compacted like what we saw in the Moab, Utah area. 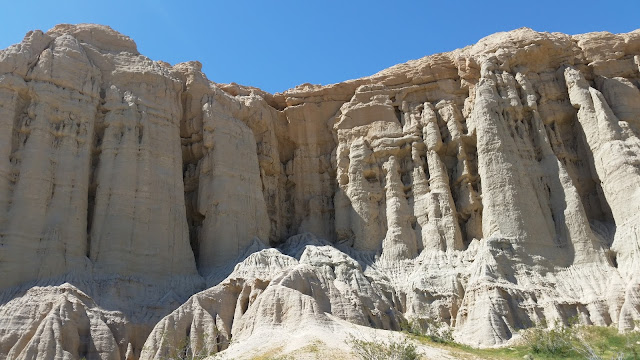 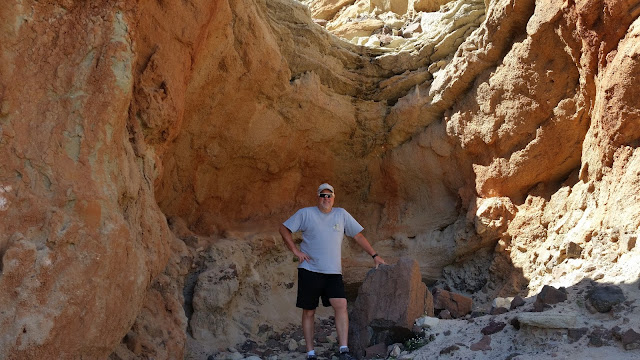 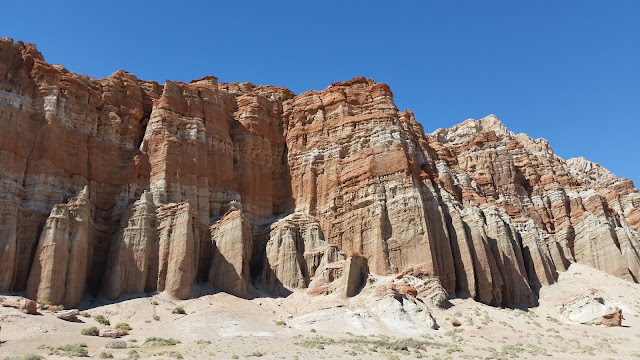 We only did a couple of short walks while we were in the State Park. It is a very interesting area and worth a look.

We went back to our camp and got the rig ready to move. We were heading to Death Valley National Park the next day. The trip was eventful and the next few days were very noteworthy. I will write all about it in my next entries.
Posted by ktmissouri at 7:21 AM