Update on the Truck and Death Valley National Park

I am writing this on April 12. They say that a country boy's worst days are when his dog dies and his truck won't run. I am not sure I qualify as a country boy, but I am one at heart. Yesterday, I took my truck in to a local shop. I was not sure what to expect. I did a bunch of research on what could be wrong with the truck and educated myself enough to hopefully protect us from getting ripped off. The good news is that the shop seems to be very knowledgeable on the Ford 6.0 diesel and went through a complete diagnostic before determining what was wrong. It turns out that I have the #5 injector out. It will cost about $900 to replace it. He gave me the option to replace all of the injectors on that side of the engine while he had it apart. That makes the price $1750.

I did some research when I got back to the rig and determined that was the best plan if we are going to keep the truck. It has 185K miles and 200K seems to be the life of an injector. Hopefully that will prove to be a good decision. The bad news I still have 4 injectors on the other side that could be a problem in the not so distant future.

I did drop off the tire from the trailer that had a chunk taken out of it at the tire store. I will borrow my friends car this morning to go pick it up and put it back on the trailer.

We are very lucky that this all happened here in Pahrump. Our friends here were very helpful in picking me up and bringing me back to the park. We are in a full hookup site that is very inexpensive in a great little community. I will write more about this place in coming entries.

The truck won't be ready until Thursday or Friday, so we will just stay here through the Easter weekend. We still have plenty of time to get to Texas for the wedding on May 13.

I promised a picture of the Trailer frame repair, so here it is. You can see the plate they welded on the outside of the frame. He also dropped the chloroplast belly of the trailer and welded the inside. He then welded up the other smaller cracks. This all cost a little over $800. 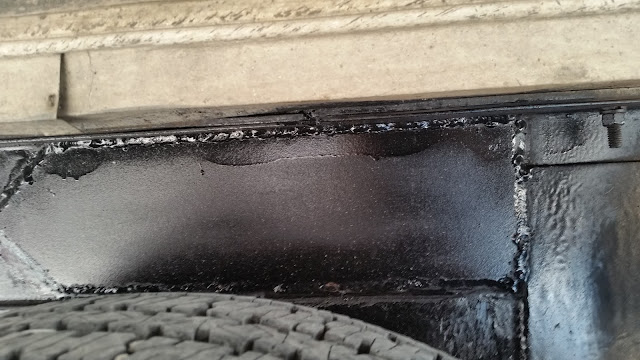 We left Jawbone Canyon on March 27. The wind had finally gone away and it was a beautiful sunny day. I had to take a walk around and take a few pictures before we pulled out of this memorable site. 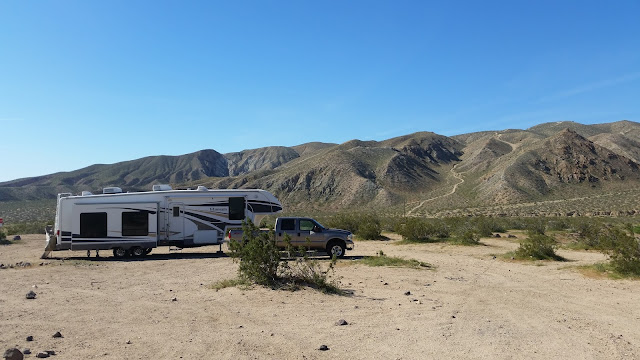 As we drove along a very uninhabited area of the desert I noticed the truck seemed to be down on power. Not a huge amount, but noticeable to me. I even stopped at one point to see if it was windy, but just chalked it up to going up a gradual uphill. I hate to think what would have happened if the truck had died there. The flowers were beautiful in this area. 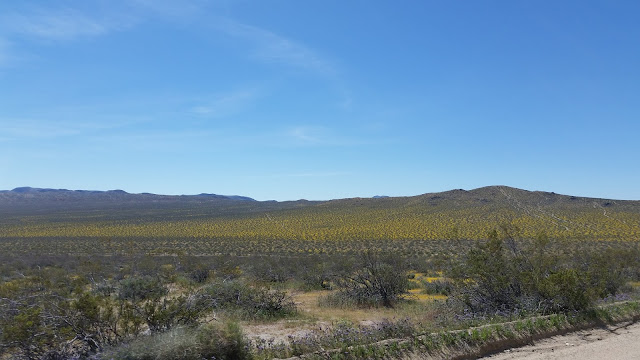 There were a number of places to camp for free out here on BLM land and ORV trails that went on for ever.

We stopped for fuel in Trona and then drove to the boundry of Death Valley National Park. The NP is not just a valley. It is a deep valley that is the hottest and driest place in North America surrounded by beautiful mountains with amazing canyons. There are also a number of springs in the valley that are small oasis for both the animals and man. This area is the home of the Timbisha Shoshone. There is only about 35 tribal members still living in the area. They fought and won the land designation in the 1980's. They are the only tribe in North America that was given land in the area of their original settlement. Most tribes were moved off of their valuable land because the European settlers thought it was their destiny to take it. 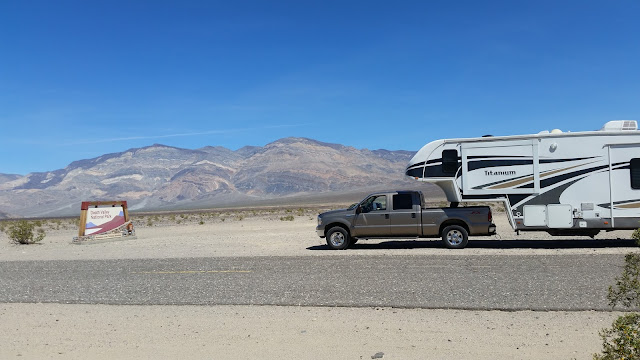 My mother recently wrote to me and told me that she has confirmed that a small part of my blood is Cherokee. That makes the plight of the native Americans a bit more personal.

We then had to climb the Penamint Mountains. The truck struggled a bit, but it was very steep. It was also very beautiful. 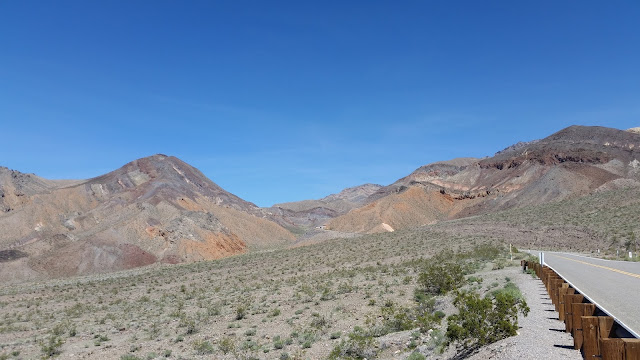 We stopped at a pullout to let some traffic pass. From there we could see the high Sierras in the distance. 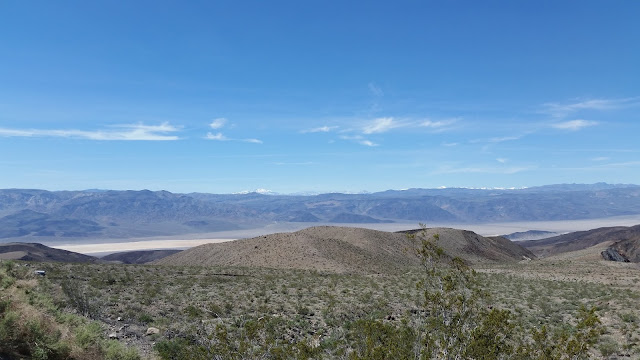 After climbing to the top, we were well over 4000 feet in elevation. We then had to come down to sea level at our selected campsite at Stovepipe Wells. 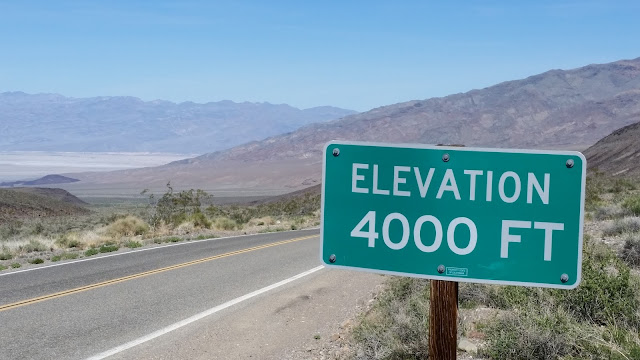 We had to stop about half way down to let the brakes cool. No big deal, we just ate lunch.

Stovepipe Wells has a small campground with hookups that is normally full and takes reservations. There is also a very large gravel parking area that has no hookups and does not take reservations. We were there in prime spring break season and it was about 1/4th full. 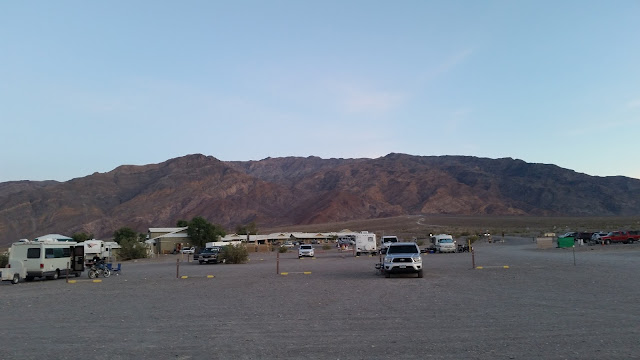 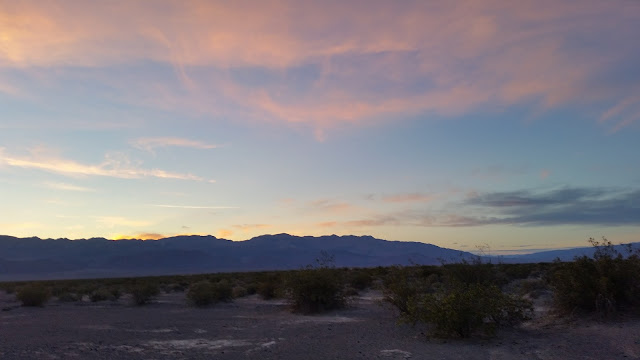 It is a beautiful spot surrounded by mountains. It had the vibe of the pits at an off road event. There were dual sport riders everywhere. I spent that first evening walking around and talking bikes with a number of the guys. My kind of place.

The forecast was for a bad wind event the next day. When we awoke we were a bit surprised to see no wind at all. We then heard it would come about noon. We decided to take a short trip to the neighboring sand dunes. It was getting warm, so Kim decided to leave a couple windows open in the trailer.

The sand dunes were really interesting, but we just walked around for a while. Kim did have to take off her shoes. You just can't get that beach out of the Galveston girl. 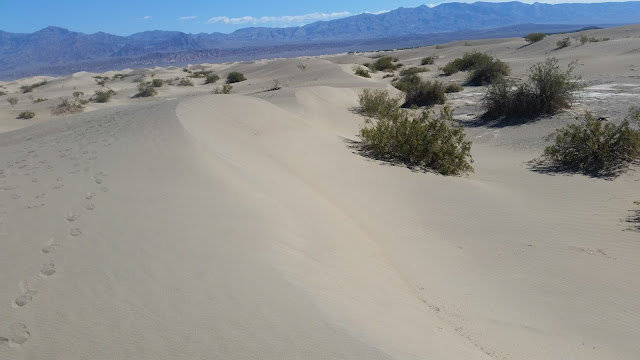 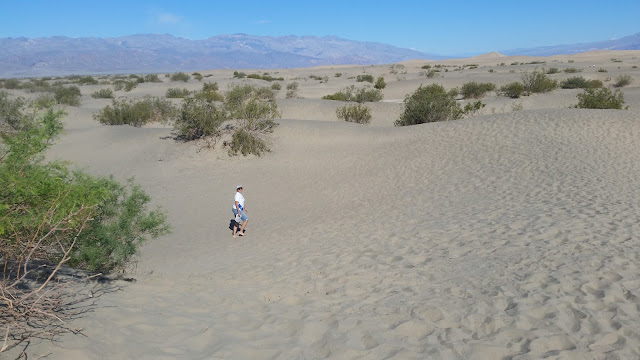 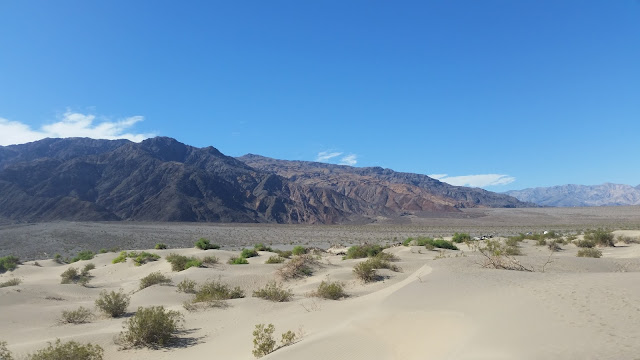 There was still no wind, so we decided to take a short hike up in Mosaic Canyon. It is just a few miles up a dirt road right across from the campground. When we arrived at the parking area we noted it was a 2 mile trail to the upper dry waterfall. We were not going to go the entire way, we thought, so we just grabbed our water bottles and headed out. There were a number of other people on the trail, but the further we went the fewer people we saw. 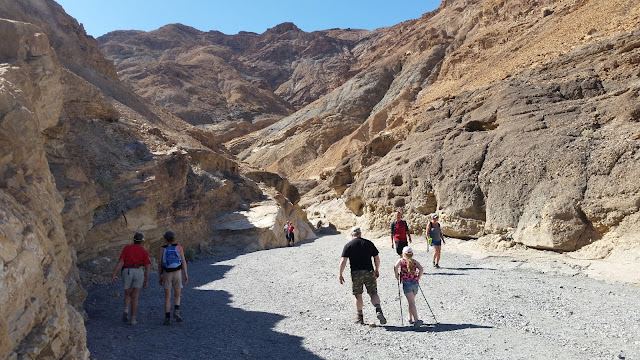 The trail is fairly constantly uphill, which Kim does not like. I was ready for a workout, so Kim sent me on and told me she would see me on my return trip. 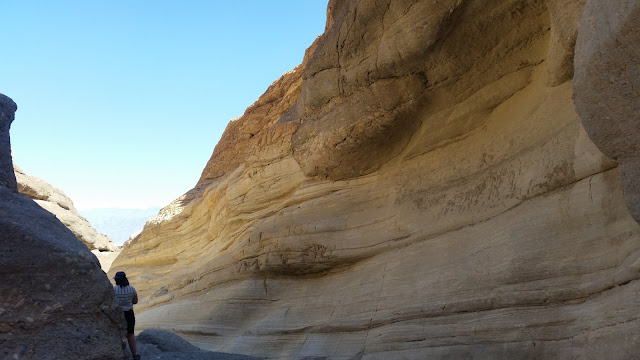 The rock formations on both side of the canyon were interesting and beautiful. After a ways I came to a dry waterfall that required some scrambling to get up. I decided to wait for Kim and see if she wanted to go on. She did and we then decided to hike together to help each other if needed.

The trail was interesting, so we kept saying "Just a bit further".

When we got to the end we started to feel a bit of wind. Not bad, but we knew we needed to get back to camp. The trip back was much easier and faster. 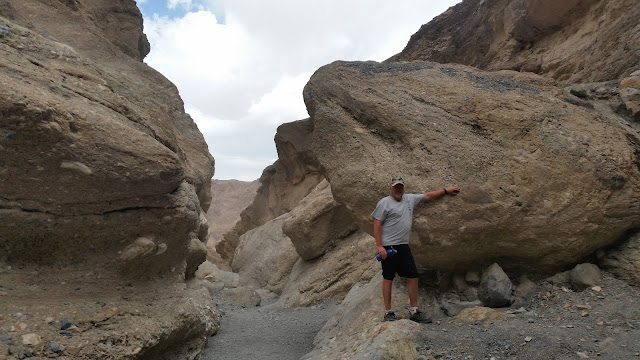 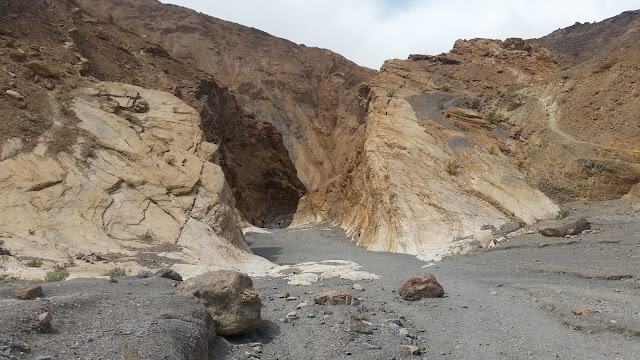 When we exited the canyon we looked down and saw the campground was shrouded in a blowing sand storm. We hurried back to the rig hoping that not too much came in through the open windows. When we got back it was much worse than we thought. Kim got over 12 ounces of dirt off of the floor alone. 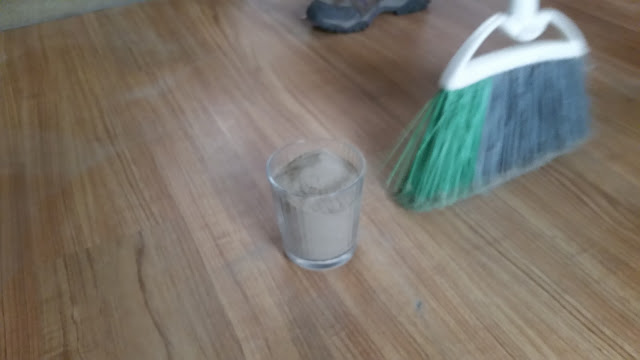 The view outside was unreal. 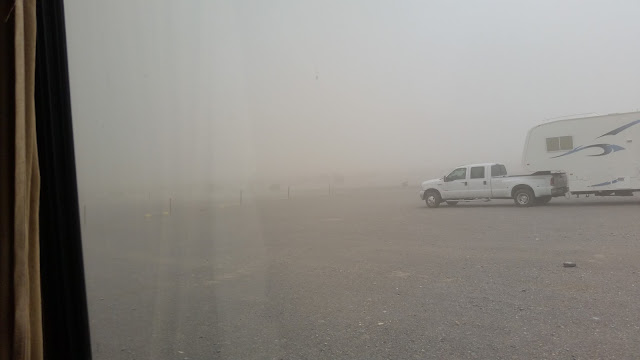 There is Scott and Donna's rig, our new friends from Petaluma, California. The dust was everywhere. We are still cleaning the rig and the dust just keeps coming back. I am sure we will bring some back to Missouri.

Well, we learned a valuable lesson on that day. Always keep your windows closed in the dessert. They ended up closing the road for a few hours because of zero visibility. It was a crazy day. I had the rig pointed into the wind, so we did not get rocked too bad.

That is enough for this entry. I will write more about our adventures in Death Valley NP in my next entry. It is an amazing and wonderful place.
Posted by ktmissouri at 10:34 AM