I am writing this on April 20. We are still in Winslow, Arizona.

Now back a couple of weeks to the continuing saga of our time in Pahrump.

The first week went by quickly. We were just waiting to take the trailer in to have the frame welded. I did crawl under the trailer and marked all of the problem areas with white chalk as Sam had asked me to do. While I was under there, I noticed a chuck of rubber missing from one of the trailer tires. It was about the size of a quarter and went all the way to the core of the tire. It is just luck it had not blown.

We got up very early for us on Monday, April 10. We even set an Alarm! We could not remember the last time we did that. We had hooked up the night before and pulled out of the park around 7 AM. I am sure our neighbors were not pleased.

As we drove to the repair shop, I noticed that the truck was idling roughly. My day just went from bad to worse. I drove on and made it to the shop. Sam was waiting for us and had a plan to get us taken care of. He was hoping to have it done that same day, but it may be the next.

We went to a Denny's in town for breakfast. Kim had noticed a Firestone tire sign at a local tire shop on our way to the shop. I wanted to see if they could get a replacement tire for me. We were sitting there discussing what to do about the truck, when I noticed a sign over Kim's left shoulder. It said, "Pete's Auto Clinic". I decided to go talk to them to see if they knew anything about Ford diesels.

The tire store was a bit disorganized, but the guy told me he could get the tire I wanted and shot me a great price. I then went to Pete's. I talked to the GM of the shop and he was very knowledgeable and offered an appointment for a diagnostic the next morning. I scheduled that.

The truck seemed to be running better, so we decided to drive out to Ash Meadows National Wildlife Refuge while we waited for the trailer. 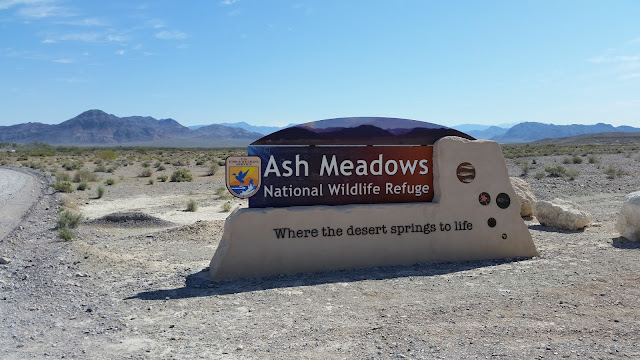 The refuge is a very interesting place. It is like an oasis in the desert of Death Valley. There are a number of high volume springs in the refuge and plenty of wildlife. We decided to take the boat out for a paddle. 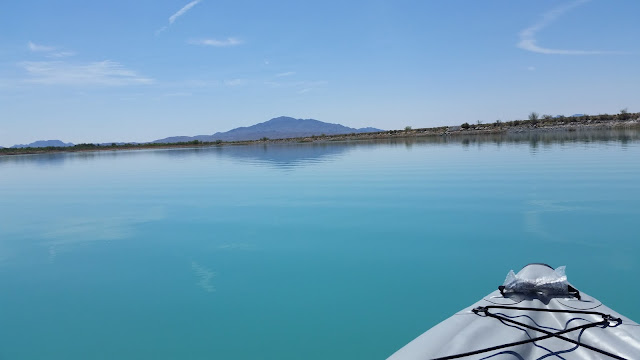 It was a beautiful day and the water was an amazing turquoise color. 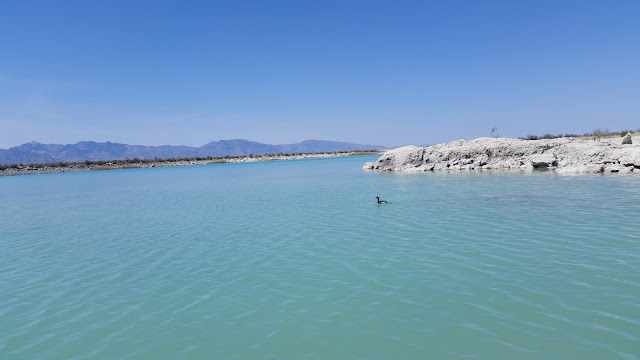 Light winds made the paddle all the way around the lake very enjoyable. The mountains surrounding the lake made for some very nice views. 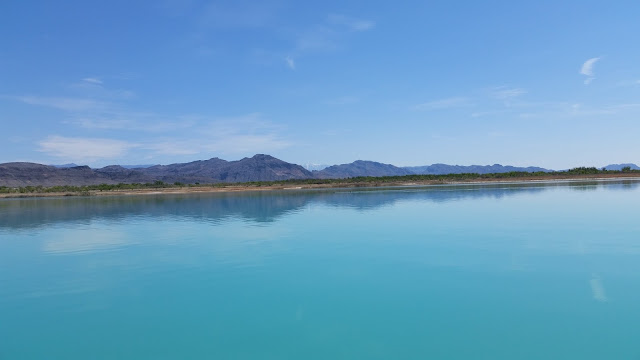 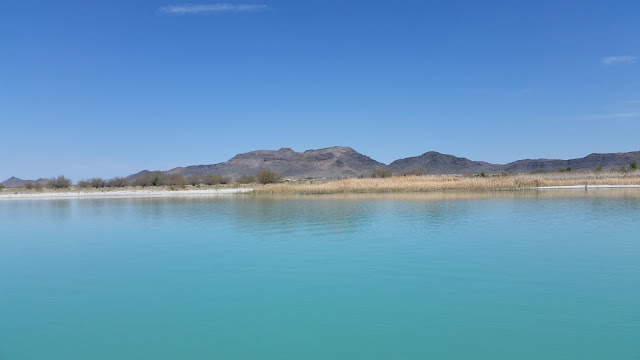 We saw a number of species of ducks and other water fowl. You may not be able to pick it out, but there is a Belted Kingfisher up on the top of that reed. 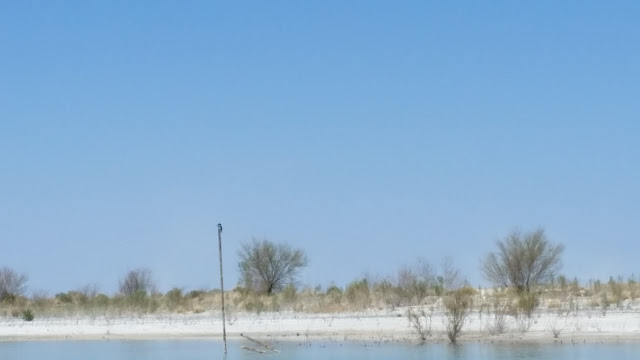 While we were paddling around the lake, I called Sam and he told me that he was half done and hoped to be done by around 3:30. Great News! I then called the tire shop and ordered the tire.

We then went to the visitor center. It is fairly new and is beautiful. We watched a nice movie and then went for a walk on the boardwalk out to see one of the springs and the famous pupfish. 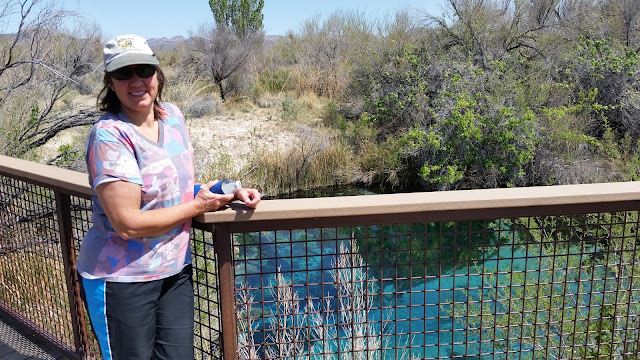 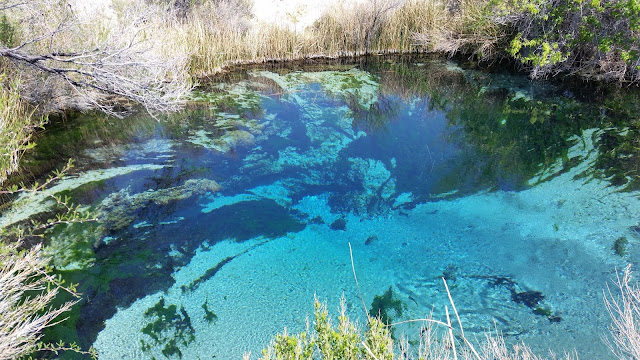 If you look closely, you can see the blue iridescent pupfish in this next shot. 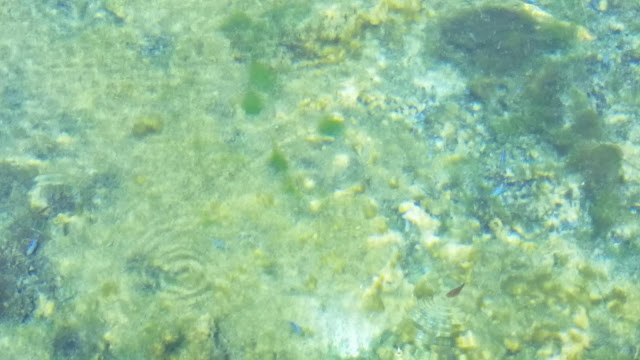 We then drove to Point of Rocks to see another spring and to take in some nice views of the surrounding mountains. 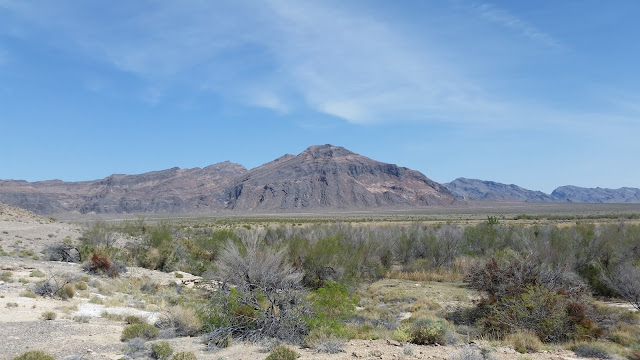 As we left the refuge, the reality of our day got worse. The truck let out a big cloud of black smoke. It was still running OK, so I took it easy and drove back to Pahrump. We stopped at RPI and Sam looked a bit worn out. He had worked hard on the trailer all day and had us ready to go. He did all of the welding, but also adjusted my pin box to help me tow perfectly level. It all looked great. I paid my $800 bill and then carefully eased the rig back to the SKP park.

The trailer was still very dirty from our time in the Death Valley dust storm, so we went to the wash area and did a quick clean. What a nice facility. I then got it parked in the site and took off the bad tire and put it in the bed of the truck. I was very concerned about how the truck was running.

I was up early the next day to drop the tire off and have the truck diagnosed. When I arrived at the tire shop the guy admitted he forgot to order the tire. I said, no problem, just get it ordered and I will call you when I can pick it up.

They were ready for me at Pete's and got right on it. I was sitting in the waiting room at Pete's waiting for a word, then something beautiful happened. There was a little girl about 2 sitting with her mother. The little girl was at first shy, but then came right over to me and offered me some of her drawings. He mother looked at me with a shocked look on her face. She told me that she never does that and asked if I had done something. I said no. They left, but not before the little girl had to say goodbye and gave me a drawing. Then a grandmother and her granddaughter came in. The little girl was about 3. There were about 10 seats in the waiting area and the little girl could have chosen any of them. She came right over and sat next to me and then leaned over on my arm. Her grandmother also gave me a strange look and said she never does that. We had a nice conversation. The little girl never said a word to me, but I was enjoying the snuggles. I have been missing my grand kids lately and those incidents really made my otherwise bad day, great.

I got the word that the problem with the truck was #5 injector was bad. That was going to cost about $900 to replace. The suggestion was made to have all of the injectors replaced on that side of the engine. I called Kim to discuss our options. We decided to go ahead and do the entire side. We thought about doing the other side also, but there was no cost savings to doing that. They told me it would be ready by Friday. My friends, Gordon and Laura stopped by to pick me up.

I called the tire place and they were not done getting the tire put on the rim. Gordon and Laura offered to let me borrow their car to go get it the next morning. Once again, their generosity was amazing and saved me a bunch of problems. The shop took forever to find the tire. Then they charged me more than the original estimate. I tried to argue, but felt my blood pressure rising and decided to just pay the bill and leave. That shop was just a mess!

I was shocked late Wednesday when I received a phone call from Pete's, telling me my truck was done. They even offered to bring it to me, so that I could drive it before I payed for it. It was running great! I paid my $2100 bill and then went and thanked the guy that worked on the truck. It was an excellent experience at Pete's and I would recommend them.

I got the tire installed and we were now ready to roll. The only problem was that we had paid for another week and Easter was that weekend. We decided to stay until Monday.

We went to church for Easter at a very interesting little mission church out in the desert south of Pahrump called Mission of St. Terese. Mass was 2.5 hours long, but we really enjoyed it.

We finished our time in Pahrump playing games with Gordon and Laura. They taught us two new games and even let Kim win a few times. They even gave us this fun game called Pegs and Jokers. 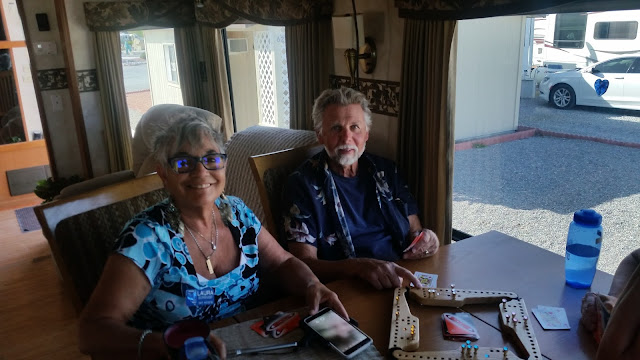 It is truly our belief that things happen for a reason. The reason we needed to come to Pahrump was to spend some more time with Gordon and Laura and let them help us some more. Gordon is more my hero now than he was before. Maybe some day, I will learn to be more like him. Thank you guys, we LOVE you!

I will finish this entry with a sunset. It just seems fitting. 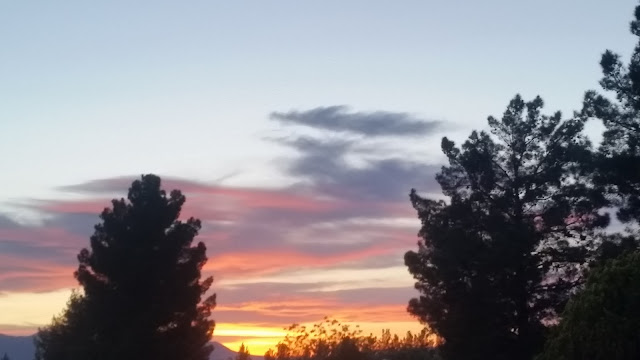 Next up is Northern Arizona and our move back east. We heard they have a big ditch there. Come back to see if we could find it.
Posted by ktmissouri at 3:38 PM