I am writing this entry on April 19 from Winslow, Arizona. And yes, we are "Taking it Easy".

I know that it can be confusing having two different time lines in play as I write this blog, but it helps to keep friends and family up to date and also keep the chronological history of our travels intact.

Let's go back a couple of weeks to Sunday, April 2. We awoke at Stovepipe Wells in Death Valley NP. It was a beautiful day. We had talked to the camp host, Randy, who lived in Pahrump. He really went above and beyond to help us by giving us the names of the best repair shops in Pahrump. We got going early and drove through the park to Furnace Creek. I stopped and checked the cracks in the trailers frame and they did not seem to be getting worse. We continued on up a steep and long hill leaving the valley. The truck did ok, so I was not concerned about it. The drive was only 85 miles. I was very happy when we pulled into Lakeside Casino and RV park in Pahrump, Nevada. This is a nice park that is a Passport America park. We were able to stay for 3 days for a little over $19 per night. It was Sunday, so there was not much I could do that day. This is the first time we have spent a night camping in Nevada.

We had been planning to stay in Pahrump for a few days before I discovered the problems with the trailer. We have some people we know that live there and we wanted to see them. We talked on the phone and made plans to see them the next day.

On Monday, I made some calls and decided to take the trailer to RPI, inc. to get the trailer fixed. I worked with a guy named Sam. I liked him from the first time I talked to him. He seemed to be hard working and a straight shooter. I hitched up and took the trailer to his shop. He looked it over and said it looked like a pretty big job. He estimated the cost at under $2000. I swallowed hard and made an appointment for the next Monday to bring it back. Now, we needed a place to stay for the rest of the week.

After getting the trailer set back up in our site at Lakeside, we went over to see Gordon and Laura. They are staying at an Escapee park called Pair-A-Dice on the southern side of the city.

Let me put this in perspective. We had only met them once. We were at St. Bernard State Park near New Orleans in 2014, just a month after I retired. They came in the park just behind us and parked a couple of sites down from us. We said hi a few times and then one day I stopped to talk. They had been full timers for 19 years at that point. I immediately started learning things from them. I loved their style and laid back attitude. They became my heroes. I wanted to be just like them.

We were getting ready to leave and I had Kim join me to say good bye. They invited us in and we sat and talked for over 2 hours. Kim and I have talked about them from time to time during the last 3+ years. We used them to help us when things were difficult. 19 years!, we could surely do 1! then 2, then 3.

Laura rarely posts in her blog, but she made an entry in December telling of their decision to sell the motor home and buy a park model and put it on their site in Pahrump. Unfortunately, Gordon has a disease that is impacting his ability to walk, but in his usual style, he still has an amazing attitude and is a joy to be around. I left a note in her blog and hoped she would get back to me. She did, and we exchanged contact information.

We started by going to the office and getting the information on becoming Escapees (SKP) and staying at the park. We quickly decided we would give it a try. We then went to see Gordon and Laura. We talked for hours and loved them more this time around. I don't know what time it was when we left, but I am sure it was a long time. We told them we were moving to their park and would let them know when we were set up. When we called, we were invited over for dessert and to meet a number of other folks that were in the park. What a fun evening. Almost everyone we met had been full timing for close to 20 years, some more. The advice and input was non-stop and much appreciated.

We now were comfortable enough to join in the festivities of the "Spring Fling", that was scheduled for Friday and Saturday. More fun times and enjoyable conversations with people from the park.

Here is a shot of our site in Pair-A-Dice: 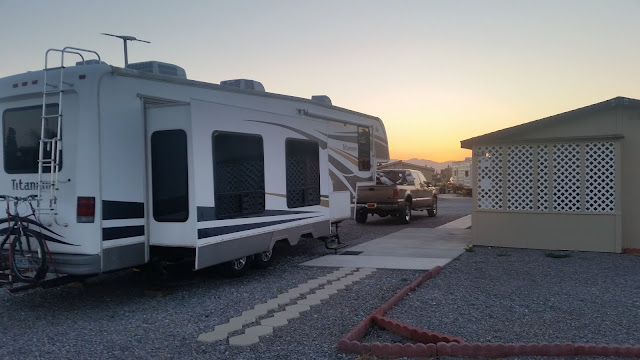 Gordon and Laura took us for tours around the area and helped us when we needed help. We quickly became great friends.

They took us to see the town of Shoshone, where we saw a number of interesting things.

We saw some houses that were cut out of limestone cliffs. This is how some miners stayed cool out in the desert back in the 1920's. 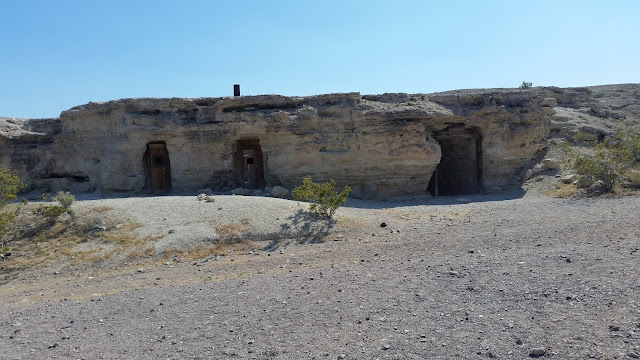 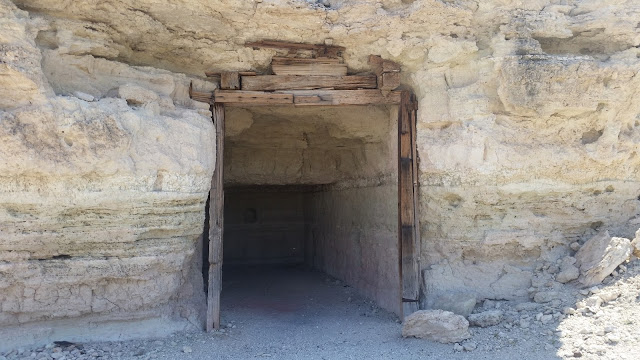 We then went to a Date farm and had Date shakes that were awesome! 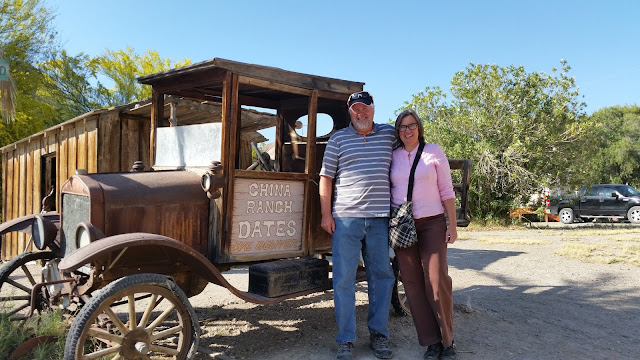 We loved the drive though this beautiful area. 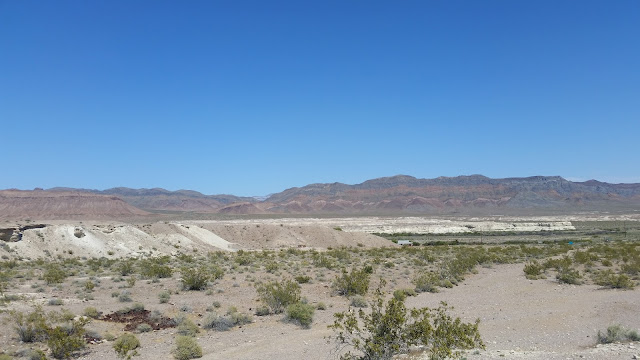 This entry is getting too long. If you have made it this far, thank you. I will pick up this story from the start of our second week in Pahrump. It was a crazy week, but our friends made it so much easier than it could have been.