We left Williams, Arizona on April 19 and drove along I-40 through Flagstaff and on to Winslow. We had been watching the weather carefully and April 19 promised no wind and sunny skies. The surroundings changed drastically in a little over 100 miles. We had a pine forest until we left Flagstaff and then it turned to high dessert almost completely without trees.

Most of our generation knows that Winslow is known for being included in the song by the Eagles, called “Take it Easy”. I have always loved the Eagles music, so we just had to stop.

There is a visitor center on the right side of the road if you are coming in from the west, just as you get into town on Business 40 (Also part of the original Route 66). There is a large gravel parking lot to park the rig. We talked to a guy named Bob Hall (same name as my brother) in the visitor center. He was very helpful. We walked the city park that ran along next to the railroad tracks for 5 blocks until we turned left and came to the famous corner park. You can see many old buildings in town dating back about 150 years. There has been settlements in this area along the little Colorado river since the 1300's.

Here are a few shots in Winslow: 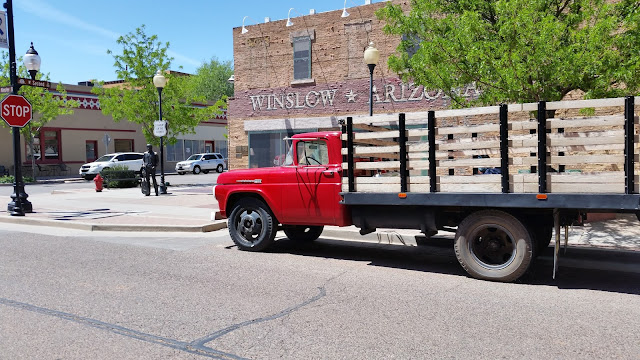 "I was standing on a corner in Winslow, Arizona, such a fine sight to see.
There's a girl my lord in a flatbed Ford slowing down to take a look at me."

This statue was installed in 2016, just a few months after he passed away. 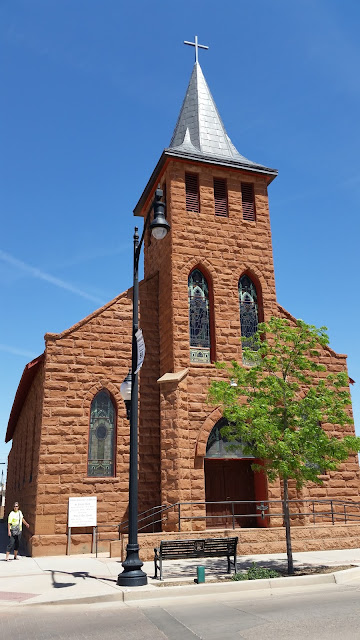 After our enjoyable walk around town, we headed over to the Homolovi State Park. We had heard good things about this park from Jim and Barb's Blog jim and barbs rv adventure . This is a nice little park that is just far enough off of the interstate to be quiet and $25 for water and electric makes it work fine. We got a good Verizon signal and they have a dump station. We even got OTA TV.

We went to the visitor center and read all about the park. The Homolovi ruins are here. They are what is left of a settlement of the Hisat'sinom people that lived here from 1250 to late 1300's. The area is prone to flooding from the little Colorado river. It is thought that the flooding and drought caused these people to move back to the Hopi pueblo about 60 miles north after they abandoned the area.

The area was also inhabited and then abandoned by some Mormon pioneers in the late 19th century. There is a cemetery on the park grounds from the Mormons.

There are two main ruins, Homolovi 1 and 2. On April 20, we toured Homolovi #2. It is the larger of the two and has a few extra features. The first thing we noticed was the amazing amount of pottery shards on the ground. There were everywhere. 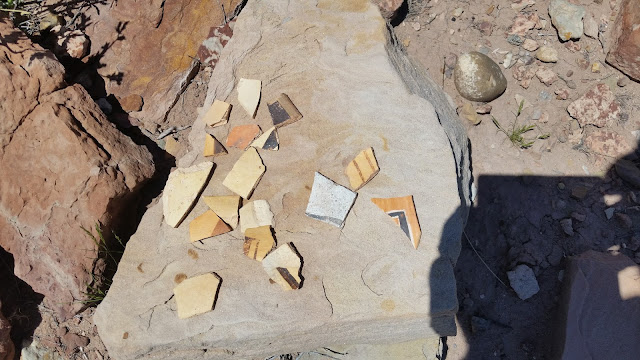 People have picked them up and placed them on rocks to make them easy to see. It is amazing to think these have survived over 500 years.

The ruins have been excavated and some rebuilt. 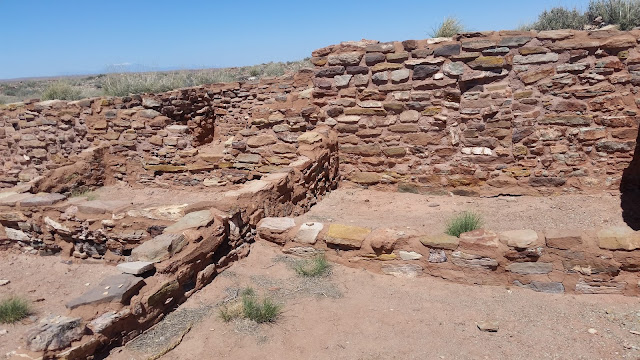 This Yellow Ring Necked lizard was hanging out on the ruins. 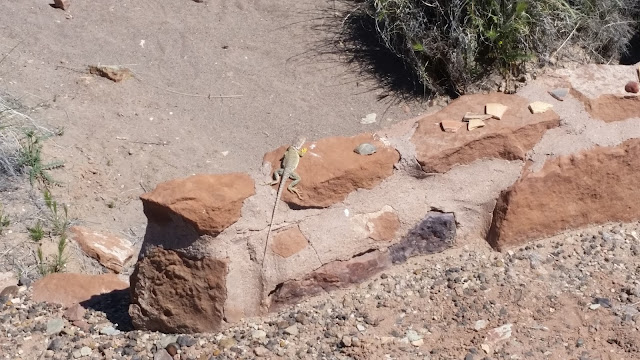 There is a rocky canyon near the ruins that had some petroglyphs. There was no sign telling me to go that way, I just went to check out the canyon and saw the petroglyphs. There were signs in front of them, so someone knows they are there. Most people would just miss them. 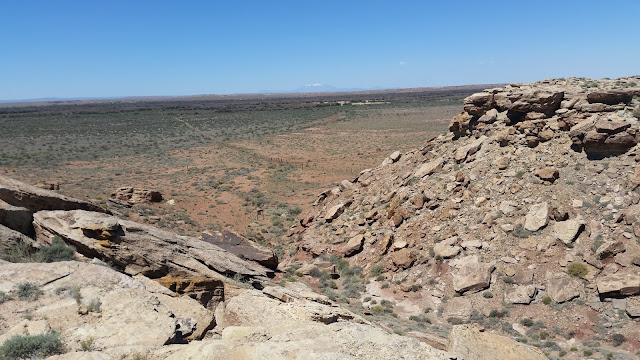 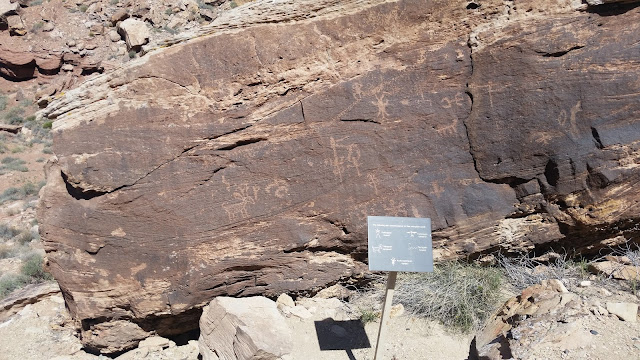 Kim watching me scramble around on the rocks. 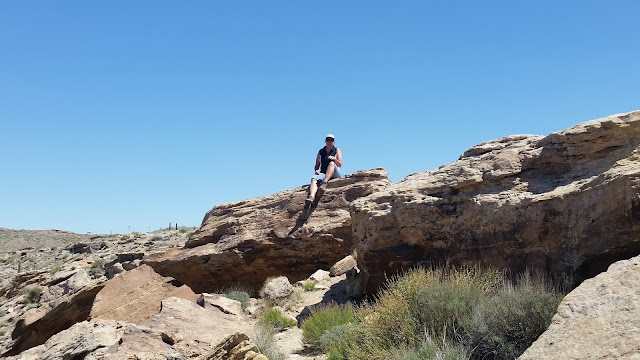 While I was scrambling around I saw a beehive built in the rocks. You could see the honey combs. 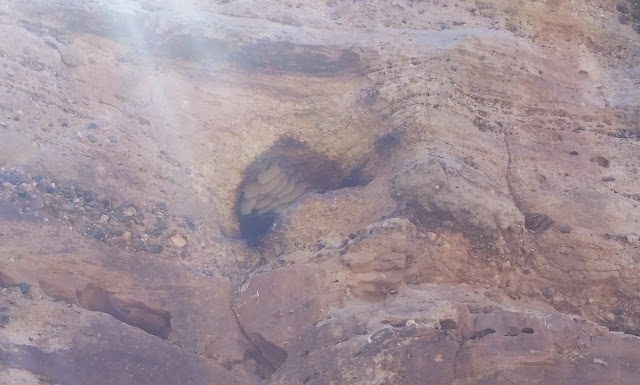 I really liked this area. 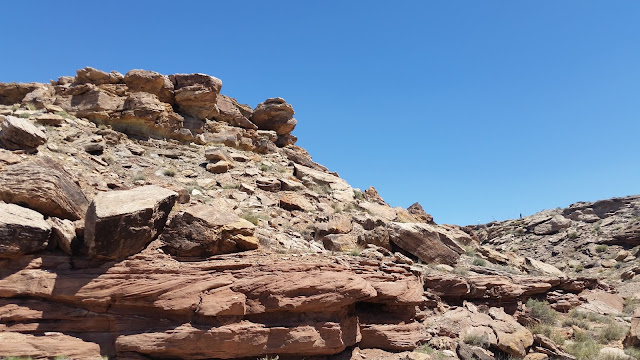 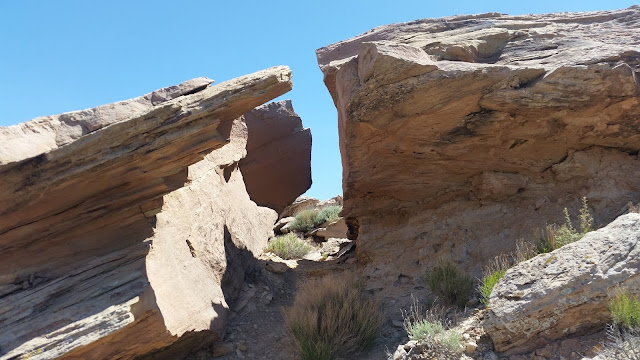 Here is another Yellow Ring Neck 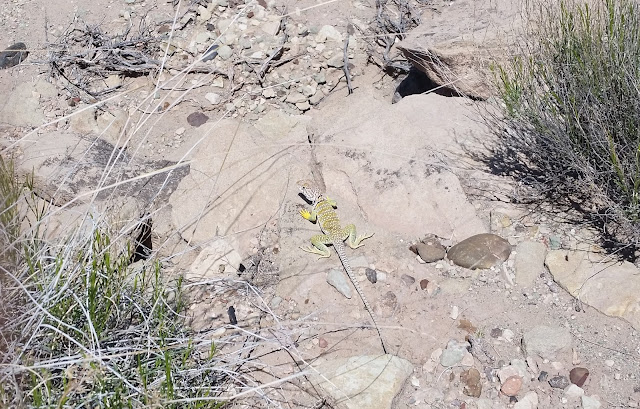 We toured Homolovi #1 on the morning of April 21. It was more of the same and was also very interesting. I just could not get over how easy it was to find these ancient pottery shards.

We went to town to hit Walmart and get Fuel. Then we went back to the camp site and got ready to move. We were only going about 60 miles. We wanted to find a camp spot to use as a base for our planned visit to the Petrified Forest National Park. I will write all about that visit in my next entry.